The Birth of Napoleon Bonaparte 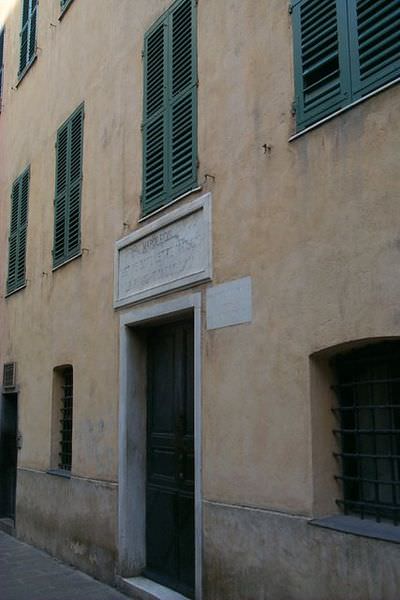 The house in Ajaccio, Corsica in which Napoleon Bonaparte was born.

Napoleon Bonaparte was born on Tuesday, August 15, 1769, in Ajaccio, Corsica. France had acquired Corsica from the Italian city-state of Genoa the year before. Napoleon’s parents were Carlo and Letizia (Ramolino) Buonaparte. Their first surviving child, Giuseppe (Joseph), was 19 months old when Napoleon was born. Two older children, born in 1765 and 1767, had died in infancy.

August 15 marks the celebration of the Catholic Feast of the Assumption of Our Lady the Virgin Mary. Letizia was at mass in the Ajaccio cathedral when she felt severe labour pains. She left the service and walked the short distance to her house (Casa Buonaparte, now a museum), aided by Carlo’s sister Gertrude Paravicini.

Here, on a couch in the salon – for there was no time to reach her bedroom – with the assistance of Gertrude and a maid-servant, Mammucia Caterina, she was delivered of her fourth child – a boy, with a big head and a very intelligent face, who screamed loudly, and soon began sucking his thumb, which was considered a good augury among the peasants of Corsica. (1) 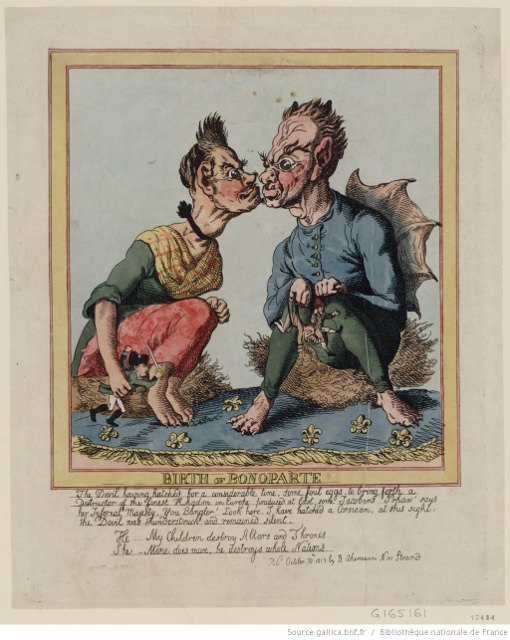 “Birth of Bonoparte,” caricature of Napoleon’s birth, published October 20, 1813 in London. “The Devil having hatched for a considerable time, some foul eggs, to bring forth a Destructor of the finest Kingdom in Europe produced at last some Jacobins. Source: Gallica.bnf.fr/Bibliothèque nationale de France

Nobody recorded anything about Napoleon’s birth at the time, and Letizia did not leave detailed memoirs. It wasn’t until Napoleon became a famous general that people became interested in his origins. Many myths sprang up surrounding his birth. The account above is generally the received one, originally printed in a 19th century biography of Letizia by Félix Hippolyte Larrey (son of Napoleonic military surgeon Dominique Jean Larrey). However even this can be disputed. Napoleon’s brother Joseph told Charles Ingersoll, one of his friends in the United States, that Napoleon was not born in the salon.

It has been published that Napoleon’s mother, taken with the pains of child-birth in church, brought him forth in her parlor, before she could reach her chamber. That story Joseph denied to me. (2)

Another myth claims that Napoleon was born or laid on a carpet or tapestry on which were woven scenes from The Iliad and The Odyssey, or – in another version – the conquests of Alexander the Great and Julius Caesar. Napoleon himself repeated the story of being born on a carpet when he was in exile on St. Helena.

[My mother] hastily turned back [from the church], got as far as her drawing-room, where she deposited me on an old carpet. (3)

When Letizia was asked about this in later life, however, she said:

It’s a fable, making [Napoleon] born on the head of Caesar! Did he need that? … Moreover, we didn’t have carpets in our houses in Corsica, even less in full summer than in winter. (4)

Even Napoleon’s birth date was contested. Some people argued that Napoleon had been born in 1768, and that Joseph was the younger of the two. The record of Napoleon’s baptism on July 21, 1771, confirms his August 15, 1769 birth. 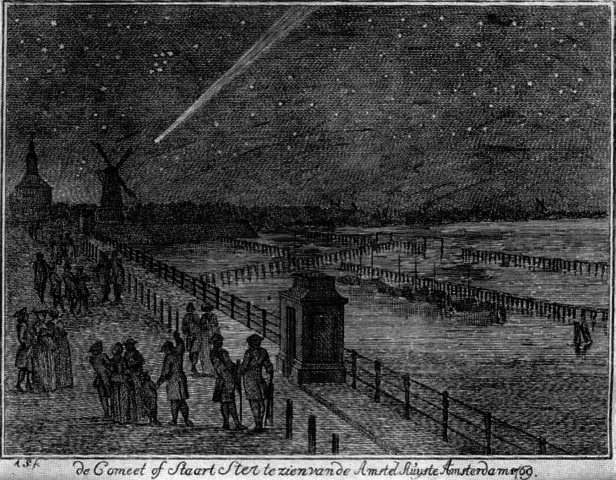 The Great Comet of 1769 over Amsterdam.

The one element of Napoleon’s birth that might appear to be mythical but actually is not is the appearance of a comet in the sky over Europe. This was comet C/1769 P1, first observed by astronomer Charles Messier at the Naval Observatory in Paris on the evening of August 8, 1769. According to observers, the comet became brighter through the month of August, with a lengthening tail. It made its closest approach to earth on September 10. Messier himself later sought to associate his comet with Napoleon’s birth, hoping to receive the Emperor’s attention and monetary support. This was, perhaps, Napoleon’s original “lucky star,” for which he searches the sky in Napoleon in America. As the comet has an estimated orbital period of around 2090 years, it has not been seen since 1769.

The Perilous Birth of Napoleon’s Son

18 commments on “The Birth of Napoleon Bonaparte”

She was delivered of her fourth child – a boy, with a big head and a very intelligent face, who screamed loudly, and soon began sucking his thumb, which was considered a good augury among the peasants of Corsica.