American folk hero Davy Crockett, known for his hunting skills and his defence of the Alamo, was also a politician. “Endowed with a good measure of common sense, an uncommon streak of pure honesty, and a warm sense of humor, Crockett was a natural for the rough-and-tumble, down-home brand of backwoods electioneering.” (1) In 1835, on his way to Texas, Crockett reportedly provided advice on how to get elected, based on his own experience. 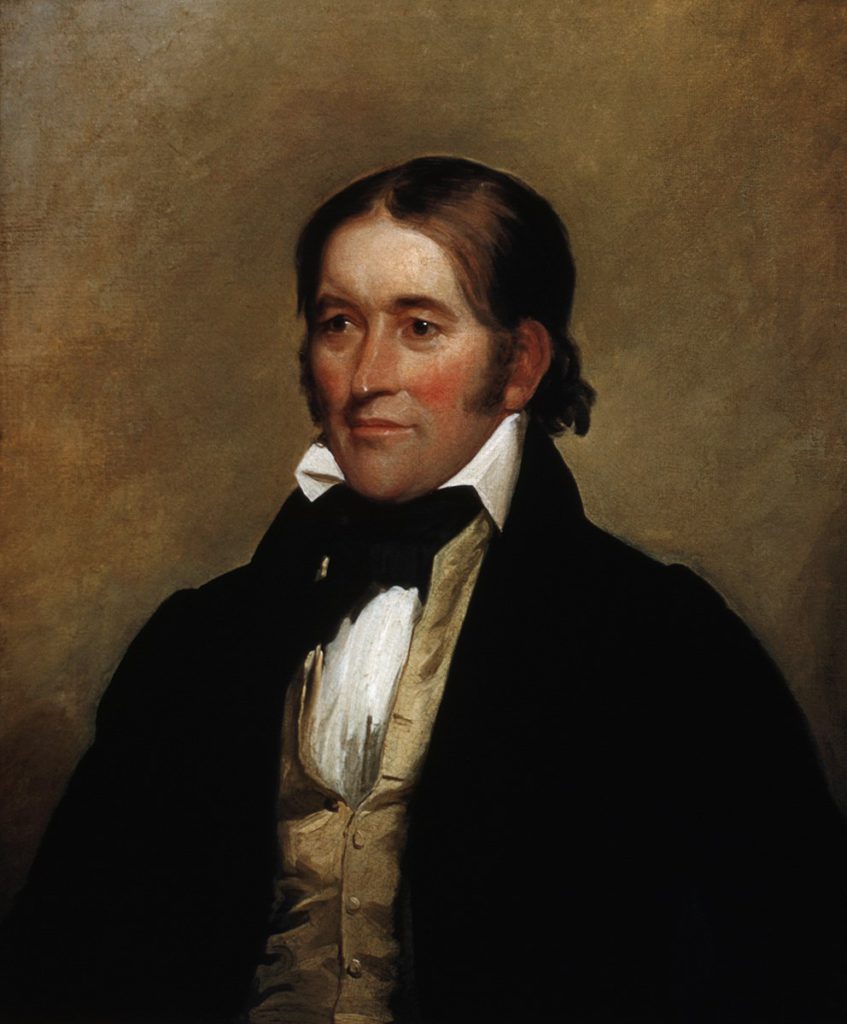 David (Davy) Crockett was born on August 17, 1786, in what is now Greene County, Tennessee. Davy’s father was of French-Huguenot descent; an ancestor changed the family name from Crocketagne to Crockett when emigrating to Ireland during the reign of King Louis XIV.

The Crocketts had nine children and no money, so Davy was hired out to help pay off the family’s debts. He became a skilled hunter, killing 105 bears in a single season. In 1813, he joined the Tennessee militia and fought in the Creek War in Alabama, acting as a scout because of his experience in the woods. In 1814, he re-enlisted as a sergeant. He served in Spanish Florida during the War of 1812, but saw little action.

Davy Crockett’s political career began in 1817, when he became a magistrate in Lawrence County, Tennessee. This was followed by posts as justice of the peace, town commissioner, and colonel of the local militia regiment. In 1821, Crockett was elected to the Tennessee state legislature.

His campaign style was simple and direct, and it fit well in an era in which political meetings usually opened with a barbecue and ended in a dance, with the candidates expected to buy drinks for everyone. (2)

In 1825, Crockett ran unsuccessfully for a seat in the US House of Representatives. In 1827, he tried again and was elected to Congress. Crockett opposed the policies of President John Quincy Adams and Secretary of State Henry Clay, who appear in Napoleon in America.  Although Crockett initially supported fellow Tennessee politician Andrew Jackson, who became president in 1828, he soon broke with Jackson, particularly over the Indian Removal Act of 1830. Crockett tried to champion the rights of impoverished farmers and squatters, but without wider support in Congress, he was unable to get any legislation passed. Crockett was defeated in 1831, re-elected in 1833, and then defeated again in 1835.

In November 1835, Crockett headed for Texas, where American settlers were attempting to achieve independence from Mexico. Crockett hoped to make some money and possibly rebuild his political career. He arrived in San Antonio in early February 1836. On February 23, a Mexican army reached San Antonio and laid siege to the Alamo, to which the Texians had retreated. Although Crockett had minimal experience as a soldier, his shooting skills proved valuable to the defenders. The siege ended on March 6, 1836, when the Mexicans overran the fort in the Battle of the Alamo. Davy Crockett died on that day, at the age of 49.

The Colonel Electioneering. Print with a man assumed to be Davy Crockett at the centre, drawn & engraved by H. Alken, circa 1834. Source: Library of Congress

In his autobiography, Davy Crockett wrote about how he wooed voters.

[W]hen I set out electioneering [in Tennessee in 1821], I would go prepared to put every man on as good footing when I left him as I found him on. I would therefore have me a large buckskin hunting-shirt made, with a couple of pockets holding about a peck each; and…in one I would carry a great big twist of tobacco, and in the other my bottle of liquor; for I knowed when I met a man and offered him a dram, he would throw out his quid of tobacco to take one, and after he had taken his horn, I would out with my twist and give him another chaw. And in this way he would not be worse off than when I found him; and I would be sure to leave him in a first-rate good humour. (3)

On his journey to Texas in November 1835, Crockett reportedly made the following remarks to some young politicians in Little Rock, Arkansas.

Attend all public meetings…and get some friend to move that you take the chair; if you fail in this attempt, make a push to be appointed secretary; the proceedings of course will be published, and your name is introduced to the public. But should you fail in both undertakings, get two or three acquaintances, over a bottle of whisky, to pass some resolutions, no matter on what subject; publish them even if you pay the printer – it will answer the purpose of breaking the ice, which is the main point in these matters. Intrigue until you are elected an officer of the militia; this is the second step toward promotion, and can be accomplished with ease, as I know an instance of an election being advertised, and no one attending, the innkeeper at whose house it was to be held, having a military turn, elected himself colonel of his regiment. … You may not accomplish your ends with as little difficulty, but do not be discouraged – Rome wasn’t built in a day.

If your ambition or circumstances compel you to serve your country, and earn three dollars a day, by becoming a member of the legislature, you must first publicly avow that the constitution of the state is a shackle upon free and liberal legislation; and is, therefore, of as little use in the present enlightened age, as an old almanac of the year in which the instrument was framed. There is policy in this measure, for by making the constitution a mere dead letter, your headlong proceedings will be attributed to a bold and unshackled mind; whereas, it might otherwise be thought they arose from sheer mulish ignorance. …

When the day of election approaches, visit your constituents far and wide. Treat liberally, and drink freely, in order to rise in their estimation, though you fall in your own. True, you may be called a drunken dog by some of the clean shirt and silk stocking gentry, but the real rough necks will style you a jovial fellow, – their votes are certain, and frequently count double. Do all you can to appear to advantage in the eyes of the women. That’s easily done – you have but to kiss and slabber their children, wipe their noses, and pat them on the head; this cannot fall to please their mothers, and you may rely on your business being done in that quarter.

Promise all that is asked…and more if you can think of any thing. Offer to build a bridge or a church, to divide a country, create a batch of new offices, make a turnpike, or any thing they like. Promises cost nothing, therefore deny nobody who has a vote or sufficient influence to obtain one.

Get up on all occasions, and sometimes on no occasion at all, and make long-winded speeches, though composed of nothing else than wind – talk of your devotion to your country, your modesty and disinterestedness, or on any such fanciful subject. Rail against taxes of all kinds, office holders, and bad harvest weather; and wind up with a flourish about the heroes who fought and bled for our liberties in the times that tried men’s souls. To be sure you run the risk of being considered a bladder of wind, or an empty barrel; but never mind that, you will find enough of the same fraternity to keep you in countenance.

If any charity be going forward, be at the top of it, provided it is to be advertised publicly; if not, it isn’t worth your while. None but a fool would place his candle under a bushel on such an occasion.

These few directions…if properly attended to, will do your business; and when once elected, why a fig for the dirty children, the promises, the bridges, the churches, the taxes, the offices, and the subscriptions, for it is absolutely necessary to forget all these before you can become a thorough-going politician, and a patriot of the first water. (4)

The legend of Davy Crockett

As a politician with an unusual background and a gift for storytelling, Davy Crockett became a celebrity during his lifetime. In 1831, a play called “The Lion of the West,” featuring a character called Colonel Nimrod Wildfire – a thinly-veiled caricature of Crockett – opened in New York to great success. In 1834, Crockett published his autobiography and went on a tour of Eastern cities to promote it, building on his image as a backwoods common man.

In 1835, the first in a series of Crockett almanacs was published. These consisted of tall tales and folksy sayings, interspersed with information on the phases of the moon and weather predictions. “Crockett emerged in the stories as an American Hercules – wading the Mississippi, steering an alligator up Niagara Falls, straddling a streak of lightning, wringing the tail of a comet, and kicking the sun loose from its frozen axis.” (5) The Crockett almanacs continued to be published until 1856.

In 1836, a book that claimed to be Davy Crockett’s journal was published under the title Col. Crockett’s Exploits and Adventures in Texas: wherein is contained a full account of his journey from Tennessee to the Red River and Natchitoches, and thence across Texas to San Antonio; including many hair-breadth escapes; together with a topographical, historical, and political view of Texas … Written by Himself. It was actually written by American playwright Richard Penn Smith. Largely fictional, it became hugely popular and influenced public perceptions of the Texas Revolution and Davy Crockett’s career.

Stories about Davy Crockett were reprinted and popularized through stage plays and – later – movies, television, and a comic strip. Many people are familiar with Crockett from a 1954-55 Disney television miniseries in which he was played by Fess Parker. The show had a memorable theme song, “The Ballad of Davy Crockett.” Crockett was also famously portrayed by John Wayne in the 1960 film The Alamo.

According to historian Paul Andrew Hutton, Davy Crockett “didn’t kill a bear when he was three, didn’t care much for fighting Indians, didn’t look like Fess Parker (in fact, portraits of him depict a stocky, middle-aged businessman), didn’t go down swinging Old Betsy at the Alamo (he left his favorite rifle in Tennessee, and yes, it’s true – he surrendered at the Alamo).” (6)

Since Crockett’s speech on how to win an election comes from Richard Penn Smith’s account, there’s a good chance that it was made up too.

Jim Bowie Before the Gaudy Legend

4 commments on “Davy Crockett on How to Get Elected”

Promise all that is asked…and more if you can think of any thing. Offer to build a bridge or a church, to divide a country, create a batch of new offices, make a turnpike, or any thing they like.