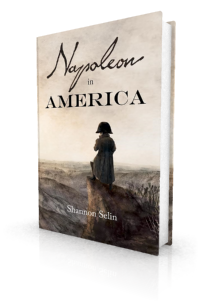 What if Napoleon Bonaparte had escaped from St. Helena and wound up in the United States in 1821?

A fantastic read for fans of French history and those who like ‘what if’ kind of stories; any fan of Napoleon will want to read this, too, and imagine a world where this might have happened.  Those new to speculative fiction should give this a try – it’s dangerously addictive! – Unabridged Chick

[A] thoughtful and totally believable account…. The author weaves…a rich and convincing tapestry, and does so with such subtlety and skill that the reader often finds himself wondering just what parts are real and what parts are not. – The Napoleonic Historical Society

We get insight into the kind of man that Napoleon was, the things he cares about, and his thoughts on his relationships with others. – A Bookish Affair

Napoleon in America…reads like a very well-written narrative of history. Given that the author is necessarily working with an entirely fictional world…the fact that she can create such an effect is quite remarkable. – The Literary Lawyer

I thoroughly enjoyed it and would recommend it to anyone interested in the history of the turbulent post Waterloo period. – Reflections on a Journey to St. Helena

If Robert Conroy’s alternate history novels are the fast food, this is a rare and original delicacy. – Alterhistblog

This is an excellent book…. Anyone who likes alternate history should find something to enjoy in this story. – Other Times

I couldn’t help but smile as I read it, and…I was a little saddened upon reaching the end. It had built so nicely, the denouement satisfying, and it left me wanting more. – A Knight of the Pen

The level of research and scholarship puts many non-fiction histories to shame. – The Napoleon Series

Former French Emperor Napoleon has been imprisoned on a dark wart in the Atlantic since his defeat at Waterloo in 1815. Rescued in a state of near-death by Gulf pirate Jean Laffite, Napoleon lands in New Orleans, where he struggles to regain his health aided by voodoo priestess Marie Laveau. Opponents of the Bourbon regime expect him to reconquer France. French Canadians beg him to seize Canada from Britain. American adventurers urge him to steal Texas from Mexico. His brother Joseph pleads with him to settle peacefully in New Jersey.

As Napoleon restlessly explores his new land, he frets about his legacy. He fears for the future of his ten-year-old son, trapped in the velvet fetters of the Austrian court. While the British, French and American governments follow his activities with growing alarm, remnants of the Grande Armée flock to him with growing anticipation. Are Napoleon’s intentions as peaceful as he says they are? If not, does he still have the qualities necessary to lead a winning campaign?

To buy Napoleon in America, click on the links below, or order it from your favourite bookseller.

Read an extract from Napoleon in America (PDF download)

Evocative and immersive.... A thorough, sweeping novel with seamless transitions from the real to the imagined.