The Story Behind Dr. Sym Goes to Heaven 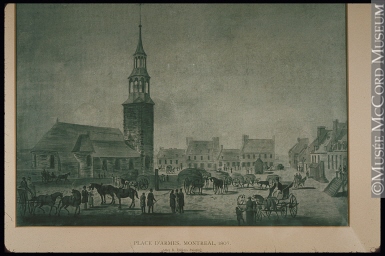 When I was doing research for Napoleon in America, I came across the following paragraph in the first volume of John Lambert’s Travels Through Canada and the United States of North America in the Years 1806, 1807 & 1808.

A singular instance occurred about the year 1807 upon the death of Dr. Syms at Montreal, who had attended the Hotel Dieu of that city, as physician, for upwards of sixteen years. At his decease the Hospital claimed and took possession of his body, for the purpose of burying it in their chapel, declaring that they had converted him to their communion, and that he died a Roman Catholic. Mr. McG-, the intimate friend of Dr. Syms, resolutely opposed these zealous ladies and demanded the Doctor’s body, in order that it might be interred in the Protestant burying-ground. The nuns stood out for some time, but were at length reluctantly obliged to part with their dear Doctor. They were, however, determined not to be deprived of doing honour to the soul of their convert, though his body was not in their possession. A coffin was accordingly procured, and carried with much pomp and ceremony into their chapel, where mass was said for the repose of his soul; after which the empty coffin was buried with great solemnity, the bells of the cathedral and chapel tolling during the whole of the funeral service. The holy sisters declared they had saved his soul, and it was of no consequence what became of his body. I was told that the Doctor had left a sum of money to the Hospital in his will. At all events the ladies were determined to honour his memory. (1)

I thought this was an interesting anecdote and wondered if, in fact, it had happened. Lambert was an Englishman visiting Lower Canada with his uncle. Though his volumes are generally considered realistic accounts of what he encountered, a number of the events described therein were not witnessed by Lambert directly, but told to him by people he spoke with in his travels. As Lambert did not reach Montreal until November 1807, that turned out to be case with this. I wanted to turn Lambert’s anecdote into a story (“Dr. Sym Goes to Heaven”) and, as with all of my stories, I wanted to base as much as possible on what I could find of the historical facts.

The first step was to find out if there was a Dr. Syms who died in Montreal around 1807. The answer was yes:

As you can see, there is discrepancy in the spelling of the doctor’s last name. I decided to go with Sym, based on the Gazette notice and the doctor’s listing in the 1807 Quebec Almanac, where he appears in the “Hospital Staff” section of a “List of His Majesty’s Forces Serving in Upper and Lower Canada” (as Robt. Sym, p. 80) and as one of the “Commissioners for the execution of an Act of the 40th Geo. III for the relief of Insane Persons and for the support of Foundlings: Montreal” (as Robert Sym, p. 20). There is also a list of “Surgeons appointed to examine those who request licenses, for the district of Montreal,” which includes a Richard Symes, who may or may not be the same person.

The next thing was to determine who the other characters were. We don’t know which “Mr. McG” was “the intimate friend of Dr. Syms” referred to by Lambert. There were several in Montreal at the time, as Scotsmen were prominent local merchants and fur traders. I decided to make him James McGill (October 6, 1744 – December 19, 1813), a name familiar to Canadians as the founder of McGill University. McGill and Sym undoubtedly knew each other – they were both from Glasgow, they had both lived in Montreal for at least 30 years, they both served on the commission for the relief of insane persons and the support of foundlings, and in 1799 Sym was obliged to McGill for a bond of 159 pounds. It’s not unreasonable to assume a close friendship.

The other characters fell in after that:

Then it was a matter of finding out as much as possible about the characters, the setting and the political climate of the time. Thanks to Lambert and other contemporary sources, I already had a good sense of the last two. I found corroboration of Dr. Sym’s deathbed conversion in É.-M. Faillon, Vie de Mlle. Mance et Histoire de l’Hôtel-Dieu de Villemarie, Vol. 2 (Montreal: Sisters of the Hotel Dieu, 1854). Robert Campbell’s A History of the Scotch Presbyterian Church, St. Gabriel Street, Montreal (Montreal: W. Drysdale & Co., 1887) was helpful, as were Stanley Brice Frost, James McGill of Montreal (Montreal & Kingston: McGill-Queen’s University Press, 1995) and (regarding Sister Céloron) Pierre-Georges Roy, La Famille d’Irumberry de Salaberry (Lévis, 1905).

Given this background, the rest was simply imagining how the incident described by Lambert might have played out.

The nuns stood out for some time, but were at length reluctantly obliged to part with their dear Doctor.