The Wreck of the Schooner Lively

The Lively, a schooner that many 19th-century Texans believed had been lost with all its passengers, did meet its end in a shipwreck, but not with loss of life. Here’s how events got conflated in early Texas folklore. 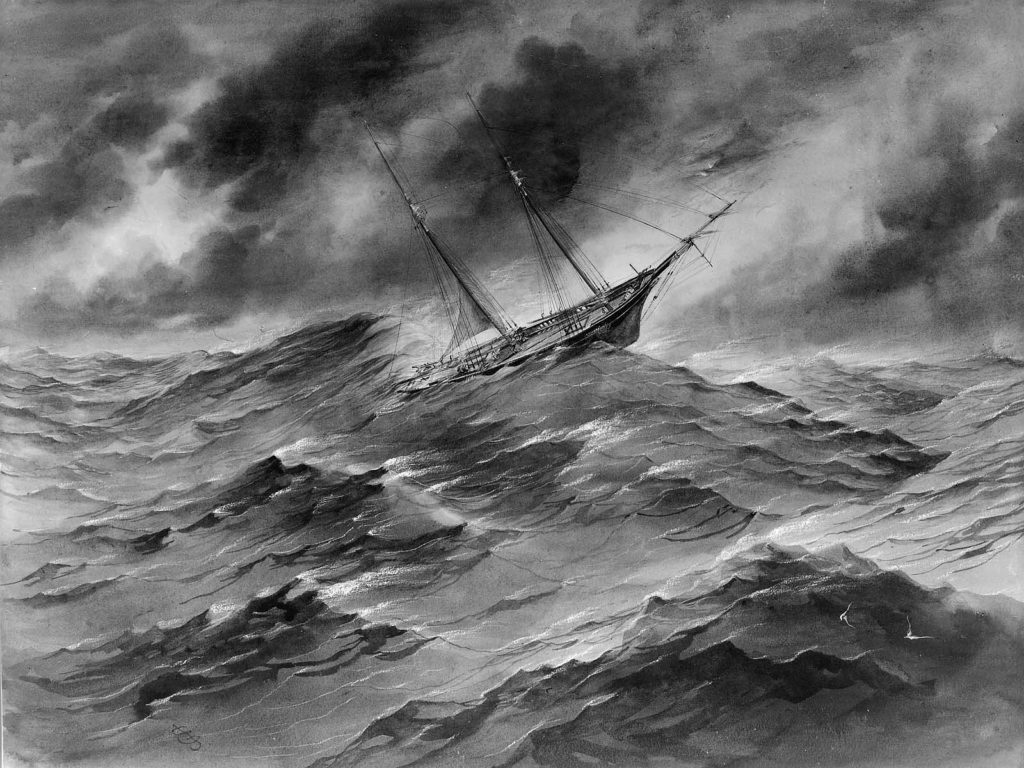 Schooner O. H. Booth in a Storm, 1862. Source: Museum of Fine Arts Boston. Gift of Maxim Karolik for the M. and M. Karolik Collection of American Watercolors and Drawings, 1800–1875

In 1821, Stephen F. Austin took up his father’s plan to settle 300 American families in Texas, which was then part of Mexico. Austin chose a tract of land between the Colorado and Brazos Rivers. In New Orleans, Austin and his business partner, Joseph H. Hawkins, purchased the Lively, a small schooner of thirty tons burden, for $600. The vessel was fitted out and loaded with provisions, tools, seeds and other supplies for the new colony. One of the passengers, William S. Lewis, described the provisions.

There were six sacks of salt, four barrels of mess pork, six barrels flour, three barrels Irish potatoes, a small cask of side bacon, several boxes and barrels of pilot and sea bread, a tierce of rice and lard, but little of which was put ashore when we landed…. (1)

The list of the passengers was as follows: The two Lovelaces [brothers Edward and Jackson], Stephen Holston, Young [James E.A.] Phelps, Mr. Harrison, Captain Jennings, Captain Cannon [in command of the vessel], Mr. Butler, and myself [William Lewis], making nine in all, to occupy the cabin, when there were but seven berths. The list of the other immigrants, as far as I can recollected, was as follows: Nelson, an engineer from New York, who came out on the ‘Feliciana’’; a Mr. James Beard, fifty years old; Beddinger, a small man forty years old; Mr. Wilson; Mr. Williams; Mr. Mattigan; Mr. Thompson, a carpenter; Mr. Willis; William, the servant of Mr. Harrison; a man named O’Neal; and two or three others whose names I have forgotten or never knew. (2)

The captain was instructed to sound the Texas coast and land in Matagorda Bay, at the mouth of the Colorado. Around the same time, Austin left New Orleans to travel overland to Texas, by way of Natchitoches with another group of colonists.

Austin’s party reached the Colorado River in late December. Austin proceeded downriver through the wilderness to meet the Lively, but the ship failed to appear.

[A]fter waiting nearly 3 weeks at that place and vicinity, subsisting on catfish and wild onions – without bread or salt [Austin] despaired of meeting his vessel and ascended the river to the la Bahia Crossing. There he met his brother [James] E. B. Austin and they proceeded on together with 20 men to San Antonio where he arrived on the 15 of March 1822 much fatigued and reduced in the flesh. (3)

Austin feared the Lively had been lost. In fact it had arrived in Texas, but not at the Colorado River.

We had gotten through the Rigolets and into the blue gulf. It had been threatening weather for two or three days. This overtook us about 12 o’clock our first night out, and for thirty-six hours there blew a terrible gale. We were driven, it was said, among the Bahamas, or some of the islands in that region, and when it ceased we were becalmed for a similar length of time. The wind was nearly all the time contrary, and then came another storm of wind and rain, and we did not reach the coast for over four weeks so as to make a landing or learn where we were, when finally we located ourselves in the neighborhood of the bay of Sabine. Having then a fine east wind, we sailed west and passed the opening of the bay of Galveston. We beat back and saw the mouth of the Brazos, but at the time did not suspect it to be a river. We returned to the entrance of Galveston bay. (4)

In late December, the Lively mistakenly landed its cargo and passengers at the mouth of the Brazos River. The ship then continued further along the coast to make soundings. Thinking they were at the Colorado, six or seven of the men started up the river in a boat to see if they could find Austin, while the rest remained to watch the stores. When the exploratory party returned six days later without news of Austin, the entire group moved upriver a few miles. They then spent three weeks building boats to carry the tools and supplies to a place more suitable for settlement. They soon exhausted their provisions and were dependent on hunting game for food. Around February 1, 1822, they embarked their goods on seven boats and worked their way up the Brazos to what is now Richmond, Texas. They built a large log house and planted a crop of corn. Unfortunately, there was a severe drought that year, so they did not reap the expected bounty.

Meanwhile, Austin had left for Mexico City to confirm his land grant. He was away for a year and a half, much longer than intended (see my post about Austin). Discouraged, many colonists returned to the United States, including most of the men from the Lively. Those who stayed in Texas included William Little, James Beard and James A.E. Phelps.

By early February 1822, the Lively was back in New Orleans, where it took on a second load of supplies and emigrants bound for Austin’s colony. The Lively sailed sometime between April and June and was wrecked on Galveston Island, with loss of cargo but no recorded loss of life. The passengers were taken off the island by the schooner John Motley and put ashore near the mouth of the Colorado River in June 1822. They left most of their provisions and property in the care of three men at the landing site. These men were reportedly murdered by Karankawas, who carried away or destroyed the goods belonging to the settlers. Galveston Island is where some of Napoleon’s followers fictionally wind up after a shipwreck in Napoleon in America.

Cargo from the Lively’s first voyage eventually reached San Antonio. Austin wrote from Mexico instructing his brother James to “sell the articles for cash or mules,” except for the trunks, which were to be kept safe until his return: “there are some things in one of them for the Governor and his Lady.” (5) Joseph Hawkins had earlier written to Austin wondering how he had been received “by those whose friendships we most need?”

Did the little presents to our friends meet the welcome hoped for? Did they please? Do they begin to believe we are something more than mere swinish multitude? Did the fair ones grow more fair and the kind ones more kind? (6)

On May 4, 1823, James wrote to Austin, advising that “[m]ost of the articles…sent out in the Lively the first voyage are disposed of in various ways….” Austin replied from Saltillo on May 10.

I am very glad Littleberry Hawkins took charge of the things from the Lively…. [I]f he still has the suit of blue request him to keep it until I arrive. I am destitute of clothes and want it. (7)

The legend of the Lively

The fact that the Lively did not meet Austin at the mouth of the Colorado River led to the rumour that the vessel and its passengers had been lost. According to William Lewis, “[i]t was said we were all lost in attempting to pass the bar at the mouth of the Brazos. Another story was that we had been murdered by the Indians.” (8)

Even though some of the original Lively passengers remained in Texas and had plenty of contact with other colonists, the rumour spread widely and became accepted as truth. It even made its way into some early histories of Texas. This error was not corrected until later in the 19th century. Historian Eugene Barker wrote:

Though the history of the Lively was well known to the early settlers, Austin’s failure to find the first immigrants and the subsequent loss of the vessel became confused in the memory of later arrivals. This accounts for the legend of its mysterious disappearance with all on board. (9)

2 commments on “The Wreck of the Schooner Lively”

Austin’s failure to find the first immigrants and the subsequent loss of the vessel became confused in the memory of later arrivals.