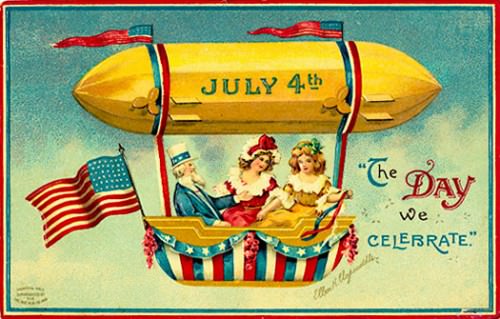 On July 4, 1821, in Napoleon in America, Mr. Renault puts on a balloon and fireworks display to honour Napoleon’s presence in New Orleans, and to celebrate “the liberty of our country.”

Such a display actually did take place – or at least was planned – for Independence Day in New Orleans in 1821. On May 28 of that year, Mr. Renault advertised in the Courrier de la Louisiane / Louisiana Courier as follows:

Mr. Renault has the honor of informing the inhabitants of New Orleans and its vicinity that on Sunday the 3rd of June he will start a Balloon 70 feet in circumference, with a gondole [sic] carrying off two figures of natural size. Immediately after there will be a fine display of Fire Works, which will terminate with a fine scenery, lighted by 2000 colored fire lances.

The Fire Works consist of:
1st. A caprice with variations and changes of color.
2nd. A spiral of flashing fire.
3rd. A fixed and wheeling sun.
4th. The sun, moon and stars.
5th. Mercury’s rod.
6th. The colored butterflies.
The whole preceded by rockets fired by three. The grand scenery shall be illuminated at once, by a Dragon fired by a lady. There will be a fine military band. The balloon will start just at sun set. Admittance 50 cents, half price for children.

Should Mr. Renault be so happy as to be rewarded for his trouble and expences [sic] he will give on the 4th of July another display of Fire Works in which will be seen the famous falls of Niagara, to be followed by an eruption of Mount Vesuvius.

Unfortunately, the show did not happen as planned. On June 8, the Louisiana Courier announced:

Mr. Renault has the honor of informing the public that in consequence of the bad weather last Sunday evening, the ascension of the balloon and display of Fire Works has been postponed until Sunday evening next, June 10th, when the same will take place at the usual place to the north of the Basin.

The bad weather apparently continued, as on June 15 a similar ad appeared, with the balloon and fireworks date changed to June 17. That display, too, must have been cancelled, as on June 22 the undaunted entrepreneur again advertised:

Mr. Renault, constantly opposed by bad weather, has seen himself again forced to postpone the ascension of his BALLOON until Sunday next the 24th inst. (St. John’s Day.) The public will have profited by the delay as it has afforded Mr. Renault the means of adding several new pieces to his Fire Works. The reiterated expences he has been at for a month back, the augmentation of the pieces composing his Fire Works, and the day on which the exhibition will take place, (weather permitting) induce him to hope that the public and his friends will defray him of the considerable expences he has been at.

Renault must have succeeded in that attempt, or maybe he ran out of money, as no further ads appeared in the weeks immediately following. So perhaps the July 4th Vesuvius eruption did not take place after all.

Mr. Renault and his fireworks are mentioned as far back as 1808 in Louisiana Courier advertisements. He also put on animal-baiting displays. One of his handbills from September 1817 promised, among other matches, a tiger against a bear.

If the tiger is not vanquished in his fight with the bear, he will be sent alone against the last bull, and if the latter conquers all his enemies, several pieces of fireworks will be placed on his back, which will produce a very entertaining amusement. (1)

There’s no word on whether, or how, that came off.

Mr. Renault has the honor of informing the inhabitants of New Orleans and its vicinity that on Sunday the 3rd of June he will start a Balloon 70 feet in circumference, with a gondole carrying off two figures of natural size.