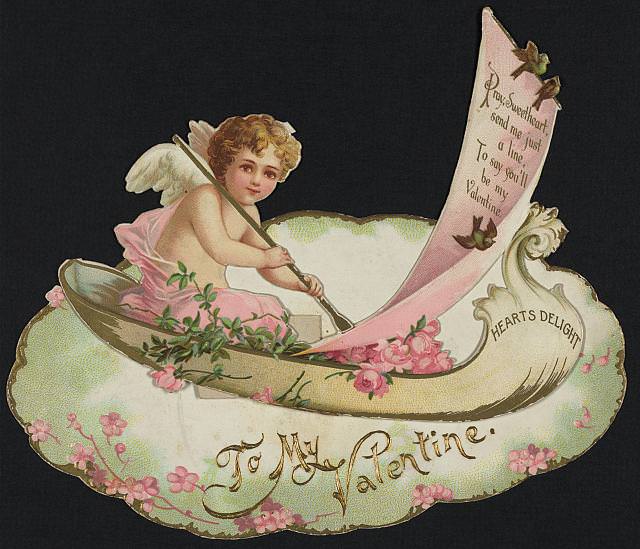 The custom of celebrating St. Valentine’s Day came to America with English and German settlers. Though mass-produced valentine cards did not appear in the United States until the mid-19th century, handmade valentines were exchanged as early as the Revolutionary War. Here’s a peek at how St. Valentine’s Day was celebrated in the early 19th century, as gleaned from American newspapers of the time.

The Origins of St. Valentine’s Day

We have been requested to state, for the benefit of this inquiring age, the origin and antiquity of the celebration of St. Valentine’s Day, or St. Valentine’s Eve – a celebration which appears to have experienced such a revival during the last few years in several of our cities and country villages. For the benefit of the ladies, and only for them, have we expended a little research on this highly important subject….

The feast corresponding with our St. Valentine’s Day was called Lupercalia by the Romans. A number of very singular ceremonies were observed by the ancients during that celebration, and many of them were uncouth and barbarous, though congenial to that age. It is said by some writers that Lupercalia was the name given to it, from the circumstance of a wolf being immolated on that occasion. Perhaps in these ancient days they considered a raw bachelor, just looking out for a spouse, as rude and rugged as that animal is known to be in the forest. The bachelors of the present day are, however, as respectable, agreeable, polite, attentive and gallant a set of animals as ever existed. The splendid preparations made for the ladies during the last week, in proving this, does them immortal honour.

From the Macon Telegraph (Georgia), January 30, 1830 (reprinting an article from the New York Courier).

We have ascertained the fact that the bachelors are moving around the city and actually making preparations for the celebration of St. Valentine’s Day…. They have positively crawled out of their flannels – trimmed their whiskers – shaved the growth of ages – straightened the vertebrae, and bound them up in cloaks, ten yards wide, to keep the cold weather at a distance during the approaching festival.

We had the greatest difficulty in the world to worm out of these fellows their movements. A love intrigue – a political movement, is as easily plucked out of the steeled hearts of the beau monde, or the costive heads of the politician. Yet we managed the matter to a miracle. It was done in this way. Several of the bachelors got married last summer. They actually went over to the enemy, as they call it in their fantastic language, ‘bag and baggage – scrip and scrippage.’ The awful ceremony of separating the button from the badge was performed before the blushing face of beauty. The committee, clad in the deepest mourning, with white kerchiefs and long faces, assembled on the occasion, and went through the official act with fear and trembling. ‘Have mercy upon us!’ said one shrivelled youth of forty. ‘Don’t spill blood!’ said another. ‘Spare the innocent victim,’ said a third. ‘The very heavens weep a few sad drops,’ said a fourth….

Around the room – or rather the chancel of the temple – were assembled the gay youth, the lovely maiden, the venerable parent, the aunt that writes her nieces’ birth day on the first leaf of the Bible, and the uncle that buys a drum on New Year’s day for his nevey. To them it was amusement and sport. Not so to the poor bachelors. They were losing their comrades by that fell ravager upon single blessedness – matrimony. They cut the button and turned their bleeding brother loose upon the world of nuptial love and blessedness. Yet they entreated the fair conqueror to permit the conquered to remain until their ranks could be filled up with recruits – for there are vacancies in the committee. Out of the abundant goodness of the female heart – the heart which is worth a kingdom, an empire, a continent – nay, the ‘great globe itself – they were permitted to stay on the committee during the present year. Accordingly, we desired a cousin to ask another cousin who had a second cousin who had married one of the committee, to worm out of her husband what the rogues – or as Mrs. Royall would call them – the delightful rascals were about. She coaxed and pleaded … and prayed and scolded…. It was done, and here is the result of her pious labour.

A regular meeting of the committee has been held, and their names called over – their strength mustered and marshalled for next month. A sub-committee has been appointed to taste the ‘wine and WITTLES,’ another to provide the music, another to decorate the ballroom of the City Hotel, another to prepare badges and devices, another to get up tickets and small arrangements. In short, everything is under way, and they are now gallantly marching onward to the ‘eighteenth.’ The beauty and splendour – the neatness and elegance of the occasion are to be of a superior order to any preceding one. We give the ladies fair warning to hold themselves in readiness. The picked youth of the city, such as will make loving husbands, kind fathers, and happy grandfathers, are to be present, if God prosper them. Every useful and elegant attraction will be collected in one choice spot; and every disagreeable banished to the unhappy desert of would-be good society. So the fair, like the ‘gallant Invincibles,’ are requested to ‘make ready.’

From the Maryland Gazette and Political Intelligencer (Annapolis), February 14, 1822, a poem entitled “To the Reader – On Valentine’s Day,” written by A. Bachelor.

The feathr’d Masters of the grove,
Devote this joyous day to love
And careless ’bout the wintry wind,
Each seeks a Partner, mild and kind,
His wayward destiny to share
Throughout the remnant of the year.
And why not I, whose constant heart,
Has long endur’d the pungent smart
Of shaft, in charms of Maiden fair,
Deep steep’d and deeper planted there,
This day, pray her from whom were ta’en
The poisons which the God’s dart stain,
In pity, her fair hand to give,
And thus, the aching wound relieve?
Reader, I’ll tell thee why – This charming Maid
Might grant the boon, and I’d be doom’d to WED.

Heed not the fop, who loves himself

From the Maryland Gazette and Political Intelligencer (Annapolis), March 12, 1818.

The first inventor of this custom [of celebrating St. Valentine’s Day]…must have been some benevolent female, who studied to encourage the intercourse of the sexes; for by such means intimacies might arise, productive of love and marriage engagements; or otherwise the first design of those lots was that those who shared in the dances and diversions might have their proper partners assigned, without hazarding the confusion & displeasure which must necessarily arise in the liberty of choice.

The following beautiful stanzas by Mrs. Robinson are an exception:

No tales of love to you I send,
No hidden flame discover,
I glory in the name of friend,
Disclaiming that of lover
And now while each fond sighing youth,
Repeats his vows of love and truth,
Attend to this advice of mine –
With caution choose a Valentine.

Heed not the fop, who loves himself,
Nor let the rake your love obtain,
Choose not the miser for his pelf,
The drunkard heed with cold disdain;
The profligate with caution shun,
His race of ruin soon is run,
To none of these your heart incline,
Nor choose from them a Valentine.

But should some generous youth appear,
Whose honest mind is void of art,
Who shall his maker’s laws revere,
And serve Him with a willing heart;
Who owns fair Virtue for his guide,
Nor from her precepts turn aside;
To him at once your heart resign,
And bless your faithful Valentine.

Though in this wilderness below
You still imperfect bliss shall find,
Yet such a friend shall share each woe,
And bid you be to Heaven resigned;
While Faith unfolds the radiant prize,
And Hope still points beyond the skies,
At life’s dark storms you’ll not repine,
But bless the day of Valentine.

The bachelors of the present day are...as respectable, agreeable, polite, attentive and gallant a set of animals as ever existed.