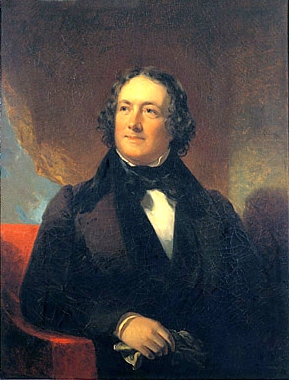 Nicholas Biddle, a friend of Joseph Bonaparte, was a prominent Philadelphia lawyer, politician, man of letters, gentleman farmer and the president of the Second Bank of the United States. As a young man, he encountered Napoleon in person. Biddle’s time in Europe persuaded him of the superiority of his own country. Biddle came to ruin in the 1830s Bank War with President Andrew Jackson.

Nicholas Biddle was born in Philadelphia on January 8, 1786 to a family whose ancestors had come to America with William Penn. Biddle’s father, Charles, was a wealthy merchant and the vice president of the Supreme Executive Council of Pennsylvania. Young Nicholas was extremely bright, so much so that he entered the University of Pennsylvania at age 10. When – upon completion of his coursework – he was denied a degree because he was so young, he went to Princeton, from which he graduated when he was 15. He then studied law.

In 1804 Biddle obtained a position as an unpaid secretary to General John Armstrong, a family friend who had been appointed the United States minister (ambassador) to France. Arriving in Paris in November, Biddle met James Monroe, who was there as a commissioner negotiating the Louisiana Purchase, as well as the Marquis de Lafayette, with whom Biddle formed a lasting friendship.

Nicholas Biddle was thrilled to see Napoleon at a military review. He wrote in his diary on November 18, 1804:

What a sight!! Not fifteen yards from me I beheld ‘the man before whom the world had trembled,’ the hero whose name has sounded in every quarter of the globe & who has rivaled if not excelled all that antiquity can produce of hardy valour and successful enterprise.… On the most majestic, the most elegant white horse I have ever seen, who as he went along the ranks seemed to fly rather than to walk, & who, as he now stood, seemed to regard with tranquil delight the scene before him on a saddle most richly furnished, sat the Emperor. In his dress, he seems to have desired to distinguish himself by simplicity. He had on a pair of white pantaloons, long boots coming over his knees, a plain blue coat, lined with red, two epaulets, and a plain blue cocked hat. He had a small riding whip in his hand. His hair is black & cut very short, he wears no whiskers. His face is somewhat long of a dark olive complexion, his eye hollow, but full of the expressive fire of genius, his nose long & his nostrils somewhat distended & black with the profuse use of snuff. He is now fatter than he has been for some time.…

He seemed somewhat tired of the ceremony. Two or three times he picked his nose very impolitely with his fingers, he gaped, & stroked his face. As soon as the last line passed him he jumped from his horse and came into the Palace…. There was also a diplomatic audience…. The Emperor spoke once in a low tone of voice. His voice is soft and mild. Twice Genl. Mortier laughed to Bonaparte on some occasion, but the Emperor did not smile. (1)

I was waked about 7 o’clock by the servant, and when I learnt the hour I was in despair for I was told I must be at the church by six. I made all possible haste sent for a carriage, none was to be found, set off on foot for Notre Dame. Arrived at the door I stood among epaulets & stars myself without sword or stiff collar & after about an hours standing, got in…. I…saw the Emperor before he was crowned in a very thoughtful position seated, bare, & surrounded with the Princes & great officers. The ceremony of coronation the Emperor walked to the other end of the church where was the throne & he took the oath. He then returned to the Pope to present to him the golden bread, and again returned to the throne…. What a sight was this for a philosopher. A little second lieutenant now wielded the Bourbon sceptre, a woman now occupied the place of Antoinette. (2)

In 1805, Biddle toured eastern France, Switzerland and Italy. In 1806, he went to Greece, where he became so enamored of classical literature and architecture that he later became known as “Nick the Greek” by his fellow Americans. Biddle then travelled along the Rhine and through Holland before arriving in England in March 1807. There he served as a temporary secretary to James Monroe, who was then the US minister to Great Britain.

Biddle’s time in Europe convinced him of America’s superiority, both in terms of its physical beauty (something he tries to persuade Napoleon of in Napoleon in America), and in political terms.

[N]o American can compare the institutions of his country with those of Europe without being grateful for its happiness, without exulting in its destiny, without adoring its freedom. (3)

No man admires his country more than I do. The only fault I can discover in its institutions is that remnant of Puritanism which renders our Sundays so sad and almost useless. It is peculiar to England and America… If I were the one great Being I should like to see my creatures gay and happy.… I hope one day to see this rubbed off. (4)

It seemed as if fortune had gathered all her gifts merely to scatter them.… That venerable pontiff, the chief of the Catholic religion, who had come from Rome to bestow on him the crown of Charlemagne, was now despoiled of his own kingdom and imprisoned by him, — that wife, the sharer of his humbler fortunes, and this day the partner of his throne, was divorced by him, and her place filled by a stranger – his kinsmen were all dethroned and banished or executed – the soldiers who had sworn allegiance, betrayed and deserted him – and he, the loftiest and proudest of them all, twice dethroned, twice exiled, perished alone in a wretched island, six thousand miles from the scene of his dominion and glory. That is the great moral lesson of our age. (5)

In the fall of 1807 Nicholas Biddle returned to the United States, where he continued his legal education. He was admitted to the bar in 1809. Besides his legal interests, Biddle had an affinity for literature and the fine arts. He contributed papers to several publications, including a prominent Philadelphia literary and political magazine called The Port Folio. When the magazine’s founder died in 1812, Biddle took over the editorship for two years, under the pseudonym Oliver Oldschool.

In 1810 Biddle was elected to the Pennsylvania state legislature. He also – at William Clark’s request – began editing the notes from the Lewis and Clark expedition to the Pacific Coast. Fearing he was neglecting his legislative duties by spending too much time on the project, Biddle relinquished his role in the publication in 1811. Thus he is not credited in the History of the Expedition of Captains Lewis and Clark (Philadelphia, 1814), though he did a considerable amount of work on the manuscript.

On October 3, 1811, Biddle married Jane Margaret Craig (b. April 6, 1793), the daughter of a wealthy Philadelphia ship owner and merchant. Though an accomplished and attractive young lady, Jane was exceedingly shy and modest. Her mother wrote of her:

She is so afraid of appearing singular or more dressed than other people that almost every other girl in the city is better dressed than she is and she sometimes goes really meanly clad whilst all her elegant clothes are lying in her drawers lest anyone should look at her. (6)

Jane was passionately fond of music. She played the harp and the piano, and was reportedly a good singer, though she herself did not think so. In 1832 she wrote to her husband regarding one of her musical parties:

I attempted a song, but as usual sung miserably, quavering all the time. (7)

[H]e is by far the most interesting stranger that I have ever known in this country. He is free and communicative and talks of all the great events and the great persons of his day with a frankness which assures you of his good nature as well as his veracity. (8)

the resort of the intellect of the country. John Quincy Adams, Webster, and the great politicians of the nation were entertained at [Biddle’s] dinners, when coruscations of wit, and bright sallies abounding with anecdote and information, were continually occurring to enliven these festive gatherings. They were the most agreeable symposiums imaginable… Mr. Biddle was an able converser, and possessed the great art of bringing out the information of his guests. (9)

Biddle loved to talk. He was an intensely social person and possessed great charm and good humour. He was known for his quips and amusing verses. He was also earnest and ambitious. Vincent Nolte referred to Biddle’s “limitless vanity.… The height to which he mounted made him dizzy; he fancied that his popularity and his moneyed influence could lift him to the presidential chair.” (10)

Nicholas Biddle and the Bank War

In 1814, Nicholas Biddle was elected to a four-year term in the Pennsylvania senate. Jane urged him to run for Congress, but Biddle lost. In 1819, his friend James Monroe – now President of the United States – made Biddle a director of the Second Bank of the United States. In 1822, Biddle became the Bank’s president.

Biddle successfully led the bank until 1832, when President Andrew Jackson vetoed the bill to renew the Bank’s charter. Jackson believed that the Bank – and thus Biddle – held too much power, though other powerful politicians, notably Henry Clay and Daniel Webster, supported the Bank. In 1833, in an attempt to undermine the Bank’s credibility, Jackson withdrew all the government deposits. He continued the “Bank War” until Biddle finally resigned his position in 1839. In 1841, the Bank closed, swallowing Biddle’s personal fortune.  The following year Biddle was arrested and charged with fraud.

Though he was acquitted of the charges, Biddle was deeply depressed by the Bank’s failure and his public disgrace. He retired to Andalusia – which, in the 1830s, he had renovated in Greek revival style – and devoted himself to farming. Biddle was a member of the Philadelphia Society for Promoting Agriculture, and Andalusia had long been the scene of his agricultural experiments, notably the cultivation of grapes. Biddle was also a member of the American Philosophical Society, the Philadelphia Academy of Fine Arts, the Historical Society of Pennsylvania and the American Philosophical Society. Biddle played an instrumental role in the establishment of Girard College, a boarding school for poor, orphaned or fatherless white boys founded with money bequeathed by Stephen Girard.

Nicholas Biddle died in Philadelphia on February 27, 1844, from clinical depression and bronchitis. He was 58 years old.

Jane never entirely recovered from Biddle’s death. She adored her husband. In 1832, when he persisted in staying at the Bank despite a cholera epidemic in Philadelphia, she wrote:

Would to God I could be near you, could I be certain that the disease would never reach this place I should not hesitate to remain with you in town, for much as I love my children, I often feel that without you the world would be a blank to me. (11)

The affection was reciprocated. Though he possessed at the time one of Philadelphia’s greatest fortunes, Biddle’s will – written in 1832 – consisted only of these words:

All that I possess in the world I hereby bequeath to her whom I most love in it, my dear wife as her sole and absolute property. (12)

Jane died on August 11, 1856, age 63. She and Biddle are buried in St. Peter’s Episcopal Churchyard in Philadelphia.

The Bumpy Coronation of Napoleon

Two or three times [Napoleon] picked his nose very impolitely with his fingers, he gaped, & stroked his face. As soon as the last line passed him he jumped from his horse and came into the Palace.