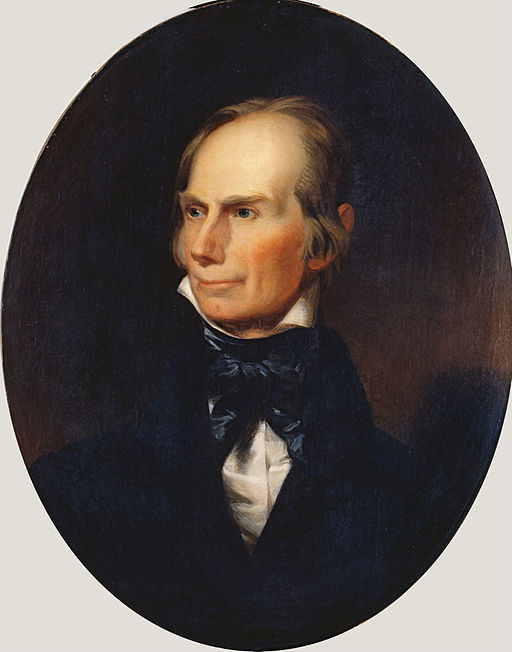 Henry Clay was a formidable 19th century American politician. Clay served as Speaker of the House of Representatives longer than anyone else in the 1800s, and was named one of the greatest senators in US history by a committee chaired by John F. Kennedy. Though Henry Clay never held the country’s highest office, he had as much impact on the United States as most presidents of his era. Clay was a strong supporter of Latin American independence and was also a friend of Joseph Bonaparte, which is how he winds up as a character in Napoleon in America.

Henry Clay was born on April 12, 1777 in Hanover County, Virginia, the seventh of nine children. His father – a Baptist minister – died when Clay was four. His mother remarried and had seven more children. Though he had little formal education, Clay was a sharp lad who showed an aptitude for the law. In 1797, he became a lawyer and moved to Lexington, Kentucky, where he became renowned for his legal skills and courtroom oratory.

On April 11, 1799, Clay married Lucretia Hart. “A very plain and unadmired woman,” she was “kind, good, and above all, discreet” and from a wealthy family. (1) Clay and Lucretia went on to have 11 children. In 1804, Clay began buying land for their plantation, Ashland, which at its largest was over 600 acres and had 60 slaves.

Besides his legal and farming careers, Clay embarked on a political career. In 1803, he was elected to the Kentucky General Assembly. In 1806, he became a senator for Kentucky, even though he was below the constitutionally-mandated age of thirty. In 1811, he became a member of the House of Representatives. Clay was chosen Speaker of the House on the first day of his first session, something never done before or since. Between 1811 and 1825, he spent 10 years as Speaker and greatly increased the power of the office.

Henry Clay was in London in the spring of 1815 when Napoleon escaped from Elba, returned to France and was defeated at the Battle of Waterloo. When, at a dinner party, it was suggested that Napoleon might have escaped to the United States, British Prime Minister Lord Liverpool asked Clay,

‘If he goes there, will he not give you a good deal of trouble?’

‘Not the least, my Lord,’ replied Mr. Clay, with his habitual promptitude – ‘we shall be very glad to receive him; we would treat him with all hospitality, and very soon make of him a good Democrat.’ (2)

Another version of this conversation has Clay saying:

Bonaparte will be quite harmless among us, where individuality is annihilated and an emperor will be a mere individual democrat, without the least monarchical or alarming personal power. (3)

It wasn’t Napoleon, but rather his brother Joseph Bonaparte who fled to the United States later in 1815. Henry Clay was there to greet him. Hotel rooms were in short supply, so Clay insisted that Joseph take his suite, though sources differ on whether this was at the City Hotel in New York or the Mansion House in Philadelphia. (4)

Clay thus became a friend of Joseph Bonaparte. In Napoleon in America, he also becomes a fictional friend of Napoleon. In real life, Clay was not an advocate of the Emperor:

Bonaparte, with his grenadiers, entered the palace of St. Cloud and, dispersing with the bayonet, the deputies of the people, deliberating on the affairs of the state, laid the foundation of that vast fabric of despotism which overshadowed all Europe. (5)

However, Clay thought the British were harsh in exiling Napoleon to St. Helena:

What had been the conduct even of England toward the greatest instigator of all the wars of the present age? The condemnation of that illustrious man to the rock of St. Helena was a great blot on the English name….On that transaction history will one day pass its severe but just censure. (6)

Clay was sympathetic towards the Bonapartists in America. He was in favour of Congress, in 1817, granting land to the Society for the Cultivation of the Vine and Olive for the French exiles to establish a colony in Alabama.

One of the reasons Henry Clay favoured the Vine and Olive Colony was that it would help establish an overland connection to Louisiana. This might help push American claims further west, in Texas, which was then under Spanish rule. Although the United States was officially neutral in the struggle between Spain and her colonies, Clay was strongly in favour of Latin American independence. He believed the Latin American rebels were emulating the great struggle the Americans had carried out against Britain in 1776. He wanted the US to take the lead in assisting them. Secretary of State John Quincy Adams insisted that the new regimes should give evidence of their stability before the US extended assistance or recognition.

In a speech in May 1821, Clay condemned the Administration’s wait-and-see policy. Adams responded on July 4 with a speech in which he said that that American policy was moral support for, but not armed intervention on behalf of, independence movements:

Wherever the standard of freedom and independence has been or shall be unfurled, there will [America’s] heart, her benedictions and her prayers be. But she goes not abroad in search of monsters to destroy. She is the well-wisher to the freedom and independence of all. She is the champion only of her own. She will recommend the general cause by the countenance of her voice, and the benignant sympathy of her example. (7)

Ironically Clay and Adams were thrown together by the 1824 presidential election. Andrew Jackson narrowly won pluralities of the popular and electoral votes, but not the necessary majority of the latter. Under the terms of the Twelfth Amendment, it was left to the House of Representatives to vote on the top three candidates: Jackson, Adams and William H. Crawford (who was put out of the running because of a stroke). Clay had come in fourth, but retained considerable influence as Speaker of the House. Clay’s dislike for Jackson led him to back Adams, who was elected on the first ballot. When Adams appointed Clay as Secretary of State, Jackson’s supporters were outraged and claimed that Adams and Clay had struck a “corrupt bargain.” This allegation contributed to Adams’ loss to Jackson in the 1828 presidential election.

Henry Clay was a congenial man with a lively wit. He enjoyed drinking, gambling, horse racing and flirting, although he and Lucretia were said to be devoted to each other. John Quincy Adams wrote of Clay:

According to the general rumor, he has more than once won and lost an affluent fortune at the gaming-table…. In politics, as in private life, Clay is essentially a gamester and with a vigorous intellect, an ardent spirit, a handsome elocution, though with a mind very defective in elementary knowledge and a very undigested system of ethics, he has all the qualities which belong to that class of human characters. (8)

He is a tall, thin, and not very muscular man; his gait is stately but swinging and his countenance, while it indicates genius, denotes dissipation. As an orator Mr. Clay stands high in the estimation of his countrymen, but I cannot say that he possesses much gracefulness or elegance of manner; his eloquence is impetuous and vehement; it rolls like a torrent but like a torrent which is sometimes irregular and occasionally obstructed…yet he has a great deal of fire and vigor in his expression…he very seldom fails to please and to convince. His mind is so organized that he overcomes the difficulties of the most abstruse and complicated subjects apparently without the toil of investigation or the labor of profound research…. The warmth and fervor of his feelings and the natural impetuosity of his character, which seems to be common to the Kentuckians, often, indeed, leads him to the adoption of opinions which are not at all times consistent with the dictates of sound policy. (9)

Mr. Clay is a man of an irritable and imperious nature, over which he has obtained a truly noble mastery. His moderation is now his most striking characteristic; obtained, no doubt, at the cost of prodigious self-denial, on his own part, and of that of his friends, of some of the ease, naturalness, and self-forgetfulness of his manners and discourse. But his conversation is rich in information, and full charged with the spirit of justice and kindliness, rising, on occasion, to a moving magnanimity….

Mr. Clay is sometimes spoken of as a ‘disappointed statesman,’ and he would probably not object to call himself so; for it makes no part of his idea of dignity to pretend to be satisfied when he is sorry, or delighted with what he would fain have prevented; but he suffers only the genuine force of disappointment, without the personal mortification and loss of dignity which are commonly supposed to be included in it. He once held the balance of the Union in his hand, and now belongs to the losing party: he more than once expected to be President, and has now no chance of ever being so. Thus far he is a disappointed statesman; but at the same time, he is in possession of more than an equivalent for what he has lost – not only in the disciplined moderation of his temper, but in the imperishable reality of great deeds done. (10)

Henry Clay had a long and illustrious career. He returned to the Senate for 1831-42 and 1849-52. In 1832 he again stood for the presidency, but lost to Jackson. In 1844, Clay lost again, this time to James K. Polk, in an election that turned on whether Texas should be admitted as a state. Clay was opposed because he believed it would provoke the slavery issue and lead Mexico to declare war. He was proved right, as the US annexation of Texas led to the Mexican-American War of 1846–1848, in which one of Clay’s sons was killed. In addition, the extension of slavery into Texas increased tensions between North and South.

[Clay] owes less of his greatness to education or to art than any man living… He is independent alike of history or the schools; he knows little of either, and despises both. His ambition, his spirit, and his eloquence are all great, natural, and entirely his own…. He has never studied models, and if he had, his pride would have rescued him from the fault of imitation. He stands among men in towering and barbaric grandeur; in all the hardihood and rudeness of perfect originality; independent of the polish, and beyond the reach of art. (11)

Henry Clay’s body was the first to lie in state in the rotunda of the US Capitol. Abraham Lincoln delivered Clay’s eulogy (you can read it here). Clay had an elaborate funeral (for details, see the excellent article by Sarah J. Purcell entitled “All That Remains of Henry Clay” on the Common-Place website). Seven of Clay’s children predeceased him. Clay’s wife Lucretia died in 1864 at the age of 83. She and Clay are both buried in the Henry Clay monument at Lexington Cemetery.

For more about Henry Clay, see the Ashland website. If you’re interested in American history, his career is worth reading about.

In politics, as in private life, Clay is essentially a gamester and with a vigorous intellect, an ardent spirit, a handsome elocution, though with a mind very defective in elementary knowledge and a very undigested system of ethics.