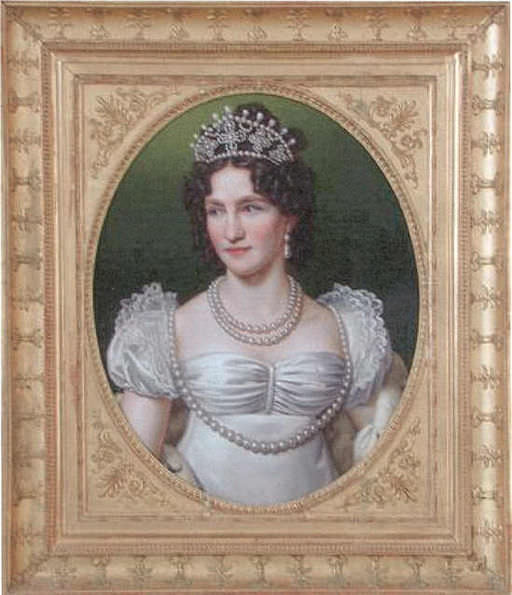 Caroline Augusta of Bavaria, Empress of Austria, around 1816

Caroline Augusta was a Bavarian princess who became Empress of Austria thanks to an arranged marriage with Emperor Francis I. Much younger than her husband, she became a “second mother” to Francis’s grandson, Franz, who happened to be Napoleon’s son, Napoleon II. Pious, well-educated and good-hearted, Caroline tried to bring warmth and enlightenment to the boy’s life in the Viennese court.

Caroline Augusta of Bavaria was born in Mannheim to a German noble family on February 8, 1792. Her mother, Princess Augusta Wilhelmine of Hesse-Darmstadt, died when Caroline was four years old. Her father Maximilian, a member of the Bavarian House of Wittelsbach and a general in the Austrian army, remarried. In 1806, due to an alliance with Napoleon Bonaparte, he became King of Bavaria.

The elevation of Bavaria to a kingdom was part of a bargain in which Caroline’s older sister Augusta married Napoleon’s stepson, Eugène de Beauharnais, the son of Napoleon’s first wife, Josephine.

Caroline Augusta’s marriage was also arranged, at age 16, to 26-year old Prince William of Württemberg. They wed on June 8, 1808 in Munich. Her husband regarded it as a purely political match and reportedly told Caroline that they were victims of politics. He avoided her as much as possible, and the marriage was never consummated. In 1814, once Napoleon’s abdication rendered the reason for the union moot, the marriage was annulled. This left Caroline, a devout Catholic, free to marry again without the threat of excommunication.

Caroline Augusta’s second match was also a political marriage, but a step up. On October 29, 1816, at the Church of St. Augustin in Vienna, she married Francis I, Emperor of Austria and King of Hungary and Bohemia. She was Francis’s fourth wife, and 24 years his junior. Having three times become a widower, Francis thought he deserved a younger wife. His brother, Grand Duke Ferdinand III of Tuscany, was also vying for Caroline Augusta’s hand.

The Empress is only twenty four years of age, although her appearance denotes her at least past thirty. Every one gives her the highest character for her amiable temper, and manners, and innumerable good qualities; but her Imperial Majesty’s appearance is certainly not prepossessing, after her predecessor, whose peculiar grace and affability were so very striking. (1)

Another English diplomat, Frederick Lamb, said Caroline Augusta was “ugly, clever and amiable, and as the Emperor expresses it: ‘She can stand a push, the other was nothing but air.’” (2)

The new Empress was popular with the Austrian people. She took an interest in their welfare, founding several hospitals and residences for the poor. Under the influence of her religiosity, a devotional air pervaded the court.

In the absence of children of her own, Caroline Augusta became attached to Francis’s grandson, Napoleon II, known in Austria as Franz, the Duke of Reichstadt. The son of Napoleon and Francis’s daughter Marie Louise, the boy had been moved to the Viennese court in 1814, at age 3. Caroline Augusta adored young Franz, whom she nicknamed Fränzchen, as she calls him in Napoleon in America. In a letter to the boy’s governor, Maurice Dietrichstein, dated July 17, 1821, the tutor Mathias de Collin described the Empress as the boy’s “protectress.” (3) Marie Louise wrote that same year: “He [Franz] is the idol of my father and of the Empress, who is like a second mother to him.” (4) In letters, Caroline Augusta addressed Franz as “Dearest Frankie” and “my dear little son,” and signed herself “Your very loving grandmother.” (5)

Caroline Augusta took a keen interest in Franz’s education. She – along with her husband – liked to sit in on his exams.

Our Empress was as distinguished by her education as by her cast of mind and the nobility of her sentiments; her affection for our young prince was extremely useful to his progress; she often kept him near her, liked to talk with him, to cultivate his reason through enlightened conversation. She often made him her reader; he thus went through works in which she taught him to discuss composition and judge its merits, while commenting with tact and finesse. (6)

Whether Franz enjoyed this attention is hard to say. We catch glimpses of Caroline Augusta in his diary, as in this entry of August 23, 1823.

After lunch we went on horseback to Kleehof. My grandmother again rode ‘Little Regent,’ who, the other day on the way to Mariataferl, suddenly balked and would not go forward…. Behind my grandfather came Uncle Anton, and behind him Uncle Ludwig, then my mother and I behind [Marie Louise’s lady in waiting]. As it was beginning to grow cool, Colonel Eckard trotted up with my grandfather’s overcoat. Grandmother told the postilion who was riding beside her to help grandfather put it on, and as she pulled her horse up too sharply, he reared and stumbled. … I pulled up my horse and jumped to the ground. We all ran to my grandmother. Fortunately she had not hurt herself, having only skinned her arms a little, and she immediately mounted another horse. (7)

Caroline Augusta and Emperor Francis gave Franz a Catholic book of prayers, Saintes Harmonies by Joseph Stanislaus Albach. They wrote this inscription, followed by their names:

In every event of your life, in each inner struggle of your soul, may God give you His light and His strength. That is the ardent prayer of two who love you. (8)

This book is very dear to me. These lines, written by parents whom I respect and cherish, are priceless to me. (9)

Neither Caroline Augusta, nor the Emperor, were with their grandson when he died in 1832 at the age of 21 (see “The Death of Napoleon’s son, the Duke of Reichstadt”).

She was pale and haggard. She spoke to me in touching terms of our adored Emperor… She told me that she almost died the night he was carried to his room in the chapel where he was to be exposed. She talked much about the Emperor’s last moments. … The courage she displayed gives strength. (10)

Caroline Augusta became the Empress Dowager of Austria. She remained close to the imperial household, especially since her half-sister, Sophie, was married to Francis’s son, the Archduke Franz Karl. Their son, Franz Joseph, ascended the imperial throne in 1848.

Caroline Augusta died on February 9, 1873, one day after her 81st birthday. She is buried in the Imperial crypt of the Capuchin Church in Vienna.

Every one gives her the highest character for her amiable temper, and manners, and innumerable good qualities; but her Imperial Majesty’s appearance is certainly not prepossessing,