The Imperial Crypt of the Habsburg family, known in German as the Kaisergruft, or Kapuzinergruft (Capuchin Crypt), lies beneath the Capuchin Church and monastery in Vienna, Austria. The crypt contains the remains of 150 people. The oldest tombs are those of Empress Anna (1585-1618) and Emperor Matthias (1557-1619). The most recent are those of Otto von Habsburg (1912-2011) and his wife Regina (1925-2010). In style, the tombs range from simple caskets to elaborate Baroque sarcophagi. The largest is that of Empress Maria Theresa (1717-1780) and her husband, Francis Stephen (1708-1765). The only non-Habsburg in the crypt is Maria Theresa’s governess, Countess Karoline von Fuchs-Mollard. 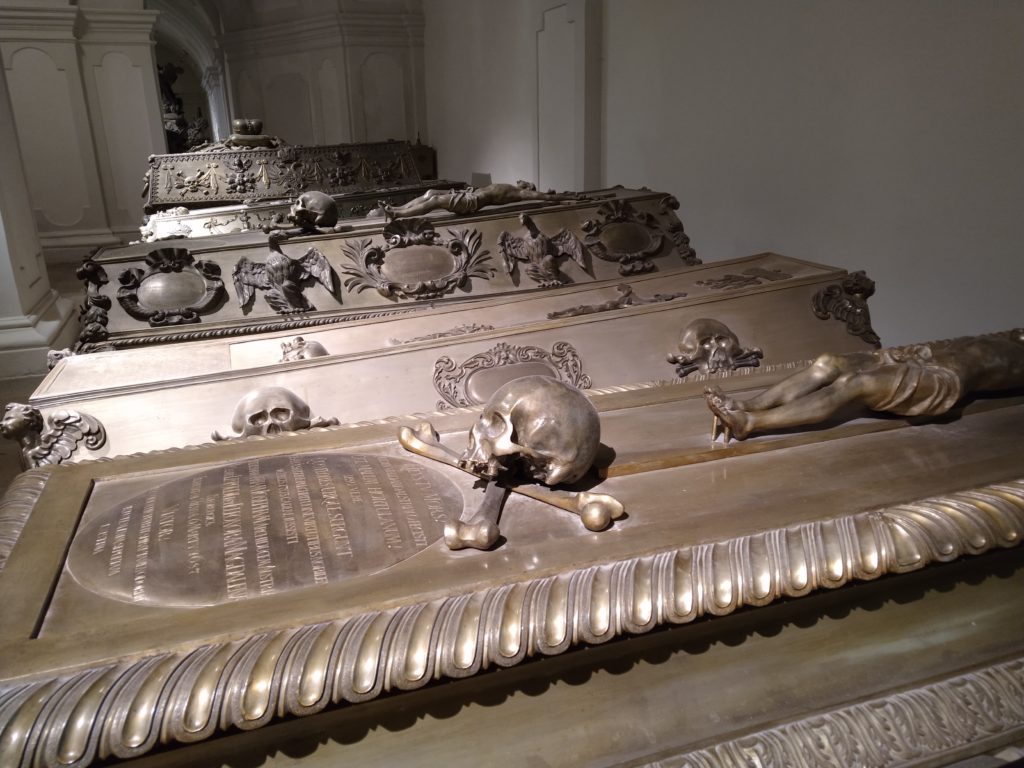 The Habsburg Imperial Crypt in Vienna

Visiting the Imperial Crypt in 1837

Today the tomb that receives the most visitor attention is that of Empress Elisabeth, also known as Sisi, the wife of Emperor Franz Joseph (1830-1916). She was assassinated in Geneva in 1898. In 1837, the year that Sisi was born, English writer Frances Milton Trollope paid a visit to the Imperial Crypt. At that time, Emperor Francis I (1768-1835) was the star exhibit. He was the father of Napoleon’s second wife, Marie Louise, who is also buried in the crypt.

This day is the one known in the Romish calendar as that of ‘La fête des Morts,’ or, as the Germans call it, ‘Poor Souls’ Day.’ The churches are all hung with black; no music is heard within them, but masses for the dead are solemnly murmured before every altar throughout the city. It is in vain that innumerable waxen tapers, of all sizes, colours, and shapes, expend their votive light around a hundred shrines; the gloomy hangings seem too mighty for them, and the air of dark and solemn sadness is universal. Every shop is shut, and the entire population appear to have given up their spirits to mourning. The churches in all parts of the city have been crowded during the whole day; yet, nevertheless, multitudes have wandered to the cemeteries without the town, to visit the graves of friends recently lost.

The great point of general interest, however, is the crypt of the church belonging to the convent of the Capuchins, for there lie interred the imperial family of Austria. The vaults are on this day open to the public; and we have spent a considerable time within their gloomy recesses, both for the purpose of looking ourselves at this receptacle of the royal dead, and for that of watching the use made of this annual pilgrimage by the people.

Seventy-three bronze coffins are ranged in solemn array around the walls. Some of these are extremely simple, and others in the highest style of magnificence. That of the Emperor Francis the First of Germany, and his consort, Maria Theresa, (for one sarcophagus contains them both,) was erected by the illustrious woman whose bones rest within it, and is, I think, the most splendid of the collection. But the crowd of pilgrims who came, upon this day, to gaze upon the coffin that contains their idol the late Emperor, Francis the First of Austria, was too numerous to permit any very accurate examination of them.

Were I simply and fully to describe to you the strong emotion manifested by the throng, still passing on, but still renewed, when at length they had won their way across the imperial sepulchre to the grating which gave them a sight of the Emperor Francis’ coffin, you would hardly give credence to the truth of my tale. You would not think it false, but you would suspect that it was exaggerated; and as, on the other hand, I feel sure of falling short of the truth from mere want of power to do justice to a scene so singular and so affecting, I think I must leave you without any description of it at all.

And yet, perhaps, of all the spectacles I have ever witnessed it was the most striking! . . . . The old and the young, the rich and the poor, pressed on together to the tomb of their common father; neither sex, age, nor condition were observed in this unparalleled mêlée of general emotion; and I believe truly, that of all the multitude who thronged that dismal vault, we alone profited by the light of the torches which made its gloom visible, for the purpose of looking on as mere spectators of the scene. We watched tears stealing down many a manly cheek from eyes that seemed little used to weeping, and listened to sobs that spoke of hearts bursting with sorrow and remembered love, beside the tomb of one who had already lain there above two years – and that one an Emperor! . . . . Between him and the people that thus freshly weep for him, there must have been a tie more closely drawn than we, in our land of freedom, can easily understand. Does not all this seem to you like something more than the simple truth? Yet, so far from having painted the scene too strongly, I am quite sure that what I have said can convey to you no adequate idea of its solemn interest, its deep pathos, and its strange sublimity.

We have passed this evening at a party, where I mentioned to several persons how greatly the strong emotion we witnessed in the royal catacombs surprised me. The answer was the same from all: ‘Had you known the Emperor, it would have caused you no astonishment.’ . . .  ‘Would it surprise you,’ said a lady of the party, ‘to see children weeping upon the grave of their father? . . . . Our Emperor was more than a father to us.’

All this is so new, and so strange to me, that I feel as if I had got into a new planet. The only sentiment with which I have been hitherto acquainted (and this has been only by tradition) that at all approaches to that which I hear expressed by the people of this country for their sovereign, is the feeling of love and devotion borne by the brave Scottish clans of yore to their chieftains. I have often lamented that the changes which time has wrought in the ancient framework of our social relations should have swept away a sentiment so generous, so useful, and, as I think, so natural. But here I find it again in perfection, only upon a far nobler scale; and the indications of it are so genuine, and its influence so evidently tending to ennoble the nature of the social compact which binds men together for their common safety and advantage, that . . . .

But I must not go on. If I pursue this theme I shall run a risk of uttering treason, even against the beautiful constitution of our glorious England as it stood before those stabs and thrusts were made which have of late so grievously disfigured it; but all that has happened to us since, has so mystified and obscured the features of this once worshipped but mouldering idol of all English hearts, that it is no great wonder if, seeing elsewhere what is good, we should almost forget that the time has been when we possessed what was better still. (1)

The Imperial Crypt is open to visitors every day. See the Kapuzinergruft website for details. 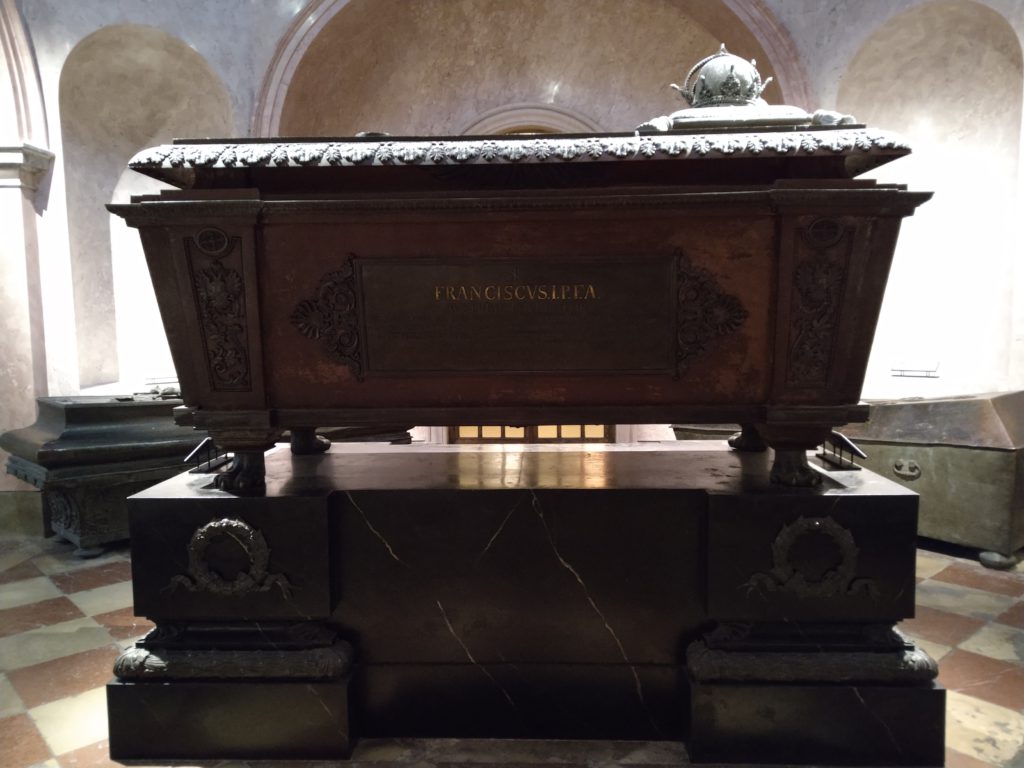 The tomb of Emperor Francis I of Austria

As part of the burial procedure of the Habsburgs, the heart and inner organs were removed from the body and interred separately. Fifty-four Habsburg hearts sit in silver urns in the Hapsburg Heart Crypt (Herzgruft), which is a vault within the Loreto chapel of the Augustinian church, next to the Hofburg Palace in Vienna. The oldest heart in the vault is that of Empress Anna; the most recent is that of Archduke Franz Karl (1802-1878). He was the son of Emperor Francis I and the father of Emperor Franz Joseph. The heart of Napoleon’s son, the Duke of Reichstadt (Napoleon II, 1811-1832), is also interred in the vault. The Loreto chapel is open to the public only once a week, after mass on Sundays (about 12:45 pm). After listening to a talk in German, visitors can peer through a grate at the two rows of urns. 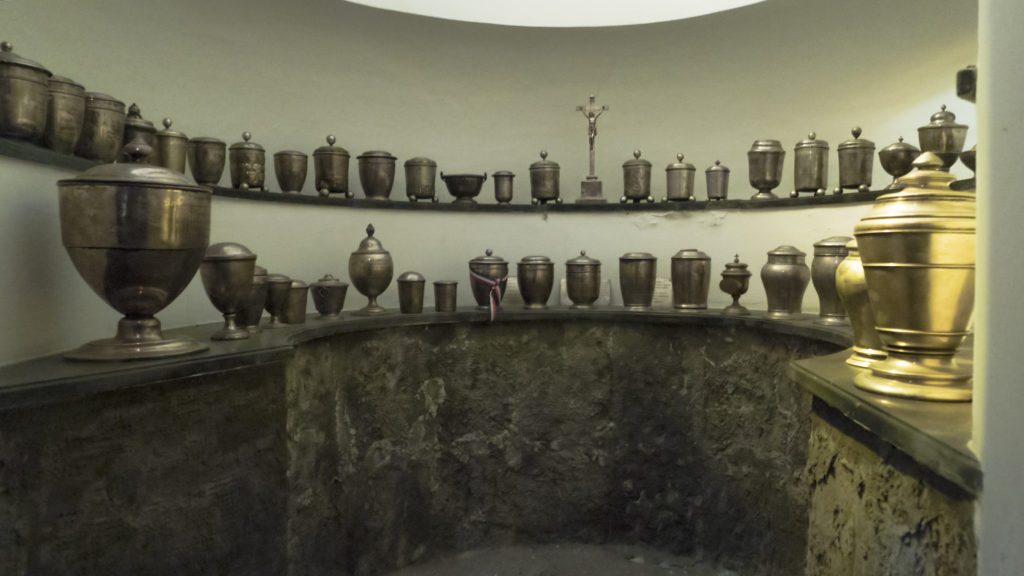 The Habsburg Heart Crypt. The urn containing the heart of Napoleon’s son is encircled by a red, white and blue ribbon, in the middle of the second shelf.

Additional bodies, hearts, and internal organs of the Habsburgs are interred in the Ducal Crypt below St. Stephen’s Cathedral in Vienna. For details on visiting the crypt, see the St. Stephen’s website.

The vaults are on this day open to the public; and we have spent a considerable time within their gloomy recesses, both for the purpose of looking ourselves at this receptacle of the royal dead, and for that of watching the use made of this annual pilgrimage by the people.