Though not as well-known as Napoleon’s last words, here are the reported last words uttered by some of the other famous historical figures who appear in Napoleon in America. 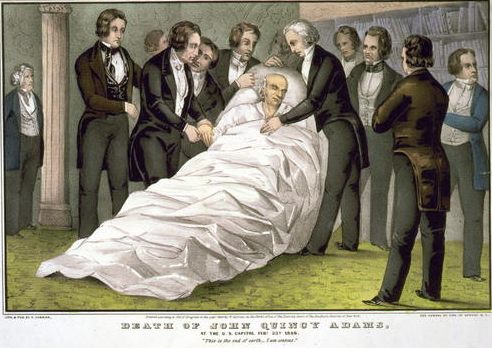 King of France. Died suffering from obesity, gout and gangrene at the Tuileries Palace in Paris on September 16, 1824, at the age of 68. Louis XVIII had a long, slow decline, and many of the things he is claimed to have said in his dying days sound like official propaganda. The most credible account is from his good friend Madame du Cayla. She wrote that after receiving the last rites on September 13, Louis said goodbye to his family, expressed his regrets at leaving them, and told them to remain united and to love each other in good fortune as well as bad. He said, “I bless you; may God bless you too.” He then said to the Duke of Bordeaux, the three-year-old grandson of Louis’s brother and successor, the Count of Artois:

May you, my child, be wise, and happier than your parents. (1)

French general and politician, noted for his courage during the French Revolutionary and Napoleonic Wars. Died of an aneurism of the heart in Paris on November 28, 1825, age 50.

The nearer the fatal moment approached, the more did his kindness manifest itself to those around him. Wishing again to breathe the pure air, and see once more the light of the sun, his nephews carried him in a chair to the window, which was open; but feeling himself sinking, he said to them: ‘My good friends, put me upon the bed, God will do the rest.’ These were his last words. Two minutes after, his body rendered up to the Author of all things the great soul that it had received from him. (2)

Britain’s shortest-serving prime minister. Died at Chiswick House in London on August 8, 1827, of inflammation of the kidneys, age 57.

For the last three days, he was somewhat relieved from the excruciating pain he had before suffered. Not that it is true, as was said in the newspapers at the time, that his cries could be heard at some considerable distance from the house. During one day, however, they were heard by the servants below. He was frequently insensible; and during that time, the words, ‘Spain – Portugal,’ were constantly on his lips. (3)

French-born banker and philanthropist who became one of the richest Americans of all time. Died of pneumonia in Philadelphia on December 26, 1831, age 81.

A friend of his who sat in his chamber an hour in the morning of the day of his death represents him to have been altogether unconscious of his condition, and incapable of recognizing those around him. But a short time before he died, he got out of bed and walked across the room to a chair; but almost immediately returned to his bed, placing his hand to his head, and exclaiming, ‘how violent is this disorder! How very extraordinary it is!’ These were the last words he spoke, to be understood – and soon after expired; thus verifying the opinion, which he had always entertained, that nature would remove him from this scene of existence, as she had brought him into it, without his care, consciousness, or co-operation. (4) 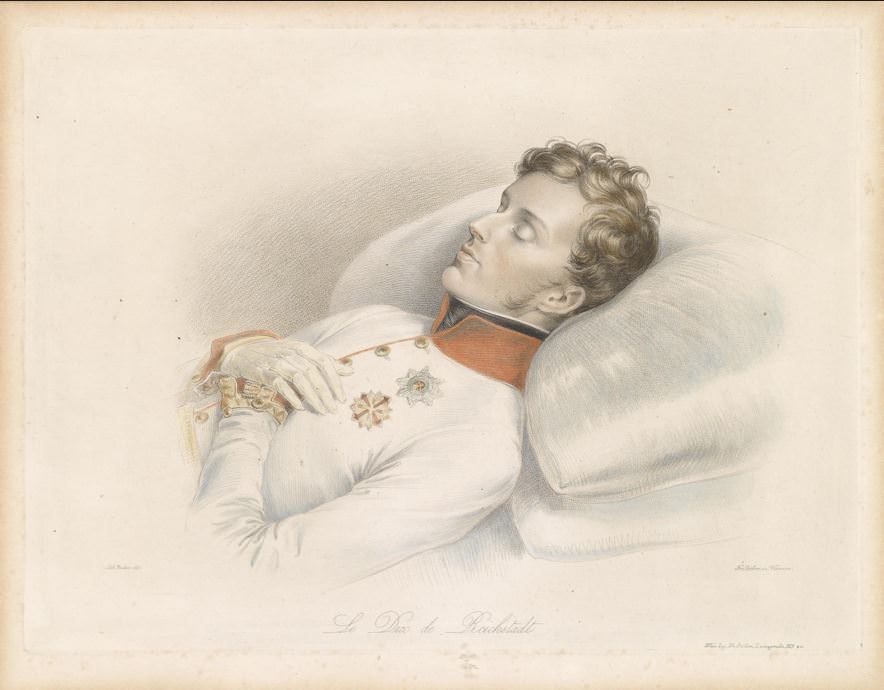 Napoleon’s son, the Duke of Reichstadt, on his deathbed, engraved by Franz Xavier Stöber

Napoleon’s son, the King of Rome, Duke of Reichstadt. Died of tuberculosis at Schönbrunn Palace in Vienna on July 22, 1832, age 21.

Suddenly the Baron [Moll] felt the Duke clutch at his arm convulsively with one hand, while with the other he beat his breast and ejaculated with great effort: ‘Poultices, blisters!’ These were his last words. Hardly had he spoken them before his eyes grew fixed and glazed; the convulsive movements of his body relaxed, and he fell into a state of torpor. (5)

Hero of the American and French revolutions. Died in Paris on May 20, 1834, at the age of 76, after being afflicted with a succession of illnesses (pneumonia, ischury, gout).

Four or five days previously to his death, Lafayette felt oppressed, and became melancholy…. This feeling, however, was of short duration: he soon regained his serenity, and the hope of recovery again lighted up the expression of his countenance. Towards this period of his malady, he observed to me, ‘Quinine and the fever, my dear Doctor, are battling together: give me plenty of quinine, that it may gain the upper hand.’ The next morning he repeated the same idea: ‘I fear,’ added he, ‘that the quinine is in the wrong, and that I shall be obliged to pay the costs of the suit.’ ‘What would you have?’ said he to me a few moments afterwards; ‘life is like the flame of a lamp: when the oil is out the light is extinguished, and all is over.’ On the last day but one before his death, when the visits of strangers were forbidden, Lafayette said to his grandson, M. Jules de Lasteyrie, ‘You will tell the good Princess de Belgiojoso how grateful I feel for her visits, and how much I suffer at being deprived of them.’

…. On the 20th of May…the seriousness of the symptoms increased…. A few moments before he breathed his last, Lafayette opened his eyes, and fixed them with a look of affection on his children, who surrounded his bed, as if to bless them and bid them an eternal adieu. He pressed my hand convulsively, experienced a slight degree of contraction in the forehead and eye-brows, and drew in a deep and lengthened breath, which was immediately followed by a last sigh. (6) 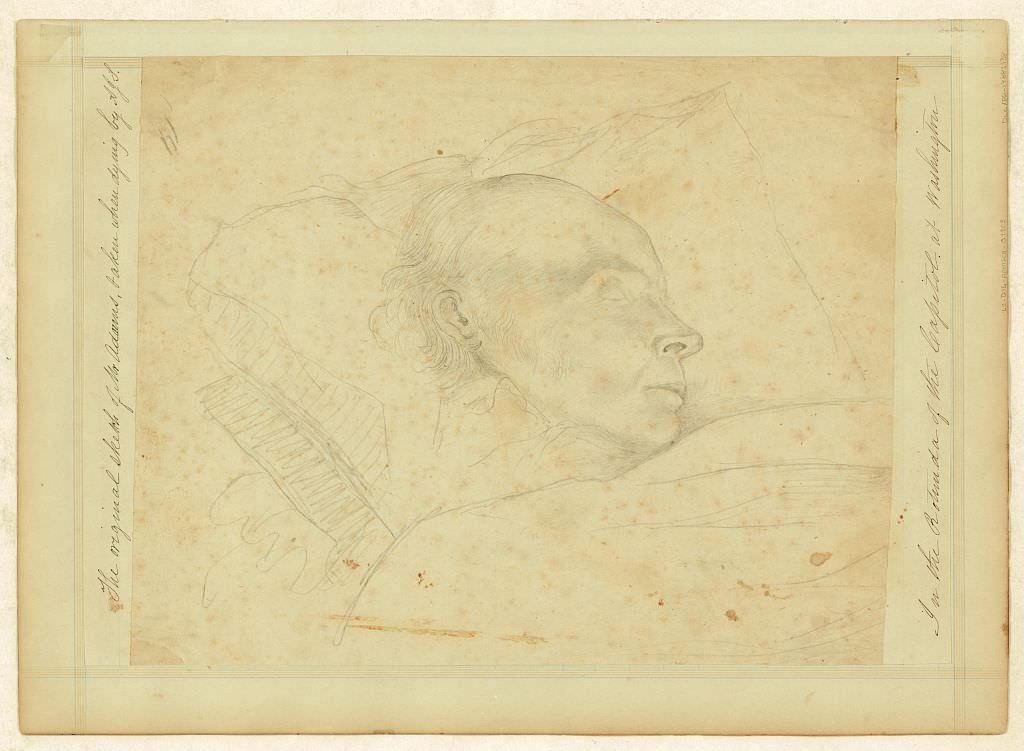 Sketch of John Quincy Adams, taken on his deathbed in the rotunda of the Capitol at Washington by Arthur J. Stansbury, 1848

Sixth president of the United States. Died on February 23, 1848, at the age of 80, in Washington, from a massive stroke.

On Monday, the [21st] of February, at half-past one o’clock, the venerable John Quincy Adams…while in his seat in the House of Representatives, was stricken down by paralysis, and borne to the Speaker’s room in the Capitol. It had been the earnest wish of his heart to die like Chatham in the midst of his labors, and that wish was accomplished literally. ‘This is the last of Earth. I am content!’ was the last memorable sentence that he uttered. The expiring statesman was placed on a cot-bed, with his head toward the west. In this condition, breathing calmly, except at intervals, and manifesting no signs of pain, he lingered, for the most part insensible, for fifty-four hours. (7)

Seventh vice president of the United States. Died of tuberculosis in Washington on March 31, 1850, age 68.

No immediate danger was apprehended until Saturday [March 30]. On that evening he frequently remarked that he was sinking and requested [his son] John to place his watch and papers in his trunk, soon after his pulse was completely gone. He spoke the last words about 6 AM yesterday morning[,] ‘I am very comfortable.’ His eyes continued bright, and his count[en]ance as expressive as ever for an hour afterwards, and he was conscious to the last moment. (8)

Madame Royale, eldest child of King Louis XVI and Marie Antoinette, and the only one of their offspring to survive the French Revolution. Died of pneumonia at Schloss Frohsdorf outside Vienna on October 19, 1851, age 72.

‘Lord, I humbly ask pardon for my fault,’ was her unceasing cry. ‘O God, come in aid to thy humble servant in this the hour of eternal judgement,’ was her fervent prayer. She gradually ceased to be able to recognize those around her; but the voice of the Duke of Bordeaux, as he whispered affectionately in her ear, seemed ever to revive her. Her hand lay in his as she uttered a feeble, ‘farewell,’ after which she never again spoke. (9)

(Yes, that is the same Duke of Bordeaux who received Louis XVIII’s last words. He was Marie-Thérèse’s nephew.) 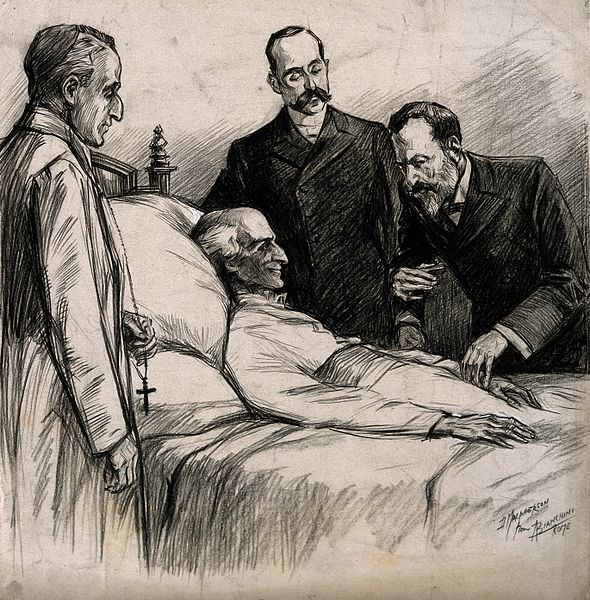 Arthur Wellesley, first Duke of Wellington on his deathbed. Lithograph after a drawing by Sir T. Lawrence, 1852. Source: Wellcome Images

British general and politician. Died on September 14, 1852, at Walmer Castle, age 83, from the complications of a stroke.

After the surgeon left the castle, Kendall [Wellington’s valet]…prepared some tea, and, pouring three or four table spoonfuls into a saucer, asked the Duke if he would take a little. The Duke replied, ‘Yes, if you please.’ These are the last words he ever spoke. He had some difficulty in raising himself to take the tea. Kendall, observing this, placed his hand behind him, and assisted him….

About noon a fresh attack, shown in the exhausted state of the patient by shivering only, came on; and from that time hardly any sign of animation could be detected. (10)

My good friends, put me upon the bed, God will do the rest.