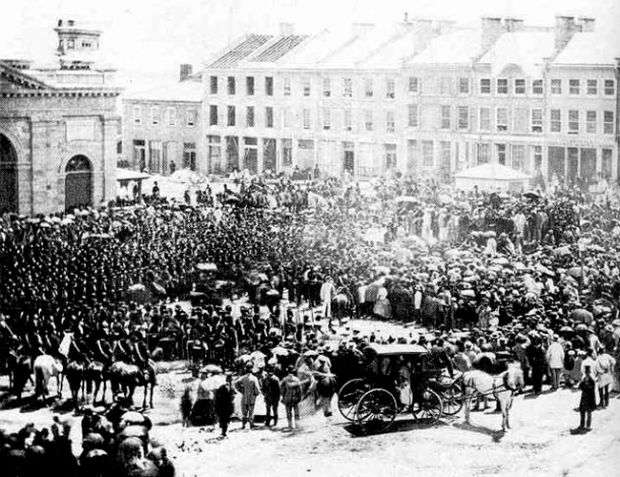 With the first dawn of this gladsome midsummer morn, we hail the birthday of a new nationality. A united British America, with its four millions of people, takes its place this day among the nations of the world. Stamped with a familiar name which in the past has borne a record sufficiently honourable to entitle it to be perpetuated with a more comprehensive import, the DOMINION OF CANADA on this First day of July, in the year of grace, eighteen hundred and sixty-seven, enters a new career of national existence.

Thus began an editorial by journalist and politician George Brown in the Toronto Globe on Monday, July 1, 1867. That was the date on which the British North America Act came into effect. This act of the British Parliament, to which Queen Victoria gave her assent, united the colonies of Canada, Nova Scotia and New Brunswick into the Dominion of Canada. Upon confederation, the new dominion consisted of four provinces: Ontario, Quebec, Nova Scotia and New Brunswick.

‘From Halifax to Sarnia,’ said the New Brunswick Reporter (July 5) from Fredericton, ‘we are one people,– one in laws, one in government, one in interests.’ Summerside, Prince Edward Island, offered its congratulations to the new Dominion thus ‘launched upon the sea of history; and though we do not admire the build of the craft, we cannot find in our hearts to wish her other than a prosperous voyage.’ Even in Charlottetown some bunting appeared, as if to grace an occasion that most Islanders were glad to ignore. And it was an occasion. The Toronto Leader rested from its quarrels with the Globe to say, ‘This is the most important day for the Provinces of British North America on which the sun has yet risen … our public men … [must] rise to the height of our new destiny….’ ‘Our new destiny’ was the theme of many newspapers from Halifax to Sarnia, and even in Newfoundland and British Columbia the ‘memorable day for British North America’ did not pass unnoticed. Reports from the west coast had arrived of the unanimous resolution for Confederation; there was a swelling nationalism in eastern speeches and public demonstrations. The Northwest would soon belong, all of it, to the Dominion of Canada. The bright plumage of parade uniforms; the booming of guns in Halifax, Fredericton, Quebec, Toronto, and Ottawa; the swelling sails of the yachts in Halifax harbour and Toronto Bay; the brilliant summer day itself; who could fail to read the national barometer ‘set fair?’

There were some who failed to do so. In Fredericton on July 3 the Head Quarters said sombrely, ‘The future may be full of hope … but it is useless to shut one’s eyes to the fact that in New Brunswick there is discontent and indignation smouldering in many places, while in Nova Scotia these feelings are afire and in action.’ There was black crêpe in Yarmouth and Halifax; on July 1 the Acadian Recorder came out in black, and the Halifax Morning Chronicle published a bitter epitaph. ‘Here, alas!’ said the Examiner in Charlottetown that same day, ‘the great public of Prince Edward Island treat the thing with feelings akin to contempt.’ The very next day, July 2, plain George Cartier was sitting down to write his angry letter to Lord Monck on the K. missing from the C.B. The history of British North America between 1864 and 1867 can be written as a paean of triumphant nationality; it can also be written as a bitter comment on the machinations of Canadians and the ruthlessness of Downing Street. More than one bitter essay came from Nova Scotia and New Brunswick criticizing the selfishness of the Canadians. As the London Times had remarked, however, ‘Half the useful things that are done in the world are done from selfish motives under the cover of larger designs.’ Whether ‘useful’ could be applied to Confederation was a matter of debate; the British certainly thought so. (1)

A long and difficult maturity

Manitoba and the North-West Territory joined the Dominion of Canada in 1870; British Columbia in 1871; and Prince Edward Island in 1873. The Yukon Territory was created in 1898; Alberta and Saskatchewan in 1905. Newfoundland joined Canada in 1949. In 1999, part of the Northwest Territories became the territory of Nunavut. 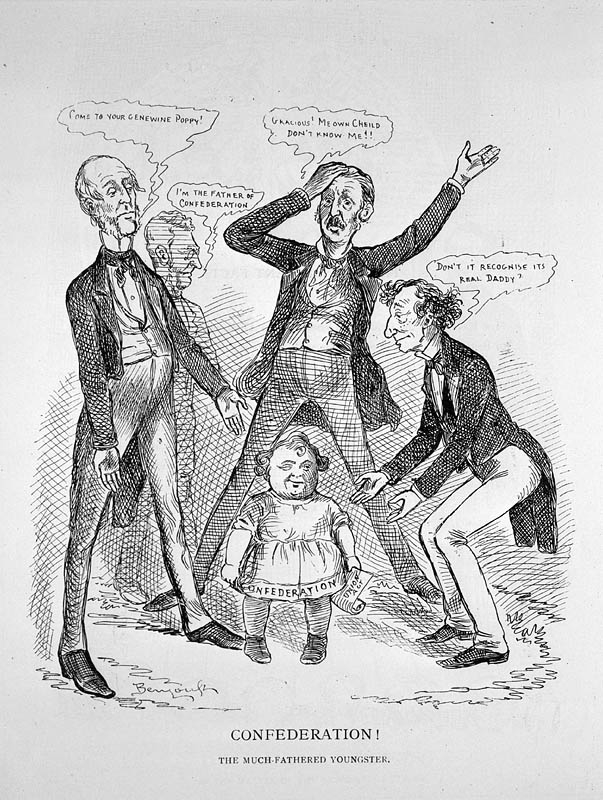 July 1, 1867 was the beginning of a long and difficult maturity. The diversity of the colonies, from Newfoundland to British Columbia was as remarkable as the distance between them. The reality of 1867 was frightening. It showed how naïve the dreams of the colonists were: Newfoundland, its population clinging precariously to a living wrested from the Labrador current and a hard land; Prince Edward Island, complacent, defiant, parochial; Nova Scotia, afloat on seven oceans, proud of herself and jealous of Canada; New Brunswick, half-American in politics and attitude; Quebec, determined to get every jot and tittle of privilege with or without Ottawa; Ontario, sleek, bigoted, and stentorian; a thousand miles from Toronto, at Red River, 9,000 mixed settlers and the Hudson’s Bay Company trying to keep the northwest from the Americans; in distant British Columbia, a dying gold rush with two small and hostile towns holding the mortgage. This was the reverse of the glory arguments that resounded in the speeches of 1864. One was the stubborn and almost intractable reality: the other was a political dream of wonderful audacity….

[N]o one knew, not Cartier, not even Macdonald, what really was involved in the creation, administration, and maintenance of a transcontinental state. An empire of this size had been created before; it could be done – that was the great example the Americans provided. But it had been done by a rich and powerful nation of twenty millions. The contemplation of the same thing by a struggling group of still discordant provinces, with a population of four millions was surprising; perhaps it was absurd. The railway that might have given such a union a semblance of reality did not yet exist. Union of the colonies was achieved in 1867; but it was hardly more than a beginning. The railways at Rivière du Loup and Truro that stared into the empty miles between marked a cause not yet won, a nationality not yet realized. These still lay in the difficult years ahead. (2)

With the first dawn of this gladsome midsummer morn, we hail the birthday of a new nationality. A united British America, with its four millions of people, takes its place this day among the nations of the world.