A Summer Night in New York City in the 1800s

Do you find it hard to get a good night’s sleep in the summer? Pity the residents of New York City in the summer of 1822. 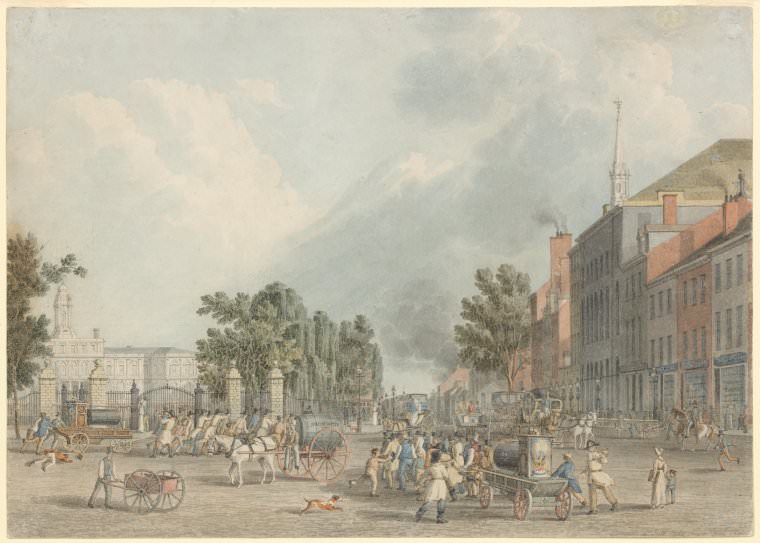 In London it is well known that a considerable portion of the inhabitants, particularly the most depraved, sleep all day, and walk all night; hence, at no period of the twenty-four hours are the streets deserted. We, in New York, are quite a sober set, particularly in the winter. The streets, of a frosty night, are actually desolate; and even the watchmen, those vigilant sentinels of the dark, house themselves comfortably, and take their nap beneath some porch or penthouse, well sheltered from the storm.

In the summer, however, things wear a different appearance, and there are many who sleep through the heat of the day, and walk through the cool of the night. The weary traveller or the industrious citizen steals but a hasty dose in these noisy times, and enjoys his balmy sleep by snatches.

About 2 o’clock on Saturday morning, the neighbors in the vicinity of Washington Hall [located at the corner of Broadway and Reade Streets] were aroused from their slumbers by a clamour in the street of no inconsiderable violence. A lady had detected the infidelity of her husband, which, like a kind considerate wife, she was endeavoring to conceal by having him taken to the watch house.

The noise made by these connubial rioters awoke all the bachelors in the neighborhood, who, shaking the poppies from their brows, popped their white night night-caps and heads from their windows to take a lesson in the line of conjugal affection.

‘O you thief – you varlet – you infidel,’ said the lady, with the utmost mildness and having a smack of the brogue, ‘have I cotch’d ye? How dare ye go after another man’s wife, you villain?’

‘Now, my dear,’ said the husband, ‘consider where we are.’

‘Don’t talk to me; ye wretch, you consider everything but your poor wife; but I suspected ye, faith – and sure, I dogg’d ye, and I cotch’d ye, you villain as you are, with another woman.’

‘Now you are wrong, my love,’ said the poor devil – ‘you are wrong; I was sitting up with a dead man.’

Our watchmen are, in general, very civil creatures, having, at best, little energy, but a great deal of curiosity. They are so fond of hearing particulars, and trying a case in the streets.

In this instance, after hearing patiently the volubility of the lady, and her vehement, if not affectionate solicitations to carry her husband to the watch-house, the trusty guardians of the public peace, not feeling at liberty to discharge the man, nor fully competent to decide whether the public peace had been disturbed, concluded that it was best to carry them both off.

Order being restored, and folks returned to their comfortable mattresses, a dull half hour crawled on, interrupted only by some early carriage coming in or going out of town, or the clatter of feet tripping it over the pavement. Presently an amateur of music, thinly clad, came sauntering along, and fixing himself under the window of a house occupied by a very handsome lady, took the disjointed pieces of a clarinet from his pocket, which he screwed together, and, as Hamlet says, he ‘gave it breath with his mouth,’ and it discoursed not the most eloquent music; on the contrary, it produced screams as harsh, discordant, and violent as a peacock, or the nightly braying of a Spanish jack-ass. If this was not disturbing the peace, and offending good taste, and, as such, deserving municipal correction, I know not what is an offence at common law. Those who are accustomed to have their slumbers gently disturbed by music stealing over the senses, wafted with skill and harmony over the nightly breeze, can well imagine the effect produced by a squeaking squalling instrument ‘piercing the night’s dull ear.’

Occasionally, we have some mad poet swinging himself along by the light of the moon, and bellowing forth passages from Shakespeare or Byron. Sometimes a song or ballad is minced forth in a dolorous style; and, as morn blushes from the east, the heavy butcher’s cart, the light wagon of the milkman, the musical tones of the sweep, and the hum of business, which at early day commences, finished the languid drowsy night, and leaves us unrefreshed, uninvigorated. Such are the charms of a city life: such is a night, a summer night in New York. (1)

It’s just as well that Napoleon – who visits New York City in the summer in Napoleon in America – was not a great sleeper.

Advice on Settling in New York in 1820

Taking the Waters at Saratoga Springs and Ballston Spa

How to Spend Summer in London in the early 19th Century

Drinking Cold Water and Other 19th Century Causes of Death

The neighbors in the vicinity of Washington Hall were aroused from their slumbers by a clamour in the street of no inconsiderable violence. A lady had detected the infidelity of her husband, which, like a kind considerate wife, she was endeavoring to conceal by having him taken to the watch house.