How to Spend Summer in London in the Early 19th Century

In the early 19th century, fashionable and would-be fashionable residents of London considered it desirable to leave the city for at least part of the summer, “when there is nobody of any consequence in town, excepting a few mad dogs.” (1) If one couldn’t get out of London, it was important to pretend to.

An unfortunate Marchioness and two Countesses were yesterday ascertained to be in town by ‘White’s men.’ Expulsion from Almack’s next season will most certainly be the consequence. An unhappy and inexperienced housemaid was dismissed on Saturday by Dowager Lady —, for having incautiously thrown open the drawing-room window shutters, and thus indicated residence and occupancy by the noble owner. A clownish footman was in the same way last week deservedly cashiered by his Lord, for having with a broom removed the symptoms of vegetation in front of his Lordship’s house in Grosvenor Square, and so destroyed the unerring proof of being long ‘out of town.’ The Marquis of — is said to have been detected entering by Hyde Park corner last night: we trust the rumour is unfounded. (2) 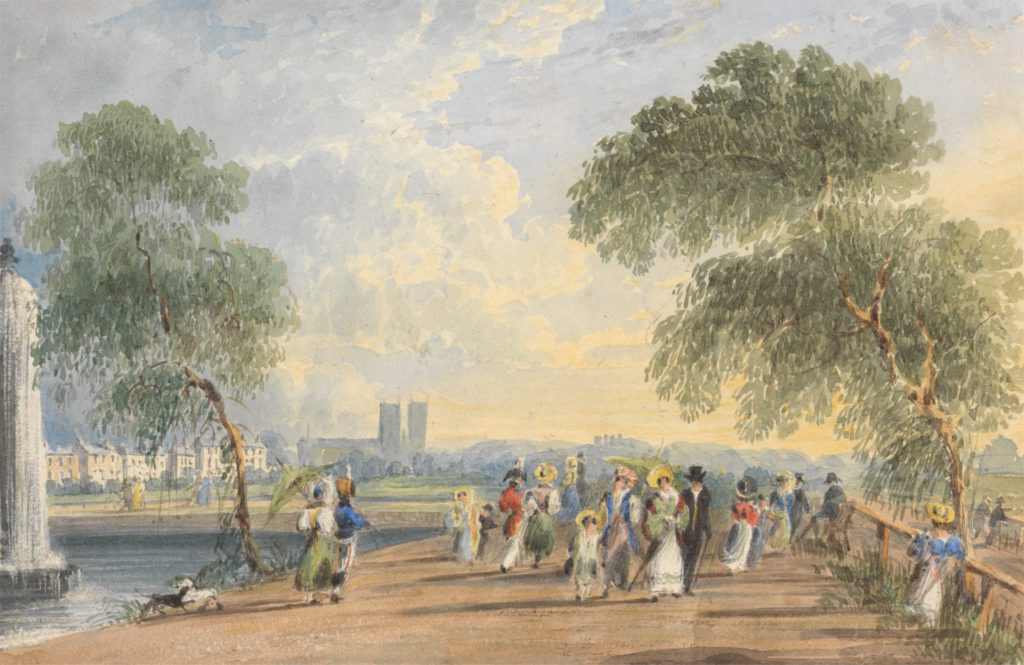 The motivation to escape London in the summer was due in no small part to the “parching, roasting, grilling” weather.

[H]ackney-coachmen broil their beef-steaks upon the trottoir, journeymen-taylors sup on lobster-salads, and the Duke of Wellington’s porter, looking like Jack Manners in a livery, stands at his Grace’s gate with his hands in his laced waistcoat pockets, the self-appointed receiver-general of the western dust. (3)

In June of 1820, Napoleon in America character Dorothea Lieven complained to Clemens von Metternich (who is also in the novel) that she was “melting in the heat.”

Without any warning, we have been transported to the tropics. Only in Kensington Gardens can one breathe. But for some years that lovely garden has been annexed as a middle-class rendezvous, and good society no longer goes there, except to drown itself. Last year they took from its lake the body of a very beautiful woman, expensively dressed, who had probably been a whole week in the water. (4)

It was less torrid outside London, though that did not prove attractive to American writer James Kirke Paulding.

To me [who loves] the sunshine like a terrapin, there is something chilly and ungenial in the English summer, and it offends me hugely to hear a fat, puffing, beer-drinking fellow, bawling out to his neighbour, ‘A fine day,’ when the sun looks as if it might verify the theory of one of the old Greeks, that it was nothing more than a great round ball of copper. Whether this melancholy character in the climate, or the practice of drinking beer in such enormous quantities, or both combined, have given that peculiar cast of bluff and gruff stupidity observable in the common people of England, I cannot say; but certainly, if ‘a man who drinks beer thinks beer,’ the question is decided at once. (5)

The heat in the city was accompanied by sounds, described by English writer Charles Molloy Westmacott in “Miseries of a London Summer Morning.”

Who has not wak’d to list the busy sounds
Of Summer’s Morning in the sultry smoke
Of noisy London? On the pavement
The sooty chimney-boy, with dingy face,
And tatter’d cov’ring, shrilly bawls his trade,
Rousing the sleepy housemaid. At the door
The milk-pail rattles, and the tinkling bell
Proclaims the dustman’s office, while the street
Is lost in clouds impervious. Now begins
The din of hackney-coaches, waggons, carts;
While tinmen’s shops, and noisy trunk-makers,
Knife-grinders, coopers, squeaking cork-cutters,
Fruit-barrows, and the hunger-giving cries
Of vegetable venders, fill the air…. (6)

Go to the opera

For those who were stuck in London during the summer, there were entertainments, including the panorama, Vauxhall Gardens and the opera.

This theatre [the English Opera House] commenced its summer campaign last night, under very favourable auspices. The play bills announced the first appearance of a young lady on the London boards; and the re-appearance of Mr. Philips, after an absence of eleven years, spent chiefly among the Americans. The piece selected was the comic opera of the Barber of Seville, which, as a vehicle of music is well enough, even were some excellent touches of low humour not scintillated over it; but unfortunately it came forth with considerable ‘alterations and additions,’ two phrases which, with operas, sound rather ungratefully in our ears. Some of Rossini’s music was introduced; and whether it was done out of compliment to the star of the Italian Opera, or to the young lady, we cannot say; but it had the effect of extending the piece to a most undue length….

A new comic pantomime entitled the Monkey Island, or Harlequin and the Loadstone Rock, followed the opera. It is really one of the worst of the kind which it has ever been our lot to witness. The first scene introduces us to a barrel cast ashore by the wild waters, which some wicked fairy has put in a roar. From this casket out steps a mariner; but the luckless wight is encountered by two snakes; one of which he slays, and out of the other a beautiful fairy is produced, who transports the destroyer to the Monkey Island, where Columbine has been planted. We are then introduced into a huge posse of monkeys and orangutans, with huge black tails and most frightful visages. (7) Highest Life in London. Tom and Jerry ‘Sporting a Toe’ among the Corinthians at Almack’s in the West, by Isaac Robert Cruikshank and George Cruikshank, 1821. Image source: National Gallery of Victoria, Melbourne, Purchased 1956. This digital record has been made available on NGV Collection Online through the generous support of the Joe White Bequest.

The Assembly was on Wednesday night one of peculiar brilliancy, although not crowded. The most pleasing novelty, and what gave additional effect to the distinguished throng, presented itself in the presence of the Ladies who composed on the night of the Caledonian Ball [held at Almack’s the preceding Friday] the Quadrilles of the White and Red Rose, in the same beautiful dresses worn by them on that occasion; they thus formed what are termed, Quadrilles Costumées. Dancing commenced with a Polonaise, and in this graceful and beautiful figure, all the rank, youth, and beauty of the room joined. (8)

Dine at a tavern

In the evening of a very hot summer day, a foppish young gentleman was lolling in one of the boxes of a London tavern, waiting in a kind of a languid listlessness, for his dinner to be served up. At last the waiter made his appearance, and having placed a chicken and wine, &c., on the table, was about to withdraw. ‘Waiter,’ said the young gentleman with a feeble voice, ‘cut up that chicken – it’s a labour I can’t endure. The fatigue even of eating is a bore scarcely to be suffered.’ The waiter obeyed, presently he was ordered to fill a glass of wine, and hand it to the lips of the fop, who received it in an elegant reclining composture. This scene diverted an Irish gentleman, who sat in the opposite box, feasting on roast beef. ‘Hallo,’ said he, ‘you waiter come here.’ The waiter came bowing. ‘Cut up that roast beef,’ (said the gentleman). ‘Tis a great bore to be hewing at roast beef in hot weather.’ The waiter obeyed. ‘Now stick it on a fork, and reach it to my mouth.’ Twas done. ‘Now my dear honey wag my jaw, tis a horrid bore to wag one’s own jaw on a summer day. (9)

Take eleven drachms of muriate of ammonia, ten of nitrate of potash, and sixteen of sulphate of soda. They should be recently crystallized, and contain as much as possible of the water of crystallization without being damp. Reduce each of these salts separately to a fine powder, and then mix them gradually in a vessel made of fine tin plate with five ounces of water; as the salts dissolve, a degree of cold will be produced sufficient to bring the thermometer below the freezing point. If a little water in a test tube be immersed in this mixture as the solution is going on, in about ten minutes it will be frozen. The vessel in which the mixture is made should be just large enough to contain it. Any thing, such as wine-bottles, jars containing conserves and fruits, lemonade for sick people, &c. immersed in this mixture, or moistened with it, and exposed to the action of a brisk current of air, may be rendered cold in the hottest day. (10)

Watch out for thieves

A fellow walking down Snow Hill, London, on a sultry summer evening, observed an old gentleman without his hat panting and leaning on a post, and courteously asked him what was the matter. Sir, (said the old man,) an impudent rascal has just snatched my hat off, and run away with it. I have run after him until I have quite lost my breath, and cannot, if my life depended on it, go a step further. ‘What, not a step,’ says the fellow. ‘Not a single step,’ returned the other. ‘Why then, by Jupiter, I must have your wig;’ and snatching off his fine flowing caxon, he was out of sight in a minute. (11)

A Summer Night in New York City in the 1800s

Dorothea Lieven: A Diplomat in Skirts

Exercise for Women in the Early 19th Century

Hackney-coachmen broil their beef-steaks upon the trottoir, journeymen-taylors sup on lobster-salads, and the Duke of Wellington’s porter, looking like Jack Manners in a livery, stands at his Grace’s gate with his hands in his laced waistcoat pockets, the self-appointed receiver-general of the western dust.