The Bedroom Adventures of a Napoleonic Soldier

The adventures of a Napoleonic soldier in the bedroom can be as entertaining as his exploits on the battlefield. At least that’s the case when Jean-Roch Coignet, a grenadier in Napoleon’s Imperial Guard, tells the tale. In late 1809, at the age of 33, Coignet was back in Paris after the Austrian campaign, during which he had been promoted to sergeant. Wanting to improve his appearance to suit his new rank, he bought some false calves – padded attachments for the lower limbs – to make his legs look more shapely. Shortly thereafter, Coignet was invited to dinner at his captain’s house, along with some “distinguished military men and citizens and ladies of high degree.” The next morning, one of the ladies sent him a letter asking him to call on her at eleven o’clock. This “warmed [his] imagination.” What follows is Coignet’s account of how the affair played out. 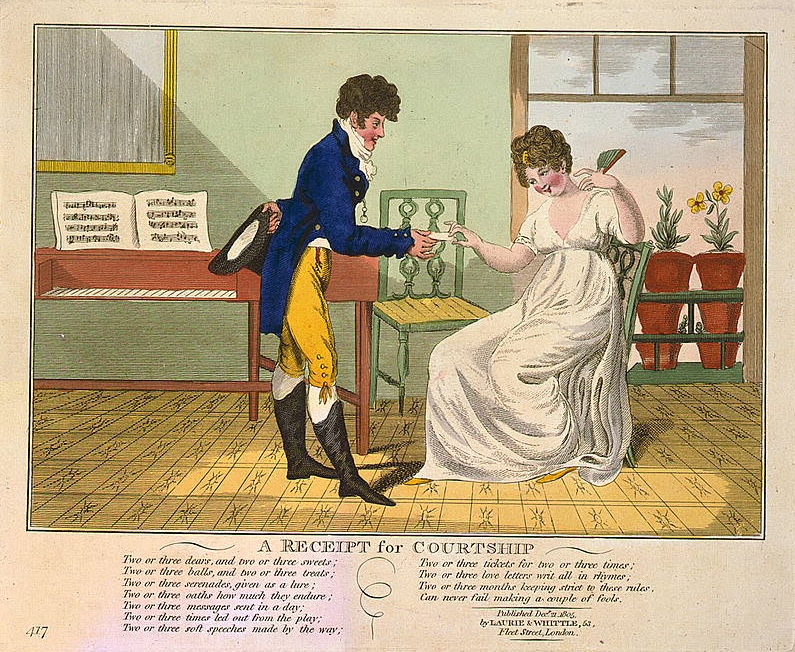 I found a comrade to mount guard for me, dressed myself up to the nines, and took a cabriolet to the address indicated. I am not ashamed to confess that I felt the thrill of love (my age is excuse enough). On arrival I gave my name, and the chambermaid showed me into a fine drawing-room, where I found one of the two ladies between whom I had sat at dinner at my captain’s, dressed in a captivating negligée. I could hardly contain myself.

“You may go,” said she to the chambermaid.

Finding myself alone with the lovely lady, I was confused and had not a word to say; she took my arm and led me into her bedroom, where I saw a table spread with tempting dishes, wine and sugar, and all kinds of restoratives; this was her way of opening the ball. The conversation turned on her intentions with regard to me; she explained that she had looked upon me favourably, but could not openly receive me in her own house.

“If you are my man, I will give you an address where we can meet three times a week. I go to the Opera, and you will find a room ready prepared close by. When my carriage sets me down there, I will come to you, and we will pass the evening together.”

“At all costs, find a substitute to mount guard for you; I will pay.”

She plied me with wine and sugar; I saw by her excited condition that it was for me to repay her with my person, and, seizing one of her hands, I said: “I am at your service.”

She led me to her easy-chair, and I had to prove my mettle there and then; she showed me her fine bed, which had mirrors above and all round it; never had I seen such a room. She seemed pleased with me; I spent a day of bliss with that fair lady, and only left her to answer roll-call. I was a little unsteady on my legs as a result of the stormy day I had passed, but was delighted with my conquest, and did not fail to keep my appointment on the day arranged. I found a cold dinner laid for me, and was waited on by the pretty chambermaid, who was there for the purpose of helping her mistress to dress and undress. I sat down and dined like a spoilt child.

“And you, Mademoiselle, are you not dining?”

“Yes, Monsieur, after you, if you please. Madame is delighted with you; she is coming early to take coffee, and will spend the evening with you. Dine well and drink plenty of wine; it is claret, and here is some sugar, which will improve it.”

“I should explain that I am going to undress Madame. She will be easier in her dishabille; and I shall come back to dress her before she goes home.”

Madame arrived at eight, and after the usual civilities had been exchanged, sent for coffee. We were left alone, and I drew near to her.

“Wait,” she said, “we are going to have the whole evening together.”

“Stay where you are!”

Coffee was served immediately; that finished, she said: “Go into the next room, I will send for you.”

I went out, and sat down to await my fate; soon I was sent for, and told that Madame was waiting for me. What was my surprise to find her in bed!

“Come and sit close by me in this armchair. Have you got twenty-four hours’ leave?”

She gave the chambermaid her orders, and dismissed her till next morning, when she was to bring our coffee and make her mistress’s toilette. As for me, I felt mighty awkward about undressing, and especially about how I was to hide my wretched false calves and my three pairs of stockings. What a fix I was in! If only I could put out the candle, all would be well. However, somehow I managed to hide them under the pillow; but it damped my spirits considerably. And the problem of how to get them on next morning tortured me.

Fortunately my beauty got up first to make things easy for me, and went into the next room with her maid to dress. I lost no time, and at once set about pulling my three pairs of stockings on under the bedclothes; the difficulty was to avoid twisting them awry, and I only succeeded with one leg, but Madame never noticed.

It would have taken a barber to dress my hair properly; and in a very short time I was asked if I was up. “Tell Madame I can present myself now, and am at her service.”

Madame looked fresh and beautiful, and we drank our chocolate together. As soon as matters had been adjusted between us, she left with her maid, and I returned to barracks in no little disorder.

“One of your stockings is twisted, it looks like a false calf,” said one of my comrades.

“So it does,” I answered in confusion, “I must go and put it straight.”

When I reached my quarters, I undressed and took off the infernal calves that had so tortured me for twenty-four hours; nor have I ever worn false calves since.

I continued to see my beauteous and witty dame according to the programme, but the task was too much for my strength; I had found my master, and should have been forced to surrender. But she gave me the chance of beating a retreat; I received a letter from her, asking me to let her see a specimen of my style. I was to send my answer to the address indicated. I found myself in an awkward position, being a very poor hand at writing; but however, I faced the situation and did the best I could. My phrases did not answer her expectations, and she reproached me very justly with my lack of education.

“Your letter disappointed me,” she said; “the spelling is wretched, and you have no style.”

I immediately answered: “Madame, I deserve all your reproaches, and I can’t complain. If you want a perfect letter, I will write out twenty-five letters of the alphabet and all the full stops and commas that are needed for a letter worthy of you; put them where they ought to be, and so help my feeble powers.”

I refused ever to see her again; and all her powers of persuasion were exerted in vain. (1)

For more about false calves, see “Victorian Fad of False or Artificial Calves” by Geri Walton, and “Bums, Tums and Downy Calves” by Sarah Murden.

2 commments on “The Bedroom Adventures of a Napoleonic Soldier”

I went out, and sat down to await my fate; soon I was sent for, and told that Madame was waiting for me. What was my surprise to find her in bed!