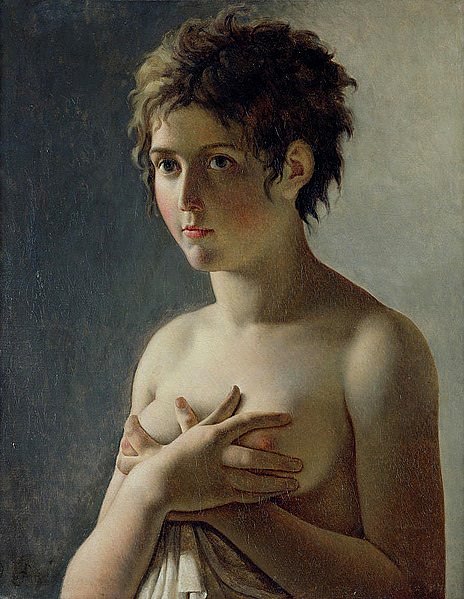 Jeune fille en buste by Pierre-Narcisse Guérin, 1794, one of the earliest works showing a woman with coiffure à la Titus

In an earlier post I looked at Napoleon in America character Barthélemy Bacheville, who was described in an 1816 police report as being “coiffed à la Titus.” This got me wondering: what does a Roman emperor have to do with hairstyles in early 19th-century France?

The Titus in question turns out not to be Emperor Titus, who ruled the Roman Empire from 79 to 81 A.D., but rather Titus Junius Brutus, elder son of Lucius Junius Brutus, who supposedly founded the Roman Republic around 509 B.C. The latter Titus is a character in the play Brutus by the French Enlightenment writer Voltaire. The play is about Titus’s participation in the Tarquinian conspiracy, for which Lucius Junius Brutus (the “Brutus” in the title) condemns his son to death.

Brutus first appeared on the French stage in 1730. It was revived during the French Revolution, when there was an enthusiasm for interpreting classic plays in light of current circumstances. During the opening performance at the Comédie-Française in Paris on November 17, 1790, there was pandemonium in the theatre when the actor playing Brutus cried, “Gods! Give us death rather than slavery!” (1) Talma playing the role of Titus in Voltaire’s Brutus

On May 30, 1791, the 13th anniversary of Voltaire’s death, Brutus was performed at the royalist Théâtre de la Nation and at the rival Théâtre de la République, established by the actor François-Joseph Talma. (Talma would later become Napoleon’s favourite actor and one of Pauline Bonaparte’s lovers.) Jacques-Marie Boutet de Monvel played Brutus. Talma played Titus. Both were costumed in the garb of ancient Rome. Talma’s hair was cut short, in the style of a Roman bust.

When he appeared, the public…welcomed him with several bursts of applause. Eight days later, all the young people of Paris had their hair cut short, and from that evening dates the fashion of styling one’s hair à la Titus. (2)

Good for the guillotine Another explanation traces the coiffure à la Titus to the bals des victimes (victims’ balls), which reputedly took place after the Terror (1793-94). According to this, the hairstyle was intended to express solidarity with those who had been guillotined (the hair of the condemned was chopped off to make sure the blade went cleanly through the neck).

One of the most fashionable and brilliant kinds of assembly was called Le Bal des Victimes, the condition of entrance to which was the loss of a near relative by the guillotine. Between the country-dances [the dancers] said, ‘We dance on the tombs,’ and a favourite dress for the hair was adopted from the way in which [that of the guillotine victims] had been arranged immediately before execution. (3)

There is, however, little if any contemporary evidence that the bals des victimes in fact took place. The story did not became popular until the 1820s. Historian Ronald Schechter terms the balls a “marginal rumor hardly mentioned by contemporaries [that entered] the historiographical canon as an unquestioned fact. … Victims’ ball tales grew primarily out of the literary soil of ‘guillotine romanticism’ and the fantastic in the second quarter of the nineteenth century.” (4) The coiffure à la Titus was a short and choppy cut. Bangs were left long over the forehead, and the hair was cropped to the top of the neck in the back. Initially popular with Republican men, by the mid-1790s the hairstyle was also sported by women. To imagine what a change in style this marked, think of the big hair, long wigs and elaborate coiffures of the ancien régime.

Critics complained that the look was unfeminine and harmful to health.

Examine the inconveniences of the coiffure à la Titus and you will see that short, unpowdered hair exposes the scalp to all the vicissitudes of the atmosphere; that the necessity of washing the head to maintain cleanliness, be it with cold water, be it with hot water, which produces cold when it evaporates, must multiply the effects…and give rise to irregular perspiration…. (5)

This, it was believed, could cause inflammation, migraines, conjunctivitis, dental cavities, earaches, sore throats, etc.

Beginning around 1800, the coiffure à la Titus began to assume a more refined appearance. Perfumed pomades were used to define curls and create a tousled effect. Flowers and ribbons were sometimes added. Popular during the French Revolution, Titus hair remained in style through the years of the Directory, the Consulate and Napoleon’s Empire. In 1802, a London paper noted that “nearly two-thirds of the women of fashion” in Paris “wear their own hair or wigs à la Titus.” (6)

How many people have not had the advantage of having, so to speak, the face framed by the arrangement of hair! How many have a wide forehead and the temples too exposed! The [coiffure à la] Titus agreeably covers these faults. How many more do not have the fine and regular features, or certain facial expressions, that the Titus gives to those who are without! How many people, finally, have the misfortune to be born with defective traits or are ravaged by smallpox, and become quite tolerable with Titus? For many, it stops Time…. Portrait of a man with coiffure à la Titus, by Louis Léopold Boilly

Titus has all these advantages; the proof is in the style’s longevity; ladies are rarely wrong about what is advantageous to them; as for me, I dare prophesy that it will never disappear entirely. However, it must be admitted that the Titus is not a noble hairstyle, neither imposing nor showy, but it is the most likable: it is an everyday style, because ladies would rather please than be admired. To please is the perpetual desire of persons of that sex, and the coiffure à la Titus is useful, if not essential, to the majority.

The exception is only for young people to whom it gives the air of a woman before their time. Any kind of crimp on the forehead and the temples produces the same effect. This exception also extends to very fresh faces that have fine, delicate traits and are full of expression. …

A perfect face has no need of Titus; it would be profane to cover a handsome forehead, pretty temples and perfect eyebrows: the ancients taught us to respect these kinds of beauty. But where did they find them? One can cite such and such painter or sculptor who employed twenty models to make one. Thus I return to my text: Titus is the coiffure par excellence. This statement is so true that all the hairstyles that have been most successful in all the ages are those that have something in common with the Titus. As long as there have been scissors, have we kept long hair around the face? … Indeed, what could be less agreeable and more embarrassing than long flowing hair? … It hinders movement and thereby removes grace. … Finally, when the hair is long, one braids it, one rolls it, thereby reducing the head almost as if it were à la Titus. … Why does one need the difficulty of maintaining long and annoying hair, when one can procure it when one desires? Wigs are resources for showy days. …

I do not mean to say… that women should have their hair cut like men, but a styled Titus, forming waves that the air can stir and flowing curls to which the least movement gives play: that is what gives expression to the physiognomy and seems to animate the coldest face; a disordered arrangement in which art is hidden; it covers a defect and allows what is advantageous to be seen; it is thus that one can say that a woman à la Titus is a rose in bloom. (7)

With the restoration of the Bourbons to the French throne in 1815, there was a return to more elaborate hairstyles, suggestive of pre-Revolutionary times. Police were known to profile men still wearing their hair à la Titus, thus the comment in the report on Bacheville.

How Pauline Bonaparte lived for pleasure

Titus is the coiffure par excellence. This statement is so true that all the hairstyles that have been most successful in all the ages are those that have something in common with the Titus. As long as there have been scissors, have we kept long hair around the face?