In describing Jean-Pierre Piat’s excursion through the streets of Paris in Napoleon in America, I tried to give an impression of what it was like to walk through the French capital in the early 1820s, during the reign of Louis XVIII. For a description of a stroll through Paris a decade later, it’s hard to beat the following extract from a 19th-century travel book. The anonymous British author provides a lively sense of a Sunday in Paris in the 1830s, during the reign of King Louis Philippe. 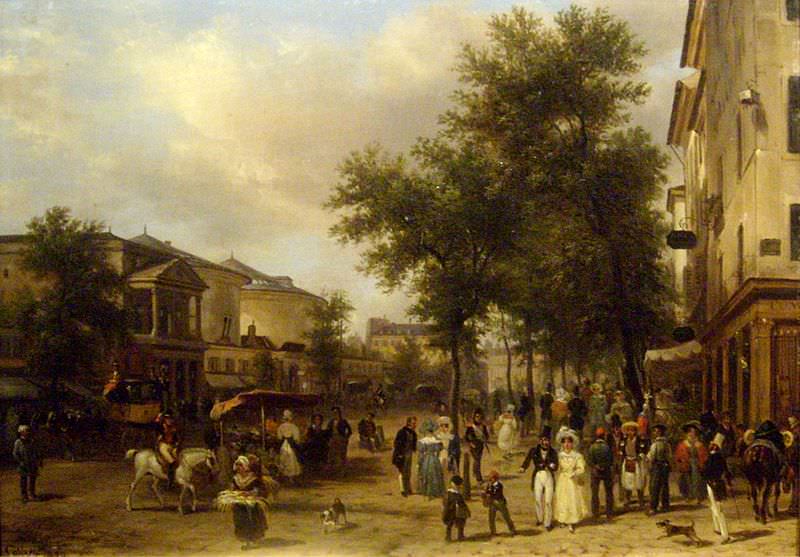 “In Christendom, the manner in which the population, especially of a large city, spend the Sunday forms, perhaps, the best illustration of their education, habits, prejudices, slavery of opinion, subservience to priestcraft, and the influence of legislation.

“Sunday in London is unlike the same day in any town in Europe. The whole metropolis looks as if the plague had visited its population – melancholy seems to pervade all from east to west. It has an atmosphere of sadness, which seems despair to all who have been brought up or lived long on the Continent, and who are ignorant of our real virtues, as well as of the abominations and vice, which closed doors and window-shutters conceal.

“Paris, again, is more joyous on Sunday than on any other day in the week. Not that the people rest altogether from their usual productive labours, but that by devoting its early hours to industry and profit, and its afternoon and evening to gaiety, its animation is never suspended.

“On visiting that city soon after the last revolution, having been for several years accustomed to the solemn Sabbaths of England and North America, the first Sunday I spent in the capital of France was to me uncommonly striking. I was almost prepared, in the orthodox charity of a true Calvinist, to denounce the nation as having, in the course of eternal justice, drawn down upon it the retributive judgement of all just heaven. I was accompanied by an excellent, amiable and intelligent Canadian gentleman – of the old French school in his manners – a good Catholic, and liberal in politics and religion. Yet even he, from the force of habit, was shocked at seeing the Parisians at work, instead of being at mass.

“On our walking out early in the morning, we had not a little difficulty in crossing the streets, in consequence of the vast number of hackney coaches, and cabriolets, and nondescript vehicles, filled with parties going to enjoy the day in the country; and of numerous loaded wagons, some with hay, some with wine casks, others with medley loads. The shops, cafés, restaurants, were all open. We wended our way along the Rue Faubourg St. Honoré and turned into the church of the Assumption. Mass was performing; but the congregation consisted of only nine old women, three old men, seven little girls, and four boys, with three deformed beggars at the doors. When we left the church, rue St. Honoré was thronged.

“We met several detachments of national guards, horse and foot; also troops of the line, sappers and miners, horse artillery, and several baggage wagons. No church bells ringing, but the drums were beating in all quarters. As we turned down rue Castiglione, masons were at work on all the new buildings. We passed on to the Tuileries, where alterations were making in the palace and garden by the citizen king, and there also many were at work. At the same time a great movement of the populace across the Pont-Royal followed the crowd to the Champ de Mars.

“A grand review – 30,000 line, guards and artillery. The artillery exercise was considered sublime, and the fusillage brilliant. The king and staff, Duke of Orleans, Soult, &c. were present, and a vast multitude assembled. We crossed over the Pont de l’Ecole militaire. Hundreds of washerwomen and washermen were beating dirty linen to pieces in the huge floating sheds moored on the river – several people dragging nets for fish. We proceeded to the Champs-Elysées – people amusing themselves and their children in seeing the exhibitions of mountebanks, grimaciers, and polichenello, and on the swinging machines and wooden horses suspended – good exercise. Walked on to the Tuileries gardens – Parisians, in great numbers, sitting on chairs, under the shade of majestic trees; some conversing, some promenading, some playing with their children, and many reading newspapers, or sipping lemonade or coffee.

The Louvre and Notre Dame

“Spent two hours in the museum of the Louvre, where the bourgeois of Paris lounge each Sunday, admiring antique statues, and the old and new schools of painting, which my Canadian friend observed ‘is a better resort on the Sabbath than the London blue-ruin chapels.’ We crossed over the Seine to the quai Voltaire – walked to the Pont neuf – books exposed in great numbers for sale along the quays – shops all open – caricatures of Louis Philippe, grotesque, ridiculous, and political – portraits of Napoleon, the Duke of Reichstadt, and Napoleon’s exploits everywhere blazoned forth.

“Proceeded to the Cathedral Notre Dame. A circle congregated near the entrance, listening apparently with much delight, to a man and woman singing a romaunt (ballad); the man at the same time accompanying on a tambourine, and a boy playing on the violin. No service in the cathedral. On the opposite side stood a group round an Italian, playing on a barrel organ, and a woman singing a humorous ballad, in which naughty things were repeated of a priest and a woman in the Rue Montmartre. Passed on to the site of the archbishop’s palace, not one stone left over another – glorious privilege of a revolution, destruction without accountability. Came over the Pont neuf to the Palais-Royal, great crowds in the garden and in the Cabinets de lecture, reading newspapers, and talking politics. We read the journals. Dined at the Café de Chartres, waiters doubly active, it being Sunday. We left the restaurant, like all the world for a café, sipped a demi-tasse and petit-verre. Went to the Theatre Français.” (1)

Mass was performing; but the congregation consisted of only nine old women, three old men, seven little girls, and four boys, with three deformed beggars at the doors.