Louis XVIII le Desiré (the Desired), King of France, was born in the wrong place and time. He had to flee his country as his brother and sister-in-law were guillotined in the French Revolution. He then spent years shuffling around Europe while Napoleon ran France. Louis XVIII barely had time to warm the throne before he again had to flee Paris, after the humiliation of watching his army desert him for Napoleon. 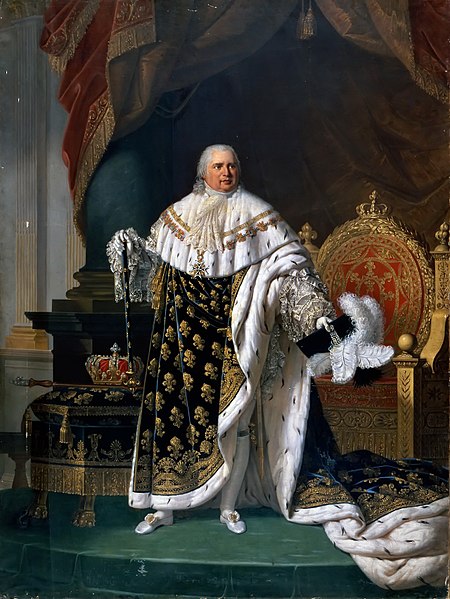 When writing Napoleon in America, I must confess to developing a fondness for Louis XVIII. I put this down to a combination of feeling sorry for the guy and an admiration for his stoicism and his ability to keep a sense of humour in lousy circumstances. People generally made fun of him. He was said to be “as big as a barrel” (1). Playing on the French pronunciation of his title – Parisians called him “Louis des huîtres” (Oyster Louis). (2)

Louis XVIII never expected to become king. He was born Louis Stanislas Xavier, a member of France’s ruling House of Bourbon, on November 17, 1755 at the Palace of Versailles. He was given the title of Count of Provence. His grandfather, Louis XV, was king of France. Louis’s father died in 1765, so when Louis XV died in 1774, Louis’s older brother became King Louis XVI. 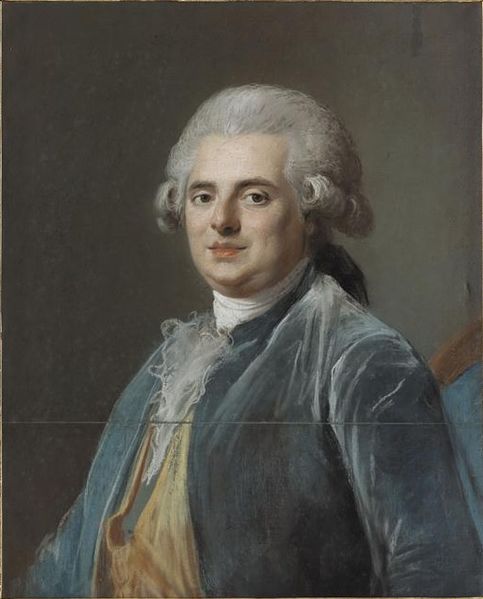 The Count of Provence (future Louis XVIII), by Adélaïde Labille-Guiard, 1788

During the French Revolution, Louis and his wife, Marie Joséphine of Savoy, fled to the Austrian Netherlands. When Louis XVI was executed in January 1793, Louis (the Count of Provence) declared himself regent for his nephew, Louis Charles. In the eyes of the royalists, this young son of Louis XVI and Marie Antoinette was now Louis XVII. In practice the boy was a prisoner in the Temple. When he died there at age 10 in 1795, the Count of Provence took the title Louis XVIII.

In exile, Louis XVIII moved with his entourage through Germany, Italy, Russia and Prussia before winding up in England in 1807. He stayed briefly at Gosfield Hall in Essex, and then settled into Hartwell House in Buckinghamshire. His niece, the Duchess of Angoulême (Louis XVI’s daughter), and her husband, the Duke of Angoulême (son of Louis’s younger brother, the Count of Artois), accompanied him. The Count of Artois also lived in England, but preferred to stay in London. The Prince Regent (later George IV) was generous to the exiled Bourbons, granting them large allowances.

In 1800, Louis XVIII wrote to Napoleon (then First Consul of France), urging him to restore the Bourbons to the throne. Not surprisingly, Napoleon refused.

Louis XVIII’s wife Marie Joséphine died in 1810. Though they were said not to be close (you can read about one well-known spat on the This is Versailles blog), he did miss her. In early 1811, he wrote:

I am already at the point where I believe I shall remain – ‘no more tears – no more pangs of sorrow,’ but a sincere regret, a void in my life which I feel a hundred times a day. A thought occurs to me – sad, or gay, or indifferent – no matter, a recollection of something old, or an emotion at something new; I find myself saying mechanically I must tell HER this, and then I recollect my loss, the illusion vanishes, and I say to myself, the day of those soft intercourses is gone for ever. All this does not hinder my sleeping and eating, nor taking part in the conversation, nor even laughing when the occasion occurs; but the sad thought that she is gone forever mixes itself with everything, and, like a drop of wormwood in food or drink, embitters the flavour without entirely destroying it. (3)

After the allied troops entered Paris in 1814, forcing Napoleon’s abdication, Louis XVIII assumed the throne of France. On the balcony of the Tuileries Palace Pavilion d’Horloge, in response to the acclamations of the crowd, Louis pressed the Count of Artois and the Duchess of Angoulême theatrically to his heart. During these embraces he grumbled: “Scoundrels! Jacobins! Brutes!” The Duchess burst out laughing, which caused the people to cheer even more. (4)

It must be allowed that Napoleon was a very good tenant; he made everything most comfortable; he has arranged everything excellently for me. (5)

The occupying armies demanded that Louis rule not as an absolute monarch like his forebears, but as a constitutional monarch. Louis viewed the royal authority as derived from God rather than from a contract between king and people. He thus made the constitution (the Charte or Charter of 1814) a free grant of the King, instead of an agreement between him and his subjects. This gave him more power than the British king. Still, the Charter included many progressive provisions and established a legislature composed of the Chamber of Deputies and the Chamber of Peers.

When Napoleon escaped from Elba and returned to France in March 1815, Louis was not particularly worried. However, there were still many Bonapartists in the French army and they quickly defected to their Emperor. Louis again fled Paris for the Netherlands. After Napoleon’s defeat at the Battle of Waterloo in June 1815, the allies decided that Louis XVIII should be restored to the French throne.

During the second restoration, the Bourbons purged Napoleon’s supporters from the government and the military. Several prominent Bonapartists were executed. In general, though, Louis wanted to avoid bloodshed. He had learned from Napoleon’s successful return to France the danger posed by the ambitions and prejudices of the ultra-royalists, led by the Count of Artois, who wanted to reclaim their privileges under the ancien régime. Louis XVIII tried to reconcile the progress of the Revolution with the return to monarchy. Unfortunately, the ultra-royalists gained the upper hand after the Count of Artois’s son, the Duke of Berry, was assassinated in 1820.

Louis spent the latter part of his life (except when carried behind four galloping horses for his daily drive through the streets of Paris) in an armchair behind his writing table, helpless and in almost continual pain. Still he was able to jest:

My walk today from my dressing-room was extremely weakly, so that I gave up my intention of receiving the Ambassadors standing, not wishing ‘to show the nations Mithridates destroyed,’ so I told everyone this. But when I had lunched I felt rather more strength. I made a little trial, and this succeeded, which encouraged me. After Mass, I had myself rolled to the door of the throne-room. There I got up and walked to my armchair, where I waited for the gentlemen; and when they had finished their salutes, which I did not wish to receive standing, as that would have been too tiring, I got on to my legs again, and made the tour of Europe; then I bowed and went to get again into my chair where it was waiting for me. … [T]he essential thing is not to appear too ridiculous and I flatter myself that I was not that. (6) 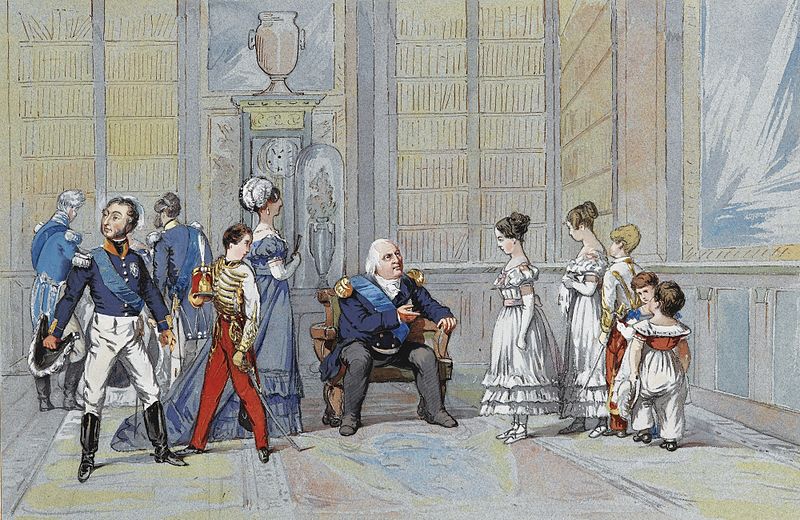 Louis was a prodigious reader. He wrote a dissertation on Horace, his favourite author, whom he frequently quoted. He also translated Walpole’s Historic Doubts on the Life and Reign of Richard III.

Louis XVIII suffered from obesity, gout and gangrene. He died on September 16, 1824 at the Tuileries Palace in Paris at the age of 68. To read his last words, see my post on last words of famous people. Unlike Napoleon, Louis XVIII died while still ruling, the only French monarch of the 19th century to do so. His grave is at the Basilica of St. Denis in Paris. As Louis had no children, he was succeeded by the Count of Artois, known as Charles X.

Though Louis was painted in his coronation robes (see the image above), he was never crowned. Read Napoleon in America to find out why.

His misfortunes never wrung from him the smallest concession. His pride grew with his abasement; his diadem was his name. He seemed to say ‘Kill me, you will not kill the centuries inscribed on my forehead.’