Despite his skill as a military commander, Arthur Wellesley, the 1st Duke of Wellington, was not particularly adept at handling a gun. This led to some noteworthy incidents after he retired from the battlefield. 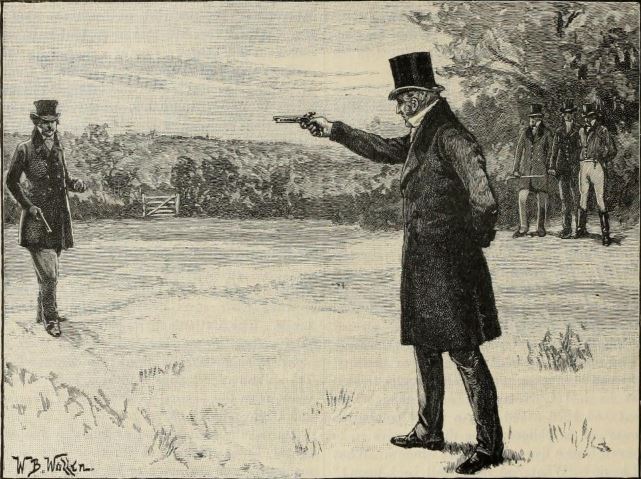 The duel between the Duke of Wellington and the Earl of Winchilsea, 1829

When the Duke of Wellington shot an old woman

In October 1819, the Duke of Wellington went on a shooting party at Maresfield Park in Sussex with his host, Sir John Shelley, and others. Lady Frances Shelley joined the shooters in the afternoon.

They told me that after I came the Duke shot far better than he had done in the morning. Bad was the best, however; for he had contrived to empty two powder horns and a half, with very little to show for it.

If truth be told, the hero of Waterloo was a very wild shot. After wounding a retriever early in the day, and, later on, peppering the keeper’s gaiters, he inadvertently sprinkled the bare arms of an old woman who chanced to be washing clothes at her cottage window! I was attracted by her screams, and the fearful ejaculations caused by pain and fear. I took in the situation at a glance, and went to the cottage door.

‘My good woman!’ said I, ‘this ought to be the proudest moment of your life. You have had the distinction of being shot by the great Duke of Wellington!’

‘Oh! La!’ exclaimed the old woman, as she glanced towards the Duke with eyes full of tears, not knowing whether to be proud or angry. Then suddenly her face was wreathed in smiles, as the contrite Duke slipped a golden coin into her trembling hand! (1)

After watching the Duke shoot for a while, the Shelleys’ young daughter, Fanny, became so frightened that she burst into tears.

‘What’s this, Fanny?’ exclaimed Lady Shelley. ‘Fear, in the presence of the hero of Waterloo! Fie! Stand close behind the Duke of Wellington: he will protect you.’

Fanny “was then too young to realise that it was probably the only safe place.” (2)

When the Duke of Wellington shot Lord Granville

In January 1823, at Wherstead Park in Suffolk, the Duke of Wellington had another shooting accident. This time the victim was his host, Lord Granville Leveson-Gower.

The Noble Lord had a large party of friends, to enjoy the sports of the field. …[T]hey were out scouring a wood. The morning was hazy, and the Duke of Wellington was so intent on his game, that he lost sight of the party, and in firing his double-barrelled gun, his Grace unfortunately lodged a part of the contents in the face of his Noble Host; seven swan shot entered the cheeks, and one the nose. His Grace, hearing an exclamation of ‘I am shot,’ threw down his piece and hurried to the spot, where he found his friend leaning against a tree, the face streaming with blood. One of the party galloped off to Ipswich for medical aid, whilst the others carried the wounded Nobleman to the lodge. A surgeon in less than an hour attended, extracted the shot, and pronounced the Noble patient to be not in any danger. (3)

According to Lord Granville’s son, who was then seven years old:

Our pretty nurserymaid burst into the nursery, ‘The Duke of Wellington has shot Lord Granville.’ It was true, and after the Duke had shot two dogs, my father received the full charge at a short distance in his face, one shot passing through his nose without touching the eye. Some were extracted, but many remained in his body during his life. (4)

Foster Barham Zincke, a later vicar of Wherstead, knew a beater who was present at the accident, as well as the surgeon who extracted the shots.

The Duke was in the meadow; Lord Granville was in the wood. The wood rises rather sharply from the meadow. The Duke fired at a pheasant as it rose above the underwood. The elevation, however, was not sufficient to carry the charge above Lord Granville, who was on much higher ground than the Duke. Fortunately he was struck on the side of the head, one shot even passing through his nose. Had he been struck in the full face his sight might have been totally destroyed. Eleven shots were extracted. It is evident that Lord Granville was where he ought not to have been. The tradition is that this was the only point in the mishap which the iron disciplinarian regarded as material, and so he could not refrain from saying to his bleeding host: ‘If you had not been where you had no business to have been, it could not have happened.’ (5)

It is shortly after this episode that the Duke of Wellington (fictionally) attends Dorothea Lieven’s dinner party in Napoleon in America. 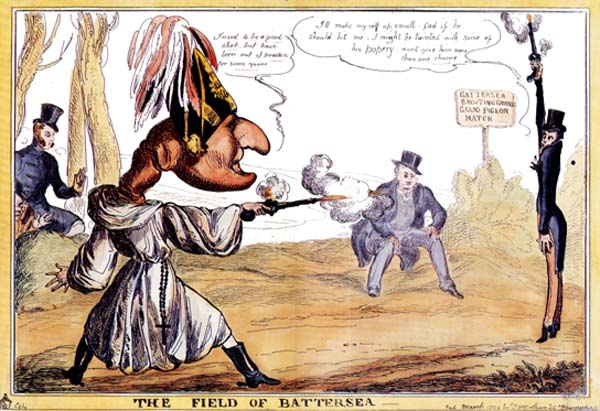 The Field of Battersea, caricature of the duel between the Duke of Wellington and the Earl of Winchilsea (drawing by W. Heath, published by Thomas McLean, 1829)

Wellington took his most famous peacetime shot in March 1829 at Battersea Fields – now Battersea Park in London. He was 59 years old and Prime Minister of the United Kingdom. His gun was pointed in the direction of 37-year-old George Finch-Hatton, 10th Earl of Winchilsea (or Winchelsea) and 5th Earl of Nottingham.

Winchilsea was a notably right-wing member of Wellington’s party in the House of Lords. He and other “Ultra-Tories” strongly opposed the decision of Wellington’s government to pass a bill that would allow Catholics to sit in Parliament. On March 14, 1829, Winchilsea wrote a letter – published two days later in the Standard newspaper – in which he accused Wellington of having secretly been a convert to the policy of Catholic emancipation for some time. Winchilsea questioned Wellington’s motives and accused him of deceiving his party, so that he “might the more effectually, under the cloak of some outward show of zeal for the Protestant religion, carry on his insidious designs for the infringement of our liberties, and the introduction of Popery into every department of the State.” (6)

In a letter to Winchilsea dated March 19, Wellington wrote:

No man has a right, whether in public or in private, by speech or in writing, or in print, to insult another by attributing to him motives for his conduct, public or private, which disgrace or criminate him. (7)

He sought a written expression of regret from Winchilsea. When the latter refused to provide one, Wellington challenged him to a duel.

They met at Battersea Fields at 8 o’clock in the morning on March 21. Wellington’s second was Sir Henry Hardinge, Secretary at War. Winchilsea’s was Edward Boscawen, 1st Earl of Falmouth, another Ultra-Tory. Wellington’s physician, John Robert Hume, was the attending doctor. Neither Wellington nor Hardinge owned a set of duelling pistols, so Hardinge requested some from Dr. Hume. The latter didn’t realize that it was Wellington who was going to duel until the Duke appeared on horseback at Battersea.

Since Hardinge had lost his left hand at the Battle of Waterloo, Dr. Hume prepared and loaded the pistols for him. Falmouth “seemed a good deal agitated” – likely from the thought that he might be party to the death of England’s great hero and Prime Minister – so Hume offered to load for him too, but Falmouth managed to complete the task on his own. (8)

When Hardinge gave the command to fire, Winchilsea kept his pistol arm down at his side. Wellington fired at Winchilsea, who remained “steady and fearless…without making the slightest movement or betraying any emotion.” (9) The shot missed him. Winchilsea then lifted his pistol above his head and fired into the air. Falmouth afterwards took from his pocket a letter in which Winchilsea expressed regret at having published an opinion that had given offence to the Duke. Wellington insisted on the word “apology” being added. When – after some discussion – this was finally done, Wellington “touched the brim of his hat with two fingers, saying, ‘Good morning, my Lord Winchilsea; good morning my Lord Falmouth,’ and mounted his horse.” (10)

Did Wellington intend to hit Winchilsea, or did he deliberately miss him? According to Wellington’s cabinet colleague Lord Ellenborough:

The Duke said he considered all the morning whether he should fire at [Winchilsea] or no. He thought if he killed him he should be tried, and confined until he was tried, which he did not like, so he determined to fire at his legs. He did hit his coat. (11)

Hume – who wrote a detailed account of the event – said nothing about hitting a coat. Rather:

The Duke raised his pistol and presented it instantly on the word fire being given; but, as I suppose, observing that Lord Winchilsea did not immediately present at him, he seemed to hesitate for a moment, and then fired without effect. (12)

Winchilsea told an acquaintance that “he felt the wind of the Duke’s bullet…unpleasantly close to the curls of his hair.” (13) Wellington told his biographer that, upon seeing that Winchilsea did not intend to fire at him, “I turned my pistol aside and fired wide of him.” (14) Given the Duke’s poor shooting record and the fact he had no practice with the duelling pistols, Winchilsea was lucky in either case.

4 commments on “The Duke of Wellington’s Shooting Adventures”

If truth be told, the hero of Waterloo was a very wild shot.