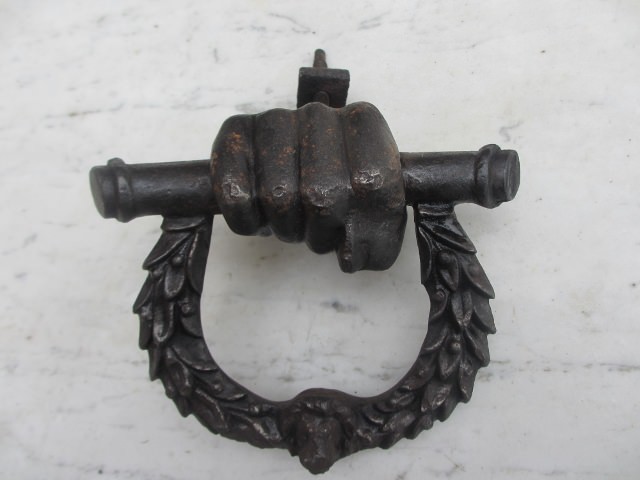 Napoleon in America opens with a knock on a door, disturbing Sir Hudson Lowe at his toilet. Though that particular door on St. Helena did not sport a door knocker inspired by the Duke of Wellington, many doors in England did. Door knockers were a common feature of 19th-century life, until they were replaced by the electric doorbell.

The Wellington Door Knocker was invented by David Bray, an ironmonger located at 16 Cranbourn Street in Leicester Square, London.

Bray’s Wellington Door Knocker [represents] the Hand of our immortal Hero grasping the Wreath of Victory, and the Baton of Field Marshal, as being the highest rank that can be conferred on military fame: the Lion’s face represents British valour overpowering the arms of Tyranny and Usurpation, by striking on the breast of its bitterest enemy, the French Eagle, who was at first knocked under by the prowess of its noblest adversary, the British Lion, and annihilated by our magnanimous and generous Allies. To be had in Brass, Bronzed, or Japan. (1)

Bray first offered the door knocker for sale in May 1814, shortly after Napoleon’s exile to Elba. Thus Bray was honouring the Duke of Wellington’s victories in Spain and Portugal, rather than his subsequent triumph in the Battle of Waterloo. This last victory, in June 1815, added to the door knocker’s popularity.

A correspondent observes that one of the most ingenious and pleasing inventions of the present day is assuredly the Wellington Door-knocker; exclusive of the unique elegance of the article, the design is truly appropriate to the fame of our immortal hero, and has this peculiar circumstance attending it, that every knock brings home to the bosom the recollection of the heroic deeds achieved at Waterloo, and the final downfall of the enemy of the rights and liberties of mankind. (2)

The decline of door knockers

The Duke of Wellington’s death, in 1852, generated another spike in the sale of Wellington memorabilia, including the Wellington Door Knocker. By the late 1800s, however, door knockers had gone out of fashion, thanks to the availability of electric doorbells.

Door bells are a relatively modern invention and have only come into general use in London since the introduction of the electric button. Down to a quarter of a century ago the only modish means of summoning domestics to attend the house door were knockers, and in the fashionable districts, as well as in those populated by the humbler classes, every house door was adorned with a knocker of a more or less ornate character. The bells, such as they were, were reserved exclusively for the servants’ area and for the kitchen use, and in those days anybody possessed of social pretensions would have considered it as an infraction of dignity and self-respect to announce his or her presence at the entrance otherwise than by means of the knocker.

The knocking went on all day long and constituted so important a feature of metropolitan existence that it is difficult to realise how in the world it can have been so easily dispensed with and banished from the doors of all save the aristocracy. Thus, if there was a person who had died in the house, the knocker was ornamented with a bow of crape; if a birth had taken place a white glove on the knocker announced the fact, while if any one was killed the knocker was swathed in felt, and a marriage was proclaimed by a bunch of flowers fastened to the knocker.

Each caller at the house had his own particular knock. There was the postman’s knock and the doctor’s knock and the tax and rate collector’s knock, and the knock of the master of the house. In fact, there was no end to the number of characteristic signals of this kind, and in long streets the noise of these knockers was as uninterrupted as it was deafening. …

Nowadays knockers are only to be found on the doors of distinguished people, and their presence there generally indicates a taste for art and archaeology on the part of the owner of the mansion. (3)

Door knockers were a common object of theft, and not only by the lower classes.

Knockers…constituted an important feature of sport and entertainment to the youth of the metropolis. Much of the watchfulness on the part of the police detailed for night duty was devoted to the preservation of the knockers from being stolen. Knocker-wrenching was a favourite form of diversion for rich and poor alike, and an aristocrat as well as shop boy looked upon the stolen knockers that constituted the trophies of his midnight prowess much in the same way as an Indian brave was wont to regard his collection of scalps.

First and foremost among these knocker-wrenchers was Lord Charles Beresford, though he was run close by his brother, Lord ‘Bill.’ Some of the knockers were such large brass affairs, and were fastened so firmly to the doors, that they defied the efforts of the marauders. Of such a nature were the big bronze dolphins which serve as knockers to the doors of the town house of the Marquis of Bath, on the west side of Berkeley Square. Lord Charles had tried several times to wrench off these particular knockers, but without success.

Determined not to be baffled, he hit upon another plan. Late one night he drove up with his intimate friend and chum in a hansom to the residence of Lord Bath. By the initiated the features of the cab driver might have been recognised as those of Lord Ribblesdale. As soon as the hansom halted, Lord Charles hopped out, carrying a stout rope. One end of this was attached to the knockers and the other to the body of the cab, the titled driver then being ordered to ‘whip up.’ This he did. The horse sprang forward and out came not only the knockers, but also the panels of the door.

An exploit of this kind could not be long kept secret, and very soon Lord Bath was in possession of the names of the robbers. What next followed was wrapped in mystery, but before a week had elapsed knockers and panels had disappeared from the bachelor ‘diggings’ of Lord Charles and had been restored to their proper place in the doors of the Bath mansion in Berkeley Square. (4)

The decline of door knockers was accompanied by the loss of other adornments.

With knockers have also disappeared those hatchments which down to twenty years ago adorned the facades of so many London houses. These hatchments consisted of large black frames, four or five feet in each direction, enclosing a panel entirely black, or else a black and white ground upon which were painted the arms and crest. …

Lastly the curious old custom of finger plates on doors is following knockers and hatchments into oblivion, though it is to be confessed that the plates are dying harder than either of the two latter relics of good old times. They were introduced in the days when drunkenness was considered good form and sobriety as discourteous. They were placed above and below the knob of the door mainly with the object of enabling gentlemen coming home late to get their bearings when they wished to open a door. This being the case, one might have imagined that they were no longer of any use in the present mild era of lemon squash and weak claret. But this is not the case. Instituted for the use of the masters of the house, they are preserved in many mansions in London for the benefit of the servants, who are proverbially unable to open a door by the part provided for the purpose, namely the handle. Doors are frequently painted a delicate white and cream, or else made of some satin wood, on which the imprint of every hand in the least bit soiled remains. The servants, as a rule, are not as particular about their personal cleanliness as are their masters and mistresses, and it is with the object of preventing them from leaving traces of this nature upon the beautiful woodwork in opening and shutting the doors that finger plates are still maintained in many of the houses of the aristocracy in London. (5)

If you would like to revive the door-knocking tradition with your own Wellington Door Knocker, visit Charles Graham Architectural Antiques and Fireplaces, who kindly provided permission to use the image at the top of this article (see product reference DF06).

How to Spend Summer in London in the Early 19th Century

The knocking went on all day long and constituted so important a feature of metropolitan existence that it is difficult to realise how in the world it can have been so easily dispensed with and banished from the doors of all save the aristocracy.