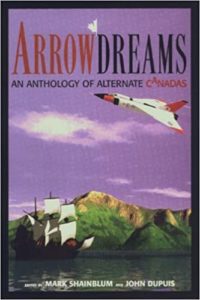 An example of an alternate history book by Canadians

This list is intended to be a starter, rather than exhaustive. It includes a sample of alternate history books by Canadians published in English within the last four decades. It leaves out many alternate histories by Canadians that fall more into the science fiction, steampunk, fantasy, or time travel categories, as well as books intended primarily for children and teenagers, and books published in French. Some of the authors on the list might surprise you, either because you didn’t realize they were Canadian, or because you’re used to seeing their names in another context.

The Draka Series by S.M. Stirling (1988-2000)
What if British Loyalists escaped to South Africa after the American Revolution, rather than to Canada?

The Difference Engine by William Gibson and Bruce Sterling (1990)
What if Charles Babbage perfected his Analytical Engine during the Industrial Revolution and the computer age arrived a century ahead of its time?

The Years of Longdirk Trilogy by Dave Duncan writing under the name of Ken Hood (1995-1997)
What if Ogedai Khan did not die in 1241 and the Mongols continued their advance into and conquest of Europe?

Darwinia by Robert Charles Wilson (1998)
What if Europe and parts of Asia and Africa were suddenly replaced by a vast alien wilderness in 1912?

Arrowdreams: An Anthology of Alternate Canadas edited by Mark Shainblum and John Dupuis (1998)
An anthology of Canadian “what-ifs.”

The Neanderthal Parallax Trilogy by Robert J. Sawyer (2002-2003)
What if Neanderthals became the dominant branch of humanity on Earth in a parallel universe?

Conquistador by S.M. Stirling (2003)
What if the Europeans never conquered the Americas?

The Peshawar Lancers by S.M. Stirling (2003); sequel: Shikari in Galveston (2005)
What if the world was hit by some comet fragments in 1878, depopulating much of the Northern Hemisphere?

War Plan Crimson by Michael Cnudde (2011)
What if an attempt by a group of Wall Street power brokers to overthrow Franklin Roosevelt in 1933 had succeeded?

Faultline 49 by Joe MacKinnon writing under the name of David Danson (2012)
What if the September 11, 2001 bombings happened in Edmonton with American perpetrators?

Napoleon in America by Shannon Selin (2014)
What if Napoleon escaped from St. Helena and wound up in the United States in 1821?

All Our Wrong Todays by Elan Mastai (2017)
What if the invention of a unlimited-energy producing system in the 1960s led to very rapid technological advancement?

Agency by William Gibson (2018)
What if Hillary Clinton beat Donald Trump in 2016, and Britain voted “remain” in the EU referendum?

Tales from the Black Chamber Series by S.M. Stirling (2018-2022)
What if Theodore Roosevelt became president of the United States in 1912?

The Oppenheimer Alternative by Robert J. Sawyer (2020)
What if physicist J. Robert Oppenheimer and the team of scientists behind the Manhattan Project had to direct their nuclear weapon expertise towards protecting Earth from the sun?

The Good German: A Novel by Dennis Bock (2020)
What if German anti-fascist Georg Elser succeeded in assassinating Adolf Hitler in November 1939?

Billy (the Kid) by Peter Meech (2020)
What if Sheriff Pat Garrett hadn’t shot and killed William Bonney in 1881?

I invite readers to add other alternate history books by Canadians in the comments.