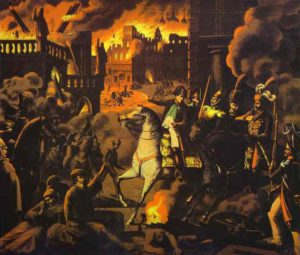 Napoleon at the burning of Moscow in 1812. What if the fire hadn’t happened?

If his father had not died young

If my father, who died before he attained the age of forty, had survived some time longer, he would have been appointed deputy from the Corsican nobility to the Constituent Assembly. He was much attached to the nobility and the aristocracy; on the other hand, he was a warm partisan of generous and liberal ideas. He would, therefore, have been entirely on the right side, or at least in the minority of the nobility. At any rate, whatever might have been my own personal opinions, I should have followed my father’s footsteps, and thus my career would have been entirely deranged and lost. (1)

If his invasion force had reached England

Between 1803 and 1805 Napoleon gathered an army of 200,000 men on the north coast of France and built a flotilla of barges with the intention of invading England. He called the invasion off when his plan to gain temporary control of the English Channel failed.

Had I succeeded in effecting a landing, I have very little doubt that I should have accomplished my views. Three thousand boats, each to carry twenty men and one horse, with a proportion of artillery were ready. Your [the British] fleet having been decoyed away…would have left me master of the Channel…. Four days would have brought me to London. In a country like England, abounding in plains, defence is very difficult. I have no doubt that your troops would have done their duty, but one battle lost, the capital would have been in my power. You could not have collected a force sufficiently strong to beat me in a pitched battle. Your ideas of burning and destroying the towns, and the capital itself, are very plausible in argument, but impracticable in their accomplishment. You would have fought a battle and lost it. …

I would have offered you a constitution of your own choice, and have said ‘Assemble in London deputies from the people to fix upon a constitution.’ I would have called upon Burdett and other popular leaders to organize one according to the wishes of the people. I would have declared the [king] fallen from the [throne], abolished the nobility, proclaimed liberty, freedom, and equality.

Think you, that in order to keep the house of [Hanover] on the [throne] your rich citizens, merchants, and others of London, would have consented to sacrifice their riches, their houses, their families, and all their dearest interests, especially when I had made them comprehend that I only came to [send the king] away, and to give them liberty? No, it is contrary to history and to human nature…. Your principal people have too much to lose by resistance, and your canaille too much to gain by a change. If…they supposed that I wanted to render England a province of France, then indeed l’esprit national would do wonders. But I would have formed a republic according to your own wishes, required a moderate contribution, barely sufficient to have paid the troops, and perhaps not even that. Your canaille would have been for me knowing…that I am the man of the people, that I spring from the populace myself, and that whenever a man had merit or talent, I elevated him without asking how many degrees of nobility he had; knowing, that by joining me, they would be relieved from the yoke of the aristocracy under which they labour. (2)

If he had known warships could transport a lot of water

[Admiral Plampin] says that a seventy-four gun ship will take about eighty tons more water by means of the tanks. Had I known this in 1806 or 1808, I would have sent an army of thirty-thousand men to invade India. I had made several calculations about the possibility of sending so large a body of men to India, but always found that they would have been short of water for a month. …

In Brest, I had at one time as many as fifty-six sail of the line, and often forty-six. In forty of these line-of-battle ships, I intended to have dispersed thirty thousand soldiers, eight hundred in each, and only four hundred sailors. There were to have been a proportionate number of frigates and other smaller vessels. Ten of the line-of-battle ships would have been old and of little value. They were also to take on board six or eight hundred dismounted cavalry, and a portion of artillery, with everything necessary for an army to take the field, and be provisioned for four months. They were to make the best of their way to the Isle of France, where they would have watered and provisioned afresh, landed their sick, and taken on board some other troops to replace them, with three thousand blacks to form colonial regiments. From thence they were to have proceeded to India, and to have disembarked in the nearest possible place, so as to have allowed the Mahrattas, with whom I had an understanding to join them. They were to form the cavalry of the army. A few of the French were also to be mounted, and all the horses they could procure purchased. After landing, they were to have burnt the ten old ships, and divided their crews amongst the rest, who would have been thus full manned. They would then proceed in different directions, and do you all possible mischief in your settlements. …

All this plan, however, was frustrated by the calculations I had made, which showed me that the ships must fall short of water by a month. Had I known of those tanks, I certainly would have made the attempt. (3)

If Moscow had not been burnt

In 1812, Napoleon invaded Russia. He made it as far as Moscow, only to find that the Russians had evacuated the city. Fires set by Russian saboteurs then destroyed most of Moscow. Napoleon retreated without having attained a decisive victory. The failure of the Russian campaign is considered one of the reasons for Napoleon’s downfall.

[If Moscow had not been burnt] I should then have held up the singular spectacle of an army wintering in the midst of a hostile nation. … On the first appearance of fine weather, I should have marched against the enemy: I should have beaten them; I should have been master of their empire. [Russian Tsar] Alexander, be assured, would not have suffered me to proceed so far. He would have agreed to all the conditions which I might have dictated, and France would then have begun to enjoy all her advantages. And, truly, my success depended upon a mere trifle. For I had undertaken the expedition to fight against armed men, not against nature in the violence of her wrath….

Peace, concluded at Moscow, would have fulfilled and wound up my hostile expeditions. It would have been with respect to the grand cause, the term of casualties and the commencement of security. A new horizon, new undertakings, would have unfolded themselves, adapted, in every respect, to the well-being and prosperity of all. The foundation of the European system would have been laid, and my only remaining task would have been its organization.

Satisfied on these grand points, and everywhere at peace, I should have also had my Congress and my Holy Alliance. These are plans which were filched from me. In that assembly of all the sovereigns, we should have discussed our interest in a family way, and settled our accounts with the people, as a clerk does with his master. …

On my return to France…I would have proclaimed the immutability of boundaries; all future wars as purely defensive, all new aggrandizement as anti-national. I would have associated my son with me in the empire; my dictatorship would have terminated and his constitutional reign commenced.

Paris would have been the capital of the world, and the French the envy of nations! … My leisure and my old age would have been devoted, in company with the Empress, and, during the royal apprenticeship of my son, to visiting slowly and with our own horses, like a plain country couple, every corner of the empire; to receiving complaints, redressing wrongs, founding monuments, and doing good everywhere and by every means! (4)

If things had gone differently at the Battle of Waterloo

On June 18, 1815, Napoleon was defeated at the Battle of Waterloo by a coalition of British, German, Dutch-Belgian and Prussian forces led by the Duke of Wellington and Prussian Field Marshal Gebhard von Blücher. I have already written about Napoleon’s general thoughts on the battle. Here are a few of his alternate history speculations.

If Marshal Blucher had not arrived at eight with his first and second corps, the [French] march on Brussels with two columns, during the battle of the 17th, would have been attended with several advantages. The left would have pressed upon and kept in check the Anglo-Dutch army; the right, under the command of Marshal Grouchy, would have pursued and restrained the operations of the Prusso-Saxon army; and in the evening the whole of the French army would have effected its junction on a line of less than five leagues from Mont Saint Jean to Wavres, with its advanced posts on the edge of the forest. …

The horse grenadiers and dragoons of the guard, under the command of General Guyot, engaged without orders. Thus at five in the afternoon, the army found itself without a reserve of cavalry. If, at half past eight, that reserve had existed, the storm which swept all before it on the field of battle would have been dispersed, the enemy’s charges of cavalry driven back, and the two armies would have slept on the field, notwithstanding the successive arrivals of General Bulow and Marshal Blucher: the advantage would also have been in favour of the French army, as Marshal Grouchy’s 34,000 men, with 108 pieces of cannon, were fresh troops and bivouacked on the field of battle. The enemy’s two armies would have placed themselves in the night under cover of the forest of Soignes. …

If Marshal Grouchy had encamped in front of Wavres in the night between the 17th and 18th, no detachment could have been sent by the Prussians to save the English army, which must have been completely beaten by the 69,000 French opposed to it. (5)

If he had made his brother governor of Corsica

When Napoleon escaped from Elba and returned to France in 1815, his brother Joseph advised him to appoint their younger brother Lucien as governor of Corsica, which is where Napoleon and his family came from. Lucien would thus have been in that position when Napoleon was defeated at Waterloo.

If Lucien had gone to Corsica, he would still have remained master of the Island, and what resources would it not have presented to our persecuted patriots? To how many unfortunate families would not Corsica have afforded an asylum? [Napoleon] repeated that he had perhaps committed a fault, at the time of his abdication, in not reserving to himself the sovereignty of Corsica, together with the possession of some millions of the civil list; and in not having conveyed all his valuables to Toulon, whence nothing could have impeded his passage. In Corsica, he would have found himself at home; the whole population would have been, as it were, his own family. He might have disposed of every arm and every heart. Thirty thousand or even 50,000 allied troops could not have subdued him. (6)

8 commments on “Alternate History by Napoleon”

Four days would have brought me to London. In a country like England, abounding in plains, defence is very difficult. I have no doubt that your troops would have done their duty, but one battle lost, the capital would have been in my power.