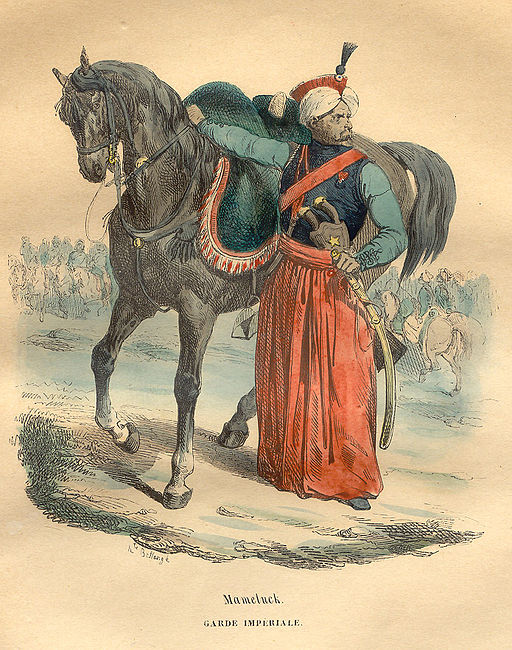 A mameluke from the Imperial Guard of the Grande Armée, by Hippolyte Bellangé, 1843

Napoleon called Louis Étienne Saint-Denis (his French-born servant) Mameluke Ali and required him to dress in the style of the mamelukes, the slave horsemen of the Ottoman Empire. Saint-Denis went to Russia with Napoleon, joined Napoleon on Elba, returned to France for the “Hundred Days,” and accompanied Napoleon into exile on St. Helena, where he served as second valet and as Napoleon’s librarian.

From Versailles to the Emperor

Louis Étienne Saint-Denis was born on September 22, 1788 at Versailles, where his father served King Louis XVI as an overseer of the royal stables. His mother was the daughter of an officer of the royal kitchens. According to family lore, Saint-Denis’ maternal grandfather once made a bird cage out of nougat, containing a real bird. The concoction was placed on the table at a court fête. When the nougat was broken, the bird flew out and perched on Marie Antoinette’s head. (1)

Saint-Denis became a clerk in a notary’s office in Paris. In 1806, his father secured him a position in Napoleon’s stables. In December 1811, Saint-Denis entered the Emperor’s personal service.

I was taught to make the bed of the master of Europe, and to arrange everything that he needed, and which he might ask for in his apartment. At breakfast I waited on the Emperor directly; at dinner I gave the pages who waited the plates, the knives and forks and the dishes which they had to hand. It did not take me long to master my new employment…which [demanded doing] nothing three-quarters of the day. (2)

Louis Étienne Saint-Denis was an assistant to Napoleon’s bodyguard and valet, Roustam Raza. Born in Tbilisi, Georgia, to Armenian parents, Roustam (or Roustan or Rustam or Rostom) was captured by slave dealers when he was a boy. After being sold into slavery at Constantinople, he was taken to Egypt and enrolled as a Mameluke (or Mameluk or Mamluke or Mamluk).

The Mamelukes were the slave horsemen of the Ottoman Empire. In 1768, they became the rulers of Egypt. Although the Mameluke cavalry was among the best in the East, it was no match for the French army, which invaded Egypt under the command of then General Bonaparte in 1798. Still, Napoleon was impressed by the Mamelukes’ courage and fighting skills. He formed a special Mameluke corps in the French army, eventually attached to the Chasseurs-à-Cheval of the Imperial Guard. For details, see “The Georgian Mameluks in Egypt” by Alexander Mikaberidze on the Napoleon Series website  and/or, in French, the discussion on the “Histoire Pour Tous” site.

While Napoleon was in Egypt, Sheik El-Becri of Cairo gave him the gift of an Arabian horse and Roustam. Napoleon appreciated Roustam’s dedication, enjoyed his exoticism and viewed him as a living testimony to his oriental campaign.  Roustam served Napoleon from 1799 until the Emperor’s first abdication in 1814.  Roustam did not accompany Napoleon to Elba.  He later claimed that he feared Napoleon would commit suicide, and that he would be blamed for his death.  Napoleon, however, viewed Roustam’s failure to join him in exile as a betrayal. When Napoleon returned to power in 1815, he refused to take Roustam back into service. For some of Roustam’s memories of Napoleon, see this May 7, 1911 New York Times article.

Since Saint-Denis was appointed as a second to Roustam, Napoleon made Saint-Denis a Mameluke, insisted that he be dressed as a Mameluke, and gave him the name of Ali. As “Mameluke Ali,” Saint-Denis went to Russia with Napoleon, joined Napoleon on Elba, returned to France for the “Hundred Days,” and accompanied Napoleon into exile on St. Helena, where he served as second valet and as Napoleon’s librarian. On October 18, 1819, Saint-Denis married Mary Hall, a young English Catholic who was governess to the Bertrand children. On July 31, 1820 they had a daughter, Clémence, whose godparents were Charles de Montholon and Fanny Bertrand. In Napoleon in America, Louis Étienne Saint-Denis is one of the members of Napoleon’s household questioned by Governor Hudson Lowe about Napoleon’s disappearance from his residence of Longwood.

After Napoleon’s death in 1821, Saint-Denis returned to France with his family. Though Napoleon left Saint-Denis a sizeable sum in his will, this was not paid immediately.  To make ends meet, Saint-Denis left Mary and Clémence temporarily at Versailles, while he worked at a riding school in Paris. A second daughter, Isabelle, was born June 11, 1826, and a third, Napoléone Mathilde, was born in 1827. Eventually the family moved to Sens, in Burgundy.

Saint-Denis did not take any notes during his service with Napoleon. It was only when he had settled at Sens that he began to write his recollections for his family.  These were published in 1922 as Napoleon from the Tuileries to St. Helena; Personal Recollections of the Emperor’s Second Mamluke and Valet, Louis Etienne St. Denis (known as Ali) (French title: Souvenirs du Mameluck Ali sur l’Empereur Napoléon). They provide a generally admiring but often endearingly frank portrayal of Napoleon, as in this passage from St. Helena:

In a moment of irritation the Emperor wished to dress or undress or needed something. He was angry with Marchand and me, I don’t remember why, and said to Marchand, ‘Since you are not willing to wait on me, send me Gentilini; he will wait on me.’ I do not recollect what happened next, but it all ended like the others, whether on one side or the other. There were a few hours of sulkiness, after which the Emperor came back to his habitual good humor and we went on with our service for him as if nothing had happened. (3)

Saint-Denis’ description of Napoleon’s brief flourish of gardening on St. Helena in 1819 is also amusing, as illustrated by these excerpts.

Never had Longwood been so animated as it was while we were working in these gardens; the activity seemed to have revived us. Before, we had lived in a sort of torpor…. [The Emperor] rose at five or half past, and waited very impatiently till the sentries had been withdrawn, to go into the garden. He had the windows of his apartments opened and went to walk in the grove, talking with the valet on duty. As soon as the sun appeared on the horizon he would have everybody waked up. When I was not on duty he would call me by throwing little lumps of earth against the windows of my room, which opened on the grove. ‘Ali! Ali! You sleep!’ and singing, ‘You will sleep more comfortably when you have gone in again,’ he would go on with the song. At the same moment I would open the window. ‘Come, lazybones,’ he would cry when he saw me, “don’t you see the sun?’ Another time he would say, more simple, ‘Ali! Ali! Ah! Ah! Allah! It is day!’ (4)

The result of making the gardens was, for the Emperor, that he kept his people busy, that he amused himself, that he got gardens and walks about his house where he felt at home, and that he removed the guards to a distance, for previously they had been under his very windows. As for the product, it was nil, except that once in a while he had a little bowl of salad, a little dish of beans or peas and a bunch of radishes on his table. As for fruit, there were only peaches, and the Emperor did not eat them. When the Emperor saw something on his table which came from his garden he would say: ‘After all, our trouble has not been wholly lost. Our gardens are feeding us.’ We could not help smiling. ‘What, rascal, are you smiling?’ the Emperor would say, looking at one of those who were waiting on him, and he would smile himself. (5)

In 1840, Saint-Denis was part of the expedition to St. Helena to retrieve Napoleon’s remains and return them to France. He kept a journal of this trip, published as Journal inédit du retour des Cendres (for a discussion of this in French, see Irène Delage’s interview with Jacques Jourquin on the Napoleon Foundation website). In 1854, he was made a knight of the Legion of Honour. Louis Étienne Saint-Denis died on May 3, 1856 at the age of 67. He left to the city of Sens some articles he had preserved in memory of his Emperor, including some books with notations by Napoleon, a cockade from Napoleon’s hat, and a piece of the St. Helena coffin.  He wrote:

My daughters should always remember that the Emperor was my benefactor and, consequently, theirs; the greater part of what I possess I owe to his kindness. (6)

It did not take me long to master my new employment . . . which [demanded doing] nothing three-quarters of the day.