Charles Philippe, the Count of Artois – later Charles X of France – was a wastrel and a reactionary whose behaviour helped to discredit French royalty. As is evident in Napoleon in America, he became a royal pain in the side of his brother, Louis XVIII. 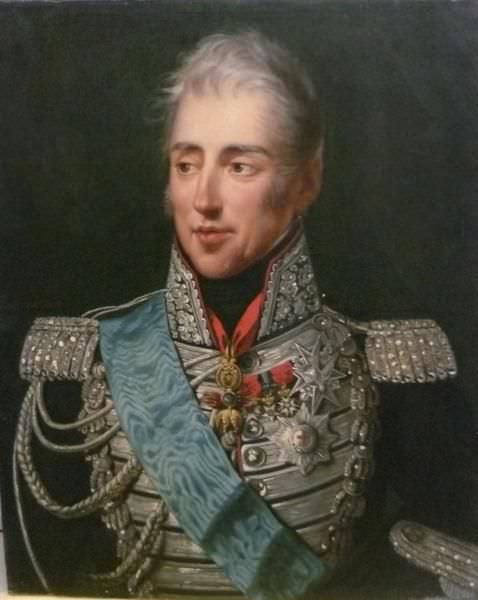 Charles X of France (the Count of Artois) by Robert Lefèvre, 1826

Not expected to be king

Artois was born on October 9, 1757 at the Palace of Versailles. He was a member of the House of Bourbon and the grandson of King Louis XV. With his father and three older brothers ahead of him in line for the throne, no one expected Artois would ever be king. He received no formal education and led an idle and undisciplined life at court. When his grandfather died in 1774 (his father and eldest brother having already passed away), Artois’s brother became King Louis XVI.

The Don Juan of Versailles

The Count of Artois was said to be handsome, charming, generous and impulsive. He was a horseman, a gambler and a playboy – the “Don Juan” of Versailles. (1) Artois was a close friend of Louis XVI’s wife, Marie Antoinette. The two of them indulged in expensive frivolities, like the construction of the Château de Bagatelle. Their activities highlighted the gulf between the royal family and ordinary French people, and added to the unrest that sparked the French Revolution.

In November 1773 Artois married Marie Thérèse of Savoy (the sister of Louis XVIII’s wife). They had two sons: Louis Antoine, the Duke of Angoulême and Charles Ferdinand, the Duke of Berry. The marriage was a dynastic alliance rather than a love match. You can read about Artois’s true love for the married Louise de Polastron on Elena Maria Vidal’s Tea at Trianon blog.

After the storming of the Bastille in July 1789, the Count of Artois and his family left France. He lived briefly in Italy and in Germany before settling in England in 1792. The Prince Regent (later George IV) gave him a generous allowance. Artois lived in London and Edinburgh with Louise. His wife remained on the continent (she died in Austria in 1805). When Louise died of tuberculosis in 1804, Artois reportedly swore a vow of perpetual chastity and became devoted to religion. Nonetheless, it sounds like he retained some of his earlier spirit. In October 1811, Countess Harriet Granville wrote from her estate of Trentham in Staffordshire: “Monsieur forgets we are all beyond our teens and plays at bo-peep, etc. with Lady Stafford and me.” (2) 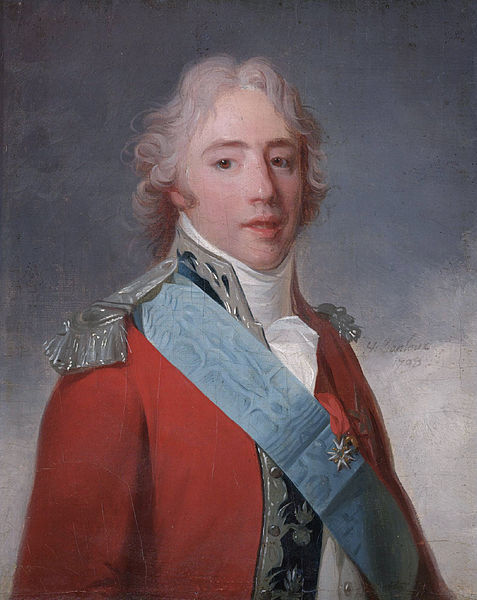 Head of the ultra-royalists

In January 1814, the Count of Artois went to southern France to join the coalition against Napoleon. When the latter abdicated in early April, Artois acted as Lieutenant General of France until Louis XVIII could arrive from England. The Bourbons made clumsy and unpopular attempts to reverse the results of the French Revolution. When Napoleon escaped from Elba and landed in France in March 1815, he was welcomed by the French people. The royal family was again compelled to flee. They were restored to the throne a second time after Napoleon’s defeat at Waterloo in June 1815.

During the Second Restoration Artois emerged as the leader of the ultra-royalists, the party of extreme reaction. He said he “would rather be a woodcutter than reign in the fashion of the King of England.” (3) He disliked Louis XVIII’s Charter and despised the Chambers of Deputies and Peers. French diplomat Pierre de Blacas wrote in 1815:

The Count of Artois has retained from his youth only the lack of character and the feebleness of his spirit; he has ceased to be lovable and light, brilliant and polite. The sworn enemy of liberal ideas, devout and ambitious, this prince burns with desire to become king, but king the way his forefathers were, that is to say, without a constitutional charter. (4)

After the Duke of Berry was assassinated by a fanatic in 1820, the ultra-royalists gained the upper hand. Artois had earlier set up a network of agents and collaborators across France, which functioned as a parallel government to that of Louis XVIII. The king was weary and ultimately gave up trying to resist his brother.

Artois as Charles X of France 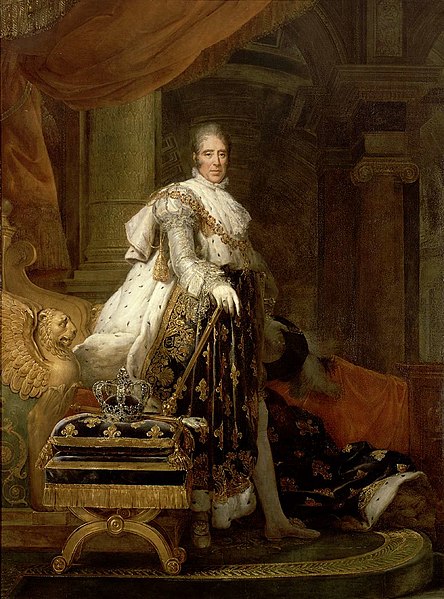 Charles X of France in his coronation robes, by François Gérard, 1825

When Louis XVIII died on September 16, 1824, the Count of Artois became King Charles X of France. At first it appeared that power had softened him. He set out to charm his people. For a while he succeeded, by loosening press censorship among other things. He held a coronation at the cathedral of Reims on May 29, 1825.

Like Louis XVIII, Charles X faced the difficult task of reconciling the old nobility with the reality that many Frenchmen had benefited from the changes brought about by the Revolution and Napoleon. He was less adroit than his brother, however. Charles X believed that nostalgia for the ancien régime was more widespread than it actually was. Determined to crush disloyalty and irreligion, he passed laws that strengthened the power of the nobility and the clergy.

In 1830, following the victory of the opposition in parliamentary elections, Charles X suspended the constitution. He dissolved the Chamber of Deputies, censored the press, restricted suffrage and called for new elections. This provoked the so-called July Revolution, a Parisian uprising against the crown. Charles was forced to abdicate on August 2. He abdicated in favour of his son, the Duke of Angoulême, who promptly abdicated in favour of  Henri d’Artois, the son of the Duke of Berry. Charles X went to England. However the Duke of Orléans, a Bourbon cousin, was chosen as “King of the French” and reigned as King Louis Philippe.

Charles settled in Prague. He then moved to what is now Slovenia. Charles X of France died of cholera on November 6, 1836, at the age of 79. His tomb is in the Bourbon crypt of the Church of the Annunciation of Mary, in the Kostanjevica (Castagnevizza) Monastery in Nova Gorica, Slovenia.

What did the Duke of Wellington think of Louis XVIII? (and Charles X of France)

The Palace of Saint-Cloud

18 commments on “The Count of Artois: Charles X of France”

The sworn enemy of liberal ideas, devout and ambitious, this prince burns with desire to become king, but king the way his forefathers were, that is to say, without a constitutional charter.