The Duke and Duchess of Angoulême were married royal cousins (the son of Charles X and the daughter of Louis XVI of France) who led lives of disappointment, exile and sorrow. 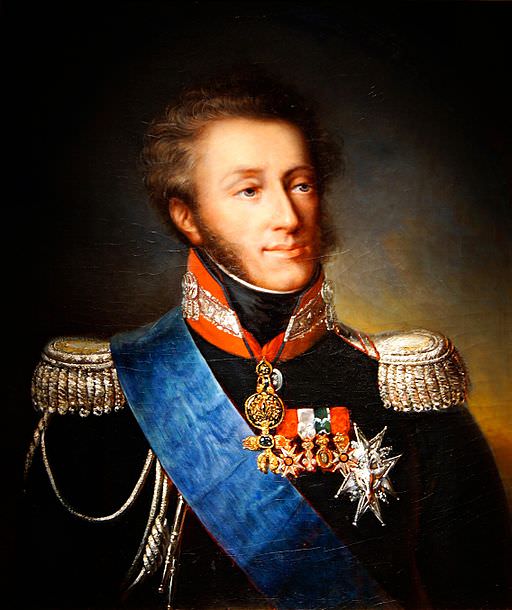 Louis Antoine, Duke of Angoulême, was born on August 6, 1775, the son of the Count of Artois and Marie Thérèse of Savoy. He is less well known than his cousin and wife, Marie-Thérèse, Duchess of Angoulême, who was born at Versailles on December 19, 1778. She was the eldest child of Louis XVI and Marie Antoinette, and the only one of their offspring to survive the French Revolution. 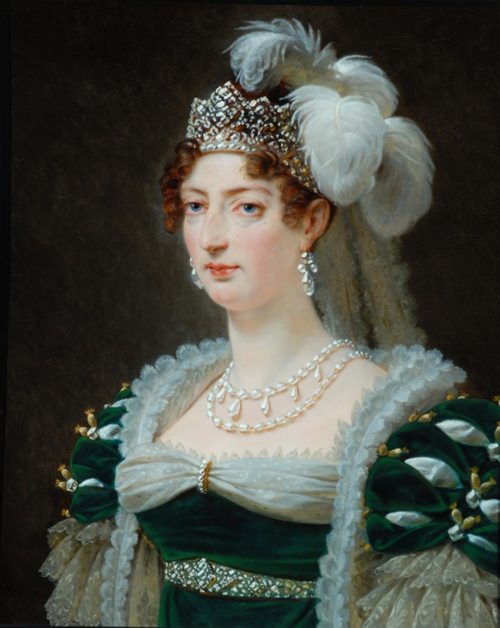 Marie-Thérèse (or Madame Royale, as she was then known) was imprisoned in the Temple, the remains of a medieval fortress in Paris, from August 13, 1792 to December 18, 1795, the eve of her seventeenth birthday. During this time her parents were guillotined and her younger brother – imprisoned in a separate room and neglected – died of illness. 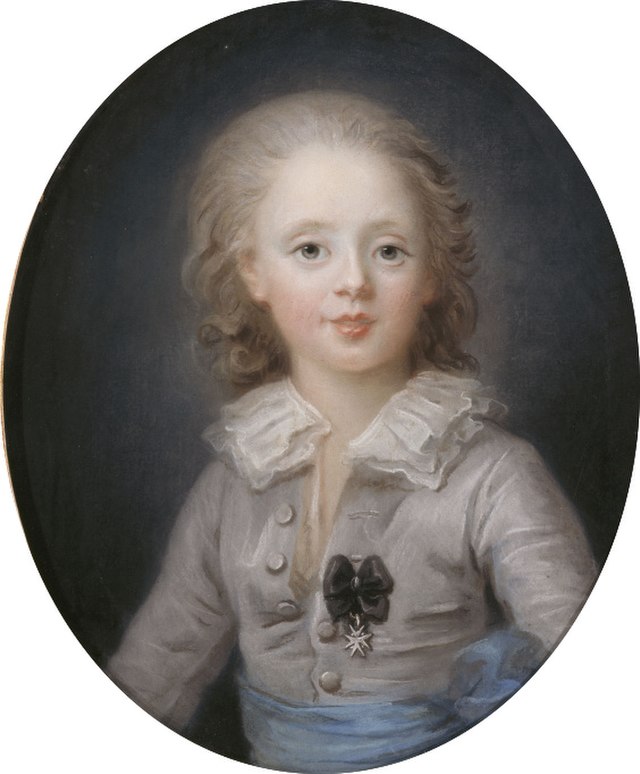 On her release from prison, Marie-Thérèse was taken to Vienna (her mother was a member of the Austrian royal family). She then joined her uncle Louis XVIII in exile in Mitau, in present-day Latvia, where he was living as a guest of the Russian Tsar. Louis XVIII wanted Marie-Thérèse to marry the Duke of Angoulême. She readily agreed, as it was a project her parents had favoured, though she could not remember ever having seen her cousin. They were married on June 10, 1799 at Jelgava Palace. 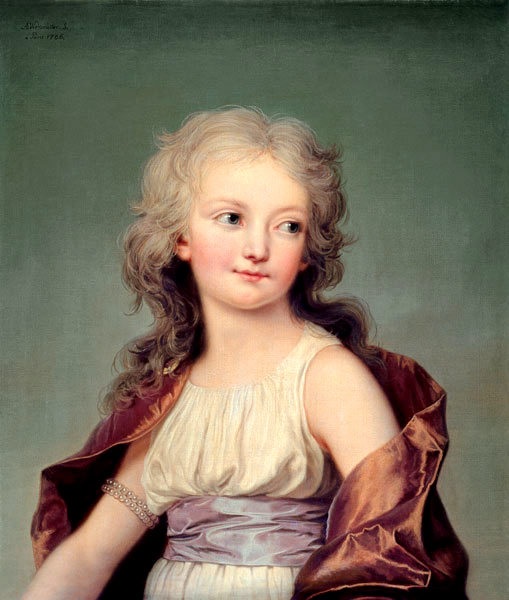 In Napoleon in America, King Louis XVIII at one point looks to his nephew, the Duke of Angoulême, for support, but is disappointed in the result. That about sums up the poor Duke’s life. He was probably a disappointing husband. He lacked his father’s charm and manners, and had a sickly appearance. Even a partisan of the royal family said,

He is small, ugly and awkwardly built. He has very little brains and speaks in an uneducated manner. (1)

The Duke of Angoulême was widely thought to be impotent or homosexual. There’s a good chance the marriage was never consummated. There were rumours, probably unfounded, that he ill-treated the Duchess. In public they were courteous to each other. Marshal Macdonald wrote:

[T]hose…who had opportunity for observation, noticed that the young couple were very affectionate and treated each other with the greatest deference and regard. (2)

In any case, the Duchess of Angoulême was already sorrowful. She said it would have been better to share in her family’s deaths than to live “condemned to cry.” (3) In fact she maintained a strict reserve and didn’t cry often. Louis XVIII, in a letter to the Count of Artois after their niece’s arrival at Mitau, wrote:

When she speaks of her misfortunes, tears do not come easily, from habit, as she contained herself to not give her jailers the barbaric pleasure of seeing her cry. (4)

The Duke and Duchess of Angoulême moved with Louis XVIII and the Count of Artois to Britain, until the royal family’s return to France in 1814. The Duke of Angoulême had entered service with the émigré army in 1792. He led an unsuccessful royalist uprising in the Vendée and commanded a regiment of Bavarian cavalry in the battle of Hohenlinden in 1800. He sailed to Bordeaux in March 1814; the city had declared for the King even before Napoleon’s abdication.

The only man of her family

When Napoleon escaped from Elba and returned to France in March 1815, the Duke of Angoulême led the French army in the southern Rhône valley. When the Duke of Angoulême surrendered to General Grouchy, Napoleon spared the Duke’s life by allowing him to be conducted to Spain. Meanwhile the Duchess of Angoulême was trying to rally the troops in Bordeaux. They agreed to defend her, but would not oppose Napoleon’s men. She finally agreed to leave on an English ship once she realized her cause was lost. Napoleon, when told of her courage, said, “She is the only man of her family.” (5) The Duchess of Angoulême called Napoleon “the usurper” and “the criminal.” 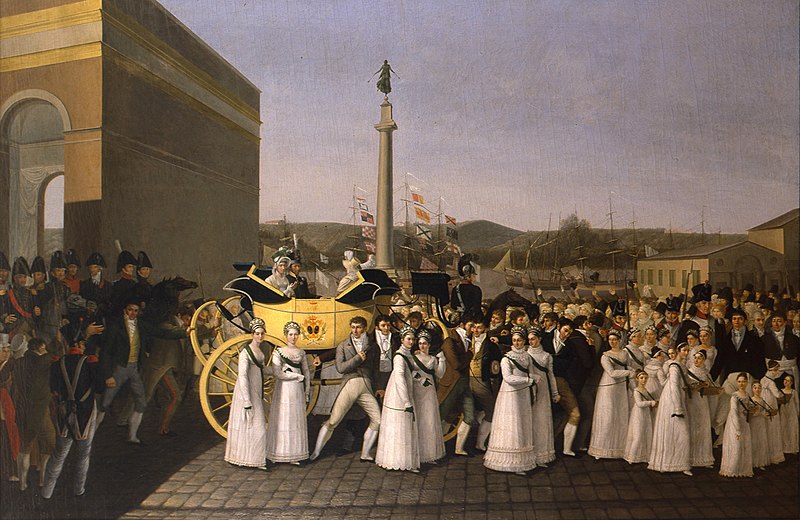 Arrival of the Duke and Duchess of Angoulême in Bordeaux, 1815, by Boccia

The Duke and Duchess of Angoulême returned to France after Napoleon’s defeat at Waterloo. The Duchess was tenderly attached to Louis XVIII, though she frequently disagreed with him. The Duke was more in sympathy with the king. To his family’s great pride, in 1823 Angoulême led a French invasion of Spain to restore a Bourbon cousin, Ferdinand VII, to the Spanish throne. (That part of Napoleon in America is not fiction – read about the invasion here.) 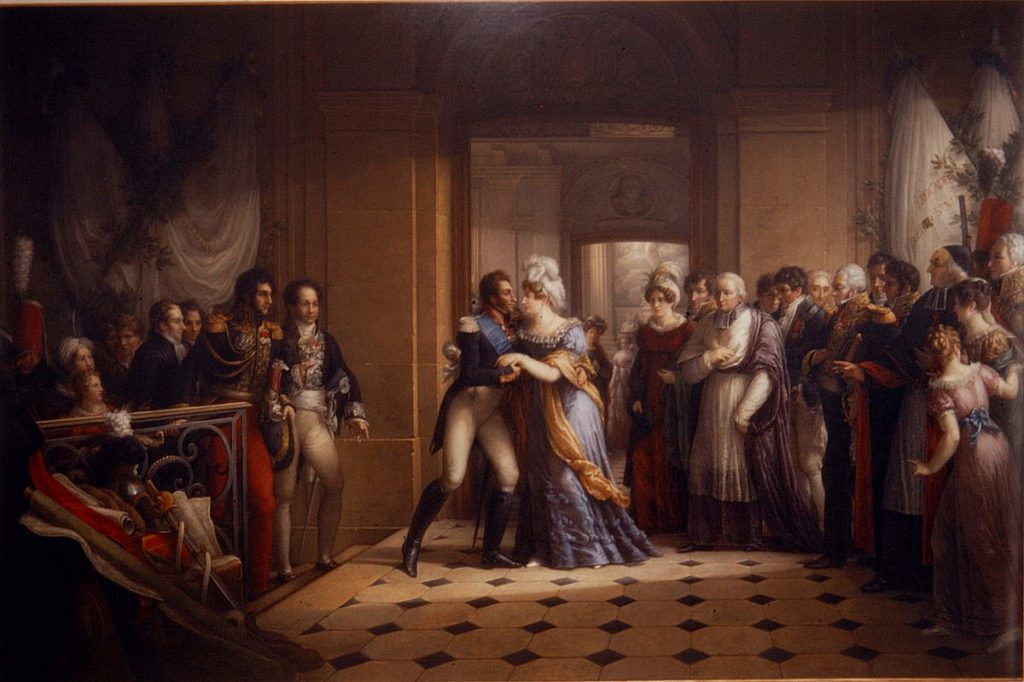 Reunion of the Duke and Duchess of Angoulême after his return from Spain in 1823, by Étienne Barthélémy Garnier

In 1824, Louis XVIII died and the Count of Artois became King Charles X of France. The Duke of Angoulême became heir to the French throne (the Dauphin) and his wife became the Dauphine – the last one France ever had.

Neither had deep intellectual resources. The Duchess did not care for clever people, the Duke was extremely shy, and both were extremely pious. The Duchess developed a reputation for haughtiness. Chateaubriand wrote of her refusal to speak to him:

Silence from the orphan of the Temple can never be deemed ingratitude. Heaven has a right to the earth’s worship and owes nothing to anyone. (6)

The Duchess of Angoulême liked simplicity in her rooms and her dress. She banished from court the luxurious clothing of the Napoleonic period, preferring her ladies to wear simple white dresses. She did her own dressing and toilette, as she had done in prison.

When Charles X lost his throne in the July Revolution of 1830, he abdicated in favour of the Duke of Angoulême. The Duke reigned for 20 minutes as King Louis XIX of France before abdicating in favour of his nephew Henri, the Duke of Bordeaux. Unfortunately for the Bourbons, the Chamber of Deputies pronounced the Duke of Orléans (Louis Philippe) their new king. Yet again the royal family went into exile. They lived first in Edinburgh, and then at Prague Castle, where they maintained the etiquette of the Paris court on a greatly reduced scale.

When Chateaubriand saw the Duke of Angoulême in 1833, he wrote:

I found him looking older and thinner. He was dressed in a shabby blue coat, buttoned high to the throat; it was too big for him and looked as if it had been bought at a second-hand shop; I felt terribly sorry for the poor Prince.

The Duke seemed ashamed of his lack of action during the July Revolution. He reportedly said, “There is no mouse-hole small enough to hide me,” and “[l]et no one speak of me; let no one be concerned about me; I am nothing; I wish to be nothing.” (7)

Chateaubriand continued to Carlsbad, where the Duchess of Angoulême was taking the waters. This time she was happy to speak with him. Of his meal with her, he wrote:

The dinner was so meagre and ill-cooked that I rose from the table dying of hunger. It was served in her own salon, for she had no dining-room.

After dinner, she sat looking out the window, commenting on the passers-by.

It interested me to see Marie-Thérèse, the Princess of thrones and scaffolds, come down from her lofty position to gossip like other women about the habits of the neighbours; I observed her with a kind of philosophic tenderness. (8)

Leniency towards each other’s failings

The Duke and Duchess of Angoulême both remained greatly attached to Charles X and nursed him through his final illness and death. They lived an austere and monotonous life as trusted friends who shared each other’s sadness. They detached themselves from any political activity and turned increasingly to mysticism. The Marquis de Villeneuve observed:

[T]he couple had become august not only by sorrow nobly borne, but also by the strength of the bond between them, which included absolute leniency towards each other’s failings. (9)

The Duke of Angoulême died of sepsis on June 3, 1844 at the age of 68. After his death, the Duchess settled outside Vienna at Schloss Frohsdorf, where Napoleon’s sister, Caroline Murat, had earlier lived in exile. She spent her days walking, reading, sewing and praying. Her niece and nephew, Louise and Henri, on whom she doted, joined her there. She died of pneumonia on October 19, 1851 and was buried next to her husband in the Bourbon crypt at the Kostanjevica Monastery in Slovenia. Two months later, Napoleon’s nephew, Louis-Napoléon Bonaparte, staged a coup d’état in France. He went on to rule as Napoleon III.

Just as theories swirl about Napoleon’s possible substitution and escape from St. Helena, there is a theory that the Duchess of Angoulême was secretly substituted for someone else on her trip from Paris to Vienna in 1795, laid out here.  The Madame Royale Historical Society is trying to determine the truth of this theory through DNA testing of the remains of the “Dark Countess” (the alleged real Marie-Thérèse).

You can read the Duchess of Angoulême’s memoirs of what passed in the Temple here.

11 commments on “The Duke and Duchess of Angoulême”

[T]he couple had become august not only by sorrow nobly borne, but also by the strength of the bond between them, which included absolute leniency towards each other’s failings.