Old Bumblehead the 18th trying on the Napoleon Boots, or Preparing for the Spanish Campaign, caricature by George Cruikshank, 1823. That’s Napoleon’s son, the Duke of Reichstadt, standing behind Louis XVIII, ready to catch the crown.

Napoleon in America takes place, in part, against the backdrop of a French invasion of Spain. This invasion was not invented for the novel. It actually happened, in 1823, to restore a Spanish Bourbon king to the throne. It was a huge deal at the time, both in Europe and the Americas. Newspapers, diplomatic reports, memoirs and letters of the period are full of commentary on the events leading up to the invasion, the resulting war, and its aftermath. Here is a very abbreviated account of what transpired.

In January 1820, a liberal revolt led by Spanish troops under General Rafael del Riego compelled absolutist King Ferdinand VII to implement the Spanish constitution of 1812. That constitution – full of goodies like universal suffrage (at least for men) and freedom of the press – had been drafted by the Spanish national assembly (the Cortes) when they were trying to rid the country of King Joseph Bonaparte and Napoleon’s troops during the Peninsular War. Upon the constitution’s resurrection, Ferdinand became a de facto prisoner of the Cortes. He retired to Aranjuez, south of Madrid. When a counter-revolt by extreme royalists in July 1822 failed to liberate him, Ferdinand called on the other European monarchs to come to his assistance.

The issue was taken up at the Congress of Verona in late 1822. The Holy Alliance (Russia, Prussia and Austria) was concerned about the threat posed by revolutionary movements such as that in Spain, and Russian Tsar Alexander I was keen to intervene. The British – represented at the Congress by the Duke of Wellington – were opposed to intervention. Austrian Foreign Minister Clemens von Metternich was in favour of restoring legitimate monarchs, but did not want to give Russia an excuse to extend its power.

France was in an awkward position. As Ferdinand VII was a member of the House of Bourbon, French ultra-royalists were pressuring King Louis XVIII to rescue his distant cousin. Louis, however, disapproved of Ferdinand’s brand of absolutism, and neither he nor Prime Minister Joseph Villèle favoured sending troops into Spain. War would be expensive, the army was not well organized, and the loyalty of the troops was questionable. As a compromise, the government had already deployed soldiers along the border with Spain, ostensibly to prevent the spread of yellow fever into France. This “cordon sanitaire” became an observation corps.

France’s representative at the Congress of Verona, Foreign Minister Mathieu de Montmorency, was on the side of the ultra-royalists. He ignored Villèle’s instructions to limit discussion of the Spanish question. Arguing that turmoil in Spain posed a threat to all of Europe, and especially to France, Montmorency told the Congress that circumstances might force France to recall her ambassador from Madrid, leading the Spanish Cortes to declare war on France. He then asked whether, if France were compelled to engage in a defensive war with Spain, she could count on the support of her allies. Russia, Austria and Prussia agreed to provide moral and possibly material support. Britain would not provide support. Instead, she offered to mediate between France and Spain. The offer was refused. Amidst much hand-wringing over the assault on Spanish liberty, Britain ultimately adopted a position of neutrality.

Though the way was paved for unilateral French intervention in Spain, Villèle – backed by Louis XVIII – refused to go along with the plan. Montmorency resigned. His replacement, François-René de Chateaubriand, also favoured intervention, arguing that it would give France an opportunity to regain great power status. There were fierce debates in the Chamber of Deputies. Ultra-royalist pressure forced Villèle and the king to give in. On January 28, 1823, Louis XVIII told the Chambers:

I have done every thing to ensure the security of my subjects, and to preserve Spain from the extreme of misfortune. The blindness with which the propositions, sent to Madrid, have been rejected, leaves little hope of peace.

I have ordered the recall of my minister, and one hundred thousand Frenchmen, commanded by a prince of my family, are about to march and invoke the God of Saint Louis to preserve the throne of Spain for a descendant of Henri IV, to save that fine kingdom from ruin, and to reconcile her to Europe. (1)

The Sons of Saint Louis

The 100,000 sons of Saint Louis – otherwise known as the Army of the Pyrenees, mobilized for the invasion – actually numbered around 60,000. The problem of ensuring soldiers’ loyalty without compromising their efficiency was dealt with by giving primary commands to former Napoleonic generals (who had the necessary experience) and secondary commands to royalists (who were unlikely to mutiny). Louis XVIII’s nephew, the Duke of Angoulême was made commander-in-chief, despite his lack of military experience. He was not keen on the appointment, but agreed to it as an honourary post, leaving the army’s actual military direction to General Armand Guilleminot, who had served under Napoleon.

The government hoped that victory over the revolutionary forces in Spain would break the spirit of those who were conspiring against the Bourbons in France. Many French political refugees, including some who had fled to the United States and participated in the Vine and Olive Colony or the Champ d’Asile, fought on the side of the Spanish constitutionalists. Among them was the indomitable Charles Lallemand, who organized a Legion of French Refugees in Spain.

At the beginning of February 1823, police spies reported they had heard that:

Before the end of the month, Spain will have organized an army of one hundred and eighty thousand men to oppose the French invasion; this army will have for its vanguard a French legion, which will march under tri-coloured flags; this legion will nominate a French regency with Prince Eugène Beauharnais at its head….

The French army will be the scorn of all Europe; it can hope for no success when commanded by a prince…who has no claim on the confidence of true Frenchmen….

The first shot fired at the Pyrenees shall be the signal for the downfall of the Bourbons in France, Spain and Naples. Such are the hopes and prayers of the liberals in all countries. (2)

On April 6, 1823, the question of the army’s allegiance was answered. Just as happens in Napoleon in America, a group of insurgents led by Colonel Charles Fabvier tried to subvert the French forces at the Bidassoa River who were preparing to enter Spain. Fabvier’s group hoisted the tricolour flag, sang “La Marseillaise” and urged the soldiers to desert the Bourbons. Instead the French troops obeyed General Louis Vallin’s orders to open fire on Fabvier and his men. 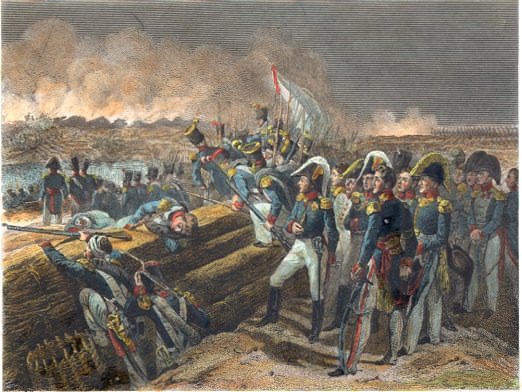 The French siege in the Battle of Trocadero, August 31, 1823

The next day, the French army entered Spain. They met little resistance. As an Irish visitor to the country reported:

The Constitution, no matter what may be its excellence or imperfection, has certainly not succeeded in gathering around it the sentiments and good wishes of a majority of the people of that country. … [A]pathy, to use the mildest expression, prevailed in all the towns through which we passed after leaving Madrid. From my own observations, and those of others, I can safely state that the great majority of the people on the line of that route desired nothing so much as peace. They have been vexed and injured by repeated contributions and conscriptions, and latterly, by anticipations of the current year’s taxes, their means of complying with them being extremely limited. … However ardent may be an Englishman’s wish that Spain may enjoy liberal institutions (and if he were without a wish of this nature he would be undeserving of his country); still, when he saw that the idea of civil liberty was carried in that nation to an extreme which promised no durability, and that this extreme, supported only by bayonets and by official employes, was the inviolable system which England was called upon to assist with her mighty arm, he cannot but rejoice that that assistance was refused, and that the strength of his country was reserved for more worthy purposes. …

In the villages where I had occasion to stop, I encountered no person who did not, at least, say that he was glad that the French had entered Spain. The poor people I heard it more than once observed, never liked the Constitution, because they never gained any thing by it. Since it was established, they had known no peace, and they liked the French, because they paid them well for every thing they consumed. It was also observed, that since the establishment of the Constitution, this part of the country was overrun with robbers; but that all that was now over, as the robbers had disappeared since the French came. (3)

The French soon controlled Navarre, the Asturias and Galicia. Andalusia, the site of Cádiz (the constitutionalists’ provisional capital, to which they had carried Ferdinand), took longer to subdue. On August 31, in the only significant battle of the campaign, the French took the fortress of Trocadero and turned its powerful guns toward Cádiz. The city surrendered on September 30. The Cortes dissolved itself and released Ferdinand VII, who rejected the 1812 constitution, restored absolute monarchy and took revenge on his opponents. In November, the Duke of Angoulême returned to France, leaving behind an occupying force of 45,000. The last French soldiers were not withdrawn until 1828.

The expedition was considered a great triumph for the Restoration. Chateaubriand wrote:

When I entered upon the foreign department, legitimacy was about, for the first time, to launch its thunders under the drapeau blanc, to strike its first coup de canon after those coups de l’empire, which will resound to the latest posterity. If she recoiled, she was lost: if crowned with mediocre success, she became ridiculous. But at one step to stride over the Spains – to succeed where Bonaparte had been baffled – to triumph upon that very soil whereon his armies had met with reverse – to do in six months what he could not do in seven years – here is a true prodigy! (4)

Villèle exploited the rush of grateful patriotism by appointing a new batch of ultra-royalist peers and calling a general election for early 1824. The left and centre were decimated, giving the ultra-royalists a clear majority.

General Louis Vallin, A Man for All Masters

I have ordered the recall of my minister, and one hundred thousand Frenchmen, commanded by a prince of my family, are about to march and invoke the God of Saint Louis to preserve the throne of Spain for a descendant of Henri IV, to save that fine kingdom from ruin, and to reconcile her to Europe.