José Francisco Ruiz was a Mexican soldier who fought for Mexico’s independence from Spain and later supported Texas’s struggle for independence from Mexico. He is most noted for being one of only two native-born Texans to sign the 1836 Texas Declaration of Independence, even though he was “horrified” by the idea. Ruiz spent considerable time among the Texas Indians, most notably the Comanches. He was well thought of by the Indians and was influential in brokering peace agreements with several Texas tribes. Ruiz thus appears as the Mexican Indian administrator in Napoleon in America.

José Francisco Ruiz was born around January 28, 1783, in San Antonio de Béxar (now San Antonio, Texas), which was then part of Spanish-ruled Mexico. He was the son of Juan Manuel Ruiz and María Manuela de la Peña. At some point Ruiz left San Antonio to receive an education at a college in Spain. When he returned in 1803, he was appointed the first schoolmaster of San Antonio. On March 8, 1804, he married Maria Joséfa Hernandez, with whom he had three children. Ruiz tended his father’s ranch and served in various official capacities in San Antonio, including regidor (town councilman) in 1805 and procurador (town attorney) in 1809.

In 1811, José Francisco Ruiz joined the Béxar Provincial Militia with the rank of lieutenant. The Mexican revolution had begun the year before. In 1813, Ruiz became one of the insurgents seeking independence from Spain. He fought in the Battle of Medina on August 18, 1813, in which Spanish troops defeated rebel forces.

With a price on his head, Ruiz fled to the United States with some family members. Ruiz’s nephew, José Antonio Navarro, later wrote:

[E]ver since the Year of 1813, and particularly since the unfortunate Battle of the Medina, my [Un]cle Francisco Ruiz, my Brother-in-Law [Juan Martín de] Veramendi, my aforesaid Brother Angel, and even ourselves the minors of the family have fallen into a horrid persecution on the part of all the Spanish officers devoted to the cause of their King. The names of Ruiz, Veramendi and Navarro was the mark of ignominy, the alarm of treason, and of all evil that could be invoked against the holy cause and the rights of the King of Spain….

[M]y Uncle Ruiz, my brother-in-law…and myself may be said wandering, in the State of Louisiana; behold here a family scattered and persecute[d by?] so many disasters. (1) 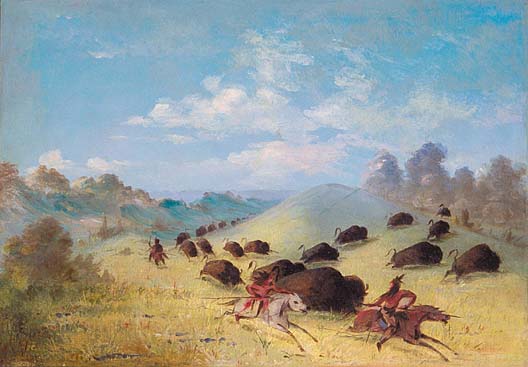 Comanche Indians by George Catlin. José Francisco Ruiz was instrumental in helping the Mexican government make peace with the Comanches and other tribes in the 1820s.

In the spring of 1821, José Francisco Ruiz was offered a pardon by the Spanish government in Mexico City, on the condition that he help make peace with the Comanche Indians. Ruiz had spent time among the Comanches and was thought to have considerable influence with them. When Mexico gained its independence later that year, the new government took up the initiative. Gaspar López, Commandant General of the Eastern Interior Provinces, wrote to Texas Governor José Félix Trespalacios. He said that he had written to Ruiz and others,

who are all residing at Natchitoches [in Louisiana], not only inducing them to restore themselves to their country and families, the Independence of the Republic being now proclaimed, but also urging them to make use of their acquaintance and influence with the warlike Indians; so that after having attained the emancipation of our beloved country, we may see them laying down their arms and becoming friendly, with the understanding that the new government established on a liberal basis and principles, shall accede to their propositions, in order to put an end to the effusion of the blood of the inhabitants of these provinces. (2)

Ruiz convinced the Comanche leaders to proceed to San Antonio, where they agreed to a truce in August 1822. Ruiz then accompanied a Comanche delegation to Mexico City to sign a formal treaty. In 1824, when the Mexican government made money available for presents to be distributed under the terms of the treaty, Ruiz was appointed the distributor. He was, in effect, the Indian agent at San Antonio.

Meanwhile, Ruiz continued to manage his large ranch holdings in the area. He also received a promotion to the rank of lieutenant colonel in the Mexican army. In December 1826, he was sent to Nacogdoches to help put down the Fredonian Rebellion. As the commander in Nacogdoches, Ruiz was instrumental in making peace with the Waco and Tawakoni tribes in mid-1827.

Ruiz returned to San Antonio in 1828. He assisted the Mexican Boundary Commission, led by General Manuel de Mier y Terán, in its travels through Comanche territory. He also wrote an influential “Report on the Indian tribes of Texas in 1828.”

In 1830, Ruiz was dispatched with the Álamo de Parras company to establish a military post on the Brazos River, called Fort Tenoxtitlán. The aim was to provide a base for the settlement of Mexican colonists and to prevent illegal American immigration and smuggling. The post suffered from isolation, hostile Indians and desertions. Ruiz was also troubled by the fact that he was not allowed to let Americans – for whom he felt sympathy – settle within his jurisdiction. In a letter to Stephen Austin dated November 26, 1830, Ruiz expressed discouragement.

Friend, I am tired already with my destiny in such a short time; it seems to me that I shall last little time with it [his post at Tenoxtitlán]. I realize that my separation from a military career is in my best interest, because I am not of the sort to be commanding during calamitous times, and much less at a point so advanced and without recourse for already there is a shortage of troops and following that there will be a shortage of necessities…. And do not ignore the fact that I detest the Indians for I know what they are, and only put up with them because the circumstances demand prudence…. (3)

The following year, Ruiz wrote to Mexican Vice President Anastasio Bustamante requesting retirement or a permanent leave from the army because of failing health. In August 1832, Ruiz received orders to abandon Fort Tenoxtitlán and move his troops back to San Antonio. He officially retired from the army at the end of that year. He devoted himself to managing his substantial ranches along the San Antonio and Brazos Rivers.

When the Texas Revolution broke out in 1835, José Francisco Ruiz allied with those who were seeking independence from Mexico. He told his nephew José Antonio Navarro:

The die is cast, and something will be done in a few months towards effecting a separation of Texas from the Mexican Republic. I feel horrified at the idea of having to pronounce this anathema on our dear country. I have fought and shed my blood in my youth for Mexico and Mexican liberty; and, although advanced in years, I would offer her the aid of my arm, if I had the least glimmering of hope that this unhappy country could be capable of self-government. But I have lost all hope for her: I see her ruin and inevitable degradation. I have military honors (you know it well) and receive a pension from the Government of Mexico. I will lose it all rather than go to Mexico and unite myself to the ranks of that oppressive army. (4)

On March 2, 1836 Ruiz and Navarro signed the Texas Declaration of Independence. They were the only native-born Texans to do so. Ruiz’s son, Francisco Antonio Ruiz, then alcalde (mayor) of San Antonio, was an important eyewitness to the Battle of the Alamo.

José Francisco Ruiz represented the San Antonio district as its senator in the first Congress of the Republic of Texas (1836-37). He died of hydropsy (edema) in San Antonio on January 19, 1840, at the age of 57. He is buried in San Fernando Cemetery Number 1. His former house is on the grounds of the Witte Museum in San Antonio.

I have fought and shed my blood in my youth for Mexico and Mexican liberty; and, although advanced in years, I would offer her the aid of my arm, if I had the least glimmering of hope that this unhappy country could be capable of self-government.