Napoleon’s only legitimate child, Napoleon François Charles Joseph Bonaparte, also known as the King of Rome, Napoleon II or the Duke of Reichstadt, was born at the Tuileries Palace in Paris on March 20, 1811. You can read my post about his life here. His birth was a touch-and-go affair. The attending doctor, Antoine Dubois, feared that either Napoleon’s wife Marie Louise, or the baby, might die. Here’s how Napoleon described the King of Rome’s birth when he was in exile on St. Helena.

Napoleon on his son’s birth 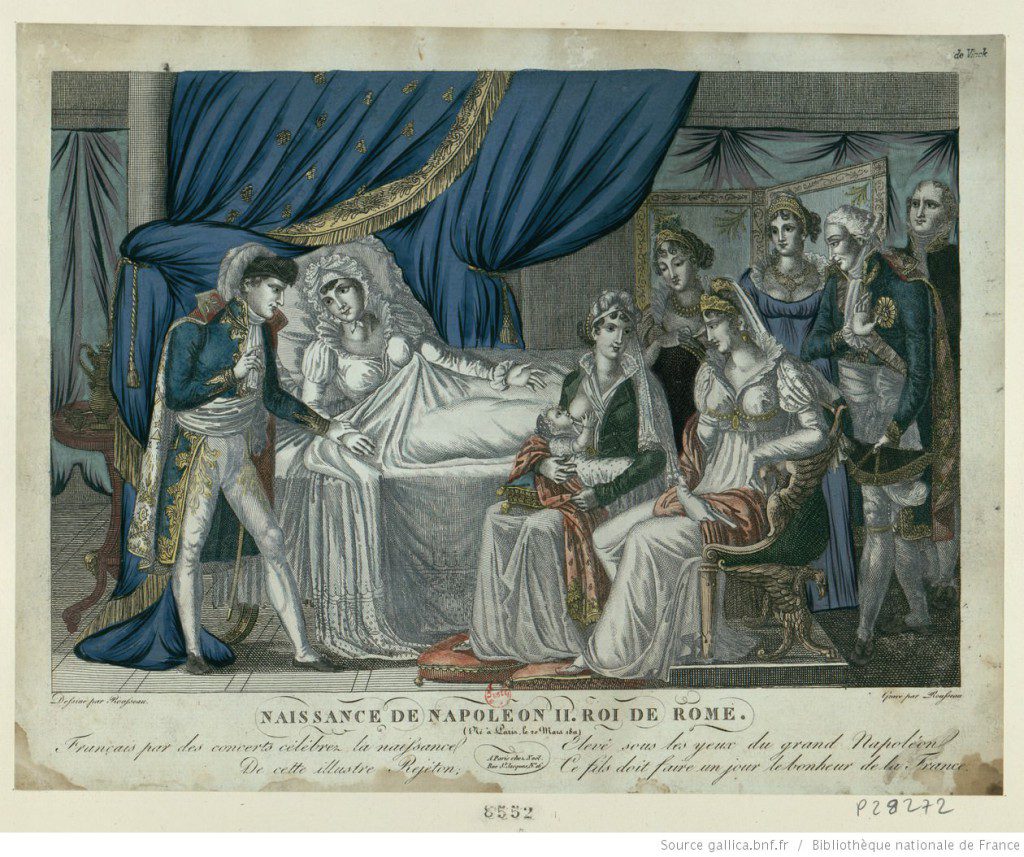 I gave Dubois a hundred thousand francs for his services as accoucheur at the birth of my son. It was on Corvisart’s recommendation that I employed him. I had better have taken the first accoucheur that came to hand. The day the child was born the Empress had walked some time with me. Her pains were coming on, but they did not think the birth would take place for four hours. I took my bath. While I was in it, Dubois rushed to me in great excitement, pale as death. I cried out, ‘Is she dead?’ – for as I have been long accustomed to hear of startling events, they do not take great effect on me when first announced to me. It is afterwards. Whatever might be told me I should feel nothing at first. An hour later I should feel the blow. Dubois assured me no – but that the child was not coming to the birth in the usual way. That was very unfortunate. It is a thing that does not happen once in two thousand cases.

I rushed at once to the Empress. She had to be moved onto another bed that they might use instruments. Madame de Montesquiou reassured the Empress, telling her that the same thing had happened twice to herself, and encouraged her to let the doctors do what they thought necessary. She screamed horribly. I am not naturally soft-hearted, yet I was much moved when I saw how she suffered. Dubois hardly knew what to do, and wanted to wait for Corvisart. The Duchesse de Montebello acted like a fool.

When the King of Rome was born it was at least a minute before he gave a cry. When I came in he was lying on a coverlet as if dead. Madame de Montebello wanted to follow out all the rules of court etiquette on the occasion. Corvisart sent her off at once. At last, after much rubbing, the child came to himself. He was only a little scratched about the head. The Empress had thought herself lost. She had persuaded herself that her life was to be sacrificed to save that of the child. But I had given orders quite to the contrary.

The chronicler of this recollection, Baron Gaspard Gourgaud, adds in a footnote:

Marie Louise, when her son was born, was convinced she was to be sacrificed to save her child. She cried: ‘I am the Empress; they do not care for me, but they want above all things to preserve the life of my son.’ The poor young girl was greatly to be pitied, separated as she was from all her family, and she thought herself lost. The emperor wanted to have the Grand Duke of Wurtzburg (a Bavarian Prince) admitted into her chamber to encourage her. She held the hands of her husband all the time. (1) 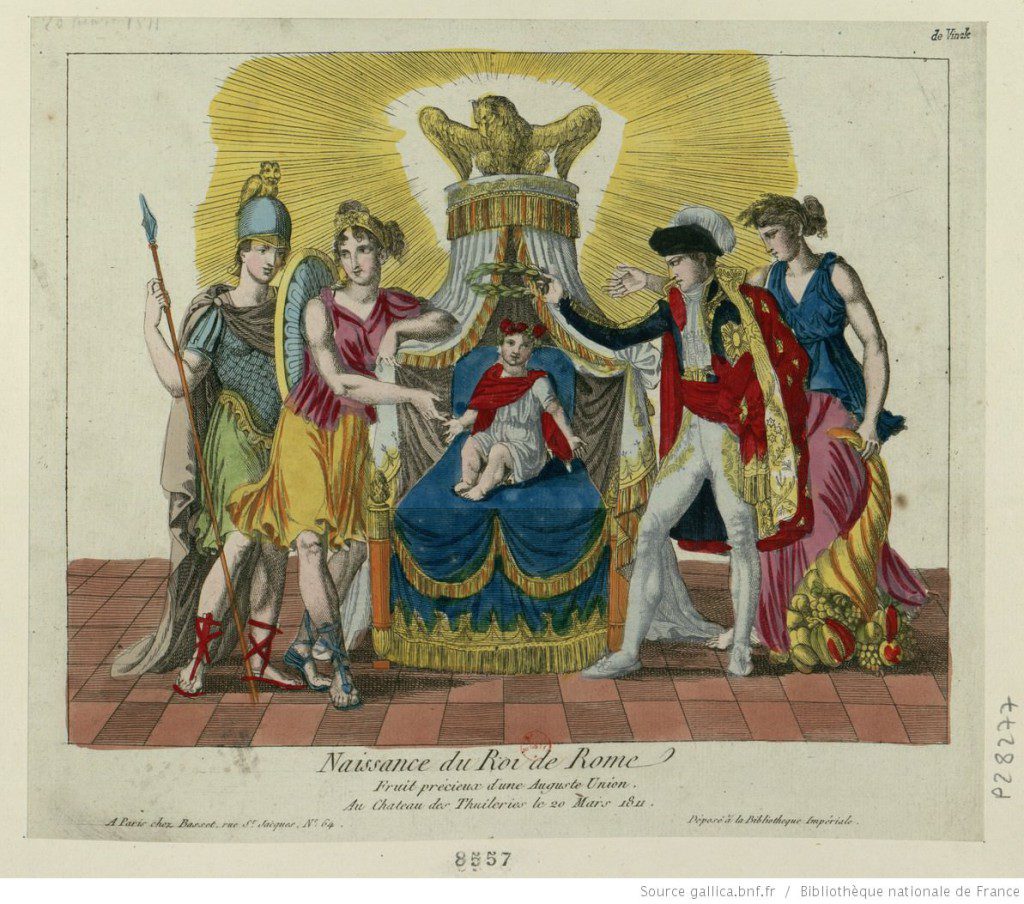 At last arrived the moment when the Empress was to be delivered, a moment waited for with such keen impatience by Napoleon, impatience shared, it may be said in all truth, by the whole of France…. The birth of a prince was to be saluted with one hundred and one cannon-shots, only twenty-one were to be fired if the child were a princess. One can hardly imagine with what anxiety the first cannon-shots were counted. Deep silence prevailed until the twenty-first. But when the twenty-second boomed forth an explosion of applause and of cheering burst out which was re-echoed simultaneously from every corner of Paris. The public enthusiasm was general, and no contemporary will deny this. The bearing of the child, however, on whom such great hopes were fixed, was to be a very laborious one.…

The first pains had been felt on the evening before – March 19th, 1811. They were endurable until daybreak, when they ceased altogether, and Marie Louise was able to get to sleep. Napoleon had spent the first part of the night by her bedside; then, seeing that she had gone to sleep, he went up to his rooms and took a bath. The members of the Imperial family, the grand dignitaries, the principal officers and ladies of the Court had been summoned to the place as soon as the first pains had been felt. But, towards five o’clock in the morning, the accoucheur, M. Dubois, being of opinion that the birth could not take place for another twenty-four hours, everybody had been sent away by the Emperor….

An hour after Napoleon had returned to his apartment, the Empress woke up in such pain that a speedy delivery was expected. Doctor Dubois, however, saw that the birth would be a very difficult one, and that this was one of the least frequent and most dangerous cases. The Emperor was in a state of perfect serenity when M. Dubois suddenly opened the door and, in a great state of dismay, announced that the first stages of the accouchement were giving him the greatest anxiety. Without waiting to listen to the explanations which the doctor began to give, Napoleon cried out, from the bottom of his heart: ‘Above all save the mother.’ Then springing from his bath he hastily wrapped himself in a dressing-gown and ran downstairs to the Empress’s room, followed by Dubois. He approached the bed and hiding his anxiety embraced her tenderly, and encouraged her with words of comfort….

[Dubois] had asked that some leading physicians should be called in for a consultation. The Emperor had refused, telling the doctor that he had chosen him because he trusted him, and that the Empress was to be treated just as if she were the wife of any ordinary man. Dubois commenced the painful operation with the skill and the sang-froid which he happily possessed. The labour did not proceed, the child presented itself legs foremost. The pains of the Empress increased in intensity. She was struck with terror, and cried out that they meant to sacrifice her. Dubois saw himself forced to use the forceps to free the child’s head.

Napoleon, a prey to silent agitation, watched this painful scene, encouraging all present by his brave attitude. At last, after many efforts, and in the midst of so much anguish, the so-impatiently-desired child came to light. It was a son, pale, motionless, and to all appearances lifeless. In spite of all the measures taken in such cases, the child remained seven minutes without giving any signs of life. The Emperor standing in front of him was following in silence and with an air of profound attention, every movement of the accoucheur, when at last he saw the child’s breast rise, the mouth open and a breath exhaled. He feared lest it might be the first and last, but a cry escaping from the child’s lungs tells him that his son has taken possession of life. All anxiety then ceases. In the effusion of his joy Napoleon bent over the child, seized it in his arms, with a spontaneous movement, carried it to the door of the drawing-room in which all the grandees of his Empire were assembled and presenting it to them said: ‘Here is the King of Rome.’ He then returned and placed the child back in M. Dubois’s hands saying: ‘I give you back your child.’ …

The Emperor, after he had recognized the congratulations of those present, insisted on going in person to announce the news of the birth of his son to the whole household. He was still under the influence of the painful sight of the Empress’s delivery, and said that he would have preferred being present at a battle. The news of this happy event had spread over Paris as by magic. When the big bell of Notre Dame, and the cannon made it public, a large crowd had already assembled in the garden under the windows of the palace. To restrain the crowd, and to prevent it from disturbing the repose of the august patient, a cord had been stretched along the whole length of this terrace…from the railing at the Pont Royal to the Pavillon de l’Horloge. This feeble barrier impressed the crowd more than a wall would have done. The spectators, whose number increased every minute, even kept themselves at a respectful distance from the cord. General silence, a proof of popular sympathy and interest, was observed. From the interior of his apartments, Napoleon contemplated with visible emotion this sight, so pleasant for him…. On the same evening the new-born child was baptized in the Tuileries chapel by the Cardinal Grand Almoner, with all the ceremonies in use at the old court of France. (2)

14 commments on “The Perilous Birth of the King of Rome”

[Napoleon] was still under the influence of the painful sight of the Empress’s delivery, and said that he would have preferred being present at a battle.