Felipe de la Garza was the most important military figure in Nuevo Santander (present-day Tamaulipas, Mexico) during the 1820s. He spent the early part of his military career in Texas. Though De la Garza remained on the royalist side during Mexico’s war for independence, he soon embraced revolutionary politics in the new nation. De la Garza led a failed revolt against Mexican Emperor Agustín de Iturbide. He later led Iturbide to his execution.

Felipe de la Garza was born in Soto la Marina in the province of Nuevo Santander in northeastern Mexico. His parents were Evaristo de la Garza and Tomasa Cisneros. The De la Garzas were descended from a Spanish captain who immigrated to New Spain in the 16th century. As wealthy hacienda owners, they were one of the most prominent families in the area.

Although several websites give Felipe de la Garza’s year of birth as 1798, he was undoubtedly born earlier. In 1810, he was given military command of the post of Santísma Trinidad de Salcedo in Texas – hardly a job for a 12-year-old. A look at the index of De la Garza’s correspondence with Texas Governor Manuel María de Salcedo reveals the range of problems he had to deal with. For example, in May 1812 De la Garza wrote on

a horse and mare found by party sent out in search of a man escaping into Louisiana; on transmittal of military reports; on the attack by Indians on mail carriers; on the construction of a fort to protect the settlers in case of Indian attack; on the arrest of Arscencio Arreoloa, Indian interpreter, for stirring discontent among the Indians; and on arrangements to escort mail carriers because of Indian hostilities. (1)

A week later he wrote about the

remittance of documents concerning an Anglo-American, a Negro and a Negro woman; on the return of horses to the Navidacho Indians; on the lack of troops, ammunition and arms, and request to send back Trinidad soldiers detached in other posts; on request for replacement for Blás José Perales who was sent to hospital in Béxar; on damages caused by a storm on military quarters and guardhouse; on the insubordination of José Ignacio Góngora; and on keeping one of the three axes sent with Góngora, for the construction of a defensive wall. (2)

As a royalist officer, De la Garza also had to contend with insurgents fighting for Mexico’s independence from Spain. He may have fought in the Battle of Medina in August 1813. A month later he was preparing for an attack on rebels at Refugio. In 1817, De la Garza was given the responsibility of defending Soto la Marina from an invasion of rebels led by Spanish adventurer Francisco Javier Mina.

By the time Mexico gained its independence in 1821, Felipe de la Garza was one of the most important men in Nuevo Santander. Thanks to his military service, his social standing and his last minute endorsement of the independence cause, he was appointed governor of the province.

In July 1822, General Agustín de Iturbide was crowned Emperor of Mexico. He faced considerable opposition, particularly from the Mexican Congress. On August 26, Iturbide responded to rumours of an anti-government conspiracy by arresting 66 people, including 19 congressional deputies. The prisoners named Felipe De la Garza as one of their co-conspirators. Iturbide sent a small detachment to Nuevo Santander to replace De la Garza and send him to Mexico City for interrogation. De la Garza made it known that he would oppose this mission by force.

On September 26, 1822, Felipe de la Garza issued a pronunciamiento. He demanded that the imprisoned deputies be released, that the congress be moved to a safe location, and that Iturbide honour his promises to respect the constitution, among other things. De la Garza did not declare himself a republican. Instead he claimed his revolt was designed to defend constitutional monarchy. Finding no support outside his own province, De la Garza soon negotiated his surrender. This disappointed his officers and soldiers, who had been prepared to defend their position with force. De la Garza was marched to Mexico City, where Iturbide pardoned him and restored him to his post in Nuevo Santander.

In March 1823, Iturbide was forced to abdicate and was exiled from Mexico. On April 5, 1823, Brigadier Felipe de la Garza was appointed Commander General of the Eastern Interior Provinces (Nuevo Santander, Nuevo León, Coahuila and Texas). Thus he is the Mexican military commander who has to deal with Napoleon’s arrival in Texas in Napoleon in America.

De la Garza’s reputation had been severely damaged by his revolt. He could no longer count on the support of Nuevo Santander’s militias. Rival political families took advantage of his damaged credibility. When Nuevo Santander (renamed Tamaulipas) unilaterally declared itself a state in June 1823, De la Garza was sidelined. He resigned as commander general of the eastern provinces in December. He kept his position as commander general of Tamaulipas.

On July 14, 1824, Iturbide – who had moved to England – returned to Mexico with his wife and two of their children. Shortly after landing at Soto la Marina, the ex-Emperor was arrested by De la Garza. The latter informed Iturbide of a decree passed by Congress a few months earlier that declared him “outside the law” and thus liable to be killed if he set foot in Mexico. Iturbide was horrified and asked to have his chaplain sent from his ship.

“Considering the defenceless and submissive manner in which [Iturbide] presented himself to me,” De la Garza was reluctant to apply the decree himself. (3) He instead decided to march his prisoner to Padilla to consult the state legislature. In so doing, De la Garza delegated command of the military escort to the former Emperor. Thus Iturbide approached Padilla on the morning of July 19 at the head of a considerable number of soldiers. Explaining that there was no way Iturbide could have known about his proscription before leaving England, De la Garza pleaded with the panicked legislators to spare the prisoner’s life and instead allow him to leave Mexico with his family. The legislature, however, sentenced Iturbide to death. He was executed by a firing squad at 6 p.m. that day. 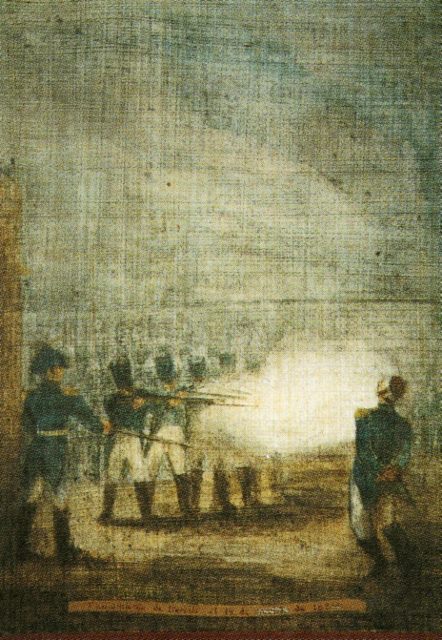 The execution of Agustín de Iturbide at Padilla, after his arrest by Felipe de la Garza

De la Garza later explained that he had handed over command of his soldiers because he wanted to make Iturbide feel comfortable enough to share information about his intentions. He was reportedly convinced that Iturbide had returned to help prevent Mexico from being reconquered by Spain. Colonel Charles de Beneski, who accompanied Iturbide from England, claimed that De la Garza was enthusiastic about Iturbide’s return.

[Felipe de la Garza] indignantly launched forth, in censuring the errors of government; bitterly condemned the faults and immorality of the General Congress; and portrayed in strong and angry terms the universal disgust and discord that reigned among the States…. [H]e dwelt upon the respect and friendship he entertained for Iturbide; and how anxiously he longed once more to behold him at the head of a people who sighed for his recall; adding, that such was the universal wish, even of those who had been adverse to his administration. He assured me, also, that he himself would have written to Iturbide had not the great risk of discovery deterred him; and he had deferred so doing till the present moment, solely, on that account. All this was spoken with an air and tone of the utmost sincerity and candour. He ended by observing: ‘when Iturbide established the independence of his country I was one of his most devoted friends; but from the hour that he accepted the crown, and caused several of the provincial deputies to be arrested, I abhorred him…. I was one of the first to take up arms against him: but from that moment when he granted me my life, having it in his power to have sacrificed me, I vowed him eternal gratitude.…

[M]ost assuredly, he may depend upon me…. [T]he high reputation I enjoy in this province, would in the space of fifteen days place me at the head of two thousand cavalry, and ten pieces of ordinance, all amply provided with munitions of war, and every reliance might be reposed in the troops.’ (4)

De la Garza was removed from military command of Tamaulipas. In 1827-28, he served as the federal deputy for the state. In 1829 he was again temporarily given the post of Commander General of the Eastern Interior Provinces. He helped defend Tampico against a Spanish invasion. In 1830 he was elected as a Mexican senator.

Felipe de la Garza died on March 29, 1832 of tuberculosis. He left an estimated 150,000 pesos in land, livestock and letters of credit to his widow, María Antonia de la Serna. Antonia, known as “la Generala,” was De la Garza’s second wife, married in 1823. His first was María Inés Arizpe, who died in 1812. Antonia remarried after De la Garza’s death and lived to the age of 90.

[De la Garza] dwelt upon the respect and friendship he entertained for Iturbide; and how anxiously he longed once more to behold him at the head of a people who sighed for his recall.