Would you rather eat sweetbreads or sweetmeats? While sweetbreads might sound like sugary buns, they are actually a form of meat. They consist of the pancreas (“heart,” “chest” or “stomach” sweetbreads) or thymus glands (“throat” or “neck” sweetbreads) of an animal, usually a calf or a lamb. Dorothea Lieven offers George Canning some larded sweetbreads at her dinner party in Napoleon in America. 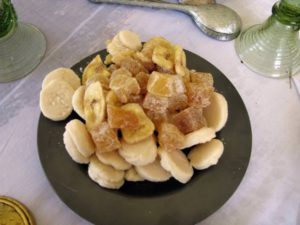 A plate of sweetmeats

The first known use of the word “sweetbreads” occurred in the 16th century. These bits of offal may have been called “sweet” because they were considered a delicacy, or because they tasted richer than the more savory muscle meat. The “bread” part of the name may have come from an Old English word for flesh or for roasted meat.

To further confuse things, actual sweets – candies, cakes, pastries, preserves – used to be called sweetmeats. This term, also from an Old English word, was first used in the 15th century and was still common in the 1800s. Some popular 19th-century British sweetmeats took their names from prominent figures of the Napoleonic Wars.

As mentioned in my article about Boney the bogeyman, “Bonaparte’s ribs” was a lollipop named after Napoleon. An 1845 guidebook to London observed:

[T]he little sweet-stuff shops in the little lanes and alleys abound in great profusion. Here, under the tantalizing denominations of hard-bake, almond-rock, brandy-balls, bulls’-eyes, elicampayne, sugar-plums, candied almonds, acid drops, Bonaparte’s ribs, peppermint, are saccharine juices in great variety and profusion; in the City, however, where children are taught to stuff as soon as they can crawl, these sweet-stuff shops rise to wholesale dignity, and supply not only little children, but the ‘trade.’ (1)

On a tour of a sweet shop in 1847, a writer for the London magazine Punch learned how this sweetmeat supposedly got its name.

We were next taken over the Bonaparte’s Ribs department, and received the instructive information that this sweetmeat dates as far back as the divorce of the Emperor from Josephine and his marriage with Marie-Louise, which suggested the idea of Bonaparte’s Ribs, and as the repudiation of his first partner was generally regarded as the commencement of his downfall, this popular lollipop was struck in commemoration of an event that promised so much for English interests. Bonaparte himself being in everybody’s mouth at that time, it was very naturally supposed that his ribs might get into the same position, and thus a large sale would be ensured for the new sweetmeat. The original inventor was not mistaken, for he retired on the ribs in less than three years from the time of their being first manufactured. (2)

Another magazine described how one proprietor of sweetmeats took advantage of the library on her premises to save on expenses associated with the sale of Bonaparte’s ribs.

Mrs. Boxer’s notions of the belles lettres are somewhat vague and restricted. She sells toffee, Bonaparte’s ribs, and other articles of rough confectionery, penn’orths [pennyworths] of which are occasionally seen to emerge from her miscellaneous stores wrapped in printed leaves of suspicious size, and still more suspicious literary significance. In short, I have a notion that Mrs. Boxer pulls out a stray leaf here and there to save the expense of paper in which to screw up toffee or Bonaparte’s ribs. (3)

In an 1851 description of the “Street Sale of Sweet-Stuff,” there is a tantalizing reference to a sweetmeat named after the Duke of Wellington.

Treacle and sugar are the ground-work of the manufacture of all kinds of sweet-stuff…. The flavoring – or ‘scent’ as I heard it called in the trade – now most in demand is peppermint. Gibraltar rock and Wellington pillars used to be flavored with ginger, but these ‘sweeties’ are exploded [i.e. fallen from favour]. (4)

Admiral Nelson got his sugary tribute as well.

The old man…who supplied us with gingerbread and sugarplums, had availed himself of the advantage that the knowledge of the sweet, which was the favourite of his Lordship in his juvenile days, conferred upon him; for when the hero’s name had become enrolled in the annals of Fame, the circumstance of his former partiality returned so vividly to the cake-vender’s imagination, that he bent his whole attention to recollect the ingredients of which this sweet was composed, and so true to him was his memory, that the result of his lucubrations ended in the reproduction of the very same article, which henceforth appeared under the appellation of ‘Nelson’s balls;’ and as he took occasion, whenever he deemed it a matter of expediency, not only to dwell on the high merits of this deft mixture of sugar, treacle, et alia ejusdem generis, but also to expatiate largely on the reasons which, from personal knowledge, had induced him to assign such an appellation to this portion of his stock in trade, the sale of it was attended with no inconsiderable benefit to his purse. (5)

I’ve travell’d up and down,
All the country over,
Seen every market town,
All the way to Dover,
What here I’ve got to sell,
Don’t be shy to ask it,
Or you I soon shall tell
To look into my Basket.

Now therein you will find,
What will please your fancy;
Mint drops to break the wind,
Or it will a chance be;
Here’s barley sugar sweet,
Gibby sticks and kisses,
If you will to please to treat,
Little boys or misses.

If the above has whet your appetite for a Napoleonic War-themed sweetmeat, try this recipe for Nelson’s balls from an 1866 cookbook. It’s not clear how much this biscuit/cookie resembles the treacly confection mentioned above.

Take three pounds of flour, half a pound of sifted sugar, the same of butter, and a little essence of lemon; mix this up very stiff with milk, put it in a cloth for half an hour, then break it smooth with a biscuit break or rolling pin; mould them into small balls about the size of a walnut with your fingers, bake in a rather quick oven, and put into the screen to dry. (7)

The Restaurateur: Dining in Paris in the Early 19th Century

Bonaparte himself being in everybody’s mouth at that time, it was very naturally supposed that his ribs might get into the same position, and thus a large sale would be ensured for the new sweetmeat.