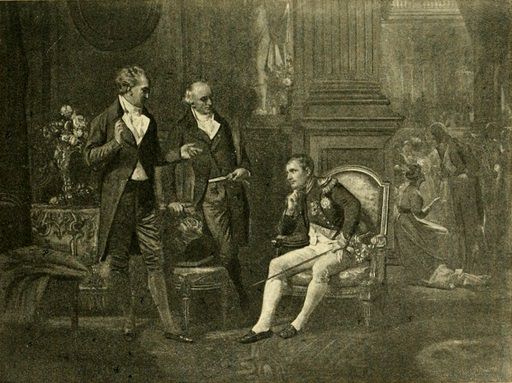 Napoleon meeting with Goethe and Wieland. Photogravure from a painting by Eugène Ernest Hillemacher

In 1808, French Emperor Napoleon Bonaparte met Johann Wolfgang von Goethe, the greatest German literary figure of the modern era. Each man admired the other, although Napoleon’s motives were not solely to greet the author of one of his favourite books.

The Congress of Erfurt

Born in Frankfurt on August 28, 1749, Goethe was 20 years older than Napoleon. His fame as a writer was already well-established by the time Napoleon came to power in France. The young conqueror read Goethe’s The Sorrows of Young Werther multiple times, and carried it in his campaign library.

In 1806, Napoleon conquered Prussia. French troops occupied and sacked Weimar, where Goethe had lived since 1775. Although Goethe’s house was spared, many of his friends lost everything. Goethe reconciled himself to Napoleon’s empire, which he regarded as a legitimate successor to the Holy Roman Empire.

Two years later, Napoleon organized a grand congress at Erfurt, a short distance from Weimar. It was a summit meeting between Napoleon and Tsar Alexander I of Russia, intended to strengthen their alliance. The congress was also a theatrical display of French power. “I want to astound Germany with my magnificence,” said Napoleon. (1) The attendees paying court included most of the kings and princes of Germany, and notables from across Europe. Napoleon brought his favourite actor, François Joseph Talma, and the best actors and actresses of the Comédie-Française. They presented 16 French plays, chosen by Napoleon himself.

Napoleon wanted to co-opt the German cultural elite and enhance his reputation as a friend of the arts and literature. To this end, the great Goethe was invited to an interview.

Napoleon met Goethe on October 2, 1808 in the Governor’s Palace at Erfurt.

I have been summoned to the Emperor for eleven o’clock in the morning. A fat chamberlain, Monsieur Pole, tells me to wait. The crowd disappears. I am introduced to Savary and Talleyrand. I am called into the Emperor’s study. At the same time, Daru has his presence announced. He is immediately brought in. This makes me hesitate. I am summoned a second time. I enter. The Emperor is seated at a large round table. He is eating breakfast. On his right, at some distance from the table, is Talleyrand; on his left, Daru, with whom he discusses taxes. The Emperor signals to me to approach. I remain standing in front of him at a suitable distance. After looking at me for a moment, he says to me: ‘You are a man.’ I bow my head. He says: ‘How old are you?’

‘You are well preserved. You have written some tragedies.’

I replied the bare essentials. Daru began to speak…. He added that I had translated some French works and, for example, Voltaire’s Mahomet. The Emperor said: ‘That is not a good work,’ and went on in detail about how it was indecorous for the conqueror of the world to paint such an unfavourable picture of himself. He then brought the conversation to Werther, which he must have studied in detail. After several perfectly appropriate observations, he mentioned a specific part and said to me: ‘Why did you do that? It is not natural.’ And he spoke at length on this and with perfect accuracy.

I listened with a calm face, and I replied, with a smile of satisfaction, that I didn’t know whether anyone had ever made the same criticism, but that I found it perfectly justified, and that I agreed that one could find fault with this passage’s lack of authenticity. ‘But,’ I added, ‘a poet can perhaps be excused for taking refuge in an artifice which is hard to spot, when he wants to produce certain effects that could not be created simply and naturally.’

The Emperor seemed to agree with me; he returned to drama and made some very sensible remarks, as a man who had observed the tragic stage with a great deal of attention, like a criminal judge, and who felt very deeply how far French theatre had strayed from nature and truth.

He went on to talk about fatalistic plays, of which he disapproved. They belonged to the dark ages. ‘Why, today, do they keep giving us destiny?’ he said. ‘Destiny is politics.’

He turned again to Daru and spoke to him about taxes…. Marshal Soult was announced….

The Emperor rose, came straight towards me and, by a sort of manoeuvre, separated me from the other people in the line in which I found myself. He turned his back to those people and spoke to me, lowering his voice. He asked me whether I was married, whether I had children, and other personal matters.

He also questioned me on my relations with the house of the princes, on the Duchess Amalia, on the prince, and on the princess. I replied in a natural manner. He seemed satisfied, and translated for himself these replies into his language, but in slightly more forceful terms than I had managed.

I must also note that, in the whole of our conversation, I had admired the variety of his affirmative replies and gestures, because he was rarely immobile when he listened. Sometimes he made a meditative gesture with his head and said: ‘Yes’ or ‘That’s right,’ or something similar; or, if he had stated some idea, he most often added: ‘And what would Monsieur Goethe say to that?’

I took the opportunity to make a sign to the chamberlain to see if I could retire, and, on his affirmative response, I immediately took my leave. (2)

Napoleon met Goethe again on October 6, this time at Weimar, in the company of fellow writer Christoph Martin Wieland. On October 14, Goethe and Wieland were each awarded the cross of the Legion of Honour. Goethe revealed no details about about his conversations with Napoleon until many years later.

In 1815, Napoleon was defeated and exiled to the remote South Atlantic island of St. Helena, where he died on May 5, 1821. In 1828, Goethe told his friend Johann Peter Eckermann:

Napoleon was the man! Always enlightened, always clear and decided, and endowed with sufficient energy to carry into effect whatever he considered advantageous and necessary. His life was the stride of a demi-god, from battle to battle, and from victory to victory. It might well be said of him, that he was found in a state of continual enlightenment. On this account, his destiny was more brilliant than any the world had seen before him, or perhaps will ever see after him. (3)

When the Duke of Wellington met Napoleon’s wife

38 commments on “When Napoleon Met Goethe”

He went on to talk about fatalistic plays, of which he disapproved. They belonged to the dark ages. ‘Why, today, do they keep giving us destiny?’ he said. ‘Destiny is politics.’