At his birthday party at Joseph Bonaparte’s New Jersey estate in Napoleon in America, Napoleon is served some of his favourite food and wine. What were these, and what else did Napoleon like to eat and drink? 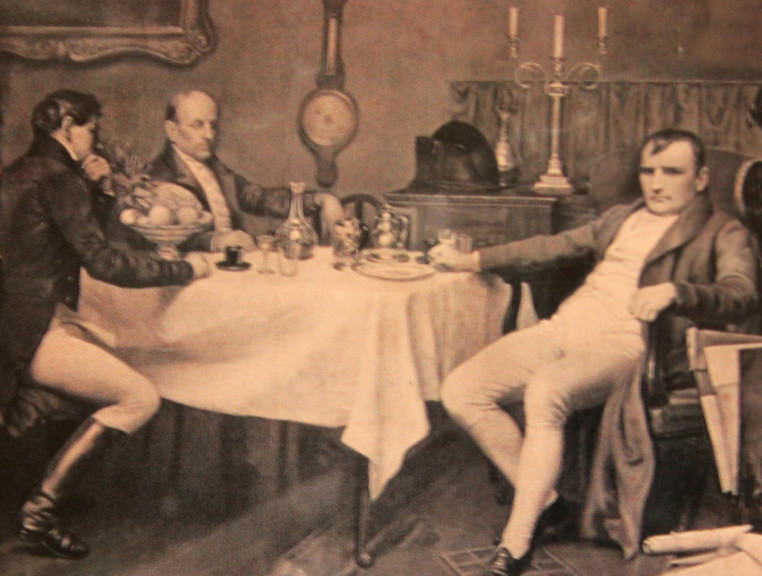 Napoleon in his dining room on St. Helena

Napoleon Bonaparte was not a gourmand. He tended to eat quickly, rarely spending more than 20 minutes at a meal. He often suffered from indigestion as a result. His second valet, Louis Étienne Saint-Denis, observed:

The simplest dishes were those which suited him the best…. He preferred a good soup (he liked it very hot) and a good piece of boiled beef to all the complicated and succulent dishes which his cooks could make for him. Boiled or poached eggs, an omelette, a small leg of mutton, a cutlet, a filet of beef, broiled breast of lamb, or a chicken wing, lentils, beans in a salad were the dishes which they habitually served at his breakfasts. There were never more than two dishes on the table for this meal – one of vegetables, preceded by a soup.

The dinner was more elaborate, the table more abundantly served, but he never ate any but the most simply cooked things, whether meat or vegetables. A piece of Parmesan or Roquefort cheese closed his meals. If there happened to be any fruit it was served to him, but if he ate any of it, it was but very little. For instance, he would only take a quarter of a pear or an apple, or a very small bunch of grapes. What he especially liked were fresh almonds. He was so fond of them that he would eat almost the whole plate. He also liked rolled waffles in which a little cream had been put. Two or three lozenges were all the candy that he ate. After his meals, whether breakfast or dinner, they gave him a little coffee, of which he often left a good part. Never any liqueurs. (1)

He preferred the simplest dishes: lentils, white beans, green beans, which he loved but was afraid to eat for fear of finding threads which he said felt like hair, the very thought of which would turn his stomach. He was fond of potatoes prepared any way at all, even boiled or grilled over embers. (2)

According to Louis Constant Wairy, Napoleon’s valet from 1800 to 1814:

The dish the Emperor liked best was that species of chicken fricassee which has been called poulet à la Marengo on account of this preference of the conqueror of Italy. He also liked to eat beans, lentils, roast breast of mutton, and roast chicken. The simplest dishes were those he preferred; but he was not easy to please in the quality of his bread. (3)

The popular story that Chicken Marengo was created by Napoleon’s chef Dunand after the Battle of Marengo in Italy in June 1800 is a myth. The dish was probably created by a restaurant chef in honour Napoleon’s victory. (4) Louis Antoine Fauvelet de Bourrienne, Napoleon’s private secretary from 1798 to 1802, wrote:

He ate almost every morning some chicken, dressed with oil and onions. This dish was then, I believe, called poulet à la Provençale; but our restaurateurs have since conferred upon it the more ambitious name of poulet à la Marengo. (5) 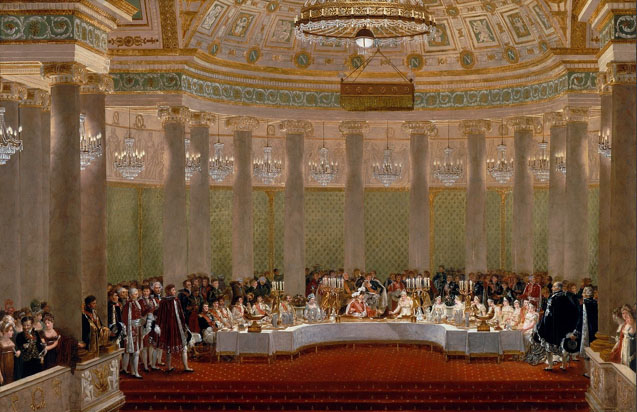 The wedding banquet of Napoleon and Marie Louise, by Alexandre Casanova Dufay

Napoleon was not a big drinker. With his meals he took wine diluted with water. Bourrienne wrote:

Bonaparte drank little wine, always either claret [Bordeaux] or Burgundy, and the latter by preference. After breakfast, as well as after dinner, he took a cup of strong coffee. I never saw him take any between his meals, and I cannot imagine what could have given rise to the assertion of his being particularly fond of coffee. When he worked late at night he never ordered coffee, but chocolate, of which he made me take a cup with him. But this only happened when our business was prolonged till two or three in the morning. (6)

When he was in power, Napoleon’s favourite wine was Chambertin. One of Napoleon’s St. Helena companions, Count de Las Cases, recorded:

During fifteen years he constantly drank a particular sort of Burgundy (Chambertin), which he liked and believed to be wholesome for him: he found this wine provided for him throughout Germany, in the remotest part of Spain, everywhere, even at Moscow, &c. (7)

In exile on St. Helena, Napoleon switched his tipple, as recounted by Saint-Denis.

His drink at St. Helena was claret; in France it had been Chambertin. He rarely drank his half bottle, and always with the addition of as much water as there was wine. There were hardly ever any fine wines. Sometimes, in the daytime, he would drink a glass of champagne, but never without adding at least as much water. (8)

On St. Helena Napoleon also enjoyed a golden dessert wine from South Africa, known as vin de constance or Constantia, which Las Cases procured for him.

[T]he Constantia wine, in particular, had pleased the Emperor. It was reserved for his own use, and he called it by my name. In his last moments, when he rejected everything that was offered to him, and not knowing what to have recourse to, he said – ‘Give me a glass of Las Cases’ wine.’ (9) What Napoleon’s opponents thought he liked to eat. “The Plumb-pudding in danger, or, State Epicures taking un Petit Souper,” an 1805 caricature by James Gillray showing Napoleon and British prime minister William Pitt carving up the globe.

As for the dessert known as the Napoleon, it has no direct connection with the Emperor. Known as the mille-feuille in France, the pastry apparently predates Napoleon. Its English name probably comes from napolitain, the French adjective for the Italian city of Naples. See Wikipedia for more about that.

Recipe for Chicken Marengo from 1825

If you’d like to sample Napoleon’s favourite food as he might have eaten it, you can try this.

Cut up a chicken as for chicken fricassee. Put it in a pan with about a cup of oil and some fine salt. Put the legs in first, then five minutes later add the other pieces. Let it cook until it browns. Add a bouquet garni just before the chicken is cooked. You can add mushrooms or truffles, peeled and cut into strips. When everything is finished cooking, put the chicken on a platter and keep it warm. Heat a pot of Italian sauce and gradually add the oil in which the chicken was cooked, stirring constantly. Pour the sauce over the chicken. You can add fried eggs or croutons and serve it with clarified butter instead of oil. (10)

For more about Napoleon and food, see my post about “Sweetbreads, Sweetmeats and Bonaparte’s Ribs” and “Appetite for War: What Napoleon and His Men Ate on the March” by  Nina Martyris on the NPR website.

30 commments on “What did Napoleon like to eat and drink?”

The simplest dishes were those which suited him the best…. He preferred a good soup (he liked it very hot) and a good piece of boiled beef to all the complicated and succulent dishes which his cooks could make for him.