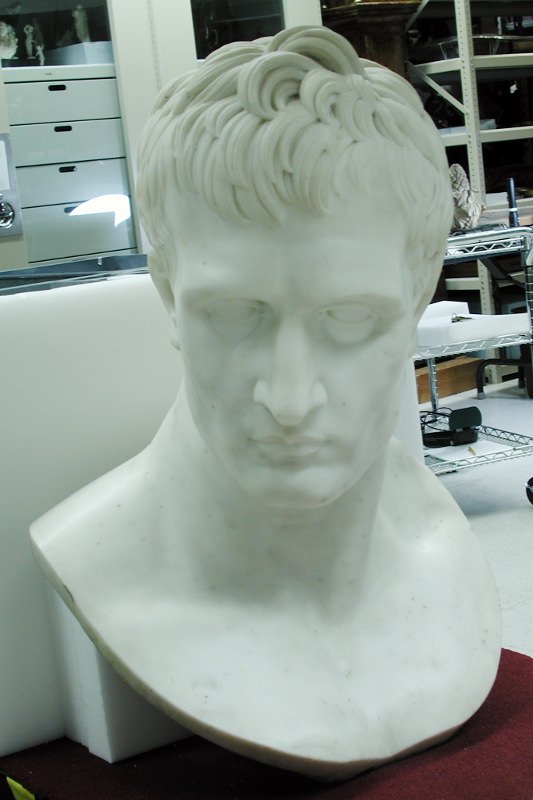 Bust of Napoleon, after a model by Antonio Canova, circa 1808-1814. Source: Metropolitan Museum of Art, Bequest of Roger Prigent, 2015

In the years after Napoleon Bonaparte’s 1815 defeat at the Battle of Waterloo, London hosted numerous exhibits related to the fallen French Emperor. Napoleon’s carriage was displayed, his battles formed the subjects of panoramas, the events of his life were depicted, and his portrait and various effects appeared on show. The oddest exhibit was a girl with Napoleon in her eyes.

A sort of miracle

The girl was named Josephine Louis. She was born around 1825 to a peasant family in the Lorraine region of France. By the time she was two and a half years old, Josephine was the talk of Paris.

It is said that [her eyes] exhibit in distinct letters, which grow in size as she advances in age, the words ‘NAPOLEON EMPEREUR,’ in capitals. The word Napoleon is above, and the word Empereur below the sight of the eye, which is a lively blue. She has been visited by the most eminent anatomists who were unable to detect any deception in appearance. The fact seems to be strongly attested; and is of course, wholly unaccounted for. The people seem to look upon it as a sort of miracle; while the more reflecting regard it merely as one of those sports of nature, which are so fantastic, and at times so amazing. (1)

François Magendie and Georges Cuvier were among the learned men who examined her. A letter printed in the London Medical Gazette, dated Paris, May 26, 1828, observed:

[T]here appears to be no doubt that the effect is natural, and not, as you suppose, by the operation of tattooing, or puncture. (2)

The Countess de Boigne described the cause to which the parents attributed their daughter’s unusual eyes.

In 1828, or perhaps it was in 1827, a little girl of two years old was brought to me with bright blue eyes which seemed in no way remarkable at first sight. When, however, the eyes were examined more carefully, it was seen that the iris was composed of little filaments forming white letters on a blue background placed around the pupil, and making the words ‘Napoleon Emperor.’ The word ‘Napoleon’ was equally distinct in either eye; the first letters of the word ‘Emperor’ were indistinct in one eye and the last letters in the other. The little girl was very pretty, and seemed to enjoy excellent sight.

Her mother, who was a Lorraine peasant, told me very simply what she considered to be the cause of this strange freak of nature. A brother, to whom she was deeply attached, had drawn a bad number in the conscription, and as he went away had given her a newly-struck coin of twenty sous, asking her to keep it in memory of him. A short time afterwards she learnt that his regiment was passing three leagues away from her village, and she went to the spot to see him for a moment. As she returned she was exhausted with fatigue and thirst, and stopped at a tavern half way upon her road to drink a glass of beer. When it was necessary to pay, she perceived that she had given her brother all the money she had upon her, and had nothing left but the precious coin of twenty sous, which she always carried upon her person. She asked for credit, but the inn-keeper was pitiless. She therefore sacrificed her poor treasure with regrets, and came home in despair. Her tears flowed incessantly. The next Sunday her husband went in search of the coin, and succeeded in restoring it to her. When he brought it back, her joy was so keen that the child leaped in her womb, and, in her own words, she left ‘faint with delight.’

The little girl bore in her eyes the inscription upon the coin. I have no intention of writing a physiological treatise to explain the possibility of this fact; I merely affirm that I have seen it, and that any fraud was impossible. The doctor in the neighbouring village had proposed to show the child for money, and the mother accompanied him. The Government objected to any public performance, advertisements were not permitted, and their stay at Paris was cut short. (3) 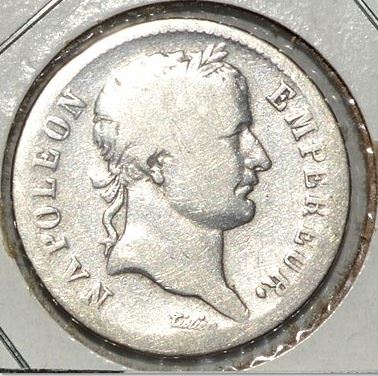 A silver franc from 1810 with the inscription “NAPOLEON EMPEREUR”

The Countess must have garbled the tale, as it is impossible for a Napoleonic coin to have been freshly minted at the time of the mother’s pregnancy – a decade into the Bourbon restoration. More simply, newspapers reported that “the mother of the child lost a favourite brother during the late war, who, on his departure for the army, gave her a franc-piece as a keepsake, which piece she used to be continually looking at when pregnant with this present child.” (4)

Exhibit at the Royal Bazaar

What the Countess did get right is that the government of Charles X would not allow the little girl to be exhibited in Paris. Thus, in July 1828, Josephine’s parents took her on a steamship to London.

The Marchioness of Downshire is to show the child to the King before the public can see her; the parents have letters to all the chief medical men in London, and to his Royal Highness the Duke of Sussex, who had been previously made acquainted with this most surprising phenomenon. (5)

By August, the girl with Napoleon in her eyes was on display for a fee at the Royal Bazaar on Oxford Street. The Bazaar had opened just a few months earlier, under the proprietorship of silversmith Thomas Hamlet. He billed it as “the most elegant and splendid establishment in London, having constantly on sale a brilliant assortment of fashionable articles of every description at the very lowest prices.” (6) It also showed dioramas.

An ad for the Royal Bazaar exhibit of the girl with Napoleon in her eyes, The Morning Post (London), August 19, 1828

We have just seen, at the Royal Bazaar, the little Josephine, from Paris, on whose eyes are inscribed the words Napoleon Empereur and Empereur Napoleon; and certainly it is (not to pun) a very extraordinary sight. The child is a pretty and lively girl, of about three years of age, with a rather capacious forehead, and light, or we should say, not very dark, blue eyes. Radiating about the pupil of each in the iris, removed a small distance from the pupil, and almost touching the outward circle, appear the characters alluded to. In the left eye, the word Napoleon is uppermost; in the right, the word Empereur. The colour of the letters is almost white, but shot through, like what is called silk, by the blue of the crystalline humour. This, and the motion of the eye, renders the whole inscription a little indistinct; but such parts as NAP and other separate letters are tolerably obvious, without the slightest aid from the imagination of the beholder. (7)

[A]t first sight of the child [the letters] appear like rays, which render the eyes very vivacious and sparkling. The accuracy of the inscriptions is much assisted by the stillness of the eye, on its being directed upwards, as to an object on the ceiling of the room, &c.; and with this aid the several letters may be traced with the naked eye. (8)

Not everyone was immediately able to discern the inscription.

A casual observer would doubtless notice that the appearance of the organ was unusual, but it would not be without a minute investigation that he would be able to trace the letters forming the name described, and even then, allowance must then be made for a fanciful imagination. Upon looking as attentively as we were able, we certainly think we could trace the letters EMP and NAP, but visitors will be grievously deceived if they expect to find them as distinct as the letters upon their direction cards. (9)

At least one poor fellow couldn’t see it at all.

An old gentleman, not very clear sighted, having visited this wonder the other day, and having failed to discover anything like printing or letters on the child’s right iris, proceeded to examine her lip…but the little girl undeceived him and said, ‘It not dere, Sir – it is altogeder my eye.’ (10)

These are the only reported words of young Josephine, who was described as having “marked and rather interesting features” and being “of a slight form, and short for her age.” (11) There is no report on how the three-year-old felt about sitting still for long periods with her eyes open so strangers could peer into them.

Not a unique case 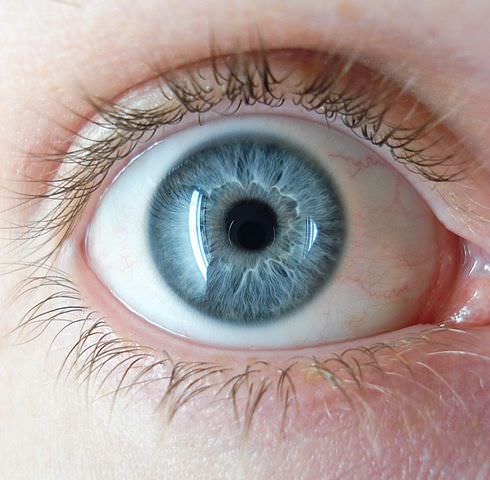 “With the help of a little imagination, something like letters may occasionally be discovered”

There are various instances on record in which individuals have been said to have words (generally a name) marked upon the iris. For the most part, these individuals have had light-coloured irides, marked with lines of various figure, and generally of darker colour; and, with the help of a little imagination, something like letters may occasionally be discovered. In the present case, the iris is of a light blue or grey colour, and is traversed by lines of a lighter colour, or nearly white. Among the irregular figures thus formed, a willing spectator may read Napoleon Empereur – or anything else. (12)

Shortly after Josephine arrived in London, a letter appeared in The Morning Post stating that, according to the Diary of John Evelyn, in April 1701 “a Dutch boy, about nine years old, was carried by his parents to Shewe, who had about the iris of one eye the letters Deus Meus, and of the other Elohim in the Hebrew character.” (13)

And before long the Manchester Guardian claimed that a boy, age 11, “had lately been at Manchester, having the name of his father, ‘John Wood,’…perfectly legible on the iris of his right eye, and the date of his birth, ‘1817,’ on that of his left!” (14)

The girl with Napoleon in her eyes was exhibited at the Royal Bazaar until at least February of 1829. On May 27, 1829 the Royal Bazaar was destroyed by fire. It was rebuilt and reopened later that year. There is no word on what happened to young Josephine.

When the King & Queen of the Sandwich Islands Visited England

14 commments on “The Girl with Napoleon in her Eyes”

It is said that [her eyes] exhibit in distinct letters, which grow in size as she advances in age, the words ‘NAPOLEON EMPEREUR,’ in capitals.