The “Napoleon delusion,” a form of mental illness in which a person believes he is Napoleon Bonaparte, has long been a popular stereotype, as depicted in the short film Maniac Chase (1904), among others. “Delusions of grandeur” accounted for more than 25 percent of diagnoses of insanity in France in the 1830s. (1) In 1840, the year that Napoleon’s remains were returned to France, over a dozen “Napoleons” were admitted to the Bicêtre asylum on the outskirts of Paris. (2) While there is only one identified case of a woman claiming to be Napoleon, many women claimed to be Napoleon’s wife. What follows is a description of such a “Josephine,” as reported by an unnamed writer in Philadelphia in 1817. 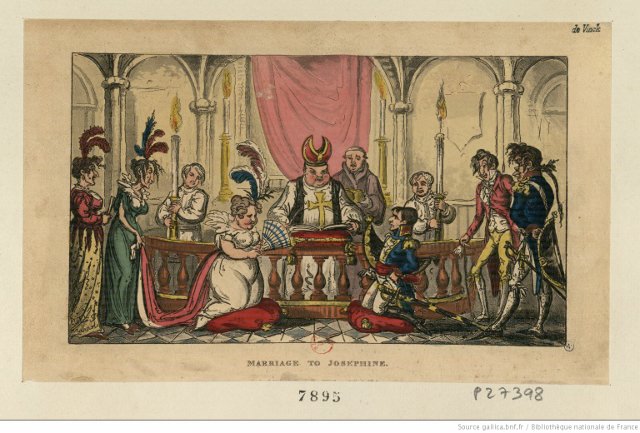 The case of Margaret Bonaparte

“A few years since I was personally acquainted with a lady of a reputable family, who had an inordinate attachment to splendour and equipage; which the circumstances of her husband would not permit him to indulge. Her mad love of gaudy, but ideal bliss, together with the disappointment of her extravagant wishes, produced a chronical distemper of the mind. Her dress became highly expensive and fantastic: and she would take possession of any elegant carriage which she found drawn up at a neighbour’s house; giving the coachman directions to drive to some spacious abode, which she deemed her own. In one of these excursions she was driven to the Lunatic Asylum; and, rather against her will, detained there. It was, however, ‘her Palace;’ and all the other insane inhabitants of the place were either her servants, or her guests. Among others who occasionally visited the Asylum, she saw the writer.

“At this time Napoleon Bonaparte enjoyed the wealth and dignity of a powerful emperor; and who should be the husband of our lady, but the potent monarch of France, and temporary creator of the destinies of Europe! She imagined herself Josephine; and, although, in reality, she had never seen him who is now the exile of St. Helena; yet she had seen an engraving of his face; and the profile was like — yes, it was like that of the writer. For many months he was the Emperor, and she was his spouse; confined by him in a splendid castle, that he might make severe trial of the strength of her affection for him. Her husband and daughters she would not so much as recognize, or deign to answer, during all this time of her imaginary exaltation to a throne and a crown. Any thing which the keeper desired me to request of her, she would perform; and any thing which he could persuade her I had ordered was a matter of gratification. Her white satins and florentine silks were not abandoned in the place of confinement; but she would daily appear in all the stateliness and pride of universal domination.

“The means of writing were not always afforded her; but when they were, Napoleon was the subject of every line. One Lords-day she solicited pen and ink, and was indulged by the keeper, under this express agreement, that she should write only on a serious subject: and so she filled all the blank leaves of a Psalm-book with a rhapsody which began thus: ‘I am required to write only on a serious subject. What subject can be more serious to me, than my present separation from my dear Napoleon?’

“That your readers may have some opportunity of becoming acquainted with her talents, and her state of mind, I shall subjoin the copies of two letters which she addressed to your correspondent.

How novel the style — how various and impressive the emotions! I desired greatly this privilege of addressing you — can scarcely realize the indulgence — and yet, how astonishing! I certainly address the Emperor of the world as my own dear husband, and consider the implements of conveying a thought, a wish, the greatest favour! Possessing them, what can I say to you? A volume could not contain it, and yet my pen is mute; nor can my hand, my tremulous hand, retrace the great, the vast, the awful ideas that nearly overpower my imagination; nor engage in that converse sweet that is comprised in objects more minute. I certainly have caught the contagion, or mania of objects that surround me. I am bewildered. The sublime, the profound, the infinite; the burlesque and trifling; the tender and endearing; the repulsive and forbidden; sham quarrels, and checked reconciliations: grandeur, magnificence in prospect; real sufferings, indignities and respect; the sway of the hearts and affections of millions in submissive subjection to a small single control, &c. &c. are so blended and confounded, that I can give no intelligible expression to any one of them.

The present hour, aided by the powerful stimulant of sense, predominates, and urges you, in all the language that is persuasive or pathetic, by every motive that can affect the heart, towards an object beloved; — yes, beloved, — to put a period to my present probation. Let candour prevail, and inform me what depends on myself that may abridge the period of my residence at this Palace, that bars me from intimate communion with you, and causes all this delirium and rhapsody.

‘Dear husband; our union, so frequently confirmed by the expression of our will, so repeatedly solemnized by our affectionate subjects, in the various cathedrals and chapels we have attended, cannot now be affected by the voice or will of others, be their inclination or influence what it may. Hasten then to the relief of your spouse. An army would be superfluous: your presence and authority would dissolve the charm, and unbar the gates that withhold me from your embrace. Mount your swiftest, fleetest courser, and speed — fly to the relief of your Margaret. Say that this day shall end the perturbation of her mind, or turn all the energies of her emotions into a new channel, by a transit of situation; or hush them into peace and sweet tranquillity by the soothings of endearment and affection, the kindly office of tender friendship, of conjugal love. I wish to say much: do you imagine all for me; being under restraint lest some of the enemy’s scouting parties should intercept this, and give it publicity, which would be painful to delicacy, and tenderness that shrinks from the observation and criticism of others. I will only add, hasten to the relief of your affectionate wife Margaret — your own dear MARGARET BONAPARTE.

P.S. This is conveyed with great risk, by the keeper of the castle. I hope it may arrive safe, and my answer be from your own lips. M.B.

Thank you for this means of address, my husband! I am wretched at our separation. What can I urge that has not already become tiresome by repetition? Does any thing depend on me? Why not put it in my power; and convey intelligence? I tax not my husband with want of gallantry, but myself with impropriety or indelicacy.

Oh! no — are you not my husband? Does not that title convey to you indescribable sensations, immense prospects, endearing, mutual obligations? Does my Napoleon realize the character he has thus assumed; and can he hold at a distance, try with relentless severity and perseverance, all the soul of his afflicted Margaret? Does not my dear husband see that the severity and durance of these trials have really an unfriendly effect on his own heart? I will not again ask, ‘Have you a heart? Is it callous?’ Yes, you have one, and it is in your Margaret’s possession. With all your sang froid and smiling indifference, it has a language better understood, perhaps under a well acted part, by some small tokens, that the manner and language were not real, were only the expression of the ‘sovereign austere,’ not of the tender, sympathizing friend! Again, let me ask — does any thing depend on me?

Nearly six months since we met in the German Chapel!!! Oh! my dear husband, I entreat you to exert yourself — leave nothing to me, but fetch me home. Bid me come to you, come without disguise to me: come now! come on receipt of this order. The bar of communication removed from between us, need I appoint the manner or means that would be acceptable? Oh! spare your Margaret; at least spare me. What is the obstacle? There was none to our marriage — it was publicly performed. Was it then my local situation? I came here in entire obedience, implicit obedience to your commands; and can be detained here by no other authority. Has any person dared to make use of your name, unauthorized — he is amenable to you: still am I solely subject to the mandate in your name that conveyed me here.

I care not for the carriage, horses, or driver: if yours, they are at your command, or any other, set me down again, if you do not choose to come for me yourself To the slightest communication of your will I have endeavoured to conform, so far as known: but enough of this repetition. Why is my Napoleon separated from his

N.B. — — will hand you this. I beg you will commission him with a message in return, for which he is requested to wait. Adieu, for a very little time, when I hope we shall meet without restraint, to the relief and happiness of your affectionate

“Margaret is her own Christian name; and Josephine, I presume, must be her name of empire. A little inconsistency must be expected in a crazy person: but may I not be permitted to say, that very few ladies, were they really in the situation in which she imagined herself to be, would have written with more ingenuity, persuasion, art, and tenderness? She blames Napoleon, while she apparently intends to accuse only herself; and she entreats him with genuine eloquence.

“In the foregoing lines I have stated facts; and the letters are copies of genuine epistles which are still in my possession. Had Mrs. — contemplated the greatest monarch of the world, driven away like an eagle to the top of a sea-beaten rock, as forsaken, forlorn, and unable to flutter out of his nest, she would not probably, in her ambition, have imagined him to be her husband, nor would she have thought that she saw her ‘Dear Napoleon’ in the writer.

6 commments on “The Josephine Delusion: A Woman Who Thought She Was Napoleon’s Wife”

Very few ladies, were they really in the situation in which she imagined herself to be, would have written with more ingenuity, persuasion, art, and tenderness,