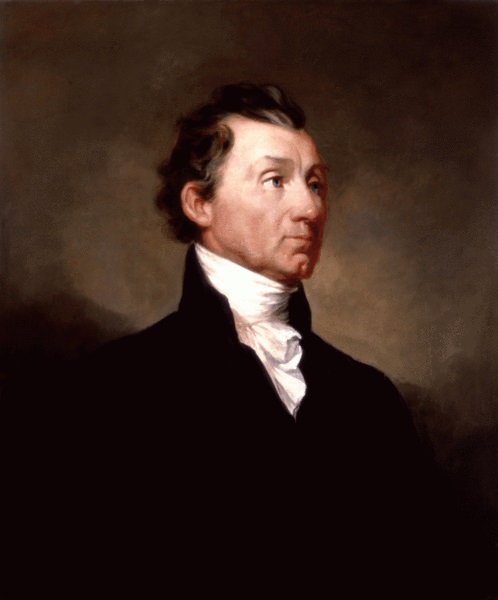 James Monroe by Samuel Morse, circa 1819

James Monroe, president of the United States from 1817 to 1825, was hardly a barrel of laughs. His speeches and correspondence exhibit little playfulness. Yet Monroe was said to be warm and good-natured in person, with a sense of humour that could surprise his acquaintances. Judge E.R. Watson of Charlottesville, Virginia, recalled:

I have several times seen [Monroe and James Madison] together at Montpelier, and, as it seemed to me, it was only in Mr. Madison’s society that Mr. Monroe could lay aside his usual seriousness and indulge in the humorous jest and merry laugh, as if he were young again. (1)

Here are some quotes and anecdotes that illustrate the gentle humour of James Monroe.

About to embark on a hazardous journey from New York to Detroit in 1784, 26-year-old Monroe wrote to Thomas Jefferson:

It is possible I may lose my scalp from the temper of the Indians, but if either a little fighting or a great deal of running will save it, I shall escape safe. (2)

On the birth of his daughter

Mrs. Monroe hath added a daughter to our society who, tho’ noisy, contributes greatly to its amusement. (3)

On the age of a friend

In 1811, Monroe wrote to his friend William Short, who had recently returned to the United States from Europe:

You expressed a desire to sell your land near me. Cannot you come & reside on it? If you cannot prevail on a Lady from one of our great cities to bury herself there with you, one might be found in the neighborhood, of merit and worth, to whom the solitude would not be irksome. If you ever intend to make such an arrangement, you ought not to postpone it much longer. I am now 51 years of age; you are I presume not more than 10 years younger. In 1795, when we were in Paris together you were about 5 years younger. In 1779, when we were at College, the difference between us was still less. I hope you will take this affair into consideration, & decide in favor of my council, & come and establish yourself near me ere long. (4)

In 1817, Monroe undertook a “good-will” tour of the northern and eastern states. Abigail Adams, the wife of second president John Adams and mother of Monroe’s successor, John Quincy Adams, observed:

When President Monroe was upon his tour surrounded by the military, encompassed by citizens, harassed by invitations to parties and applications innumerable for office, some gentleman asked him if he was not completely worn out – to which he replied, ‘Oh no, a little flattery will support a man through great fatigue.’ (5)

On a political rival

After he retired from the presidency, Monroe was asked for his opinion of John Randolph, a fiery congressman from Roanoke, Virginia, who headed the “Old Republicans,” a group often at odds with others in Monroe’s Democratic-Republican party. Monroe reportedly replied:

Well, Mr. Randolph is, I think, a capital hand to pull down, but I am not aware that he has ever exhibited much skill as a builder. (6)

A pun by President Monroe

This anecdote regarding the humour of James Monroe appeared in the 1860s. It may be apocryphal.

A Scotch servant, employed about the executive mansion, who had a broad accent and a good fund of cold humor, had been charged, by certain persons who had projected a monument in honor of something or somebody, with a message to an appropriate official, who, it seems, was not the President. But old Sandy sought the Chief Magistrate, in whose personal service he was, and conveyed the communication to him. Mr. Monroe instructed him to address the message elsewhere, and thereupon Sandy, persisting like a Scotchman, said:

‘Your honor, it is about the monument.’

‘Well, Sandy,’ said Mr. Monroe, drawing himself up erect and symmetrical, ‘don’t you see I am not the mon you ment.’ (7)

President James Monroe appears as a character in Napoleon in America.

2 commments on “The Humour of President James Monroe”

It was only in Mr. Madison’s society that Mr. Monroe could lay aside his usual seriousness and indulge in the humorous jest and merry laugh, as if he were young again.