In addition to being dependent on personal taste, humour tends to be specific to culture, to place and to time. This makes it tricky to weave jokes into fiction set in the past, like Napoleon in America. What did people find funny 200 years ago? How well have those jokes held up over time? You be the judge of this humour from the early 19th century. 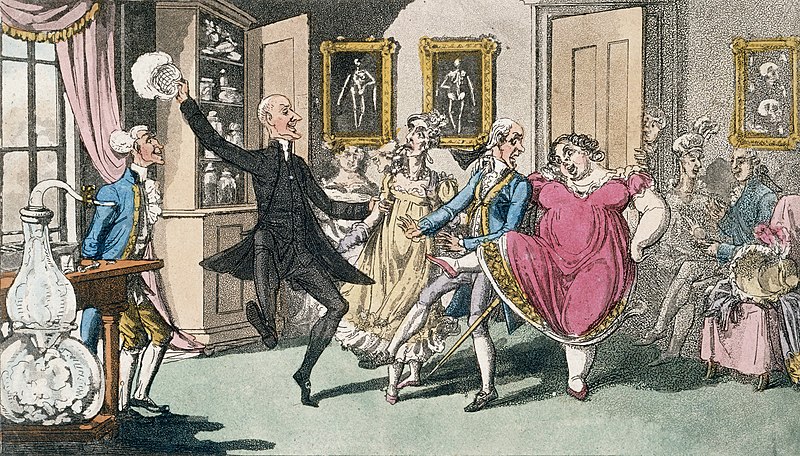 A wag describing an elephant remarked that this sagacious animal takes care never to be robbed, for he always carries his trunk before him. (1)

A coquette at a ball asked a gentleman who was adjusting her tucker if he could flirt a fan. ‘No madam,’ answered he, proceeding to use it, but I can fan a flirt.’ (2)

An officer, once relating to his friend the circumstances of his having fallen over a pig when full dressed for a ball, the other replied immediately, ‘that must have been a vile boar.’ (3)

A school-master, who was charged with using the birch rather too violently, declared that it was the only way to make a dull boy smart. (4)

A gentleman once observing that a person famous in the musical line led a very abandoned life. ‘Aye,’ replied a wag, ‘the whole tenor of his life has been base.’ (5)

A punster observing a person folding some bank bills remarked, ‘you must be in excellent business, for I see you double your money very easily.’ (6)

A little boy having been much praised for his quickness of reply, a gentleman observed [that] when children were so keen in their youth, they are generally stupid and dull as they advance in years. ‘What a very sensible boy must you have been, Sir, then,’ replied the child. (7)

A scholar, a bald man, and a barber, travelling together, each agreed to watch four hours at night, in turn, for the sake of security. The barber’s lot came first, who shaved the scholar’s head when asleep, then waked him when his turn came. The scholar, scratching his head, and feeling it bald, exclaimed: ‘You wretch of a barber, you have waked the bald man, instead of me!’ (8)

A coxcomb, by no means an Adonis, was remarkable for looking at his face in a glass wherever he met one; which, being mentioned by a person as an instance of his conceit, another said, ‘He thought it rather a mark of his courage, for it showed that he was not easily frightened.’ (9)

A fop, introducing his friend, a plain man, into company, said, ‘Gentlemen, I’ll assure you he is not so great a fool as he seems.’ ‘No,’ replied the gentleman, ‘that’s the difference between me and my friend.’ (10)

A French gentleman, being married a second time, was often lamenting his first wife before his second, who one day said to him, ‘I assure you, Sir, no one regrets her more than I!’ (11)

Lady H. one day said to her Lord, who is much attached to reading: ‘I wish I was a book, that I might always have your company.’ ‘Then,’ answered he, ‘I should wish you an almanac, that I might change once a year. (12)

A vixen of a wife, abusing her husband for his mercenary disposition, told him that if she was dead, he would marry the devil’s eldest daughter, if he could get anything by it. ‘That’s true,’ replied the husband, ‘but the worst of it is, one can’t marry two sisters.’ (13)

A young gentleman who had had the misfortune to bury five wives, being in company with a number of ladies, was severely rallied by them upon the circumstance. At last, one of them put the question to him, how he managed to have such good luck. ‘Why, madam,’ says he, ‘I knew they could not live without contradiction; therefore I suffered them to have their own way.’ (14)

One said that to live quiet in a marriage state, the husband ought to be deaf that he may not hear his wife’s impertinence, and the wife blind that she may not see her husband’s gallantries. (15)

As Marshal Saxe was one day walking in the Tuileries with Madame Pompadour, one said: ‘There goest the king’s sword and his sheath.’ (16)

A poor woman, who had borne twenty-two children, hearing many observe how much the staff of life was wanted during the late scarcity of grain, said it was odd that she and her family were no more exempt from poverty than others, although her husband had one of the best staffs of that sort in the world. (17)

A young lady being rebuked for not writing to her consort, who was on a journey, said it was out of her power, as he had carried away the pen with him, and left her nothing but the ink-stand. (18)

A country farmer going across his grounds in the dusk of the evening, espied a young fellow and a lass very busy near a five-bar gate in one of his fields; and, calling to them to know what they were about, said the young man: ‘No harm, farmer: we are only going to prop-a-gate!’ (19)

Two dashing ladies of easy virtue going down Gracechurch Street one evening were repeatedly asked by the different coachmen if they were not going to Greenwich or Deptford. At length one of the coachmen, a greater wag than the rest, cried out, ‘Pray don’t plague the ladies so; they are not going your road – they are going to Clap’em.’ (20)

A soldier refused to take food previous to an engagement because he was not sure of living long enough to allow it time for digestion. (21)

In besieging a certain town, the soldiers had been strictly forbidden to give quarter to anyone. An officer however begged hard for his life of one of the besiegers. Ask me anything else, replied he; but for your life I cannot consent. (22)

When the Persian ambassador was in England, he was paid a handsome compliment by Captain Topham. As he was showing the many wounds he had received in the wars with the Turks, the captain said that his excellency’s skin would sell for little or nothing, it had so many holes in it. (23)

In the rebellion, a villain stole into the King’s Mews, where the light horse were stationed, and cut off the tails of all the horses in the regiment. When it was discovered, the captain, greatly vexed, cried out, among other ejaculations: ‘What must we do!’ ‘Do!’ said a way near him, ‘sell them by wholesale.’ ‘Why so,’ said the captain. ‘Because,’ replied he, it is plainly to be seen we cannot re-tail them!’ (24)

Certain peasants complaining to a captain that his soldiers had robbed them, he asked whether they had left them anything? They answered, ‘Yes!’ ‘Then,’ said the captain, ‘they were none of my soldiers’ for they would have cleared all!’ (25)

A low Frenchman bragged that the king had spoken to him. Being asked what his majesty had said, he replied, ‘He bade me stand out of his way!’ (26)

A Scotsman being accosted by a duke, who wished to create a laugh at the expense of his national accent, asked him where he had been. ‘Shooting,’ he replied. ‘Shooting what?’ said the Duke. ‘Fools,’ meaning fowls. ‘Fools! What sort of fools?’ ‘Dukes,’ i.e. ducks, and such sort of fools. (27)

A gentleman talking of the four elements expressed great admiration at the creation of water. ‘Lord, Sir,’ said a merry lady ‘there’s nothing so very curious in that – for I can make it!’ (29)

A gentleman talking to a fisherman one day at Brighton asked him whether the Prince of Wales ever went to church. ‘Lord, and please your honour,’ said the fisherman, ‘what should he go to church for? We poor souls are obliged to pray for ourselves, but there are enough to pray for him!’ (31)

A bad Italian preacher one day, in his sermon, panegyrised a saint; and, in the heat of his discourse, asked with great emotion: ‘Where shall I place my saint?’ A merry fellow, who was tired of the gibberish, cried out in a loud voice: ‘Here I am going; you may give him my place!’ (32)

A certain preacher, having changed his religion, was much blamed by his friends for having deserted them. To excuse himself, he said he had seven reasons; and being asked what they were, replied, ‘a wife and six children.’ (33)

‘See how my harvest is ripening!’ said a carpenter to his neighbour, a surgeon, as they both stood viewing some houses on fire. ‘And see, mine is ready to reap!’ answered the latter, as he removed a piece of lighted timber which had just fallen on and ground his friend’s foot to powder. (34)

Mr. Cruikshanks the surgeon, being sent for to a gentleman who had just received a slight wound in a rencontre, gave orders to his servant to go home with all haste imaginable and fetch a certain plaster. The patient, turning a little pale, cried out: ‘Lord, Sir, I hope there is no danger?’ ‘Yes indeed there is,’ answered the surgeon, ‘for if the fellow does not set up a good pair of heels, the wound will heal before he returns.’ (35)

A medical gentleman, in an advertisement, informed the public that he had removed from his old station to a place near the churchyard for the accommodation of his patients. (36)

A counsellor told a rich client that his adversary had removed his suit from the King’s Bench to the Court of Chancery; on which the latter replied: ‘Let him remove it to the devil, if he pleases; I am sure my attorney will follow it!’ (38)

A lawyer, being ill, made his will, and bequeathed all his estate to fools and lunatics. Being asked why he did so, he replied: ‘From them it came, and to them it shall return.’ (39)

Able Was I Ere I Saw Elba: 19th-Century Palindromes & Anagrams

A wag describing an elephant remarked that this sagacious animal takes care never to be robbed, for he always carries his trunk before him.