John Quincy Adams was the first president to install a billiard table in the White House. This “gambling furniture” in the “President’s Palace” exposed Adams to much unfair criticism, and was used against him by supporters of Andrew Jackson in the presidential election campaign of 1828. 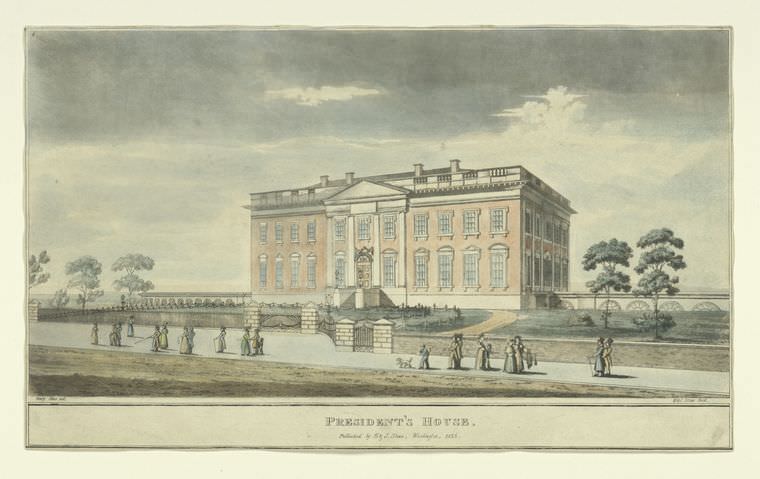 The President’s House by Henry Stone, 1826. John Quincy Adams installed the first billiard table in the White House in 1825.

A resource for exercise and amusement

John Quincy Adams, who appears as US Secretary of State in Napoleon in America, became the 6th President of the United States in March 1825. Two months later, he bought a second-hand billiard table, had it covered with new felt cloth, and installed it in the White House. For Adams, a hardworking and studious man, the game was a pleasant distraction. He wrote in his diary at the end of May 1825 that most of his evenings were “wasted in idleness or at the billiard-table, a resource both for exercise and amusement.” (1) In July 1825, he noted that he would typically “[p]lay billiards from six to seven or eight [p.m.], and generally retire to bed between eight and nine.” (2)

The President’s enjoyment of billiards did not attract public attention until March of the following year, when a House of Representatives committee chaired by New York representative Stephen Van Rensselaer submitted a report to Congress concerning the finishing and furnishing of public buildings. The report included, as one of many appendices, a detailed account of the manner in which the $14,000 appropriated for White House furnishings in the previous year had been expended. The account was compiled by John Quincy Adams’ 22-year-old son and private secretary, John Adams Jr., who declared “the expenditures have all been made with an eye to the strictest economy.” (3) Among the 124 items listed were the billiard table ($50), the new cloth and repair work ($43.44), cues ($5), billiard balls ($6), and chessmen ($23.50).

Gambling in the White House? 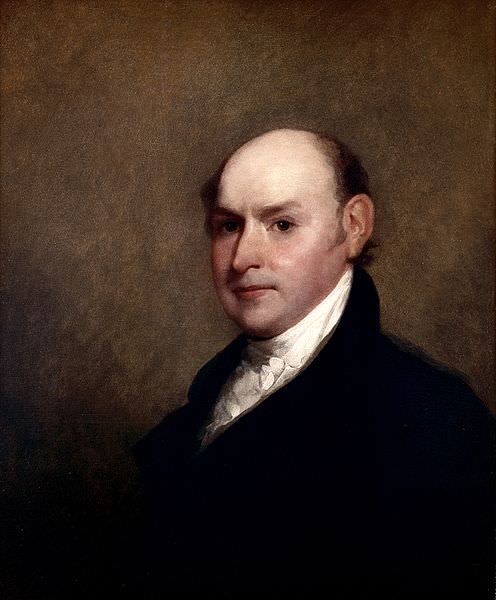 When John Quincy Adams learned of the report, he told Van Rensselaer that the inventory – which John Jr. had not run past him before submitting – was wrong. Adams had paid for the billiard table and related items with his own money. But the Congressional report had been printed, and no public correction was issued.

Supporters of Andrew Jackson – Adams’ opponent in the 1824 and 1828 presidential elections – seized on the purchase as an opportunity to embarrass the President. Although billiards was a popular game in Europe (see Was Napoleon good at billiards?), it was less common in the United States and had an unsavory reputation.

The very term ‘billiards’ evoked an image of a secluded room where players and loungers wasted countless hours, smoking cigars, imbibing spirituous liquors, and wagering upon the fortunes of the game, all the while employing language and swapping stories that would have offended disapproving wives, sweethearts and mothers. Because the game was commonly associated with gambling, it was illegal in many states. (4)

In one of many disparaging editorials, Duff Green, editor of the United States Telegraph (Washington, DC), wrote:

It appears…that a portion of the public money has been expended in the purchase of a BILLIARD TABLE for the President’s House. The fact cannot be denied…if a refutation of the charge was at hand, the ‘authority presses’ would have given it along ago…. The sum expended, it is true, is not very large…. Yet the amount expended…does not remove the objection. I would ask seriously, what public good can possession of this table answer? Will it contribute to the dignity or usefulness of the Chief Magistrate of the nation? Will it raise him in the estimation of foreign Courts? Who wants, while on a visit to the President or at Congress to play at Billiards? Can it be that the President’s House is to be converted into a place of resort, where gamblers may idle away an hour? Is it right that the President, as the head and father of a moral, religious and money-saving people, should set such an example – should throw the weight of his character and situation on the side of games of hazard? Who can number the cases, in which young and old already justify their gambling practices by the example – at least by the Billiard table of the President? (5)

In fulfilment of Green’s prophecy, in November 1826 a jury in Vicksburg, Mississippi, refused to convict the owner of a public billiard table under a state anti-gambling law after the defence counsel argued his client had “as good a right to establish a billiard table as the President of the United States.” (6)

If the people tolerate the trifling expense of a billiard table, balls and chessmen, out of the public funds, what may they next expect? … a bill something like this:

… Next, we may have parks, stocked with deer, elk, buffalo, wild boars, &c. &c. that the President or his wife may take royal sport, ‘for the benefit of their health,’ and as ‘advised by their physicians,’ all at the expense of the people. (7)

After months of criticism, in response to which supporters of Adams made a weak and inconsistent defence, Representative James Clark of Kentucky wrote to Van Rensselaer on March 2, 1827, to clarify whether public funds had, in fact, been spent on the President’s billiard table. Van Rensselaer immediately replied:

[T]he committee on the public buildings, of which I was chairman at the late session, in the discharge of their duty, found it necessary to have an account or schedule of the furniture in the President’s house, obtained in virtue of a previous appropriation by Congress. We had no communication with the President on the subject; nor do I suppose that he had any knowledge, either of what we applied for, or what was furnished us. Our application was to his private Secretary, and the inventory or account, as handed to us by him, was annexed to our report without examination by us, and both the report and inventory were ordered to be printed, neither the one nor the other having been first read in the House, the reading having been dispensed with as is usual in cases of reports of committee.

Soon after the report and inventory had been printed, and some days before the discussion arose in the house on the report, I learned from the President that the inventory, so far as it related to the billiard table, &c. was entirely erroneous and that no part of the public appropriation had been or would be applied, to any such purpose. I regret that circumstances prevented me from making this explanation afterwards, when the conversation on the subject took place in the House; had I done so, it is probable so many remarks might not have been indulged in before the public. (8)

A vile example before the view of the nation

Van Rensselaer’s letter was published in the newspapers, but this did not put an end to the attacks.

Now, which shall we believe, Mr. Adams, who wishes to screen himself in the eyes of the nation, or his son, who had not motive to disguise the fact of the case?

Is it not probable that a part of the money was applied as stated by the son; that afterwards in consequence of the sentence of condemnation having been passed upon it by the voice of the nation, some subterfuge was resorted to with the view of clearing the President of the censure, that Mr. Adams told Gen. Van Rensselaer this story, to obtain the sanction of his name in support of a miserable apology in his favor, and then procured the application to be made for it through Mr. Clarke? To us, this appears to be highly probable; and we doubt whether any other face can be put upon it.

It is not, however, denied that the President keeps the gambling apparatus in his house; and it is here that the great mischief lies. The feelings of the people are violated, in having an example so vile set before the view of the nation. (10)

In what the Administration hoped would be the final word on the subject, Joseph Nourse, Register of the Treasury certified on June 21, 1827:

However, this still left Adams open to charges of being aristocratic in his tastes and activities, and of encouraging the vice of gambling. Visiting Washington in December 1827, British naval officer Basil Hall observed:

I had read so much in the public papers of the discussions in Congress about the extravagance of the President, in the outfit of this house, especially respecting the monstrous fact of his having ordered a billiard table as part of his furniture, that I looked sharply about for this dreadful engine of vice, which, innocent or insignificant as it may appear, was actually made to play a part in the great electioneering presidential question – which seemed to turn all men’s heads. I myself heard this billiard-table spoken of in Congress more than once, with perfect seriousness, as a sort of charge against Mr. Adams, who was then President. I may add, that this was only one of a thousand petty darts which were levelled at the same person; and which, though insignificant, taken separately, were like those that subdued Gulliver by no means to be despised when shot by multitudes. The following paragraph from a letter published in the papers, is a fair specimen of this Lilliputian warfare: ‘I cannot support John Q. Adams,’ says the writer, ‘because he has introduced a billiard-table into the President’s house, for the amusement of its inmates and visitors; thus holding out inducements to engage in a captivating vice – departing from plain republican manners – imitating the court etiquette of regal powers, and furnishing an example to the youth of our country, which, I conceive, can neither be too generally nor too severely reprehended.’

This appears ludicrous to us, and so I imagine it is considered by rational Americans. Even by many sensible men in that country, however, the doctrine of simplicity in manners, in connexion with refinements in sentiment and in taste, is very often, as I think, quite misunderstood. If these refinements be carried too far, they may certainly run into extravagance or affectation; but, on the other hand, it seems to be forgotten, that if the graceful and innocent pleasures of life be systematically and generally despised over any country; there will be some danger of the inhabitants falling into coarseness both of thought and action, the very opposite to real simplicity. (12)

The billiard table and the 1828 election

The issue of the billiard table contributed in a minor way to Adams’ defeat by Jackson in the 1828 Presidential election.

Its significance lay primarily in setting the overall tone of the Jacksonian campaign against the President. … Adams was accused not only of being extravagant in his use of public funds to furnish the White House, but also of waxing fat at the expense of the people throughout his public life. …

[T]he circumstances under which his billiard table was placed in the White House suggested to his opponents the sort of campaign that might be used successfully against him in that presidential canvass. Resentment by Adams’ followers of what they justifiably considered to be unwarranted abuse of the President prompted them to respond in kind by equally vicious personal attacks upon the private character of his opponents. Thus the President’s billiard table played a part in giving rise to ‘one of the most woeful’ political campaigns in American history. (13)

A Skeleton City: Visiting Washington DC in the 1820s

Can it be that the President’s House is to be converted into a place of resort, where gamblers may idle away an hour?