If you think of a particular European nationality, what stereotype comes to mind? For one British writer in 1822, it was “the mercurial Frenchman, the ignorant and sluggish Spaniard, the profligate Italian, and, perhaps, the enthusiastic and imagination-led German.” (1) Even relatively well-travelled statesmen held preconceptions about specific nationalities. Austrian Foreign Minister Clemens von Metternich wrote in 1824:

In Paris…they take everything lightly as if nothing were of importance; the wind blows everything away. In England things and people are under another moral law, and matters which have no value and no importance in Paris, have it in London. Italy possesses few men; there are, indeed, some literary men who are dull and heavy there, as everywhere else, in spite of the innate frivolity of their national character. In Germany everything tends to ideology, and a deep sleep lies on everything else. (2)

Below are some of the national stereotypes found in the writings of early 19th-century travellers. 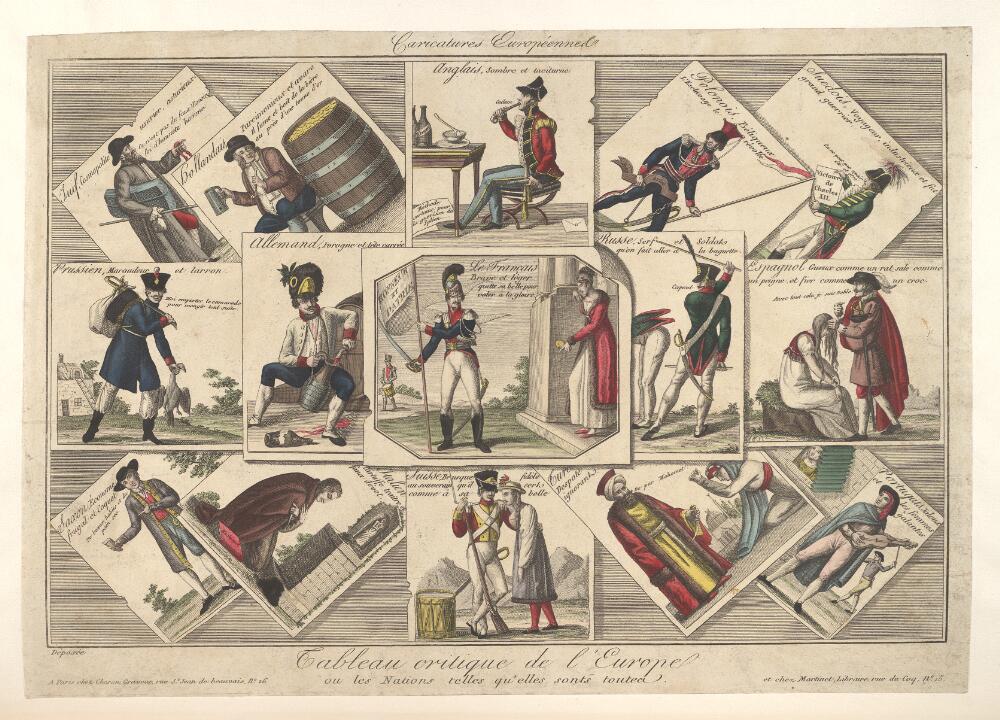 [In Austria] a surly-looking fellow demanded our passports, which, having read, he said, ‘You cannot be Americans; they are all black, and cannot speak German.’ (3)

The Englishman is certainly not the most sociable being among strangers, whose conversation he rather shuns than provokes. He feels it almost an insult to become the butt of conjecture to those around, and to be subjected to their awkward attempts to satisfy ill-concealed or more open curiosity; while he considers it little worth his while to inquire about the professions, business, persons and opinions of others. Hence a general remark on the state of the weather or the latest news, and he is at the end of his tether. (5)

I will not say, as I have frequently heard it remarked by others, that the love of pleasure and amusement is the engrossing, all-absorbing passion of the French, that the pure principles of religion exercise no influence over their actions, or that the tranquil enjoyments of domestic life are totally unknown to them; for this I do not believe, having myself met with instances sufficient to prove the contrary to my own satisfaction; but it is evident to the slightest observation that the love of pleasure is carried to far greater excess in France, that religion exercises less influence there, and that the marriage tie is much more frequently a mere matter of expediency between parents, without reference to the wishes or feelings of the parties most interested, than in America.

That the French surpass every other people in point of politeness, is an opinion very generally entertained by all the world. … [T]he superiority of politeness is rather in manners, than in feeling. A Frenchman will be more obsequious, more polite, undoubtedly, in manner; but I have not found that he is particularly ready to make a sacrifice of his own personal convenience to that of his neighbour. (6)

The German…has a kind of restless curiosity and desire to communicate and to learn, and such a droll kind of half-cunning simplicity all the while, in managing his advances, that I have often been at a loss to know whether it would be proper to show solemn indignation or undisguised glee at the singular compound of impudence and simplicity, assurance and politeness, which distinguishes the thorough-bred German, in pursuance of his wish to satisfy curiosity. (7)

In Italy they are licentious and irreligious…. Any one might be king of the Italians who would supply them plentifully with puppet-shows and quack doctors. (8)

2 commments on “National Stereotypes in the Early 19th Century”

A surly-looking fellow demanded our passports, which, having read, he said, ‘You cannot be Americans; they are all black, and cannot speak German.’