In Napoleon in America, when Marie Laveau casts her healing spell on Napoleon, he says, “She has let me dream at ease.” Though some might say that Napoleon dreamed of European conquest, the French Emperor’s actual dreams, as reported by his companions, were less grandiose. 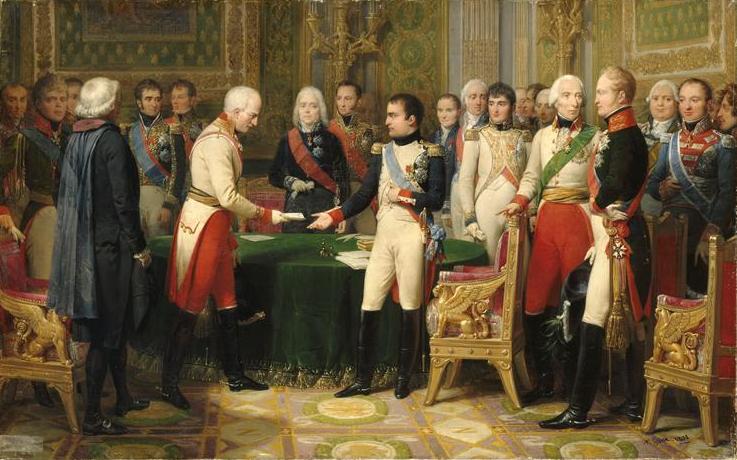 The Interview at Erfurt, by Nicolas Grosse. Tsar Alexander (in black jacket and white pants) is standing on the right.

Napoleon’s valet Constant recounted the following episode, which he says happened after Napoleon and Russian Tsar Alexander I watched a presentation of Voltaire’s play Oedipus in the German city of Erfurt in October 1808. During the performance, Alexander presented his hand in friendship to Napoleon.

That evening I assisted the Emperor to bed as usual. All the doors leading into his chamber were carefully closed, as well as the shutters and windows. Hence no one could approach His Majesty except through the salon where I slept with Roustan. A sentry was stationed at the foot of the staircase. I always went to sleep very tranquilly, sure that nothing could happen to Napoleon without awakening me.

About two o’clock that morning, when I was sleeping very profoundly, a strange noise suddenly awakened me. I rubbed my eyes, listened with the closest attention, and hearing absolutely nothing, I concluded that I had been dreaming, and was getting ready to go asleep again, when my ears caught the sound of muffled and plaintive cries such as might be uttered by a man who was being strangled. I heard them twice. I was sitting up, motionless, my hair standing up on my head, and my limbs bathed in a cold perspiration. Suddenly it occurred to me that they were assassinating the Emperor. I sprang out of bed and woke Roustan. . . .

The cries began anew with alarming force. Thereupon I opened the door with all the precautions that my trouble permitted me to take, and entered the bedchamber. A hasty glance convinced me that no one had come in.

Advancing toward the bed, I perceived His Majesty stretched across it in a convulsive attitude, his sheets and coverlets tossed to one side, and his entire person in a frightful state of nervous contraction. Inarticulate cries were escaping from his half-open mouth, his chest seemed greatly oppressed, and one of his tightly closed hands lay on the pit of his stomach. It frightened me to look at him. I called him and he did not answer; I called him again, and yet again . . . the same silence. At last I gave him a gentle push. This roused the Emperor and he awoke with a loud cry, and saying: ‘What is it? What is it?’ Then he sat up and opened his eyes wide.

I made haste to tell him that, seeing him tormented by a horrible nightmare, I had ventured to waken him. ‘And you did well, my dear Constant,’ interrupted His Majesty. ‘Ah! my friend, what a frightful dream! A bear tore open my breast and was devouring my heart!’ Thereupon the Emperor got up, and while I was remaking his bed, he walked about the room. He was obliged to change his shirt, for that he had on was all wet with perspiration. At last he lay down again.

He told me the next morning on awaking, that he had had all the trouble in the world to go to sleep again, so vivid and terrible had been the impression he had experienced. He was haunted for a long time by the memory of this dream. He often spoke of it, trying each time to draw different conclusions from it, to compare its circumstances. I was struck, for my own part, by the coincidence between Alexander’s compliment at the play and this frightful nightmare, all the more because the Emperor was by no means subject to nocturnal disturbances of this sort. I do not know whether His Majesty related his dream to the Emperor of Russia. (1)

Count de Las Cases left the following account of a dream Napoleon had in October 1816, during his exile on St. Helena.

After dinner [Napoleon] mentioned a dream which he had had during the night. A lady with whom he had been but little acquainted (Madame Clarke, Duchess de Feltre appeared to him in his dream, and told him she was dead, at the same time adding several observations which were expressed in language perfectly connected and intelligible. ‘Every thing was so clear and distinct,’ said the Emperor, ‘that it has made a forcible impression on me; so much so that if I were really to hear of the death of the Duchess de Feltre, I must confess that my established ideas would be shaken; and perhaps,’ said he, smiling and looking at one of the company,’ I too should become a believer in dreams and apparitions.’ (2)

There was no danger of that, since the Duchess de Feltre did not die until 1842, 21 years after Napoleon expired.

While he was in exile, Napoleon also reportedly had a vivid dream of his second wife, Marie Louise.

She looked as young as she was when I saw her at Compiegne.  I took her in my arms but try as hard as I could to hold her tight, I felt her slipping away from me, and when I tried to embrace her again, everything had disappeared and I woke up. (3)

Interpreting dreams in the 19th century

The ancients regarded dreams as flights of the soul, or messages sent by gods or demons. By the late 18th century, people were starting to attribute dreams to more earthly circumstances, including disturbances of the body. In 1786, Benjamin Franklin wrote that “the art of procuring pleasant dreams” lay in preserving good health, having a supply of fresh air in the bedroom, and maintaining a good conscience, “for when the body is uneasy, the mind will be disturbed by it, and disagreeable ideas of various kinds will, in sleep, be the natural consequences.” (4)

In the first half of the 19th century, scientific explanations of dreams competed with theological accounts and everyday superstitions. Newspapers regularly presented reports of dreams that accurately foretold disasters, such as drownings and murders. Dream books, which provided an A to Z guide to dream interpretation, were popular. Here is a sample from the “C”s.

COAL-PIT – To dream you are in a coal-pit foretells that you will shortly lead a widow to the hymeneal altar – to a maid it denotes a speedy marriage with her sweetheart who will become rich and rise to honors in the state – to the trader, it indicates that he will shortly be tricked out of a quantity of goods.

COMETS – To dream you see one of these extraordinary, aethereal substances is ominous of war, plague, famine, and death – to the lover, it forebodes an entire frustration of his hopes – to the farmer, failure of crops and to the seamen, storms and shipwrecks – after such a dream, change, if possible, your present place of residence.

CORN – To dream you see fields of corn, or that you are among unthrashed corn, is a very favourable omen it denotes success in business – to the lover it announces that your sweetheart is kind, of an amiable disposition, that you will marry, have many children, and become rich and happy.

CRANES – To dream you see [a] flock of these birds is very ominous, it foretells misfortune and disputes – expect thieves to attack your house – your servants to rob you – your friends to turn against you – and your enemies to gain advantage over you – if you are in love, your sweetheart will betray you: in short, such a dream is the fore-runner of evil, and I would advise the dreamer to change his quarters as soon as possible, for depend no good will attend him in his present situation. (5)

A more helpful guide to dream interpretation appeared in an Indiana newspaper.

To dream, and to remember your dream, is a forerunner that you were not awake, nor very sound asleep, when you dreamed.

To tell your dreams prognosticates that you might be better employed.

For a young lady to dream very particularly of any certain young gentleman foretells that she purchased her last hat to attract his attention.

To dream of happiness shows that you will probably be disappointed when you awake. (6)

My ears caught the sound of muffled and plaintive cries such as might be uttered by a man who was being strangled.