There were five candidates in the United States presidential election of 1824, which was held to determine the successor to President James Monroe. Three of the candidates – Secretary of State John Quincy Adams, Secretary of War John C. Calhoun and Henry Clay, the Speaker of the House of Representatives – appear in Napoleon in America. The other two candidates were General Andrew Jackson and Secretary of the Treasury William H. Crawford. Since the Federalist Party had ceased to exist, all of them were members of the Republican Party, which split into factions behind the candidates. 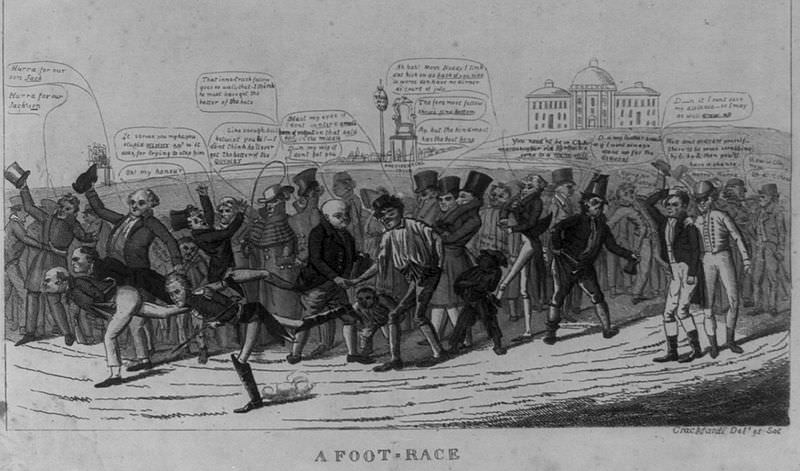 A Foot-Race. Caricature of the Presidential election of 1824 by David Claypoole Johnston. Cheering citizens watch as John Quincy Adams, William Crawford and Andrew Jackson stride toward the finish. Henry Clay stands on the far right, hand on head, saying, “D–n it I cant save my distance – so I may as well ‘draw up.’”

Campaigning played a greater role than it had in previous elections.

Electioneering, unknown in the earlier days, grew rapidly in vogue during the period following 1819. Stump speaking came to be an art, and cajolery a profession, while whiskey flowed freely at the hustings. The politicians could most easily attain their objectives by appealing to the prejudices of the masses…the ignorant were asked to elect the ignorant because enlightenment and intelligence were not democratic. (1)

Although there were differences among the candidates on issues such as the tariff, internal improvements and slavery, the election was also a personality contest.

The bitterest charges and counter-charges were made by the partisans of all the candidates. Adams was accused of a whole category of sins, ranging from slavery-hating to slovenliness. The Crawfordites attacked Calhoun’s record as Secretary of War and sought to drive him in disgrace from public life, while the latter’s followers retorted in kind upon the Secretary of the Treasury. Jackson was branded a tyrant, a sinister figure, full of unbridled passions. Clay was denounced in the most violent manner. (2)

More charitably, a newspaper article summed up the candidates’ qualities as follows.

Andrew Jackson. An early and even precocious pupil of the school of 76 – at the age of 15, a soldier of liberty by inclination – at a mature age a civilian by habit. It is a remarkable fact, not sufficiently known, that he was from youth to maturity the most industrious student of practical knowledge that our age has produced. The distinguished traits of his character are quickness of perception, (perhaps quickness of temper also) rapid ratiocination; decision of purpose; indefatigable perseverance; and generosity, even to the point of chivalry; courage and integrity we need not infer; they grow spontaneously in such a soil.

John Quincy Adams. A politician by education, who grasped the diplomatic quill as private secretary to a foreign embassy, at about the same age that Jackson shouldered his musket – a man of inherent talent for business, of great acquirements, of undoubted patriotism, but of cynical irascibility, which the court discipline of forty years has not quite subdued. He is a good theorist on the subject of ‘Etiquette,’ but the most indifferent man in the world as to the practice. He is neither so good as friends, nor so bad as his enemies, would make him appear. His faults will be remembered and exaggerated of course; but it is our duty not to forget his merits.

Henry Clay. One of our choice spirits – an integer, and no trifling one, in our sum of talent. He is one of the striking instances of the versatility of character peculiar to our nation, and one of the strongest securities of the moral force which binds our confederacy. Ardent, eloquent, and sagacious; assiduous or convivial, according to circumstances – with great practical knowledge of social life, and the most glowing affection to the cause of universal freedom. No man can gather up the robe of dignity with more readiness, or relax it with more grade.

John C. Calhoun. Modestly, but conspicuously in the background of the group. He could not, if he would, be otherwise than conspicuous. In the darkest corner his intrinsic light, like that of the diamond, would lead the eye towards him. At the age of 22, he could shine equally in the drawing room, in the library, or in a consultation among the veterans of science. He, if his life is spared, will be one of our Presidents. He combines in his character the fire and zeal of Patrick Henry, with the calm and innate virtues of Jefferson.

William H. Crawford. A man raised from the ground by the warmth of the most laudable ambition, actuating great industry; but consumed at his medium height by excess of the very same heat that caused his buoyancy. We have nothing to do with the gnawing of conscience which are supposed by some to predict future debility, further than to admit the probability of such an effect, in such a case, upon a nervous system with such a temperament. If he should ever be President of the United States, his ability will be competent to the office in times of tranquility; and his temper, we hope, chastened by the severe animadversions which his mistaken friends have wrung from those who were willing to love and respect him. (3)

Unable to gain enough support, Calhoun withdrew from the presidential race before the election. He stood for vice president instead. Though Crawford suffered a paralytic stroke in 1823, he remained a presidential candidate (his backers tried to prevent knowledge of his condition from becoming widespread). In general, Adams was supported by the Northeast section of the country; Jackson by the South, West and mid-Atlantic; Clay by parts of the West; and Crawford by parts of the East.

Voting was held from October 26 to December 2, 1824. Voter turnout was low. Jackson received 99 electoral votes. He benefited from the three-fifths rule, which enhanced a state’s voting power if it held slaves, even though slaves could not vote. Adams received 84 electoral votes, Crawford received 41 and Clay got 37. As no candidate reached the 131 vote majority necessary to win the election, the names of the top three candidates were submitted to the House of Representatives, in accordance with the 12th Amendment to the Constitution. Clay – the Speaker – threw his support behind Adams. Thus, on February 9, 1825, the House elected John Quincy Adams as president with the support of 13 states. Seven states supported Jackson and 4 supported Crawford. Adams made Clay Secretary of State in the new administration. Clay was accused of making a “corrupt bargain” with Adams. Both men denied the charge. Adams was inaugurated on March 4, 1825 (see my post on the inauguration).

After the Congressional election in Maryland, which was held on October 4, just before the presidential election of 1824, Hezekiah Niles editorialized:

On Monday…all was dissension and confusion, for parties, in respect to most of the candidates, were very nearly balanced, and our people are not of those who electioneer ‘by halves;’ and when so many points of collision were offered, it is perhaps to the credit of our people that so few acts of personal violence were committed, though there were enough of them in several of the wards. But the returns from the ballot boxes have settled us down and we are all at peace; the inns very much pleased and the outs more or less mortified at the results; which, in some cases, were not to have been at all expected. However, so it is – and we all feel that it is better to decide our differences of opinion by an appeal to the ballot than an appeal to the sword.

But the ‘fruit of liberty’ is this – we that were so ardently contending one against the other only four days ago, and doing all that we could to defeat and confound one another are now all agreed! La Fayette has come [on his tour of the United States], and every heart is delighted; and as if one man possessed every heart in Baltimore, it is tendered to him, warm and unalloyed by recollections of late differences – manifesting the glorious truth, that opposing opinions may not rest on opposing principles, and that persons may equally love their country and its benefactors, no matter what individuals they support at the polls; a state of things that cannot exist in any other than a free and enlightened nation, in which each man jealous of his own rights, is willing to yield an exercise of the same rights to his fellow. This is the purity of the republican system, the safety of the state, the pride of its citizens – and should be cherished as the life’s blood of all liberal institutions. (4)

6 commments on “The Presidential Election of 1824”

The politicians could most easily attain their objectives by appealing to the prejudices of the masses…the ignorant were asked to elect the ignorant because enlightenment and intelligence were not democratic.