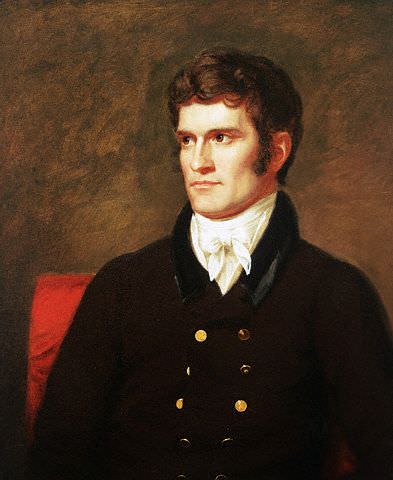 John C. Calhoun, a South Carolina planter and politician who never doubted the necessity of slavery, has often been judged harshly. TIME put him on the list of the worst vice presidents in America’s history. Calhoun’s career was long, complex and accomplished. He served in the House of Representatives (1811-1817) and the Senate (1832-1843, 1845-1850). He was also secretary of war (1817-1825), secretary of state (1844-45), and vice president (1825-1832). Calhoun was a vigorous promoter of states’ rights and a strong advocate for the South. In Napoleon in America, he appears as the US Secretary of War, with a hawkish interest in Napoleon’s activities.

Voice of the South

John Caldwell Calhoun was born near Abbeville, South Carolina on March 18, 1782. He was the fourth child of Scots-Irish immigrant Patrick Calhoun and his second wife Martha Caldwell. His parents and a beloved sister died when he was an adolescent. Raised in the South Carolina backwoods, Calhoun learned how to cultivate cotton and other crops. He remained a planter throughout his life.

At the age of 20, John C. Calhoun entered Yale, where he studied law. He married his cousin, Floride. They went on to have ten children, seven of whom lived to adulthood. Calhoun was a caring family man, though his wife and offspring were frequent sources of concern. In 1810, Calhoun was elected to the House of Representatives. Virginia Congressman John Randolph coined the term “war hawk” to describe Calhoun, Henry Clay and a number of other young Southerners and Westerners who joined Congress at the time. They were hostile to Britain and resentful of the Royal Navy’s interference in American shipping. They accused Britain of encouraging Indian attacks on the American frontier. The war hawks drew the United States into the War of 1812.

When President James Monroe appointed John C. Calhoun as Secretary of War in December 1817, the United States Army numbered some 8,000 men. They were responsible for defending an area of almost 2 million square miles. Morale was bad, pay was low, and discipline was harsh. There was no chief of staff, no centralized headquarters and no chain of command, except through the war secretary. The acquisition of uniforms, rations, powder and shot was contracted out as needed by individual supply officers. This meant dependence on local suppliers who charged monopoly prices for goods of poor quality. There was considerable anti-military sentiment among the American public.

Calhoun centralized staff responsibilities in Washington. He established a surgeon general, a judge advocate general and a quartermaster general. Rations and supplies were purchased in bulk and stored at depots and arsenals throughout the country. Calhoun improved coastal defences and defence of the frontier. He also pushed for government funding of military education for poor, but ambitious young men.

Rich men, being already at the top of the ladder, have no further motive to climb. It is that class of the community who find it necessary to strive for elevation, that furnishes you with officers. (1)

Calhoun transformed the Military Academy at West Point from a run-down army outpost into a national centre for military education. He supported the American career of French General Simon Bernard, and promoted US Army adoption of the Treatise on Artillery written by General Henri Lallemand.

Calhoun was keen on improvements to communications and transportation.

We occupy a surface prodigiously great in proportion to our numbers. The common strength is brought to bear with great difficulty on the point that may be menaced by an enemy…. Good roads and canals, judiciously laid out, are the proper remedy. In the recent war, how much did we suffer for the want of them! (2)

Calhoun urged Congress to fund a standing army, instead of relying on untrained militia augmented during war. His ultimate objective was an army with a core of professionally trained, well-paid officers. In peacetime, they could plan and man a set of coastal and frontier fortifications. They could also help construct the network of roads and waterways needed for defense and national growth.

As war secretary, Calhoun was also responsible for the management of Indian affairs. In 1824, he unilaterally created the Bureau of Indian Affairs. Calhoun personally supervised the negotiation and ratification of 38 treaties with Indian tribes. Later in his career, he became an outspoken advocate of the US annexation of Texas, which gained independence from Mexico in 1836.

John C. Calhoun perpetually wanted to become president, but the office remained out of his grasp. Instead he became vice president in the administration of John Quincy Adams. In 1828, Calhoun was re-elected to that office, serving under President Andrew Jackson, with whom he had a falling out in the “Petticoat Affair,” also known as the Peggy Eaton Affair. That episode is well described on Feather Schwartz Foster’s Presidential History Blog. Mr. Calhoun, the cast-iron man, who looks as if he had never been born and never could be extinguished, would come in sometimes to keep our understandings upon a painful stretch for a short while, and leave us to take to pieces his close, rapid, theoretical, illustrated talk, and see what we could make of it.… He meets men, and harangues them by the fireside as in the Senate; he is wrought like a piece of machinery, set a going vehemently by a weight, and stops while you answer; he either passes by what you say, or twists it into a suitability with what is in his head, and begins to lecture again…. Relaxation is no longer in the power of his will. I never saw any one who so completely gave me the idea of possession…. His moments of softness in his family, and when recurring to old college days, are hailed by all as a relief to the vehement working of the intellectual machine; a relief equally to himself and others. (3)

The champion of Free Trade; a Slaveholder and Cotton Planter; the vindicator of State Rights, and yet a firm believer in the indestructibility of the Federal Union; now the advocate of war, and now of peace; now claimed as a Whig; now revered as a Democrat; now branded as a Traitor; now worshipped as a Patriot; now assailed as a Demon; now invoked as a Demi-god; now withstanding Power; and how the people; now proudly accepting office, now as proudly spurning it; now goading the Administration, now resisting it; now counselling, now defying the Executive; … [H]is country has been his sole engrossing passion…he has never wasted time; each moment has been and is employed in usefulness. (4)

Posterity decided against him

John C. Calhoun died of tuberculosis in Washington on March 31, 1850, at the age of 68. His last words were, “I am very comfortable” (see my post about last words of famous people). He was buried in St. Philip’s churchyard in Charleston, South Carolina. His copious writings – The Papers of John C. Calhoun, edited by Robert L. Meriwether and Clyde N. Wilson (Columbia: University of South Carolina Press) – span 28 thick volumes. They are worth looking at if you are interested in United States history in the first half of the 19th century, the political thought of the period, and daily life in the South and in Washington. Delve into any of the volumes and you will be drawn into Calhoun’s thought process, his political machinations and his domestic activities. He can be refreshingly candid. For example, writing to James Henry Hammond on January 25, 1840, Calhoun says:

You must not suppose, in taking the course I have, that I am governed by confidence in the men or party with which we are acting…. My reliance is on the power, which circumstances has [sic] placed in our control, and to maintain it, the most potent means is to keep the government poor. An exhausted treasury is the most effective remedy for the deep seated disease, which has so long afflicted the body politick, and to it we owe whatever symptoms there are of returning health. With a full treasury, the Democratick [sic] party ever will become, as it lately was, a spoil party; but empty the treasury, and withhold the means of rewarding partisan services, and you force them to return to principles…. Very different is the case with the opposite party. They are and ever have been incorrigibly wrong from the begin[nin]g. Individually it is highly respectable for the most part, but as a party, we can hope for nothing from it, unless indeed a long continued exclusion from power, should reform it. As yet, it has had but little influence that way. (5)

The many letters to and from Calhoun’s family give a softer picture of the man. To his son Patrick, then a cadet at West Point, Calhoun wrote on August 4, 1838:

Your sister, I suppose, gave you all the incidents of our journey home. The weather was very warm and we had the accident of the stage turning over at the very commencement of our journey, but which was in other respects free from any mishap. On our arrival home, we had the pleasure of finding all well, with a good crop. Since our return, there has been several weeks of very warm & dry weather, which has burnt the corn crop, but still the prospect is good. The cotton was but little burnt and looks very well.

Since our return home your Uncle William, & Uncle James Ed accompanied by Floride Noble & Sarah, your uncle William’s daughter, made us a visit. Your two uncles have returned, but left the two young ladies with us, so that we have a house full, with much cheerful company. Your Uncle William is not in good health, and looks a good deal broken. Your uncle James looks well, and brought up with him, in his wagon, a splendid Piano, as a present to your sister. The boys are all going to school to Mr. Weyland. They are doing well. The melon crop has failed in a great measure, but there will be an abundant crop of grapes & peaches, and we only wish you were here with us to enjoy them with the rest of the family. (6)

John C. Calhoun’s most important constitutional and political writings are available at the Online Library of Liberty. Two good biographies are John C. Calhoun and the Price of Union, by John Niven (1988) and John C. Calhoun: A Biography, by Irving H. Bartlett (1993). For more about Calhoun’s family life, see Ernest McPherson Lander, Jr., The Calhoun Family and Thomas Green Clemson: The Decline of a Southern Patriarchy (1983). Irving Bartlett concludes:

Posterity decided against Calhoun’s argument for the indefinite protection of slavery more than 130 years ago. What he had to say about the need in popular governments like our own to protect the rights of minorities, about the importance of choosing leaders with character, talent, and the willingness to speak hard truths to the people, and about the enduring need, in a vast and various country like our own, for the people themselves to develop and sustain both the civic culture and the institutional structures which contribute to their lasting interest is as fresh and significant today as it was in 1850. (7)

When People Knew How to Speak: Oratory in the 19th Century

Mr. Calhoun, the cast-iron man, who looks as if he had never been born and never could be extinguished, would come in sometimes to keep our understandings upon a painful stretch for a short while, and leave us to take to pieces his close, rapid, theoretical, illustrated talk, and see what we could make of it.