When one imagines a party in London during the Regency era – like the soiree at which the Duke of Wellington learns of Napoleon’s escape in Napoleon in America – one tends to think of lavish rooms, pretty gowns, and fancy dancing. Less thought is given to the work the hostess had to do to get her house ready for the party. This was considerable, even if she did have servants to help her. 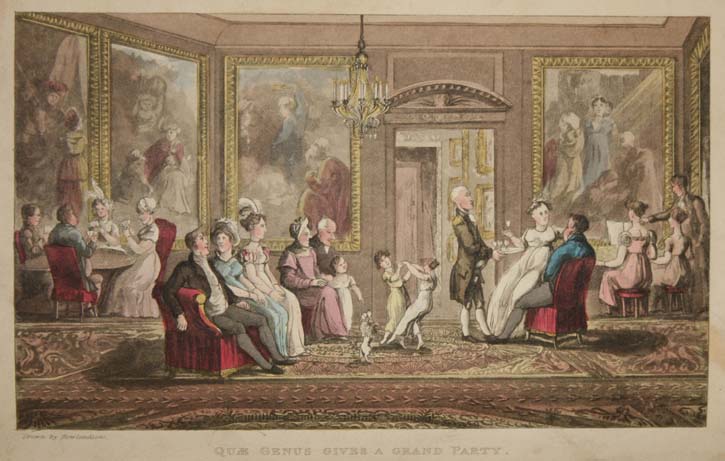 Regency evening parties came in various guises, which “differ[ed] from each other rather in the amusements than in the manner of conducting them.”

They consist of balls, at which…dancing alone is the amusement: – routs, which comprehend a crowd of persons in full dress assembled to pay their respects to the lady of the house, and to converse, occasionally, with such of their acquaintance as they may chance to encounter in the throng; – conversaziones, in which, as the term implies, conversation has the lead, but the tedium which this might occasion to some of the guests, by its unvaried continuance, is prevented by the occasional introduction of music and dancing: and card parties, which should be composed solely of those who take an interest in the only amusement they afford. (1)

Regardless of the type of party, a lot had to be done to get the house ready.

Early in the day, the sofas, chairs, and tables should be removed, as well as every other piece of furniture which is likely either to be in the way or to be injured: forms [benches] should be placed around the walls of the room, as occupying less space than chairs, and accommodating more persons with seats. A ball room should be brilliantly lighted, and this is done in the best style by a chandelier suspended from the centre of the ceiling, which besides adds much to the elegant appearance of the room. Lustres placed on the mantelpiece, and branches on tripods in the corners of the room, are also extremely ornamental. (2)

If there was going to be dancing, the carpet had to be removed and (ideally) the floor decorated with a design in chalk. This prevented people from slipping; it also disguised an old or ill-coloured floor. The house had to be decorated with plants and flowers; music had to be arranged; a “retiring room” put in readiness “for ladies who may wish to disburthen themselves of shawls and cloaks.” Refreshments had to be prepared, including – in the case of a ball – a supper, “to be announced at half-past twelve or at one o’clock, never later.” Dinner parties had their own separate requirements. If conversation was the focus of the party, “the tables should be spread with the newest publications, prints, and drawings: shells, fossils, and other natural productions should also be introduced to excite attention and promote remark.” If games were to be played, tables had to be furnished with cards and counters. (3)

Lady Morgan provides a peek at what went on in one London house just before a big Regency party.

It is no joke [to give a party] even in London, where every thing is to be hired, from the chairs to the company; where ‘society to let,’ has been a sign set up by more than one leader of ton, ready to fill the house of any Mrs. Thompson, or Mrs. Johnson, upon the understood terms of no meddling on the part of the hostess, and no obligation to make a due return on the part of the guests. What is strange in all this toil of pleasure is that not only the good sort of people have a great deal to do, in getting up a party, but that the great themselves (such of the great as do not live in the ‘houses’ modelled on a French hotel), have nearly as much trouble to make ‘ample room and verge enough’ to suffocate their friends commodiously, as the twaddles in Bloomsbury, the tabbies of Finsbury, or the dwellers in any other terra-incognita of Mr. Croker’s topographical map of fashion.

I once caught a certain ‘bonnie duchess’ up to her eyes in lamps and loungers, garlands and wax lights, and the rest of the materiel for a party, an hour before the throwing open of her rooms to that ‘world,’ which her talent and pleasantry so long governed and cheered. As I was a Missy, her good-natured grace had bid me come very early, that she might see how I was dressed: for she took a kind interest in me, for no other reason that I know of, except that I stood in need of it. Early, therefore, I went, but so early, that all the behind-the-scenes bustle was still in its fullest activity.

The Duchess of — then resided in Lord A—st’s house, which afforded quarters much too circumscribed to hold her legions of fashion; and all her ingenuity was applied in order to make crushing room for five hundred particular friends. What a hurry-scurry! Footmen, still in their jackets, running about with lights to place and replace, like the clerical scene shifters in Santa Maria Maggiore at Rome, on a Christmas eve, – the porter, half-liveried, the page half bedizened, and the French femme-de-chambre, with her hands in the pocket of her silk apron, chattering to every body, and helping nobody!

All this was very striking, but very comfortless; so I sauntered out of one room into another, and had just drawn near to the only fire I met with in the suite, when a loud hammering behind me induced me to look back; and there, mounted on a step-ladder, stood a bulky, elderly lady, in a dimity wrapper, and a round-eared cap, knocking up a garland of laurel over the picture of some great captain of that day, military or political (I forget which), while an argand lamp burned brightly before it, – a votive offering to the idol of the moment!

As I took the elderly lady for a housekeeper, I asked her if the duchess was still in her dressing-room? ‘No child,’ said the elderly lady, ‘the duchess is here, telle que vous la voyez, doing that which she can get none of her awkward squad to do for her:’ and down sprang the active lady of seventy, with a deep inspiration of fatigue, ejaculating, ‘Gude God, but this pleasure is a toilsome thing.’

So saying, she bustled off, and in less time than could be imagined, re-appeared in the brightest spirits and the brightest diamonds, – I had almost said the brightest looks that illumined her own brilliant circle. Hers was what Horace Walpole calls ‘the true huckaback of human nature;’ and to the last it showed the strength and beauty of the web. (4)

According to Lady Morgan, the party turned into “one of the most agreeable” she ever attended. But if a party didn’t turn out as well as one hoped, there was apparently no need to worry.

Few expect any gratification from the rout itself; but the whole pleasure consists in the anticipation of the following days’ gossip, which the faintings, tearing of dresses, and elbowings which have occurred, are likely to afford. (5)

6 commments on “How to Throw a Party in Regency London”

I once caught a certain ‘bonnie duchess’ up to her eyes in lamps and loungers, garlands and wax lights, and the rest of the materiel for a party, an hour before the throwing open of her rooms to that ‘world,’ which her talent and pleasantry so long governed and cheered.