In 1818, future first lady Louisa Adams wrote to her father-in-law, John Adams: “How much practice…is required to receive company well, and how much the greatest talents are obscured by that want of ease and small talk which, though in itself trifling, always produces the happy effect of socializing a company and by insensible degrees warming it into brilliancy and solidity. This is one of those arts that everybody feels, but few understand, and is altogether inexplicable.” (1) 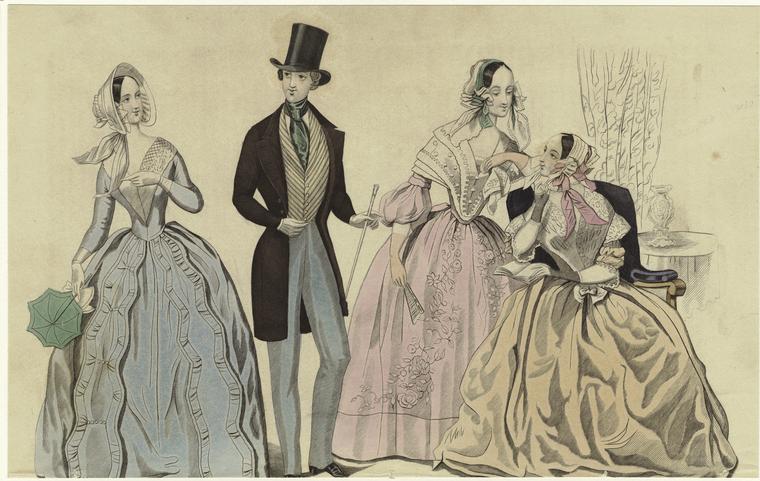 Louisa believed the ability to make small talk was so important that, four years later, in a letter to her husband, John Quincy Adams, she listed it as the first ingredient in her recipe for a successful presidential candidate.

Take a good deal of small talk; a very little light literature; just sufficient attention to dress to avoid the appellation of a dandy: a considerable affectation of social affability; with as much suavity as will induce the fawners who surround him to fancy they rule him; a fine house, a showy carriage, and a tavern kind of keeping establishment; and you have the man whose popularity will carry everything before him. (2)

As Louisa knew, small talk does not always come naturally. Here’s a guide to how it was done in the early 19th century.

What is small talk?

The Earl of Chesterfield referred to small talk as “a sort of chit-chat…which is the general run of conversation at courts, and in most mixed companies. It is a sort of middling conversation, neither silly nor edifying; but, however, very necessary for you to be a master of.” (3) A later, unnamed writer described it as “a rattling, gay, meaningless kind of conversation, …ability in which is necessary to everyone who converses with the fair sex.” (4) He was not the only person to assume that women liked small talk more than men did. A 19th-century American etiquette manual advised young men to be “always furnished with that sort of small talk which usually contributes most to [ladies’] amusement.” (5) On the other hand, a guidebook for women advised those interested in “retaining the esteem of a husband” to broaden their conversational horizons.

It is true that there is an abundance of those subjects which form the topic of what is, aptly enough, called ‘small talk,’ upon which it is impossible to go wrong. Where sheer nonsense is the subject of discourse, there is little room, and as little necessity, for dignified language, deep observation, or shrewd remark. But…it is seldom indeed that small talk is either opportune or allowable; and therefore, in laying down rules for conversing well, we leave such mere trifling entirely out of the question. (6) 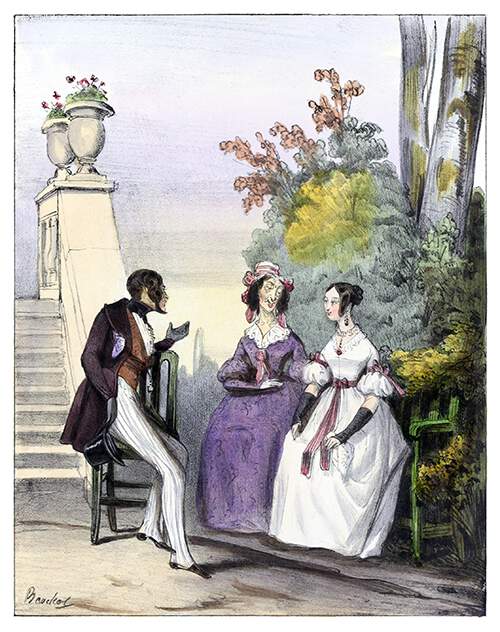 Writing in 1823, an Englishman helpfully offered some examples of small talk.

The materials out of which it is formed are few in number, and easily accessible. … The weather, the health of your friends, the funds, any accidents which have happened to any of your acquaintances, such as deaths or marriages, the King, Bonaparte, Lord Byron, the cheapness of meat, any watering-place, the corn-bill, the author of Waverly, and the theatre.…

Thus, in a morning call, if two strangers happen to be left together, how agreeably they may pass the time in enlarging upon the above topics. ‘A very hot day, Sir!’ ‘Yes, indeed, Sir; my thermometer stood 80 in the shade. Pray, Sir, are you related to the Rev. Jeremiah Jollison? I hope he is well.’ ‘I am his brother, Sir: he died two years ago.’ ‘God bless me! but it’s more than two years since I saw him. Pray, Sir, what do you think of Spanish bonds?’ &c. Such is the conversation you generally hear after dinner (before dinner there is none) in stage-coaches, at hotels, and at watering-places. It is most suitable for adults.

The grand difficulty in this kind of small-talk is to discover any subject; for as…the mind cannot…call up any subject it pleases, the dialogue must necessarily depend on the power of association in the brain of the individuals who maintain it. It requires great presence of mind to call up a sufficient number of topics to meet a sudden emergency. Thus, when you meet a friend in the street, who, in spite of your attempts to pass him with a nod, will stop and speak to you, how awkward it is to have nothing to say! This happens to me continually. When you have shaken hands, and the one has said, ‘A fine day,’ and the other, ‘Yes, very,’ you stand for a few moments gazing with a vacant sort of look upon one another, shake hands again, and part. The same accident sometimes happens in morning calls. After having exhausted all the common-places of civility, it is in vain you attempt to think of some subject of discourse; the longer you search, the further you are from it; except the conviction that you can find nothing to talk about, your mind is a tabula rasa. Your guest at last rises, and puts you out of your agony.

There are some people, however, who have a genius for small-talk. Their stock seems boundless. It is no matter where, or with whom, or upon what, they are talking; still it flows on and on…. It is a great infliction to be the only person in company with these inveterate small-talkers. Their discourse makes one’s head ache. It is like the perpetual dropping of water upon the crown of one’s pericranium. To me, however, such people, if their conversation is not addressed to me, are a great relief. They save me the trouble of attempting to talk, and the mortification of a failure. (7)

In praise of small talk 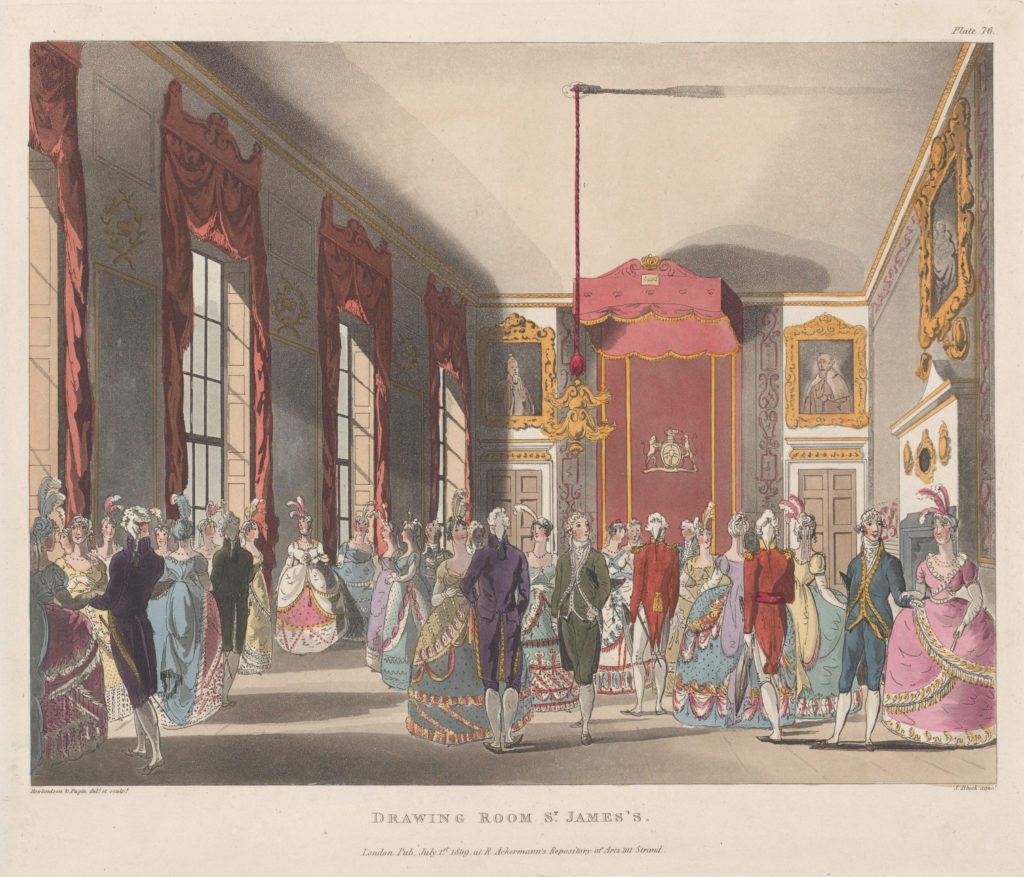 Although the above writer paid small talkers a barbed compliment, others offered more fulsome praise.

There seems to be a great deal of wisdom in speaking contemptuously of common-place talk; but it is all seeming. … If a man of great learning be an agreeable man, it is not his learning that makes him so, but his dexterity in managing it. If he be above small talk, he may, for nine-tenths of the world, keep his learning to himself. It is an admirable conceit for profound critics in the ancient languages of Greece and Rome to spend years upon settling the reading of an old song, and write volumes upon a cadence, and bury themselves in dust till their souls are as dry as a stuffed alligator, and then give themselves airs upon the insipidity and nothingness of small talk.

The mistake is common…to imagine that it is the easiest matter in the world to talk about nothing, or everyday occurrences: it requires an active mind, an observant mind, and no small share of that invaluable, unpurchaseable, and almost unlearnable quality, good humour, to say something on everything to anybody. …

If a man must never open his lips, but for the enunciation of an aphorism, or never say anything which has not been, or may not be, in print; if he must be everlastingly talking volumes, or discussing knotty points of casuistry, politics, or metaphysics, he will find the gift of speech rather burthensome, and but few of his audience willing to hear him out.

But I am not wishing to vindicate nonsense, or extol trifling. I am only putting in a claim for the due honours of that species of talk, which must, more or less, be at times the occupation of us all. We have heard of conversasiones where common-place is studiously avoided, where politics and weather are never discussed, but where criticism, or metaphysics, or antiquities, and matters of taste, form the sole subjects of discourse. This sounds mightily edifying to be sure; but the most egregious common-place is not unfrequently heard in these parties. Let but the topics of the day be known, the last novel, or picture, or public singer, and all the conversation may be anticipated. In order to shine, the mind puts itself into the most strained and unnatural attitudes, and displays its possessions instead of exerting its power; and many a poor soul dares hardly open its lips for want of having read certain books, or seen certain pictures, or statues, or opera dancers.

Small talk obviates these evils; the mind is at ease; there is no intention of saying anything profound; there is no fear of disappointing expectation; and in this delightful recreation we often ‘snatch a grace beyond the reach of art.’

It is very pleasant to pass time agreeably, to keep the mind active without wearing it, to have all our hours engaged in some form or other; we cannot do this without some share of small talk. (8)

What if you hate small talk?

For those who detested small talk, all was not lost. Frances, Lady Shelley, wrote admiringly of the Duke of Wellington, whom she found “the most agreeable man I have ever met”:

He possesses a fund of anecdote, a very retentive memory, and a candour in expressing his thoughts which heightens the charm of his society. He tells one exactly what one wants to know, and never indulges in what is commonly called ‘small talk.’ (9)

And Harriet, Lady Granville, described one of her female acquaintances as being “one of those, and they are generally the most attractive and attracting, who cannot be amused by the mere mechanical apparatus of society, light, dress, crowd, small talk. She is either interested or bored to death, but with such excellence, such freedom from all wrong, her conduct never can err beyond a certain point….” (10)

Even the etiquette manual that advised young men to equip themselves with small talk for the ladies observed that “a fashionable fool may attain to the small talk of which much of the conversation in society is composed, and his glib confidence may so far impose upon the superficial as to make this pass for wit; but it will not be received as such by that portion of society whose esteem is desirable. Good sense, sound and varied information, are as necessary as confidence to enable a man to converse well.” (11)

How to Throw a Party In Regency London

How to Deal With Boredom: Tips from the 19th Century

Stupid News in the 19th Century

It is a sort of middling conversation, neither silly nor edifying; but, however, very necessary for you to be a master of.