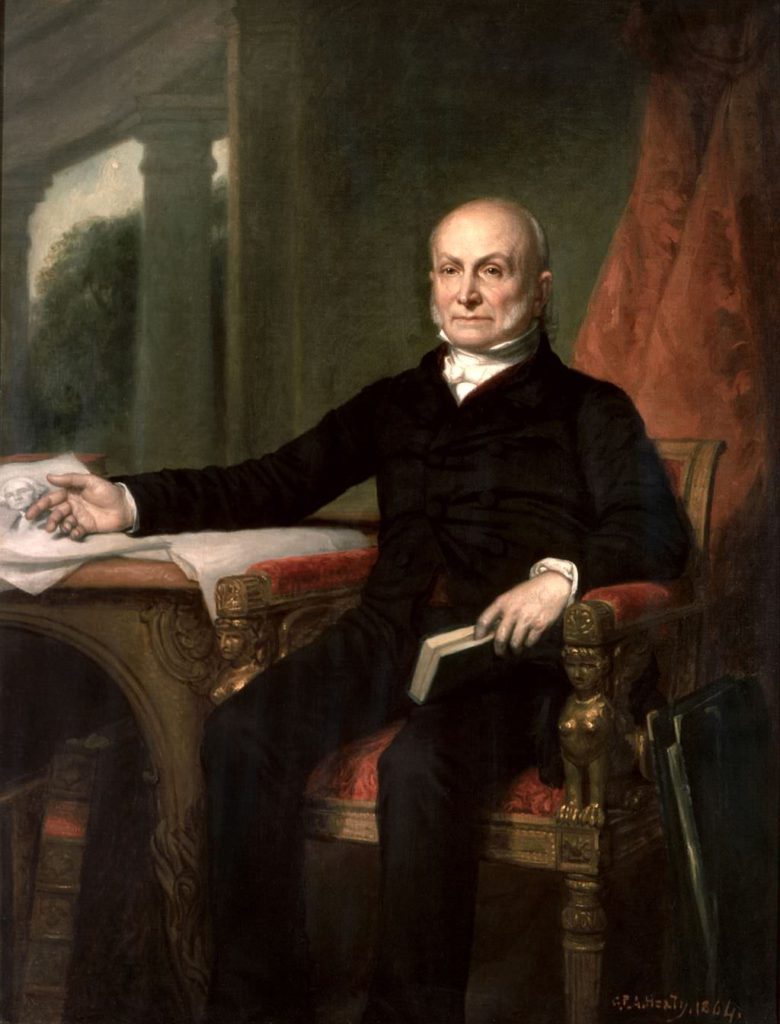 Of all the characters who appear in Napoleon in America, John Quincy Adams wins the prize for most diligent diarist. Besides giving readers a first-hand look at 19th-century American politics and diplomacy, Adams’ diaries reveal the habits and mindset of America’s sixth president. Every New Year’s Day, John Quincy Adams was prone to offering his reflections on the year that had just passed and his wishes for the future. To help ring in the New Year, here is a sample of his New Year’s Day musings.

Little different from the last month, and no better (1810)

In 1809, John Quincy Adams became the first United States Minister to Russia. He wrote this on New Year’s Day in 1810.

Day. Little different from the last month, and no better.

I close the year with sentiments of gratitude to Heaven, for the blessings and preservations which my family and myself have experienced in its course. It has witnessed another great change in my condition – brought me to face new trials, dangers, and temptations, relieving me from many of those in which I was before involved. It has changed also the nature of my obligations and duties, and required the exertion of other virtues and the suppression of other passions. From this new conflict may the favor of Heaven continue its assistance, to issue pure and victorious, as from the past. May it enable me better to discharge all my social duties, and to serve my country, and my fellow-men, with zeal, fidelity, and effect. Imploring the blessing of God upon my family present and absent, upon my wife and children, my parents, my kindred, friends, and country, I look with trembling hope at the mingled light and shade of futurity, and pass to a new year with the fervent prayer for firmness to perform as well as prudence to discern my duty, and for temper and fortitude to meet every possible variety of events. (1)

In 1814, John Quincy Adams was appointed head of the American delegation to negotiate a peace treaty with Great Britain in Ghent, Belgium. He left for Ghent in April, while his wife Louisa and their youngest son remained in St. Petersburg. The Treaty of Ghent was signed on Christmas Eve 1814, thus ending the War of 1812, although word of it reached North America too late to prevent the Battle of New Orleans. On January 1, 1815, Adams wrote:

I have risen during the month almost always before six, and without exception before daylight. Make my fire, read five chapters in the Bible, and write until between nine and ten. Breakfast in my chamber alone. Write, read papers, receive visits, and attend mission meetings until three, afternoon. Walk from one to two hours, dine at half-past four, and sit at table until six. Go to the theatre, concert, or party at a friend’s house, or write in my chamber until eight in the evening. Spend one or two hours at Mr. Smith’s lodgings, and about ten at night return home and retire to bed. This mode of life will henceforth be varied by a new change in my situation. The last ten days have been overburdened by business. Thus ends the most memorable year of my life. I close the record of it with a fervent tribute of gratitude to Divine Providence for the signal favor granted to my country by the conclusion of a treaty of peace; also for the blessings it has continued to me of a domestic nature, to my parents, wife, and children, for the increased proportion of health I have enjoyed, and for the comforts of a quiet conscience. And I implore a continuance of the favor of Heaven upon my country, family, friends, and myself; and, above all, the strength and the will to discharge all my duties to my fellow-creatures and my God.  (2)

Elevation to the summit of worldly ambition (1826)

In 1825, John Quincy Adams became president of the United States, after the contentious election of 1824, in which no candidate secured a majority of the electoral vote. Adams reflected on his first year as president in his New Year’s Day entry for 1826.

The life that I lead is more regular than it has perhaps been at any other period. It is established by custom that the President of the United States goes not abroad into any private companies; and to this usage I conform. I am, therefore, compelled to take my exercise, if at all, in the morning before breakfast. I rise usually between five and six – that is, at this time of the year, from an hour and a half to two hours before the sun. I walk by the light of moon or stars, or none, about four miles, usually returning home in time to see the sun rise from the eastern chamber of the House. I then make my fire, and read three chapters of the Bible, with Scott’s and Hewlett’s Commentaries. Read papers till nine. Breakfast, and from ten till five P.M. receive a succession of visitors, sometimes without intermission – very seldom with an interval of half an hour – never such as to enable me to undertake any business requiring attention. From five to half-past six we dine; after which I pass about four hours in my chamber alone, writing in this diary, or reading papers upon some public business – excepting when occasionally interrupted by a visitor. Between eleven and twelve I retire to bed, to rise again at five or six the next morning.

The year has been the most momentous of those that have passed over my head, inasmuch as it has witnessed my elevation at the age of fifty-eight, to the Chief Magistry of my country; to the summit of laudable, or at least blameless, worldly ambition; not, however, in a manner satisfactory to pride or to just desire; not by the unequivocal suffrages of a majority of the people; with perhaps two-thirds of the whole people adverse to the actual result. Nearly one year of this service has already passed, with little change of the public opinions or feelings; without disaster to the country; with an unusual degree of prosperity, public and private. (3)

The presidency of John Quincy Adams ended in 1829, after Adams lost the 1828 election to Andrew Jackson. In 1830, Adams won a seat in the US House of Representatives. He wrote this on January 1, 1838. Martin Van Buren was president.

The new year began with one of the most beautiful days that the course of the seasons ever brought round – a clear sky, a bright sun, a calm atmosphere, and all physical nature moving in harmony and peace. The President’s House was open, as usual, from eleven in the morning to eight in the afternoon, and was crowded with visitors innumerable. I was not among them. I have found it necessary to assume a position in public towards him and his Administration which forbids me from any public exhibition of personal courtesy which would import a friendly feeling. Mr. Clay, whose public position, not precisely the same as mine, differs little from it, went and escorted Mrs. Bell, of Tennessee, wife of the late Speaker of the House, who was also there. They afterwards came here, as did about three hundred ladies and gentlemen of those who had been at the President’s house….

I snatched a quarter of an hour before noon to call on Mrs. Madison, who also received many visitors. Just before reaching her house, I met Lewis Williams, and Mr. Graham, and Joseph L. Williams, of Tennessee, and thought they were going to my house; but, from a feeling of awkwardness at asking them the question and the fear of losing my chance to visit Mrs. Madison, I passed by them with a slight salutation. Upon what slight shades of difference depends propriety of conduct in social intercourse! These three men intended me a civility. There are no three men more entitled to a kind and courteous return. Yet they must have felt themselves slighted, and I might have returned their kindness in a manner which would have gratified them. Am I too old to learn? (4)

Still in Congress at the age of 76, John Quincy Adams wrote this on New Year’s Day in 1844.

I begin the new year, as I closed the old one, with praise and prayer to God – with grateful thanksgiving for the past, with humble supplication for the future. Physical nature never was more kindly adapted to the enjoyment of man in commencing the year, than it was this day at this place. The close of the last year was serene, mild, and beautiful. The entrance of the new annual portion of everlasting ages was yet more auspicious and cheering. The morning, noon, and night of it was delightful. I rose an hour and a half later than my time, but closed before breakfast the diary of the departed year.

From ten till three o’clock, an uninterrupted stream of visitors absorbed the time and exhausted my patience. It is generally meant in kindness – always in civility – and for a succession of fifteen years, since I left the President’s house, has greeted me in still increasing numbers. Among the visitors of this day were some of the bitterest political enemies, North and South, that I have in the world. Holmes and Campbell, of South Carolina, Burke and Hale, of New Hampshire, were of the number, and Charles Jared Ingersoll, the cunningest and most treacherous cat of them all. …

Immediately after I got disengaged from the throng, about three, I walked to Mrs. Madison’s house and paid her a visit…. I have piles of letters unanswered, and which I never shall find time to answer. Tomorrow recommences the struggle, which, for me, can terminate only with my life. May the Spirit from above in life and death sustain me! (5)

A stout heart and a clear conscience and never despair (1848)

On January 1, 1848, John Quincy Adams wrote a New Year’s letter to his only surviving child, Charles Francis Adams. This was his last New Year’s Day reflection. He died seven weeks later, on February 23, 1848, at the age of 80 (click here to read his last words).

“My Dear Son – On this commencement of a new year my thought intensely turn to you, to the partner of your life, to your children, and to the Giver of all good, in thanksgiving for all the blessings which you have been and still are to me, and in fervent supplication for the favors of Divine Providence upon you one and all; especially that you may be sustained in your incorruptible integrity through all the trials that may be reserved for you upon earth, and that whatever may be their ultimate issue here, of which I abate not a jot of heart and hope, you will at least be sure of the approbation of your Maker.

A stout heart and a clear conscience, and never despair.

I look with trembling hope at the mingled light and shade of futurity, and pass to a new year with the fervent prayer for firmness to perform as well as prudence to discern my duty, and for temper and fortitude to meet every possible variety of events.