In 1829, Caroline Cushing, a resident of Newburyport, Massachusetts, travelled to Europe with her husband Caleb Cushing, a lawyer and member of the Massachusetts Senate. While Caleb employed himself in studying the laws and institutions of the countries they visited, Caroline wrote a fascinating account of their journey through France and Spain. She provided the following description of a Spanish Christmas in Madrid in 1829. 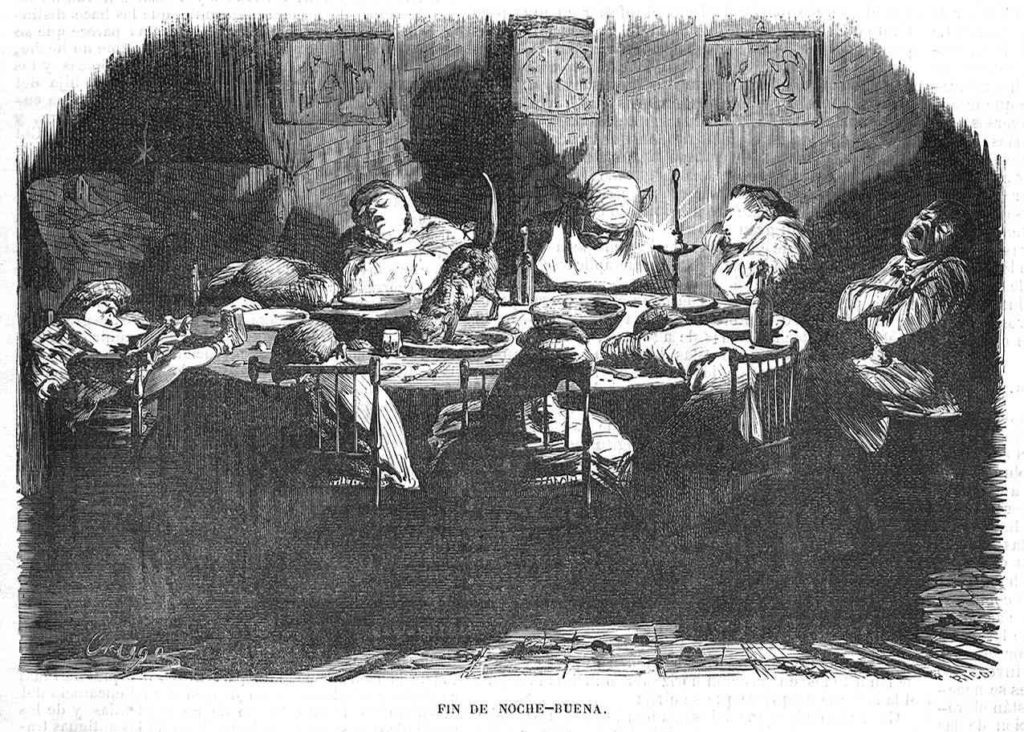 Christmas week is a season of great festivity at Madrid. Although it was intensely cold, I did not abstain from my accustomed visits to interesting objects in the city; and on the day before Christmas, I made another unsuccessful attempt to see the Armory. But my walk was not wholly lost, for the Calle Mayor and the Plaza Real exhibited a very amusing scene, well worthy the trouble of even a longer walk to witness it. Little booths and stalls were all around the Plaza, and on both sides of the street, filled with every variety of fruits, cakes, and confectionary, together with children’s toys of all descriptions, which were held up, successively, by their respective proprietors, and declared to be the cheapest and finest toys, the sweetest and richest fruits, the most delicious cakes and confectionary, which could possibly be purchased; and this the happy looking groups, which thronged the place, seemed to take for granted, as I saw a multitude of children hurrying backward and forward, loaded with fruits and toys, almost too many for their little hands to contain; and chattering and laughing with each other, full of happiness and hilarity.

The toys, which were here displayed, are peculiar to the season of the year, and are not generally sold at Madrid, except at Christmas. A great part of the collection is composed of…porcelain toys from Malaga, …which were bought up with much eagerness, by the old as well as the young, and appeared to interest the adult quite as much as the child. This will not seem very singular, when you take into consideration that the dress of these little images represents almost every variety of Spanish costume, in the most perfect manner; which of course renders them more valuable than they would otherwise be.

In addition to these there were other toys for children alone, consisting of various instruments of music, of the most peculiar construction, and producing sounds little in consonance with the rules of harmony. Many of them were a similar species of tamborine to those used by the manolas when dancing before the Queen. They were very gaudily trimmed and painted; and instead of bells upon the edge of them, there were little pieces of tin strung upon wire. But the most curious of these instruments was called the zambomba. It is precisely in form of a small drum, with parchment at one end only. Through the centre of the parchment is inserted a small reed; and the music, if so it may be called, is produced by rubbing this reed with the fingers.

I amused myself, for a long time, in examining all these different toys; and in listening to the din of voices around me, pitched upon every possible key, from the deep toned cry of agua, agua, uttered by the watermen, to the soft and persuasive voice of the pretty toy girl, as she held up her attractive wares before the longing eyes of the little urchins around her.

In Spain, the night preceding Christmas is called noche buena; and is spent by a great portion of the inhabitants of Madrid in meeting together in parties of friends, to feast upon fish, fruits and sweetmeats, although they religiously abstain from eating meats; and after this they attend mass, which commences at a late hour, and in some of the churches is celebrated with much pomp and ceremony. The streets are filled, at almost every hour through the night, with a concourse of people, walking about, and singing hymns appropriate to the occasion, accompanied with a plentiful quantity of the anti-harmonic melody, elicited from the zambombas and other equally fine toned instruments, which are so inappropriately used to usher in one of the most solemn festivals of the Catholic church. I was much disappointed, however, in the manner of celebrating this festival. I had anticipated something unusually grand and novel in the ceremonies of the day, but found, in reality, little to distinguish it from any other, except that mass was constantly performing from morning till night; and every shop in Madrid was closed, with the penalty of a heavy fine to any one who should dare to sell, even to the value of a real, either on that day or the following one. There were no processions or other great religious ceremonies, to denote the difference between Christmas day and any other festival of the church.

In the evening I attended the Theatre del Principe for the first time since my arrival in Madrid. There had been no actor of any particular note performing for the time; and I found, while in France, so little gratification in attending the theatre, unless to see some celebrated performer, that I put off going in Madrid, from time to time, until the period for leaving it had nearly arrived, and I had not yet seen the interior of a Spanish play-house. But as several interesting pieces were announced for Christmas evening, I determined to attend, and was exceedingly entertained by the performances.

The plays were not remarkable as pieces of composition, but were highly amusing nevertheless. The actors and actresses exchanged characters, through each of the plays, the men acting the part of females, and vice versa. This whimsical custom, confined, I believe, wholly to the time of Christmas and Carnival, gives rise to scenes the most fantastic, and irresistibly laughable. For instance, you see a gentle shepherdess, with her straw gipsey upon her head, and her crook in hand, reclining asleep upon a bank of flowers, in the midst of a shady grove. While you are investing her, in fancy, with all the simple but attractive charms, which belong to her peaceful life and romantic occupation, she suddenly starts from her slumbers, and the lovely shepherdess is at once transformed into an amazon of six feet in height, whose coarse, masculine voice, as she utters a yawning exclamation, banishes, most effectually, all those pleasing dreams of the imagination, to which her first appearance had given rise. Hearing a rustling sound near her, she conceals herself behind a tree, when her love-lorn swain, a mere lady’s page in stature, makes his appearance, and commences a sorrowful ditty in the softest and sweetest accents possible, humorously contrasting with the rough-toned voice of his lady-love. Their meeting was amusing to the highest degree; and the uncontrollable bursts of laughter, heard in every part of the theatre, sufficiently proved the whimsical character of the entertainment.

This was but one, among a multitude of scenes of the same kind, which were pleasantly diversified by dances of the most animated and beautiful description. They were generally performed by very young girls, whose graceful movements and wonderful skill elicited the constant admiration and applause of the audience. One of the dances was French, but all the others were Spanish dances of different kinds. Of these the bolero was to me far more pleasing than any of the others.

Caroline Cushing, who was said to have possessed “rare intellectual endowments,” died on August 28, 1832, at the age of 30. (2) She had no children. Caleb Cushing, who never remarried, went on to have a distinguished career as a politician and diplomat. Among other things, he served as Attorney General of the United States under President Franklin Pierce (1853-1857) and as the American Minister to Spain (1874 to 1877). He died on January 2, 1879, at the age of 78. Caroline’s father was Samuel Sumner Wilde, an associate justice of the Massachusetts Supreme Judicial Court from 1815 to 1850.

2 commments on “A 19th-Century Spanish Christmas”

I saw a multitude of children hurrying backward and forward, loaded with fruits and toys, almost too many for their little hands to contain; and chattering and laughing with each other, full of happiness and hilarity.