An Italian immigrant who served in Napoleon’s Grande Armée, Félix Formento became a prominent medical practitioner in 19th-century New Orleans. He fathered a son who similarly became a doctor and worked for a Napoleon on the battlefield. Formento also holds the distinction of being the Napoleon in America character who lived the longest non-fictional life. 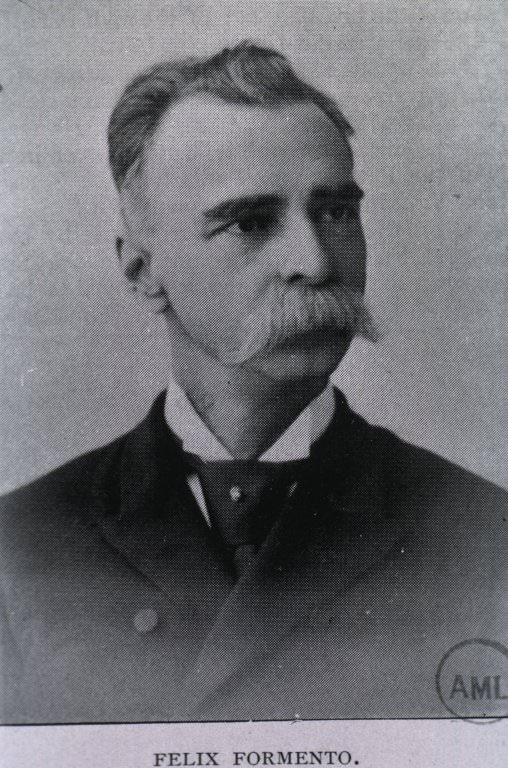 Félix Formento was born in Piedmont in 1790. He studied medicine at the University of Turin, from which he graduated in 1813. He joined the Grande Armée as a surgeon and served in the last campaigns of the Napoleonic Wars.

After Napoleon’s downfall, Formento went to the United States. With other Bonapartists, he took a plot in the Vine and Olive Colony in Alabama, which he soon sold to join Charles Lallemand’s expedition to establish the Champ d’Asile in Texas (see my post about Bonapartists in America). When that failed, Formento and other ex-colonists wound up on Galveston Island in the company of Jean Laffite. According to a late-19th-century biographer:

While serving in the ‘Champ d’Asile,’ at a time when complete demoralization existed among the remaining few disappointed members of that expedition, Dr. Formento was induced by the famous privateer, Lafitte, to visit his headquarters in some island or locality in the vicinity so as to give his professional services to his daughter, to whom he was greatly devoted. She had been affected for some time with some serious disease – typhoid fever it was thought. Dr. Formento remained for several weeks at Lafitte’s house and was treated with the consideration of a king or, still better, as the savior of the celebrated privateer’s only daughter. After her recovery Lafitte gave the young Doctor many tokens of gratitude, and also provided him with the means of reaching New Orleans, where he arrived during the year 1818. (1)

This has the whiff of an oft-told tale that mutated in the telling. If Formento did attend to someone in Laffite’s household, it was probably a slave or mistress, as Laffite is not known to have had a daughter. And although Laffite would undoubtedly have been grateful to Formento, he helped many Champ d’Asile refugees survive and get to New Orleans, not just the doctor.

Félix Formento established a medical practice and drugstore at the corner of Bourbon and Dumaine Streets. There were about 40 physicians in New Orleans at the time – a mix of French, Creole and Anglo-American doctors, some no more than quacks. Another practitioner encountered in Napoleon in America, Dr. Reynard de Laferrière, advertised his “sulphurous steam-baths” in a manner that made it sound like city residents were in dire need of medical care.

That establishment which for five months back has enjoyed the patronage of the most experienced physicians of Louisiana, is so distributed that each class of society is kept separate.

Those Baths do radically cure Ringworms, the Scurf, the Itch, Ulcers, Leprosy in its first stage, recent Palsy, old Rheumatisms, slow Fevers, the Gout, all the swells produced either by the action of the air, a suppression of perspiration, a repercussion of humor, or a weakness of the fibres.

Combined with proper medicines, those Baths cure in a short time the pains in the bones, and all the diseases of the skin arising from a venereal life. (2)

Dr. de Laferrière probably did no more harm than most physicians. In addition to plant-based medicines (often based on folklore), common remedies included bleeding, emetics (substances that induce vomiting), antimony, quinine and mercury. The same medicines tended to be given to everyone, regardless of the medical condition. There was little understanding of “germs,” and it was commonly thought that most fevers were variations of one basic disease. The idea that “vitiated air” and “an atmospheric predisposition” were responsible for yellow fever still prevailed among the city’s medical practitioners in 1854. (3) European doctors were thought to be ahead of their American counterparts in terms of skills, and were certainly regarded as such by New Orleans’ Creole (European-descended) inhabitants.

In this atmosphere, Félix Formento appears to have developed a good reputation, and at least took something of an evidence-based approach to practice. During a smallpox epidemic in 1825, the Physico-Medical Society of New Orleans (which represented the city’s English-speaking physicians) and the Société Medicale (representing the French-speaking physicians) debated the role of the smallpox vaccine. Did one vaccination provide sufficient protection?

Formento inoculated a number of people who had been vaccinated earlier with ‘variolic matter.’ These patients did not contract smallpox and Formento thus proved the importance of vaccination. (4)

Incidentally, Napoleon was a strong believer in the smallpox vaccine. In 1805, he insisted that all his troops who had not had smallpox must be vaccinated, and the following year he extended the vaccination campaign to French civilians.

Formento was lauded for his efforts on behalf of stricken citizens during the city’s 1832 cholera epidemic, which overwhelmed the city’s medical facilities.

In 1834, Formento, an ardent supporter of Napoleon, officially welcomed Dr. François Antommarchi – another Italian who had been Napoleon’s physician during his last years on St. Helena – on his visit to New Orleans. Napoleon did not have a high opinion of Antommarchi, but the latter played up his connection with the Emperor for all it was worth.

Formento’s sound reputation is indicated by the fact that in 1835 he was listed as one of the charter founders of the Medical College of New Orleans. This reflected a compromise by the state legislature to include French-speaking physicians, who had proposed their own medical school as an alternative to the Anglo-sponsored Medical College.

In 1836 Félix Formento married a widow, Henriette Palmyre Poullault (maiden name Lauve), who already had a daughter, Elodie, born in 1824. Their son, Félix Junior, was born March 16, 1837. They later had a daughter, Palmyre, and possibly one or two other boys.

Formento, who had by then acquired much wealth, was badly hit by the financial crisis of 1837. He took refuge in the village of Plaquemine, in Iberville Parish, where he continued to work as a physician. Friends soon enticed him back to New Orleans. He stayed there, practicing medicine, until 1851, when he and his family moved back to Turin. Félix Jr. received his medical degree from the University of Turin in 1857, and served as a surgeon in the Franco-Sardinian Army under Napoleon III during the Italian Campaign of 1859 (part of Italy’s war of independence against Austria).

In the spring of 1860 the Formentos returned to the United States. However, in 1862, after New Orleans fell to the Union Army, Formento Sr. again left for Italy. Formento Jr. remained in the United States. He tended to Civil War wounded at the Louisiana Hospital in Richmond, Virginia, and wrote a well-regarded medical pamphlet called Notes and Observations on Army Surgery (New Orleans, 1863). In 1864 he returned to New Orleans where he continued to practice medicine and served on the Louisiana Board of Health.

Félix Formento Sr. died in Pignerol, southwest of Turin, on January 6, 1888, at the remarkable age of 98, still apparently retaining his “brilliant intellect.”

With his great talent as a physician he combined the most precious and amiable qualities of heart and soul. Modest, kind and devoted to his friends, of an unbounded charity, of refined and elegant manners, very dignified in appearance and remarkably handsome, he was to the end, and in spite of many years of absence, remembered by all those who knew him, as a fine type of the old school gentleman physician. (5)

Formento Jr. was elected president of the American Public Health Association in 1891. He died on June 4, 1907.

Drinking Cold Water and Other 19th-Century Causes of Death

With his great talent as a physician he combined the most precious and amiable qualities of heart and soul.

Biographical and Historical Memoirs of Louisiana