While Napoleon Bonaparte condemned the slave trade, he had no strong opposition to slavery. This makes it interesting to imagine how he might have reacted to the slavery he encounters in New Orleans and the other places he visits in my novel Napoleon in America. 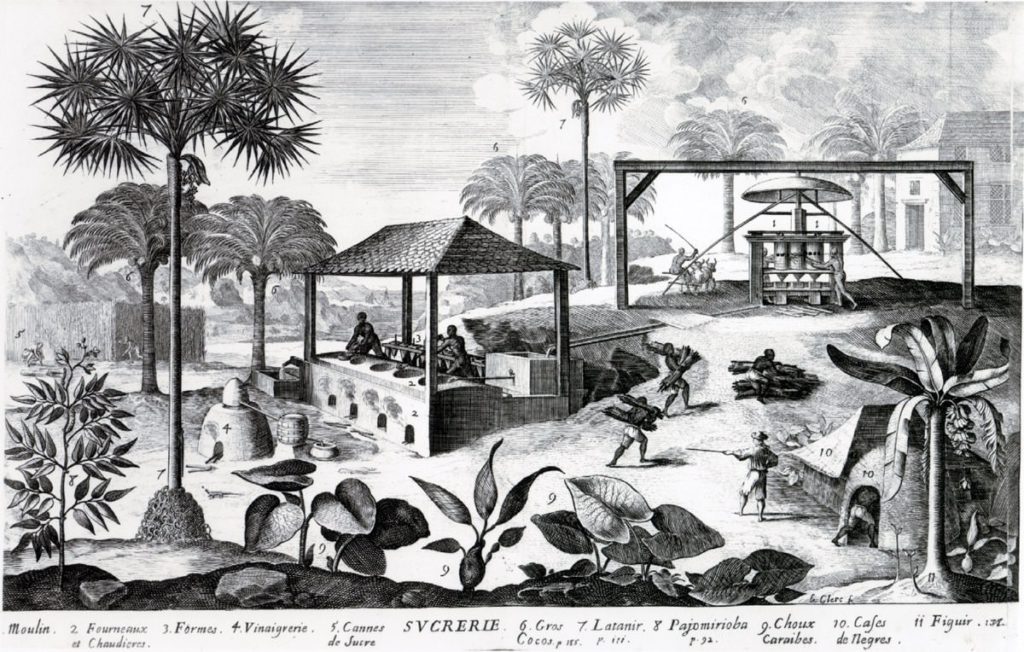 A plantation on Saint-Domingue (Haiti), where Napoleon supported the abolition of slavery

During his first posting as an artillery officer with the La Fère regiment at Valence, Napoleon read one of the most powerful anti-slavery works of the period: the multi-volume Histoire philosophique et politique des établissements et du commerce des Européens dans les deux Indes by the Abbé Guillaume Raynal.

Like most of his European contemporaries, Napoleon was a racist. He referred to Bedouins, native Americans, Pacific Islanders and Africans as “savages” – a term he also applied to Cossacks. He treated the Saint-Domingue-born mixed-race general Alexandre Dumas (father and grandfather of the writers of the same name) with contempt. At the same time, he welcomed mixed-race men into his army in Egypt, and for the expedition to Saint-Domingue (Haiti).

Napoleon based his policies towards slavery on pragmatism. He favoured whatever would most benefit him and France. When he conquered Malta en route to Egypt in 1798, he freed 2,000 Muslim slaves found on the galleys of the Order of Malta. He called on the Turkish governors in Algiers, Tunis and Tripoli to reciprocate the gesture by liberating any Christians who might be found on their galleys. (1) Yet in Egypt Napoleon condoned slavery, hoping to gain the goodwill of the Egyptians.

Although France abolished slavery in its colonies in 1794, this policy had not been fully implemented by the time Napoleon became First Consul in 1799. When insurrection broke out in Saint-Domingue, Napoleon argued that France should renew its commitment to emancipation, because

Napoleon continued to express his commitment to emancipation even as he sent an expedition to try to overthrow the black leader Toussaint Louverture.

Nonetheless, by a decree of May 20, 1802, Napoleon restored slavery and the slave trade in Martinique and other West Indian colonies (the law did not apply to Guadeloupe, Guyane or Saint-Domingue). Napoleon argued he was “maintaining” slavery, since its formal abolition had not actually been realized. He hoped to encourage the return of French settlers to the colonies, believing they were better able than the blacks to defend French interests against the British. Also, white planters in La Réunion had threatened to secede rather than free their slaves.

When Napoleon returned to France in 1815 after his exile on Elba, he knew that he had to appear to be a more liberal leader. As part of this, he issued on March 29 a decree abolishing the slave trade, which you can read on the Napoleon Series website.

Napoleon and the slave on St. Helena

When Napoleon was in exile on St. Helena, he conversed (via the interpretation of one of his companions, the Count de Las Cases) with an old slave called Toby, who served in the household of the Balcombes, the family in whose pavilion Napoleon resided when he first arrived on the island in 1815. When Napoleon heard how Toby had been captured and enslaved, he reportedly expressed a wish to purchase Toby and send him back to his home country. He said to Las Cases:

What, after all, is this poor human machine? There is not one whose exterior form is like another, or whose internal organization resembles the rest. And it is by disregarding this truth that we are led to the commission of so many errors. Had Toby been a Brutus, he would have put himself to death; if an Aesop he would now, perhaps, have been the Governor’s adviser, if an ardent and zealous Christian, he would have borne his chains in the sight of God and blessed them. As for poor Toby, he endures his misfortunes very quietly: he stoops to his work and spends his days in innocent tranquility…. Certainly there is a wide step from poor Toby to a King Richard. And yet, the crime is not the less atrocious, for this man, after all, had his family, his happiness, and his liberty; and it was a horrible act of cruelty to bring him here to languish in the fetters of slavery. (3) 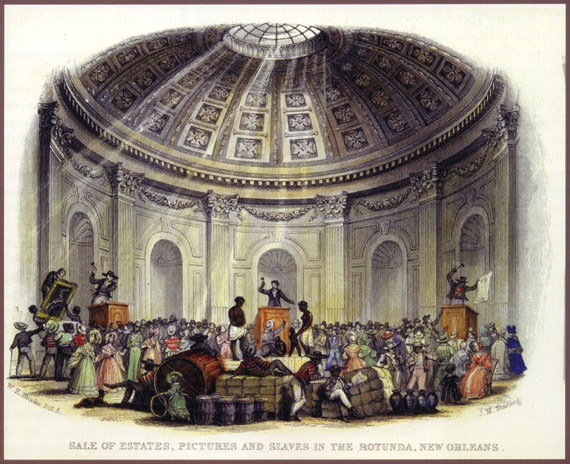 “Sale of estates, pictures and slaves in the rotunda, New Orleans.” Engraved by J.M. Starling after work by William Henry Brooke, 1842.

For Napoleon in America, I had to imagine how Napoleon might have reacted to the slavery he encounters in the places he visits in the novel, starting with New Orleans. New Orleans society at the time (1821) was stratified into three race-based tiers: whites, free people of colour (gens de couleur libres), and slaves.

The whites were a mix of:

The free people of colour, who were considered legally and socially inferior to whites, included:

Slaves were typically black, primarily of African origin. Virtually all well-to-do New Orleanians – whether white or coloured – owned slaves. Some owners used them as servants. Some hired them out for wages. Effective in 1808, there was a ban on importing slaves from outside the United States. However, New Orleans slavery could still be fed by imports from within the country. There was also a thriving trade in smuggled slaves, brought into New Orleans by the Laffite brothers and others.

Slaves among the Saint-Domingue refugees

In 1809 the population of New Orleans doubled with the arrival of three dozen ships from Cuba, carrying over 9,000 refugees from Saint-Domingue. Another 1,000 refugees arrived in 1810. They had fled Saint-Domingue during the slave revolution that culminated in independence from France in January 1804. The troops Napoleon had sent under his brother-in-law, General Leclerc (husband of Pauline Bonaparte), to suppress the insurrection were crushed by disease and the revolutionaries. The refugees first settled in Cuba, which was under Spanish rule. Then Napoleon invaded Spain and, in 1808, placed his brother Joseph Bonaparte on the Spanish throne. In retaliation, the Cuban authorities, who remained loyal to the ousted Spanish king, expelled all French nationals, including the Saint-Domingue refugees.

The refugees were a mix of whites (primarily French and French Creoles), free people of colour, and slaves. Lawrence Powell, in his excellent book The Accidental City: Improvising New Orleans, notes that:

Legally speaking the ‘slaves’ listed on the manifests were probably not slaves. The French National Convention had granted them freedom in law, which Toussaint’s [Haitian] armies then established in fact. Somehow these liberties had been forfeited during passage to Cuba. There are documented cases of so-called friends and guardians, to say nothing of former business associates and creditors, re-enslaving the legally helpless exiles upon arrival in Cuba. (5)

Slaves were granted Sundays and religious holidays off. On these “free days,” they could sell their crafts and produce – surplus crops, nuts and berries, fish and game, etc. A grass-covered field behind the Vieux Carré (the French Quarter), across Rampart Street at the end of Orleans Street, was the legally designated place for slaves to gather. Originally called the Place de Nègres, by the mid-19th century it was known as Congo Square. It is now part of Louis Armstrong Park. Here slaves congregated to socialize, to buy and sell, and to dance and sing, African-style.

British architect Benjamin Latrobe stumbled upon such a gathering in 1819. Approaching the square, he

heard a most extraordinary noise, which I supposed to proceed from some horse mill, the horses trampling on a wooden floor. I found, however on emerging from the houses onto the Common, that it proceeded from a crowd of 5 or 600 persons assembled in an open space or public square. I went to the spot & crowded near enough to see the performance. All those who were engaged in the business seemed to be blacks. I did not observe a dozen yellow faces. (6)

The crowd was formed into circular groups. In one of these rings, two women were dancing.

They held each a coarse handkerchief extended by the corners in their hands & set to each other in a miserably dull & slow figure, hardly moving their feet or bodies.

In another circle, a dozen women “walked, by way of dancing, round the music in the center.” Latrobe described the drums and other instruments, some of which he drew. Reflecting the general European attitude of the time, he recorded:

A man sung [sic] an uncouth song to the dancing which I suppose was in some African language, for it was not French, & the women screamed a detestable burthen on a single note. The allowed amusements of Sunday have, it seems, perpetuated here those of Africa among its inhabitants. I have never seen anything more brutally savage, and at the same time dull & stupid, than this whole exhibition. (7)

“Rose” in Napoleon in America

Nicolas Girod’s New Orleans slave is the only character in Napoleon in America for whom I had to invent a name. The 1820 US census lists Girod as having a female slave age 26-44, which means she was born before 1795. Girod also had a male slave age 14-25. I decided to make Girod’s female slave one of the Saint-Domingue arrivals, and I named her Rose.

This man, after all, had his family, his happiness, and his liberty; and it was a horrible act of cruelty to bring him here to languish in the fetters of slavery.