New Orleans, where Napoleon lands in Napoleon in America, was an accommodating place for his supporters in the years after 1815. French speakers constituted about three-quarters of the city’s population of some 27,000. Many of the French and Creole inhabitants were sympathetic to Napoleon. They disliked England, their opponent in the Battle of New Orleans. Something of the feeling of the time can be gathered from a riot that took place in the city over a French flag on a British ship in March of 1817. 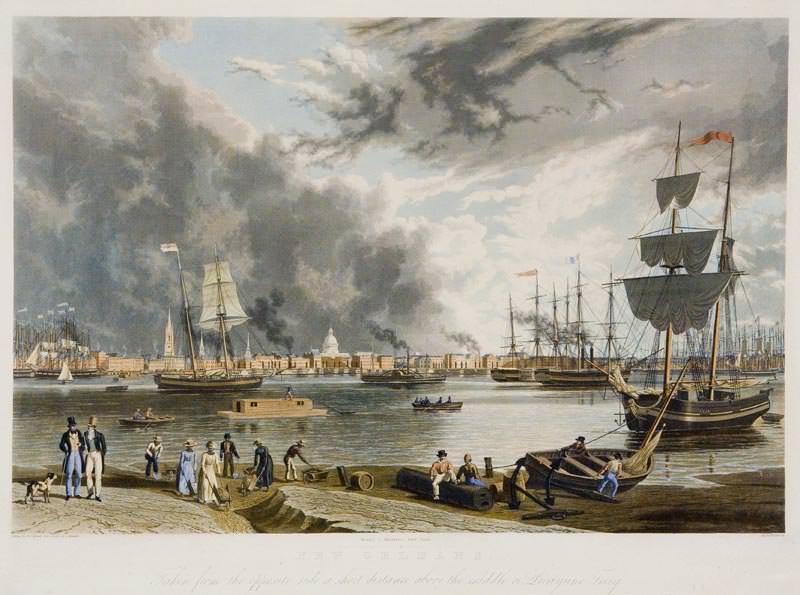 New Orleans – Taken from the Opposite Side a Short Distance above the Middle or Picayune Ferry, by W. J. Bennett from a sketch by A. Mondelli, 1841

A British ship & its French flag

Trouble arose after a ship from Liverpool, called the Hamilton, under Captain Colshead (Colshed), docked next to a French vessel, the Pacifique, along the levee at the foot of St. Louis Street. On its masthead, the Hamilton flew the Union Jack and, below it, “a small vane [short triangular flag], which bore some resemblance to the tri-colored flag.” (1) Though it was no longer the French flag – that was the Bourbon white flag – the tricolour had been the flag of revolutionary and Napoleonic France.

On March 17, when both ships were loading, a dispute arose between the British and French crews about the landing stage leading to the levee. Although the Hamilton had been in port for three weeks, it was now “discovered that [the] vessel’s vanes had a tri-coloured tail, and this, it was industriously propagated, was intended as an insult to the French part of the community; it was immediately seized upon by a certain class of persons long known in [the] vicinity, whose purposes it suited.” (2)

Encouraged by the mate of the Pacifique, who addressed the crowd with a sword in his hand, spectators started yelling at the Hamilton to take down the flag. Some of the crowd boarded the Hamilton, but after threats from the captain and crew they returned to the levee and began to throw brickbats and oyster shells at the ship. The city guard approached and the crowd dispersed.

The next morning, March 18, people again assembled on the levee. A couple of sailing masters of vessels in the vicinity of the Hamilton told Captain Colshead to take down the French vanes, as their continuing display could endanger the safety of himself, his crew and his vessel. Colshead said he would do so if it was against American law to keep them raised. The sailing masters then called on Commander Daniel Todd Patterson of the US Navy and asked him to have the vanes pulled down, indicating that Colshead would abide by Patterson’s direction. Patterson replied that “as the vanes had been represented to him, they contained nothing offensive to the government of the United States or in violation of its laws, and that were he in the captain’s place, he would not haul them down by compulsion.” (3)

Stirring up the mob

Around two in the afternoon, British businessman James Stuart arrived at the Hamilton, at which time a crowd was gathering on the levee, one of them with a large stick. Stuart advised Colshead to ask New Orleans mayor Augustin de Macarty for assistance. Colshead told the mayor that a crowd was collecting around his ship and he wanted them dispersed. He also wanted the man with the stick to be arrested, as he “seemed to be going about with a view of stirring up the mob.” The mayor told him to get the man’s name and to go to a justice of the peace. He also informed Colshead that “he understood it was intended by the crowd that evening to take down the vanes and drag the English colors through the streets.” (4)

Colshead returned to the Hamilton in the company of John Davidson, the British consul to New Orleans. Davidson looked at the vanes, observing “he could find nothing in them that could give offence to any one.” Around four p.m., Stuart went to the ship and “saw the crowd driven away by the crew of the ship, who were armed with staves, and the flour they were engaged in loading was thrown off the stage by the crowd.” (5)

The captain was advised to go on board and protect his vessel; he was then standing at the end of the stage with two American masters of vessels. [Stuart] went on board with the captain and some others, when the mob endeavoured to force their way up the stage, armed with swords and pistols, about 15 in number. Shortly after the mayor came on board and told the captain he would take charge of the vessel. The captain immediately ordered his crew to desist from further opposition, and go forward; at the same time informing the mayor he expected everything would be left in the same condition as when he took charge of the vessel, even to the vanes that were then flying. The mayor observed he would be responsible, and told the captain to go below, where [Stuart] accompanied him with others, under a belief that the mayor had taken charge of the vessel, as he was then on deck.

A few minutes after going below they were called to from the deck to come up, as the mob was boarding. [Stuart] discovered, on coming on deck, the crew retreating, pursued by the mob with pistols, swords, and cutlasses. [Stuart], in looking round, saw one of the crew pursued by one of the mob with a dirk, when another advanced & shot him through the neck with a pistol. The captain and those with him again returned to the cabin and shut the cabin door after them. As the captain went down, the mob fired a pistol after him.

[Stuart] seeing no convenient mode of retreat, and being pursued by one of the mob, with a cutlass in one hand and a pistol in the other, stood still and waited the approach of the assailant, and in the act of drawing the stroke with the cutlass, [Stuart] caught his arm, and being on a higher part of the deck, gave the assailant a push, who fell against the companion door. [Stuart] immediately stepped upon the hen coop, and from thence to the bowsprit of the Tennessee, where he remained until the arrival of the United States’ troops. [Stuart] saw during the affray the British consul struck three times on the shoulder by the mob. (6)

A seaman was murdered, the mate of the ship and four of the crew severely wounded, the rioters then tore down the vanes, cut away the rigging, chopped the main and mizzen-masts, broke the skylight, through which they fired several pistols into the cabin, in which were…the British Consul, the captain of the ship, and several other persons and, when they could find nothing else to vent their spleen, they gallantly tied a monkey’s chain round his neck and threw it overboard, and most magnanimously cut an English duck’s head off.

What they would have found next to indulge their malice on, or where they would have stopped, it is impossible to say, had not Col. Reynolds, the marshal, went down to headquarters to request military assistance to preserve the peace of the city. (7)

Arrival of the troops

On being informed of the riot, Major General Eleazer Wheelock Ripley marched out soldiers from his garrison. By the time they arrived, the assailants had already made their escape, except for two or three who were taken by the military. Ripley stationed a strong guard on board the Hamilton and cleared away the crowd. Several more people were subsequently arrested.

A later report claimed that the culprits were led by Captain Pierre Liquet, a member of a group of smugglers and pirates who haunted the region of Barataria Bay, south of New Orleans. (8) The Barataria gang was loosely under the control of pirate Jean Laffite and his brother Pierre. Liquet had commanded a privateer during the Napoleonic Wars and the War of 1812. One of his ships was called the Napoleon. He was also a slave smuggler. In addition to the Barataria men, the mob consisted of sailors from the French ships in port and some Bonapartists from the French population of New Orleans.

Feverish reports of the New Orleans riot soon made their way across the country. According to an extract of a letter from New Orleans to a gentleman in New York, dated March 20:

Gen. Ripley ordered out his men, and secured about 15 of the fellows, and was obliged to fire on the remainder to disperse them. This morning the mayor ordered the prisoners to be released, which was done. In consequence of which the sea captains formed a line and attempted to take the mayor and tar and feather him, but did not succeed. The whole town is in an uproar and ere it ends there will be much blood shed. The Hamilton had all her masts cut away, and about 100 shots were fired in the cabin from the docks. A guard of men, with Major Humphreys at their head, has just past me with 10 or 12 prisoners, whom he says he will not deliver to the civil authority but will have them tried by military laws. The press, for fear of this affair coming public, has been ordered not to mention particulars, and nothing of importance has been seen in any paper – the ladies are frightened to death. The captain (former mate) of the Hamilton has given his ship up as a prize to the American government by the advice of the English consul. He says that his ship was taken in an American port by force of arms, and his colors pulled down – himself and the living part of the crew taken prisoners – consequently he thinks that the ship is a lawful prize, and himself and men prisoners of war. This affair will be of serious consequence. The English consul has also offered to give himself up as a prisoner of war, and some of our petit maitres begin to look a little blank on the occasion. This morning every British ship in port has hoisted the same colored vane, and have armed their men, who are determined to protect their ships or die in the attempt. Every man in the city has a sword by his side and pistols in his pockets. (9)

This was an exaggeration, soon corrected by the following.

We have the best authority, of gentlemen who were eye-witnesses of the whole of the late disturbance at New Orleans, for saying that the affair has been greatly exaggerated in all the accounts that have been published of it. There was an affray, it is true, originating in a dispute between two vessels, about wharfage, or something of that sort. When people are disposed to quarrel, the slightest pretext is sufficient. In this way, probably, the tri-colored vane excited the assault on the British vessel. One person only was killed, instead of several, as represented. The British captain was not hurt, nor was the vessel greatly injured. The mob dispersed before the military arrived; and of course they had no occasion to fire. There are other particulars mentioned in the private letters published, for which there appears to have been no sufficient foundation. The imaginations of the writers appear, in a moment of trepidation, to have enlarged every object, and clothed every circumstance with horror. (10)

[Stuart] discovered, on coming on deck, the crew retreating, pursued by the mob with pistols, swords, and cutlasses.