The New Orleans in which Napoleon lands in Napoleon in America was fertile ground for Bonapartists. In 1821 New Orleans was the nation’s fifth-largest city (after New York, Philadelphia, Baltimore and Boston), with a population of approximately 27,000. French speakers accounted for some three-quarters of that total. About 1,500 of these were actual French citizens, fresh from Europe. Another 10,000 or so were refugees from Saint-Domingue who had arrived in 1809 and 1810. The remainder were other Creoles, American-born descendants of the Europeans. (For more about the racial stratification of the city, see my post on slavery in New Orleans.) 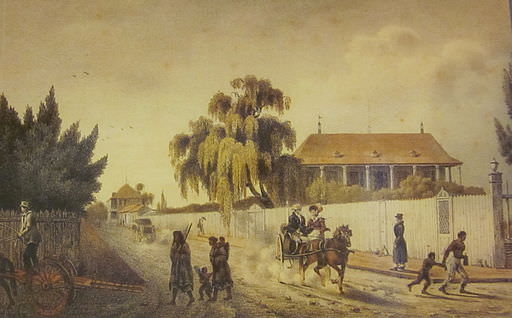 Most of the French and Creole population were sympathetic to Napoleon. They regarded him as one of the great men of the time. Local opinion was also coloured by dislike of England. Memories of the 1815 Battle of New Orleans were still fresh. Vincent Nolte writes that when news of the Battle of Waterloo reached New Orleans:

Mr. Thierry, the talented but extremely Bonapartist editor of the Courrier de la Louisiane, undertook to analyze this news, and to prove, by a series of logical conclusions, that it masked a disastrous defeat of the British army, and that Napoleon had undoubtedly achieved a brilliant triumph, which every good Frenchman was consequently bound to celebrate, without loss of time. Preparations were instantly made to comply with this suggestion, and that same evening busts of Napoleon, crowned with wreaths of laurel, were borne about in procession, surrounded by hundreds of torches, and several bands of music were engaged to play and sing national French airs and hymns. (1)

The same paper announced Napoleon’s death by reprinting an extract from the London Examiner of July 8, 1821, which began as follows:

The age has lost its greatest name – Napoleon Bonaparte….The animal who encumbers his once magnificent throne, and all the vampires of legitimacy, will doubtless chuckle over the melancholy end of the man whose genius abashed them, even when in his remote prison; but there are hearts on which the news of his death strikes like a heavy blow. He was far away from our eyes and our thoughts, but we felt a pervading consciousness that he lived, and something like a feeling that he might again appear among us, as a soldier still unequalled, as a man taught wisdom by experience. (2)

By 1821, the predominantly French character of New Orleans was changing. After Napoleon sold the Louisiana Territory to the United States in 1803, Anglo-American Protestants poured into what had been a French and Spanish Catholic city. This was a deliberate strategy on the part of President Thomas Jefferson to integrate Louisianans into the United States. The newcomers ranged from uncouth riverboat men known as Kaintucks, to businessmen and professionals from New England and the mid-Atlantic states. They regarded the Creoles as lazy, uneducated and lacking in business sense.

Benjamin Latrobe, a British architect who emigrated to the United States in 1796, lived and worked in New Orleans from 1818 until his death from yellow fever in 1820. He observed:

There are…three societies here, first the French, second the American, and third the mixed. The French side is not exactly what it was at the change of government, and the American is not strictly what it is in the Atlantic cities. The opportunity of growing rich by more active, extensive and intelligent modes of agriculture and commerce has diminished the hospitality, destroyed the leisure and added more selfishness to the character of the Creoles. The Americans, coming hither to make money and considering their residence as temporary, are doubly active in availing themselves of the enlarged opportunities of becoming wealthy which the place offers. …

Some French have come hither since the return of the Bourbons, but they did not find themselves at home; some joined General Lallemand in his settlement on the Trinity River, a few remained so as sensibly to increase the French population. The accession, if worth mentioning, did not exceed the emigration which has taken place of those who did not like the American Government, or had amassed fortunes and have returned to France or settled in the West Indian islands. Since the breaking of Lallemand’s colony, a few have returned to New Orleans, but so few that they are not a perceptible quantity, even in the comparatively small French community.

On the other hand, Americans are pouring in daily, not in families, but in large bodies. In a few years, therefore, this will be an American town. What is good and bad in the French manners and opinions must give way, and the American notions of right and wrong, of convenience and inconvenience, will take their place. … [O]ne cannot help wishing that a mean, an average character, of society may grow out of the intermixture of the French and American manners. …

There is a lady, and I am told a leading one among the Americans, who can speak French well but is determined never to condescend to speak to the French ladies in their language. Many of the leading gentlemen, when not talking of tobacco or cotton, find it very amusing to abuse and ridicule French morals, French manners and French houses. …

The suburb St. Mary [Faubourg Ste. Marie, upriver from Canal Street], the American suburb, already exhibits the flat, dull, dingy character of Market Street in Philadelphia instead of the motley and picturesque effect of the stuccoed French buildings of the city. We shall introduce many grand and profitable improvements, but they will take the place of much elegance, ease, and some convenience. (3)

In 1821, the Louisiana Supreme Court announced a new regulation. Lawyers applying to practice in the state would have to demonstrate fluency in English. The Louisiana Courier called the rule “insulting and vexatious for the ancient population of this state,” and grumbled about “certain people who abhor everything that is French and who would like to see annihilated everything which preserves any recollection of it.” (4)

We ought no longer to dissemble, the days of forbearance are over. Our prudence, our patience become every day more fatal to us. … The object of the rule in question is, on one side, to cover the deficiency of certain Judges who occupy exalted stations, without knowing any other but the English language, and on the other to Americanize the bar, by admitting none but men born in the English speaking states (for who can hope to undergo a rigorous examination on scientific matters in a language which he has lately learned?), who, with a few Frenchmen, proud of speaking broken English and ashamed of speaking their mother language, will facilitate the introduction of that common law so long wished for…. But let those who are so anxious to found that Babylon, well remember that we are the first and the old population of the state, as the Quakers are of Pennsylvania, and that, like them, and our other brethren of the union, we shall know how to cause our primitive rights to be respected. Let them be aware that we can in an instant annihilate the imprudent innovators who should try to deprive us of those rights. (5)

As noted in my post about French Consul François Guillemin, when Alexis de Tocqueville visited New Orleans a decade later “almost all the land in Louisiana was still in French (Creole) hands, though big business belonged to the Americans.” (6)

When asked whether there was bitterness between the French and the Americans, Guillemin told Tocqueville:

Each criticizes the other. They do not see each other much, but at bottom there is no real hostility. (7)

I have written about several Bonapartists who were in New Orleans in 1821 and feature in Napoleon in America, including Louis Lauret, Félix Formento, Charles Lallemand and Jean Joseph Amable Humbert. One I have not yet mentioned is Lauret’s friend Honoré Fanchon. Little is known about him, except that he was a Napoleonic officer who was at the Champ d’Asile in Texas in 1818. He must have been in the United States in June 1820, as his name appeared on the list of colonists who were to receive the funds collected by the French newspaper La Minerve (colonists who had left the country were ineligible). The New Orleans City Directory of 1822 lists a Françoise Fanchon as a trader at 152 Burgundy Street. I thus decided to make Fanchon a New Orleans shopkeeper, and to give him a wife. Though we don’t meet her in the novel, her skirt can be seen through a doorway. Her presence influences Fanchon’s decision about whether to join Napoleon on his new adventure.

What is good and bad in the French manners and opinions must give way, and the American notions of right and wrong, of convenience and inconvenience, will take their place.